While You Were Out

by by Nupur Shridhar

1. We Can Program Ourselves to Just Say No

As the winter grinds on and your New Year’s resolve to kick your nasty 2k9 habits falters, fear not—scientists have come out with a glut of new research that could help the addicted.

Scientists at the National Institute on Drug Abuse (NIDA) figured out a way to make mice stop jonesing for cocaine by tweaking their epigenomes. “What’re those?!,” you might ask. Well, if our genome is the hardware of our cells, our underlying genetic potential, then epigenomes are the software. They turn sections of the genome on or off. The newest research in the field has changed how everyone thinks about genetics, since we can change epigenomes relatively easily. Using the genetic equivalent of non-invasive surgery (simply applying a certain type of chemical to the epigenomes), we can change how our genes express themselves.

The NIDA group found that chronic cocaine use in mice actually changes their epigenetics, making them more prone to staying addicted. So, they tried injecting the mice with chemicals they thought would reverse coke’s effects, and hey presto—the genes went back to normal and the mice quit the nose candy. It’s not included in the report, but one imagines that they also left their jobs on Wall Street and returned to their former lives, harassing housecats and lusting after hunks of gouda.

The researchers then repeated the exercise but would put a toy in the saline corner—a sock, some PVC pipe, some balled up newspaper, whatever. As a result, when the rats who’d gotten a low-to-medium dose of coke later had to choose between coke room or saline room, they spent equal time in both, looking forward to something new as much as the memory of their Bolivian marching powder.The researchers concluded that the same could work with “scuba diving, mountain climbing, whitewater rafting, and snow skiing” (the human equivalent of socks, PVC pipes, and old newspaper), successfully stopping ex-addict relapses when confronted with the remembrances of good times past.

For those who, in scientific terms, prefer sauce to snow, booze to blow, and slurping to snorting, a team from the Scripps Institute has potentially helpful news: addiction isn’t only based on wanting another dose of drugs, wanting to avoid the stress of withdrawal is just as powerful. Maria Roberto, the study’s leader, explained in a press release that its aim was to explore the “dark side” of alcohol addiction, “the compulsion to drink, not because it’s pleasurable…but because it relieves the anxiety generated by abstinence and the stressful effects of withdrawal.” Specifically, one stress hormone called CRF drives suffering sots back to the bar to calm down. When the team put the alcoholic rats on CRF blocking anti-anxiety meds, the tippling test subjects returned to moderate consumption.

Roberto also noted the implication of her study for its inverse—stress and anxiety leading to alcoholism. One more reason why taking three classes, and soaking in the occasional bubble bath are a good idea—less stress could help save on your bar tabs a few years down the line.

Researchers from the Robert Koch Institute in Berlin recently came to a rather obvious conclusion: social status strongly influences individual health. After 18 years of telephoneinterviews, the German team, which published its results in last month’s issue of Deutsches Ärzteblatt International, discovered that poor men are more likely to smoke and to be physically inactive. Same goes for poor women, who light up just as frequently and are even more likely to be obese. Cigarettes, it turns out, aren’t just bad for us; as many health education activists have been saying for decades, they’ve also managed to sicken the people who were worse off in the first place.

Yet there’s something truly remarkable about nicotine’s ability to attract such a wide range of smokers. Everyone—from homeless nurses to unemployed college graduates—seems to enjoy boosting their dopamine levels—and honestly, who can blame them? This is the 21st century. We know tobacco is addictive and we know tobacco kills, and we’re going to smoke anyway, dammit, because life is hard and cigarettes feel good and because we’ve all got death wishes that deserve to be acknowledged.

My aunt from Bangalore explained it this way: “I don’t know what to tell these young people, who are smoking, laughing, not remembering that for others a cigarette is breakfast, lunch, dinner. Their chaiwalla is smoking because his stomach hurts and he has no food, but if I remind them of that, they become sad or they become angry with me—and whenever they are sad or angry, I know they will want another cigarette.” She shakes her head. “What can you do? The world is an unfair place. When it comes to cigarettes, at least it is fair that anyone can have one.”

In an attempt to describe their work with light beams in terms readily understood by mere humans, scientists from the University of Bristol turned to a somewhat confusing phrase: they’ve managed to capture beams of light and tie them into “isolated optical vortex knots,” like the one pictured below.

What did the researchers actually do? For starters, they kind of almost did tie light into knots: led by Dr. Miles Padgett, the team, which described its success in last month’s issue of Nature Physics, found a concrete application for Knot Theory, a branch of mathematics previously considered perfectly abstract. Using advanced hologram technology and equations I don’t understand, the scientists twisted light beams to create optical vortices—spaces where the light waves interfere with one another, canceling each other out, making black from bright.

It’s a remarkable visual feat, to be sure, but my first instinct was to wonder if our money really ought to be going towards fancy tricks with computers and laser fields. This isn’t to say that science doesn’t deserve the much-needed attention and funding it’s receiving under the Obama administration. If anything, we—and here I mean we Americans—need more scientists, more science writers, more science programs, science classrooms, science teachers, and science enthusiasts. Maybe if I knew a little more physics, if didn’t skip over the Science Times more often than not, if I hadn’t dropped Orgo just because I could, I would be able to understand why optical vortices research might someday play a crucial role in designing better laser devices.

4. We Can Turn Skin Into Brains

By Biblical standards, the research coming out of Stanford is miraculous. Yes, Jesus turned water into wine, saving a few awkward dancers the pain of self-consciousness when their least-favorite cousin dragged them onto the floor, but scientists at the Stanford University School of Medicine have turned mouse skin cells directly into neurons without an intermediate stem cell state! A little wordier than the messianic feat, but they changed a specialized adult cell into another type of specialized adult cell, both fully functional, with the application of just three genes. This is the death blow to the theory that the move from embryonic stem cell to adult cell is a one-way process and as Marius Wernig, one of the scientists on the team noted, “tips our ideas about epigenetic regulation upside-down.” 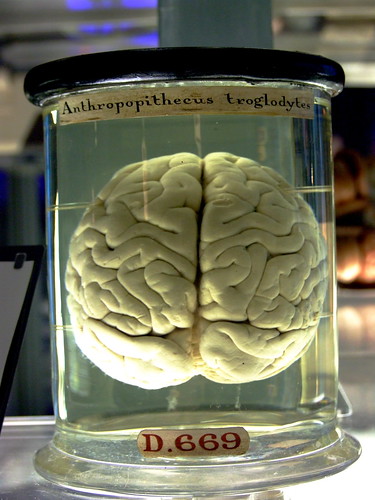 Now, you may not have thought about tipping our epigenetic regulation, per se, but the idea that our cells don’t have to be the way they are—our skin can be turned into brain tissue if we get in a bad car crash, our muscle tissue can be turned into bone marrow if we get leukemia, some stomach tissue can replace our dying liver—is the stuff of superhero comics and sci-fi medicine. In the short term, this will help patients with the early signs of diseases like Parkinson’s or Alzheimer’s: instead of having to get neuron samples with invasive surgery or fuzzy fMRI imaging, scientists can now snag a few skin cells, turn them into neurons, and see how genetically identical neurons work in the lab.

As with anything mind-bogglingly cool, if appropriated for evil, there could be a whole new field of not simply biological but genetic weapons in the making, turning our skin to bone, for example, in a matter of days. On the plus side (and more concretely), it’ll get religious fundamentalists who oppose stem cell research for its embryonic involvement off science’s back. Although the process using intermediate stem cells wasn’t nearly as reliable, even if it ignored embryos, the new process might bring up even thornier theological questions for the devout. It need hardly be noted how drastically this also upends the economic realities of zombie apocalypse, since we might soon have a fast and cheap way to grow delicious brains from any cells, removing the need for attacks on living humans.

Nupur Shridhar B’11 is going to smoke anyway, dammit, and
Sam Dean B’10 prefers slurping to snorting.