Up In the Air

illustration by by Alex Ronan 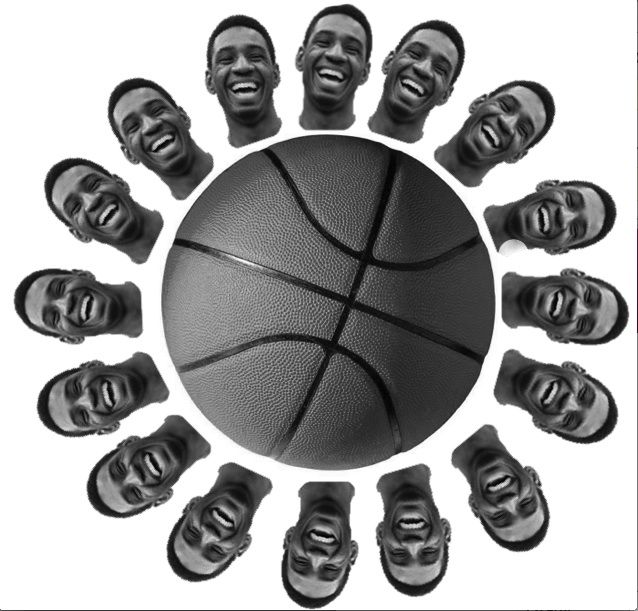 “I'm not quite sure I believe the final shot, though” Roger Ebert said of Love and Basketball’s climax. Too cinematic, perhaps. But isn’t there always an alliterative ease to sports. Two-handed heave. Buzzer-beater. Nothing but net. And yet, the whole thing defies descriptions, or at least one so simple.

People in White Plains are excited. There’s less than point one seconds on the clock. Khalil Edney says that his mother, dead of cancer, watches over him while he plays. The story is licked up, clicked.

Both the teams circle up on the courts, whooping and hugging, slapping backs and smiling. One pinches his jersey away off his chest so the number is clear. One. But the shot counts, the team loses, and the losers win.—AR

“I...I did it out of love, love of the game.” His heart did not feel like the Romantic Organ. “I had to put the team on my back.” Instead it was something of an engorged fist, pounding the brittle sticks of his ribs. “It…it just happened.” Sweat slicked down his adam’s apple onto the wooden floor. His Air Jordans bathed in the sticky perspiration. “It came out of nowhere.”

It’s hard to perform in front of an audience. The crackling wash of their shouts, the smear of waving arms against the white walls. What matters is the clock. The impending buzzer’s scream. Beat it. Beat it. Beat it.

“They checked the tape. It left my hands .1 seconds left” Adrenaline unborders the body. Pain is like a footnote to the situation, a distant comment. “All I did was throw the ball” The ball broke through the rim and seemed to scream from a thousand mouths. Of course it was the crowd. The gym erupted in a leather-throated cry. Disbelief. Ecstasy. Then, confusion. Was it enough? Did it leave his hands in time?  “But I knew it was goin’ in.”

The tension builds all game, mounting toward the final moment of release. That one sweet stroke to bring them to their knees. To send them into the miasma of the locker room with their heads down. They lumber onto the bus for the limp ride home. The opponents, that is. The other team stews in the electric warmth of The Big W. Tomorrow it will be a number, one more win in the left column, but tonight it engulfs them. —GN

There are people who listen to songs about a love triangle and cannot help but identify with the one left out. It’s that same phenomenon that keeps my eyes fixed on Devonte Banner. To find out who he is I had to watch the clip, pause it as he pivots to pass so that I could see his jersey number, and use the #20 to find him on the Mt. Vernon Basketball website. I was relieved to see that he’s only a junior because that horrible decision won’t be the last play of his career.

The thing about the shot is that, in and of itself, it’s not that incredible. As much as a buzzer-beating-half-court heave to beat the perennial juggernaut in the championship game can be “not that incredible.” What is incredible is the sequence, the way two opponents together created an outcome that neither one could have pulled off himself. In under three seconds there’s a pass, a steal, another pass, another steal, and the shot. It takes more time to read a description of what happened than it took for it to actually happen.

But none of it had to happen. Banner, the player who made the game-winning steal and then gave it right back, just had to hold on to the ball. Virtually none of the stories about this shot mention Devonte Banner, but we all understand that he’s the reason this game will be remembered. It’s so simple that it sounds like it must be some kind of trap. Just hold the ball and your team wins the championship. This has probably been a rough week for Devonte Banner. Next winter someone will mention this shot and I’ll go look up Devonte’s stats. I hope he’ll be having a great season.—SR