A conversation with Rashaun Mitchell 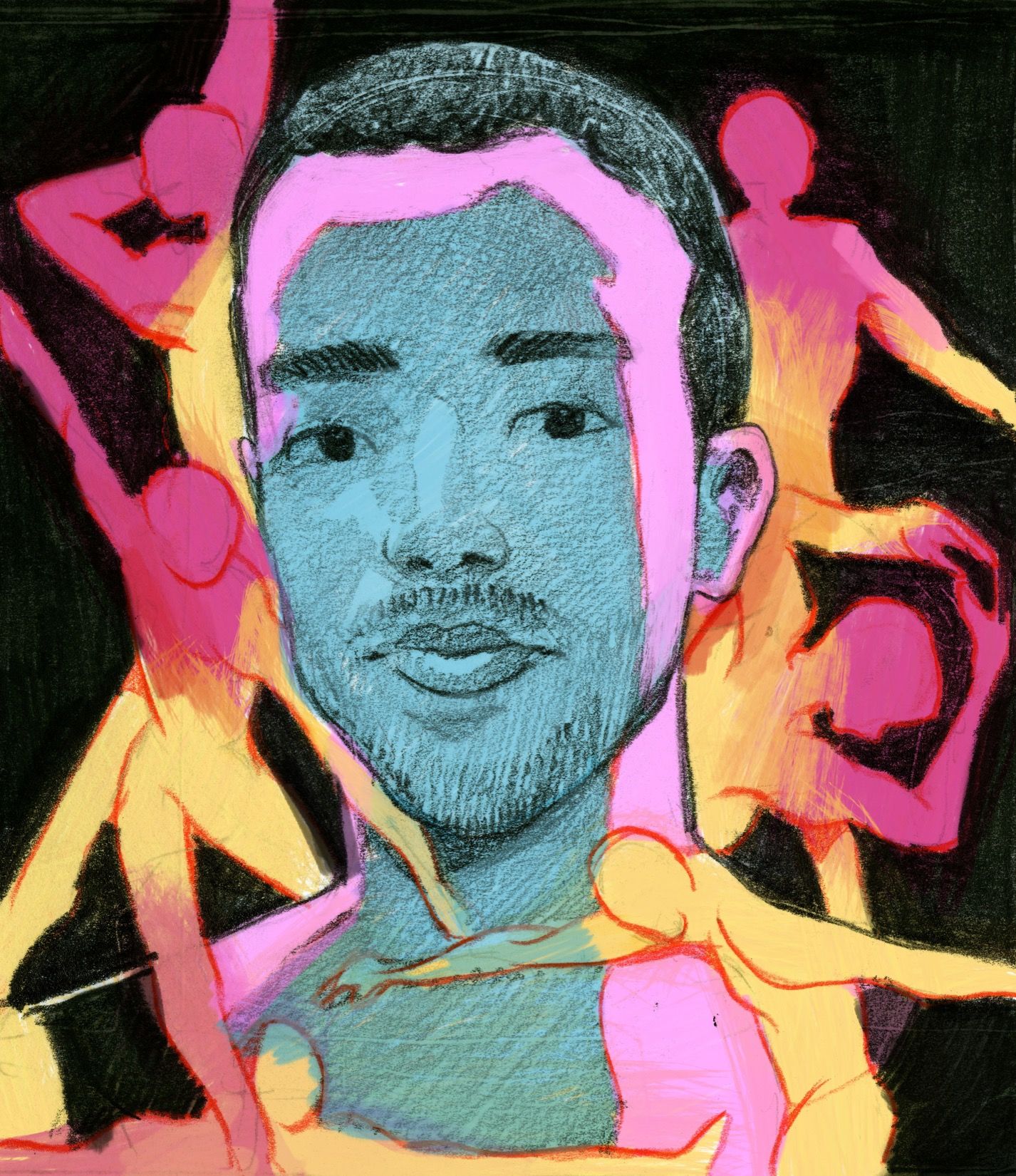 As Rashaun Mitchell speaks to me over the phone I can make out below his voice the faint familiar hum of New York City, a truck passing, an occasional shout. Mitchell apologizes for the background noise, but he has a way of breaking down artistic concepts that makes a discussion of embodiment feel as natural during a stroll down the sidewalk as it might in a dance studio. This skill is deeply fitting for Mitchell, a choreographer especially committed to inverting, translating, and re-contextualizing modern dance. Four years ago, Mitchell’s choreographic career was launched by performance of his first major piece, Nox, a collaboration with the poet Anne Carson based on her 2010 book of the same name. The result was a piece that unfolded darkly and at times violently in the bodies of Mitchell and his partner Silas Riener. Mitchell and Riener’s most recent piece, Horizon Events, performed last winter at MoMA, continues to investigate similar questions of interplay between forms and the limits of intimacy. While both Mitchell and Riener got their starts through multi-year stints as dancers in the prestigious Merce Cunningham Dance Company, the pair have since emerged as some of the newest choreographic voices and bodies pushing American dance forward. Mitchell spoke to the Independent about translation, subversion, and getting lost on purpose.

The College Hill Independent: It’s now been four years since the premier of Nox. Could you speak a little in hindsight about what that experience was for you and how, as one of your first major pieces, it influenced your choreography going forward? How has your interest in translating and playing with various artistic forms evolved since then?

Rashaun Mitchell: Well that piece was the first [full-length] work I had ever done, and in many ways I was groping in the dark most of the time and working intuitively and just trying not to, well, fuck it up. It ended up being a really huge success, which was a surprise to me. I did another work the next year with a different poet named Claudia La Rocco, who was also a New York Times dance critic. What we wanted to do was create something that had a little bit more awareness of itself than Nox, which felt like a really pure expression of a thing that had existed already, and that we were trying to translate into dance. We wanted to do text again but this time let the text be produced by the movement or be in response to what we were doing. We were aware of the fact that Silas and I were in a romantic relationship and we were collaborating as artists, so it felt necessary to deal head on with our personal lives as they related to the work that we were making. So that was an interesting reversal of the process of translation, because I feel that dance is kind of a bastard art form; there’s this pervasive feeling that dance is supposed to illustrate something other than itself. It was important to me that all of the content be generated from the body, and that the text then build a kind of frame around what we were doing. I think we continue to talk about translation as a really important tool or way to think about what we’re doing. Because as much as I love dance on its own, it’s always part of a larger context. There’s no such thing as pure abstract dance, because there are humans doing it. The pure fact that there are humans doing this work means that you have to take into account all of the things that a human represents. There is still a lot of translation in what we do, but of a different form, not always text-based.

The Indy: You and Silas seem to be very interested in the creation of both physical and emotional intimacy on stage, and the relationship between performance and intimacy. You wrote that your most recent piece, Horizon Events, is an exploration of queer framings of space. Do those two subjects interplay at all? Does your personal relationship with Silas function to enable that intimacy and exploration?

RM: I think in general it’s a very intimate thing to actually share yourself with people, which is what we’re doing as performers. There is something very vulnerable about the action of getting in front of people and opening yourself up to criticism, to objectification. On some level all performance deals with a kind of intimacy and a kind of vulnerability. But I suppose because Silas and I are lovers and we are collaborators, there is an inherent kind of interest in partnership and collaboration, how one person can affect another, and a notion of expanding the self, blurring the border between self and other, merging the self until authorship and autonomy become these questionable nebulous things. What we do is take things that might be recognizable and try to shift them, sometimes in a dramatic way and sometimes subtly, but just enough so that we render them slightly askew. For me that reorientation of something that is known is itself a kind of queer framing; but you have to understand the tradition and conventions you’re working in in order to actually stretch those boundaries. So we do still train in a really traditional way, and we try to take all of those accumulated skills and reorient them somehow. That’s what we mean when we talk about the queer framings of that piece. And of course our partnership allows us to explore things that would maybe be difficult for someone else to explore just because of the fact that we’re already so intimate with each other, we can go into places that might be vulnerable, because we’re protecting each other inside of those places.

The Indy: I read that as part of the process for your 2013 piece Interface you took your dancers on a silent hike in the woods of rural Connecticut. Could you tell me a little more about your motives for doing that and how it worked out?

RM: Well again I was trying to explore something that I didn’t know, and I didn’t exactly know how to get to a place that was unknown, and I thought I would create an experience where nobody knew what was happening. I think I have these utopian ideas about dance as a place where, collectively, we can achieve these things that we can’t necessarily achieve on our own, that we can arrive at these places and stretch ourselves spiritually and physically and mentally. So sometimes when I’m working with a group, particularly, I’m trying to locate this place where we can bond and create a sense of trust around what we’re doing so we can really truly experiment without fear. We were doing a residency in Mystic, Connecticut, and I wanted to go out and hike and explore and try to let the environment seep into our consciousness, into our bodies. So I decided that we would go for a walk and I told everyone: I’m going to lead us into the woods, and then at some point each person has to take the lead. We will not speak to each other at all, this will be felt, we will have to somehow intuitively understand when the next person is taking the lead, and we might get lost, but we have to somehow find our way back. I didn’t think that it would be such a dramatic thing, but it really turned out to crack a lot of people open, there were tears. I think people have a sense of certainty in a studio, there are four walls, you come in and you know the arc of a rehearsal. But when you go out into the world, when you go out into the wilderness, there are all of these unknowns. I think that sense of being lost made people feel very vulnerable. It kind of opened up these emotions, but then we improvised immediately after. It turned out to be a really beautiful week, and I think that there would have definitely been a different color to the piece had we not done that.

The Indy: On that note of taking dance out of the studio, you’ve done a fair amount of work with public performance. Dance, particularly contemporary dance as a form, is often seen as very removed, as esoteric or elite. What value do you see in taking dance into the public space?

RM: Well I think it’s so strange that it’s thought of as this elite remote thing because dancing is the most innate thing that we have as humans, and in most cultures dancing is so much a part of the way of life and the way people are raised. Dance in public spaces is not a new thing in most countries. I find that it’s a really big absence in our culture, and for someone who has spent so much time training in a studio and dedicating myself to very Western forms of dance, it’s liberating to take dancing outside and connect it to real things. But we’ve also done public performances indoors or in industrial settings as well, and I think the beauty of dance is that it has the ability to absorb so many different things. I could make a piece like Interface for a theater but then I could also consider how it would operate in a very different setting and that gives it new life.

The Indy: It seems to me that you consider the ‘site’ of a piece to include both the physical environment as well as the dancers themselves and their experiences. I’m interested in the way you let your dancers direct your choreography. Where does that come from?

RM: What I’m interested in is considering the person first and then building out from there. So it’s sort of a reversal. I feel inspired by the individual, and it’s really important for me to consider who I’m actually working with. These people sacrifice their lives to give their bodies to someone else’s art, and that for me feels like a really important, devoted thing that I shouldn’t take lightly. So I’m always interested in utilizing an individual’s own kind of native movement and their intuitive responses to create movement. Sometimes that ends up getting organized and specified to the point where it’s repeatable choreography, and sometimes it’s more open. But if it’s going to be open, and if there is going to be choice and improvisation, then it’s my job to ensure that that person is supported enough to make choices that are interesting, deeply felt, and nuanced. So I have to come up with strategies, I have to come up with various kinds of imagery, various kinds of potential choices for them to make so that they feel supported. So it’s not just this ‘okay do whatever you want, I trust you, you’re beautiful, let’s make you look beautiful,’ it’s really like, let’s work every day at getting closer and closer to an idea that is becoming itself as we’re working.