Providence, The Day After 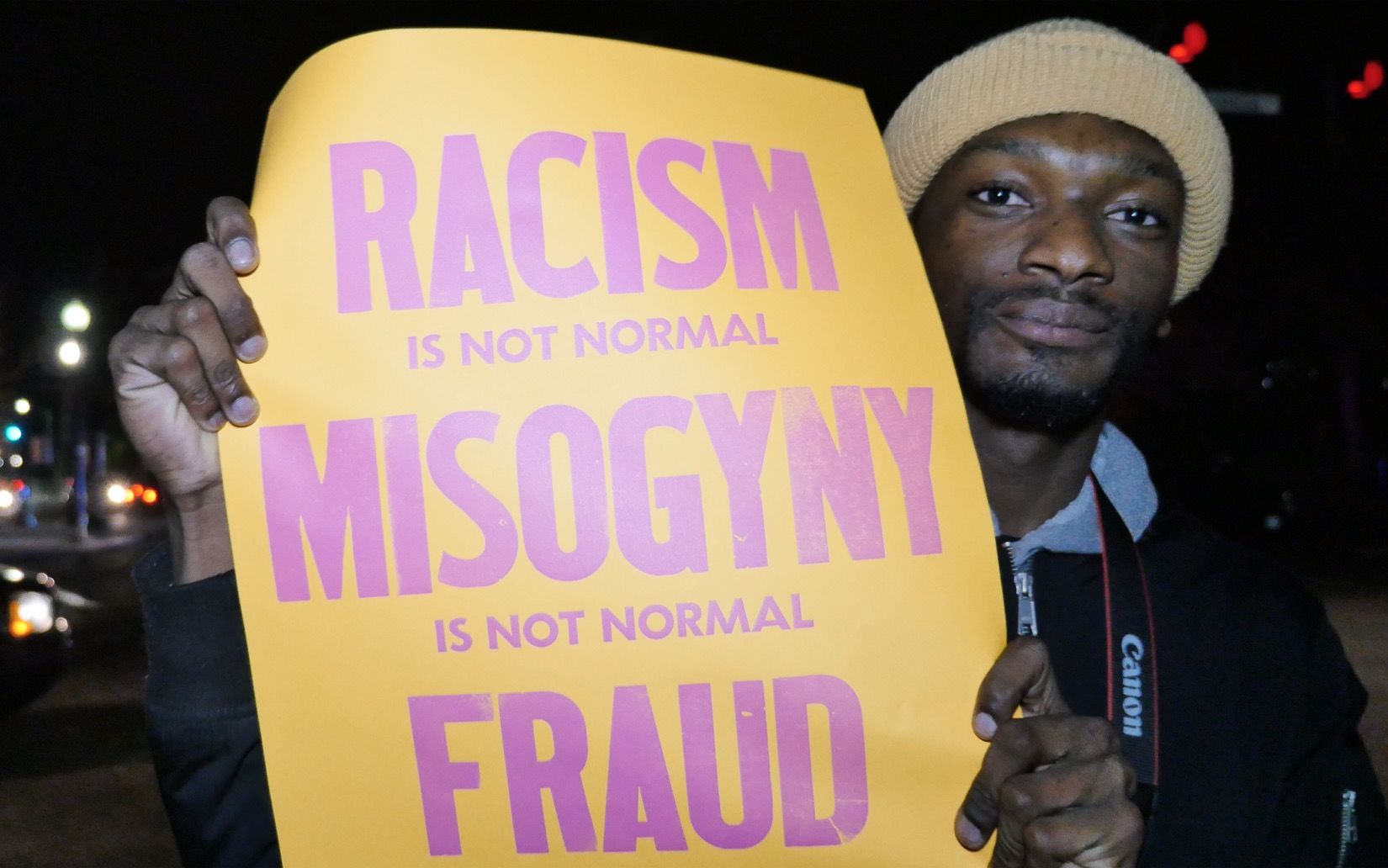 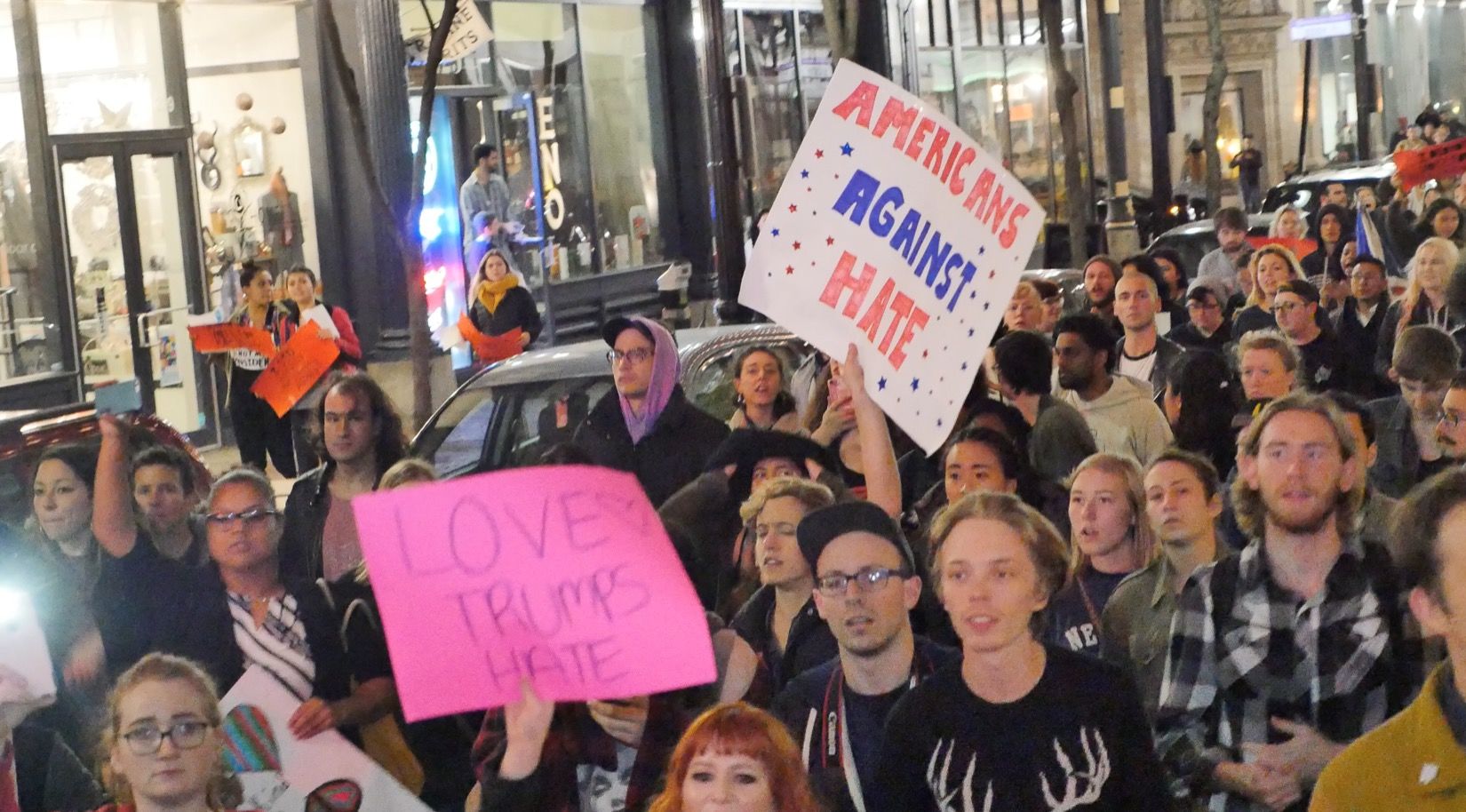 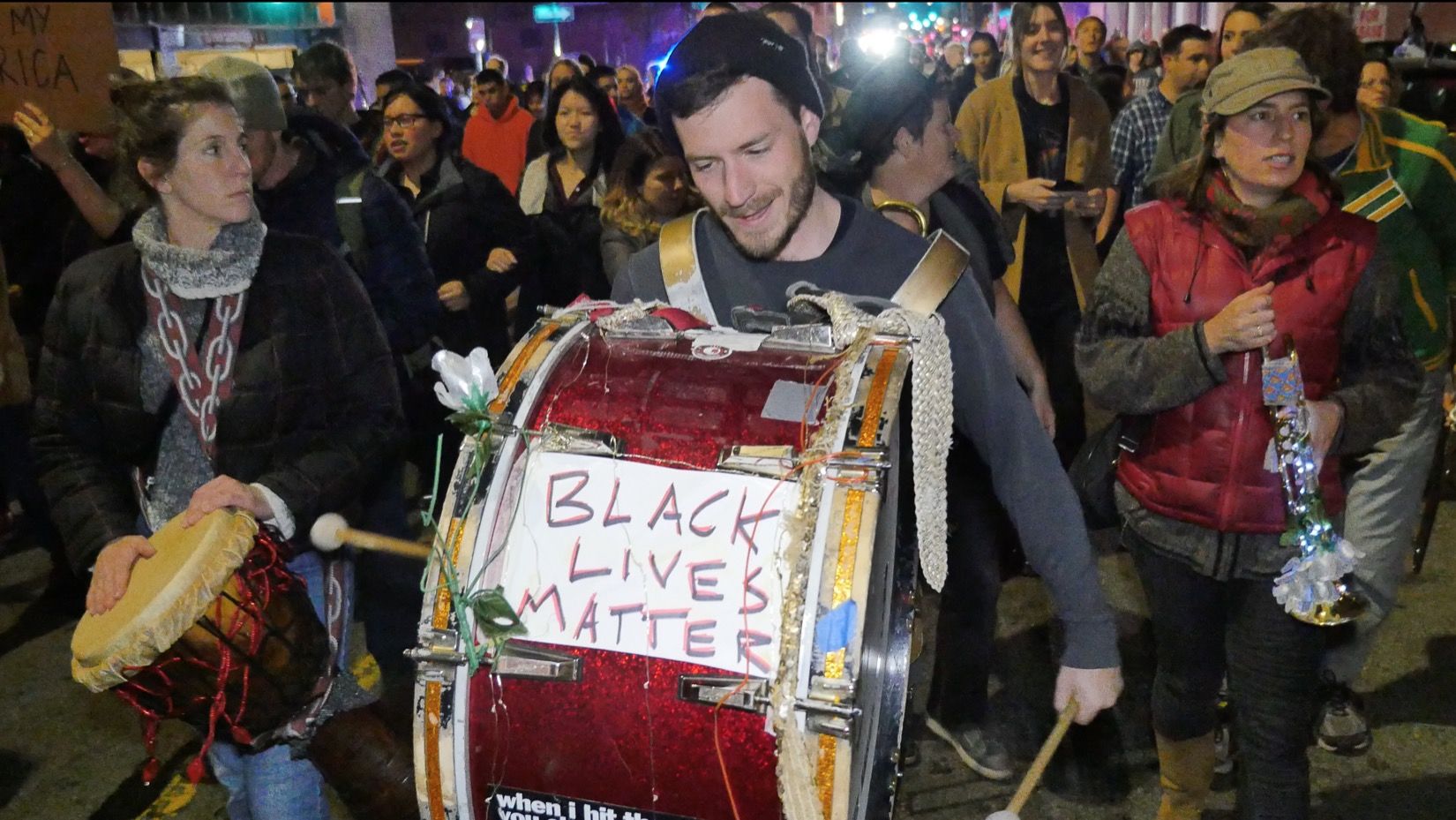 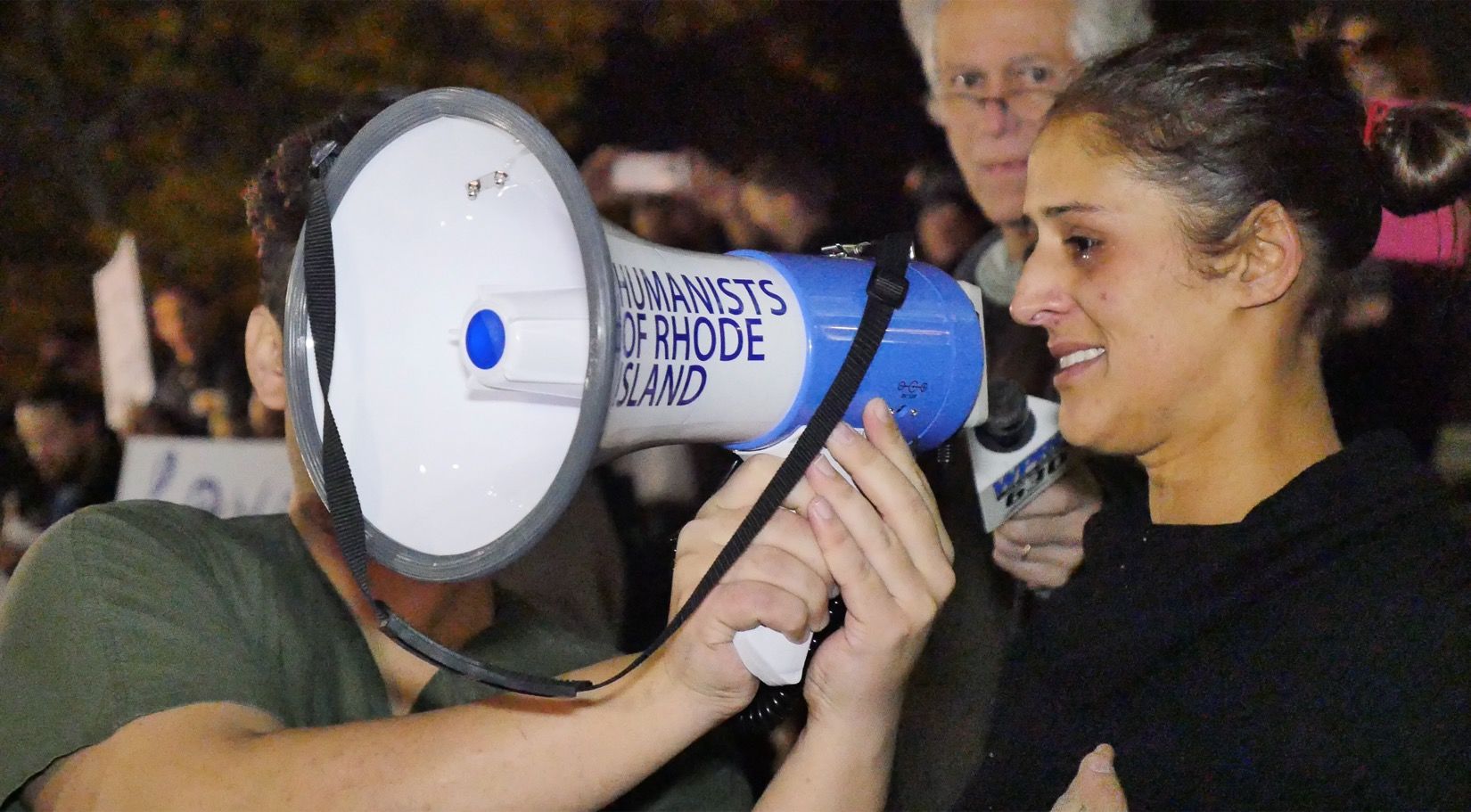 The day after the election, Mary Piñeda, 28, worried about whether or not she would be able to stay in the US.

“I came here to work, it’s better here,” Piñeda said in Spanish. A native of Mexico who came to America 11 months ago on a work permit that expires in two months, Piñeda could not vote, however much she may have wanted to.

“People have a responsibility and an obligation to vote,” she said. “People who can vote should exercise this right. I would have voted for Hillary Clinton, because she has good proposals to help immigrants.”

Looking down at her ten-month-old baby boy, Piñeda teared up. “I have a bit of fear, I’m not sure if I’ll have to return. I’ll have to apply for permission to stay and wait and hope for the best.”

The day after the election, Jasmin Lee, 21, a soon-to-be mother and first-generation Puerto Rican American, anxiously touched her stomach at a bus stop in Kennedy Plaza. She’s been having a difficult time finding work recently, with many employers hesitant to hire her at eight months pregnant. Lee said she’s been relying on the Affordable Care Act to cover the costs of her pregnancy.

“I just came from the WIC office,” Lee said, “and it’s like, maybe in 2017 I won’t get these benefits or I won’t be able to help my child. I feel like he’s going in wanting to change so much, he has such a hate for Obama and Obamacare, and he doesn’t think, maybe there is a girl in Providence, RI who is benefiting from having free health care right now.”

The day after the election, Vatic Tuuama, an art and theatre teacher at AS220, looked at his students and saw their fear and concern, their shock and frustration. But he knew better than to be surprised.

“I grew up in Volusia County, Florida, a majority Republican place that went red this year,” Tuuama said. “I already know this America exists, that nearly 60 million people are capable of proactively supporting racism and homophobia. Trump is the best representative of the underbelly of the system, the middle America-type people who only live in a certain kind of area and don’t accept other viewpoints. I hope this will allow liberals to understand how deeply rooted the problem is; not, ‘Oh, we just had a Black president, let’s put these issues behind us.”

The day after the election, Jeff Frary, 59, sat on a bench in Burnside Park and thought he was going to be a little sick. Despite once attending Brown University, he’s been staying in a shelter in North Providence for the past few years ever since his business—plastic work—caved in. Yet he ignored the siren song of the Trump campaign to help white men like him regain their lost status.

“Trump has a reputation for evading his debts, stiffing contractors—my company, we had a stellar credit record,” Frary said. “We paid everybody on time for 23 years. If I could have stiffed people and weaseled around and found tax loopholes, maybe I would have made more money, but you can’t run a business that way.”

Frary said he remembered the days when Providence was a manufacturing hub and Pawtucket a booming jewelry district, until all the jobs began to fade away. He missed those days, and understood the nostalgia of Trump’s promises, but he saw them as empty.

“He’s promising things to people who are in trouble, but he’s made promises that I don’t think can be fulfilled,” said Frary. “My home is gone, my business is gone, and as of this morning there’s a little less hope in my life.”

The day after the election, Daniel Rivera, 40, remained indifferent and continued to go about his work for the Parks and Recreation department as he always did.

“I really don’t care, I go with the flow, I’m a follower not a leader. So if the country wants to go with Trump, I go with it,” said Rivera, who didn’t vote.

The day after the election, walking through downtown Providence, Anthony Graziano, 33, shook his head at the thought of what had just happened.

“I’ve been a lifelong Republican, this is the first time I’ve voted as a Democrat, and I’m just shocked at how everything went,” Graziano said. “People wanted a change, and I don’t think Hillary tried hard enough. Didn’t visit enough of the states that she thought she had locked down. I wasn’t happy with either candidate but it just seemed like the lesser of two evils. His arrogance is worrisome. He’s a businessman, a celebrity, and he’s got no credentials. If he can be President, anyone can.”

The day after the election made Roberto Colon question what values he will be protecting when he swears in as a Marine on the same day Trump takes office.

“I hope he values America and what we stand for as much as I do,” said Colon, 19. “I don’t want to go into a country where people know our country’s president isn’t the best dude around—they’re going to take their hate for him out on us. If our president stinks, it makes all of us stink. That’s what people will see when they look at us.”

The day after the election, Philip Bonner, 55, worked with his construction crew on the corner of Exchange and Fulton. He felt no dismay. He wasn’t thrilled with Trump, but he was happy it wasn’t Clinton taking office.

“I voted for Donald Trump, yes I did,” Bonner said. “What she pulled in Benghazi, with all them military people getting killed—she dragged her feet. They knew weeks in advance they needed more security and she didn’t provide it for them. We’ll find out what Trump’s made of soon enough, we’ll see how soon until they start constructing that wall; everybody’s going to be heading to the border to get work. We’ll see if they start building that wall, we don’t really need it, but we definitely need some change in this country.”

The day after the election, Andersyn Costa and Cara Bella woke up to the cries of anxious LGBTQ friends and felt compelled to stand up for their friends and everyone else terrified by the prospect of a Trump presidency. They planned a protest, spread through Facebook, with hundreds of residents turning out to the steps of the Rhode Island State House in solidarity.

“We’re just glad that people feel the same way that we feel because there is power in numbers,” said Cara Bella, 25. “Our message will get across; we didn’t do this for riots, to cause an uproar or get him out of office, we just want people to know that a Trump presidency is not okay, and my safety is in jeopardy right now because he is president.”

The day after the election, Mike Auraujo, the executive director of Rhode Island Jobs with Justice, channeled all the rage, insecurity and resentment of the protesters gathered outside the Rhode Island State House.

“Trump is just today’s face of white supremacy,” Auraujo shouted into a megaphone. “This goddamn fight started 50 years ago and every time we get close to the gate, white solidarity crushes working class solidarity.”

The day after the election, Julia Sicut sat in a wheelchair as the crowd from the State House surged forward, led by the Extraordinary Rendition Band and its rallying cry of bass drums and brass.

“I’m a member of the queer community, the disabled community, I’m a woman, and I have extreme disappointment in this country,” said Sicut, 25. “But the one thing I am proud of are those I surround myself with, the people who are here now. I already know people who have already been threatened because of their race or sexual orientation and I think we need to band together and make our voices heard here and that’s why I am here.”

The day after the election, 1,500 people marched from the State House, through Kennedy Plaza, down Westminster Street, past the effigy of Trump somebody had placed outside a shop, over the highway, next to the wall with the scrawled handwriting that read “USA we are fucked,” and right under the balcony of Joe Lian’s house as it went on into the night and the heart of the city.

The day after the election, in Joe Lian’s eyes, seemed like a smack in the face.

“I’m kind of sad,” said Lian, 47, watching the marchers pass under his American flag-draped balcony and heckling them intermittently. “This is a time for the nation to heal and come together and recognize the President; if they don’t like it they got to leave or something.”

The day after the election, for Michelle Cruz, 20, meant affirming compassion and strengthening support for those whom Trump had undercut and threatened with his speech.

“We’re angry and frustrated but this is still a peaceful protest,” said Cruz. “We’re saying love trumps hate, and we’re trying to say that we’re going to this community and showing other people in the Providence community that we’re against Trump, we’re also scared, we’re also frightened, but we’re going to come together and love will trump hate. There are a lot of people who hate marginalized communities, but they are so important for our society and they belong here and they are loved. We’ve gone back 50 years or more with this election. But we’re on the right side. ”