An Interview With Governor Gina Raimondo

On her politics and priorities, past and present 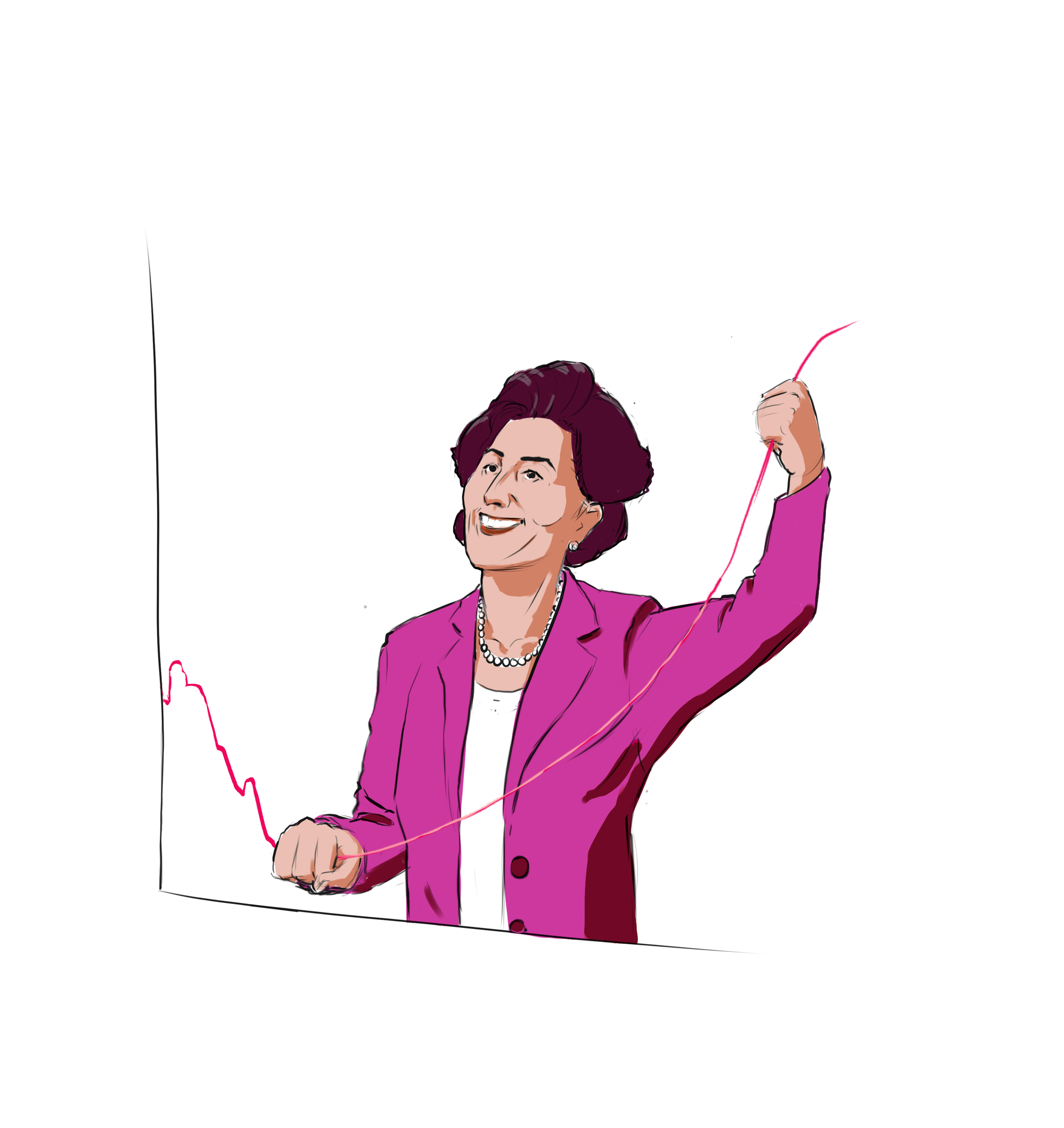 Under the vaulted ceilings of her office in the Rhode Island State House, Governor Gina Raimondo lays out her political priorities in a markedly definite manner, clearly accustomed to being taken seriously. Both from the way she expresses her views, and from her policies themselves, it is clear that her approach to politics is pragmatic and numbers-driven. This is not surprising given her business background—after completing an undergraduate education at Harvard and graduate programs at both Yale and Oxford, Governor Raimondo served as a law clerk before co-founding Rhode Island’s first venture capital firm, Point Judith Capital, in 2000.  First elected to public office in 2011 as General Treasurer for Rhode Island, Governor Raiwas then elected for Governor in 2015.

Governor Gina Raimondo first gained national notoriety when she proposed a groundbreaking pension reform plan as General Treasurer. Her plan attempted to mitigate the pension crisis by combining traditional pensions with 401(k)-style accounts, which are invested in hedge funds. While her seemingly practical solution was lauded as a breakthrough policy in 2011, it ultimately did not succeed, and the Rhode Island pension fund dropped more than half of its hedge fund investments due to limited returns in September 2016.

Entering the Governor’s office in 2015, Governor Raimondo aimed to revitalize the economy and increase opportunity for high-skill job sectors. This approach included raising the minimum wage and implementing programs to attract higher wage job growth, such as initiatives to provide computer science education in public schools. However, over the last year and a half, many of her campaign proposals have been confronted with major setbacks. Although she has succeeded in raising the minimum wage to $9.60, the Rhode Island House has been resistant to implement the Governor’s proposed $10.10 minimum wage. She has been successful in creating new jobs, but upscaling the economy has proven more difficult, as Rhode Island’s median income remains low. These difficulties in implementing her agenda has led Governor Raimondo’s unfavoribility rating to rise to 53%.

In May 2016, the College Hill Independent spoke to Governor Raimondo in her Rhode Island State House office about her first year as Governor and her policy priorities. In a follow-up interview conducted over email in October, the Indy was able to explore how Raimondo’s political approach has evolved over the last six months in office.

Following Donald Trump’s unprecedented victory on Tuesday night, it is important to remember the critical work that is being done on state and local levels.

In May 2016, the College Hill Independent spoke to Governor Raimondo in her Rhode Island State House office.

The College Hill Independent: You have an unusual background for a politician. You decided to run for the State Treasurer after reading in the Providence Journal about public library closures due to state budget difficulties. What does this anecdote say about your approach to politics? How has that approach changed over your political career?

GR: I don’t think it has changed. What it says is that I really do believe that there is an important role for government to play in leveling the playing field and making sure that everyone who wants to work hard has the chance to be successful. This means having public libraries, public buses, well-funded and flourishing public schools, and community colleges so people can get a good education and not be buried in debt. This is not popular. Today, everyone wants to say: “government is the problem, government can’t get anything right.” There’s a lot of bureaucracy and government does certainly make mistakes, but I still think that a well functioning government has a huge role to play in making it so people have a chance.

The Indy: What are the unique challenges currently facing Rhode Island?

GR: Raising the minimum wage was one of the first things I did as Governor. There is certainly a debate, but I come down on the side of wanting to raise the minimum wage even more. Some people worry that it will be bad for the economy, but I do think the evidence is clear that it’s good for the economy. Number one, it’s the right thing to do—you shouldn’t work full time and be living in poverty. But number two, when people get that money, they spend it and that’s a stimulus to the economy.

The Indy: How do you imagine your future political career?

GR: I don’t know. I have a mountain of work ahead of me in Rhode Island. What I want to do in politics is be the Governor of Rhode Island. That’s what I think about.

In October 2016, the College Hill Independent followed up with Governor Raimondo over email about both the successes and setbacks in her agenda, and how the evolving political climate has affected her political priorities.

The Indy: The Rhode Island House vetoed the most recent proposed minimum wage hike this past summer. How do you plan to work around the resistance in the House to achieve your proposed $10.10 minimum wage?

GR: I believe we need to do even more to help hardworking Rhode Islanders. Too many Rhode Islanders are working harder than ever, and making less money. All Rhode Islanders, but especially those who earn the least, deserve to see their wages go up every year. My team is currently working to determine the best course of action on this ahead of the legislative session.

The Indy: State and local governments are a total of $1 trillion short on promised pension benefits, according to PEW Charitable Trusts. As General Treasurer, you proposed a groundbreaking pension reform plan. Although your plan got national attention in 2011, the Rhode Island pension fund dropped more than half of its hedge fund investments in September 2016, undoing much of the work that you did as Treasurer of the state. Why do you think that the hedge fund investments had limited returns? Is there another solution to the national pension crisis?

GR: The pension system is much stronger today than it was when I was first elected Treasurer. Between our pension and Medicaid reforms passed last year, Rhode Island is now able to make record investments in K-12 education and make college more affordable and accessible. Businesses are taking a fresh look at our state because of our more stable, more predictable finances. Treasurer Seth Magaziner and the State Investment Commission are keeping with the strategy of having a diverse mix of investments to protect against risk, and I will continue to support that approach to make sure people’s pensions are there when they need them.

The Indy: What does Donald Trump’s most recent “locker room talk” say about persistent sexism in our country? And as one of six current female governors in the United States, how do you think female politicians should respond to this type of rhetoric?

GR: I’ve said from the beginning: in my mind, Donald Trump is not fit to be president. Those comments only prove that, and the contrast between him and Secretary Clinton couldn’t be clearer. As for what it’s like to be a female politician, I’ve lost count of the number of girls who come up to me to say that seeing a woman in the Governor’s Office makes them feel they can be a leader, too. Sexism is still absolutely persistent, and it’s absolutely still a problem in our state and in our country. But as my mother likes to say, if you want something done, ask a busy woman. I’m working toward a Rhode Island where everyone has opportunity, and no one gets left behind—and that absolutely includes women and girls.

The Indy: Given that you’ve now been in office for almost two years, how has your understanding of governing Rhode Island changed? What unforeseen challenges have you encountered and how have you responded to them?

GR: I’m always pushing to get better, faster results. It’s always a challenge to make government move—our system is designed to move slowly and to resist change. Since taking office, I’ve worked to get the gears moving and make state government work for Rhode Islanders. Sometimes it seems like we’re experiencing fits and starts, but we just have to keep pushing forward. And we’ve definitely had success. Some of our big wins, like bringing GE Digital to Providence with hundreds of high-skill jobs, will lead the news. Others, like the Lean Government Initiative, which works with state agencies to cut away the red tape and get government moving at the speed of business, don’t necessarily get the spotlight, but they’re still incredibly important. We’re laying the foundation that Rhode Island will build upon to be an economic hotspot of innovation and growth for years to come.