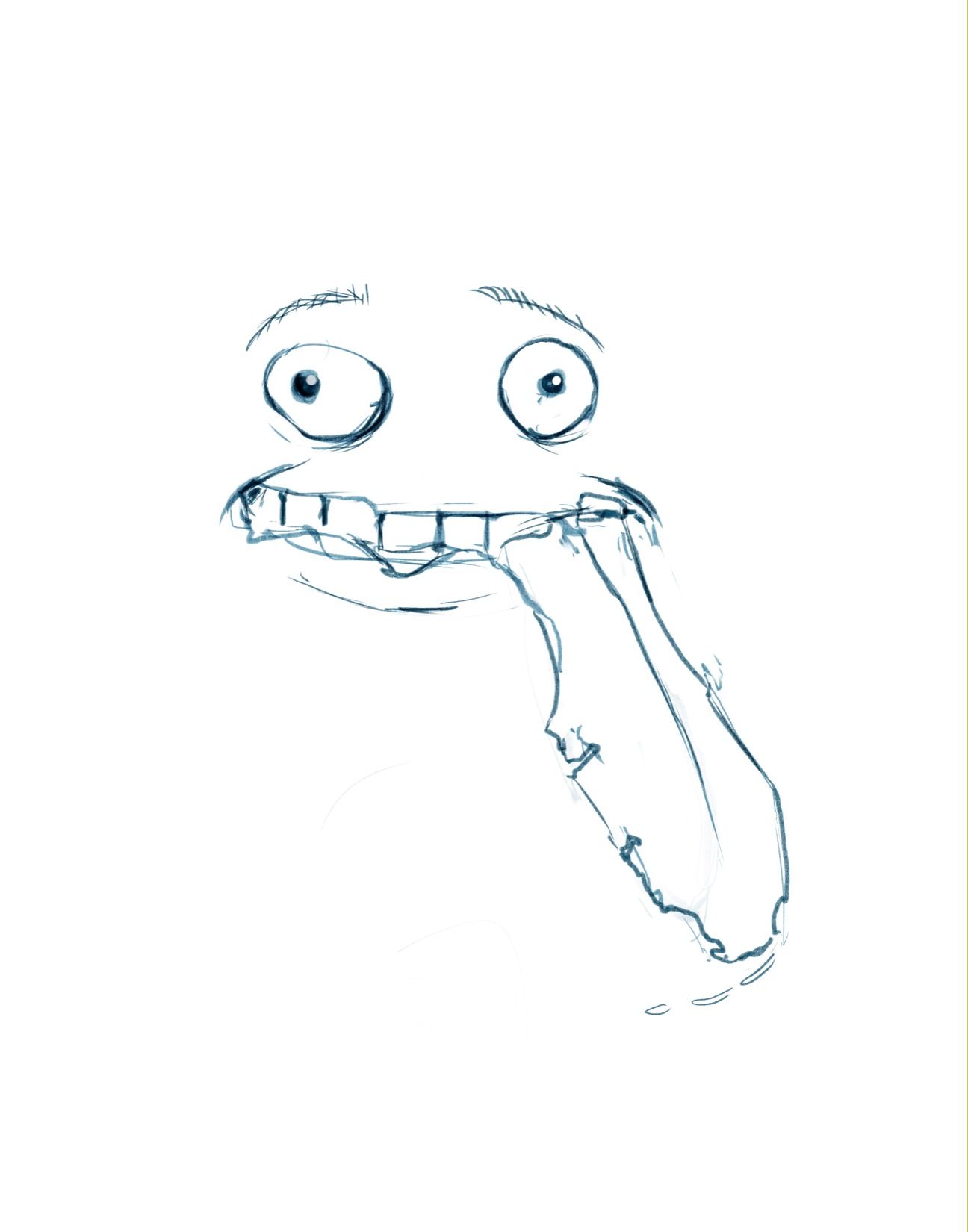 If there is anything we’ve learned to expect from a presidential election year, it is that Florida will inevitably find a way to fuck everything up. Fourth in population size, but first in dysfunction, America’s dingleberry has a coveted 29 electoral votes to give away through the course of its perpetually fraught election processes.

In the 2012 election, an estimated 201,000 Florida voters did not cast their ballots because they were discouraged by long lines; this problem was most pertinent in parts of central Florida with large Latinx communities. Florida also requires voters to possess a state-issued ID to be eligible to vote—a provision that many have likened to a modern poll tax. In previous elections, absentee voter ballots whose signatures did not match those on their driver’s licenses were completely disregarded. This October, Florida offered a solution as half-hearted as someone whose heart has been bitten in half by a alligator: a federal district judge ordered election officials to contact absentee voters whose signatures on their mail did not match the signature on their driver’s licenses and to let them know they would be discarded. Read: absentee ballots can still be thrown away, but the supervisor of elections doesn’t have the authority to ghost you. It’s far from consent, but maybe there’s a little solace in at least knowing when you’re being screwed over.

Florida was the last state to be called in the 2012 election. In some counties, ballots had to be recounted in the days following the election. However, unlike the notorious 2000 election, in which hanging chads and Florida’s general bungling of the voting process determined the fate of the nation, President Obama didn’t need Florida to secure the nomination. For once we could watch the embarrassment unfold with nothing more than aggravated amusement.

This year, our tackiest state once again has the potential to determine the outcome of the presidential election. When this paper went to print on Wednesday night, FiveThirtyEight’s election forecast showed Trump leading Clinton by about one point. Trump needs Florida to have a chance at victory. While polls are not necessarily predictive of the final outcome, Trump could win the election with the help of the state famous for stories about residents chasing gators and biting off each other’s faces. In an election year where the prospects seem demoralizing across the board, it seems that the only solution may be to travel back in time to the beginning of the 19th century to stop the US from taking Florida from the Spanish. Or better yet, stop Columbus from stumbling into the Americas in the first place. 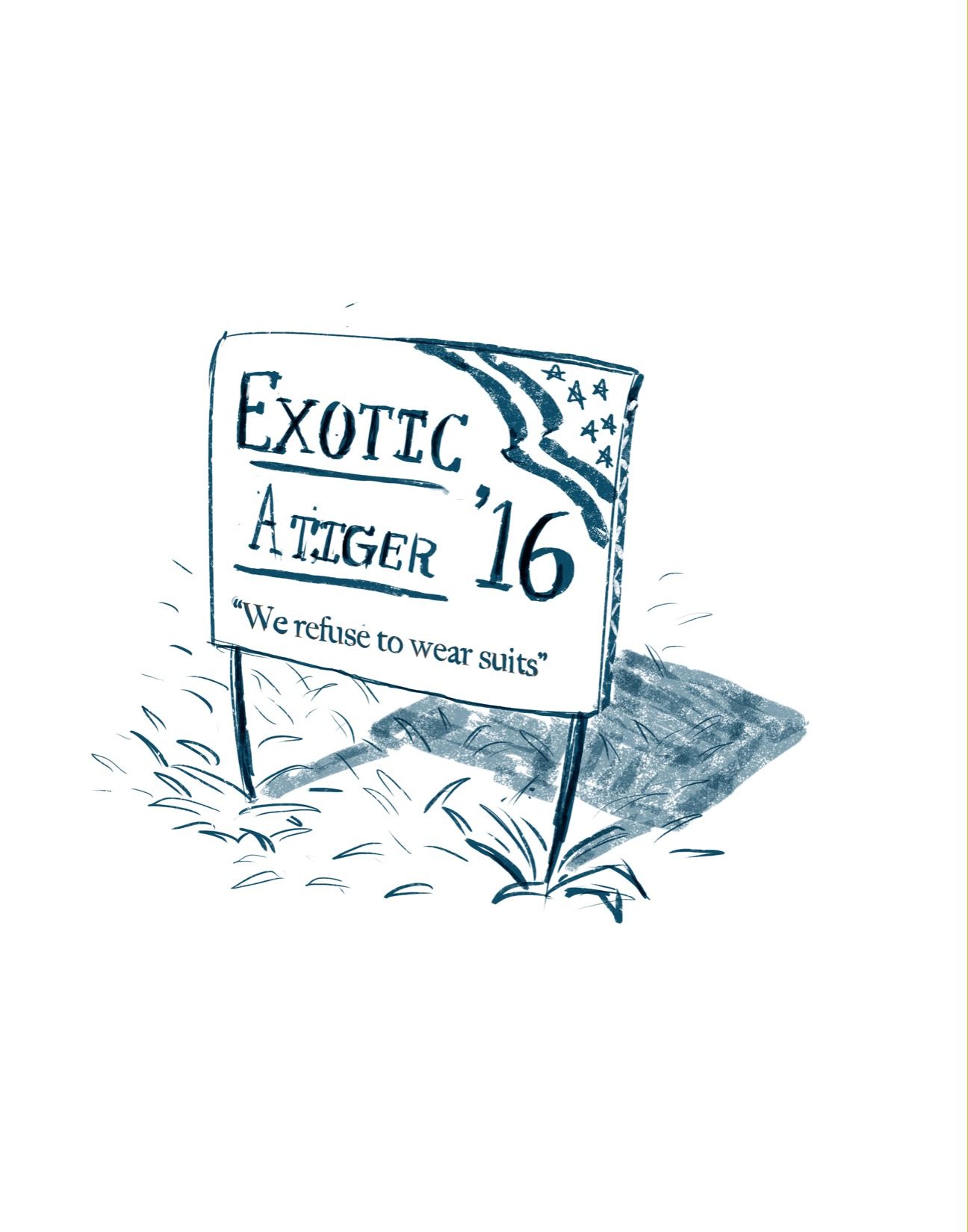 We need a leader who understands the People. A leader who can shake up Washington, a maverick who WILL bring change. It is our civic duty to vote, and so we as Americans have to make the right choice. I’m not talking about a cretin in a pantsuit, or a snivelous orange blob that spews racist obscenities.

No, I’m looking for someone better—a transcendent individual, the kind we’ll one day be able to put on our currency or carve into Mount Rushmore. If you’re wondering where on Earth you could find such a person, I say look no further than the Greater Wynnewood Exotic Animal Park. There you will encounter Joe Exotic, a man who sleeps with tigers, carries a pistol on a holster slung around his waist, rocks a dyed blonde mullet, and wears buckskin pants.

For over a year, Joe Exotic has been launching a grassroots campaign through a series of Youtube videos, laying out his plan to take over Washington and return the power to the People: “First thing is, I’m not cutting my hair, I’m not changing the way I dress—I refuse to wear a suit.”

Along with increased protections for the owners of exotic pets his campaign offers a promise to resurrect the voice of the middle class citizen through his slogan, “It’s About Everyone.” He also offers a chance to revolutionize the whole goddamn system. “Ever created the real change?” he asks on his website, JoeExotic2016.com.

“The dude has cancer,” says an official Joe Exotic media spokesperson. “But he’s still planning on going to Congress and shit. He wants to do what he can for these people, for real.”

But Joe Exotic is not perfect. It’s true that the Humane Society has characterized his zoo as “a ticking time bomb” (“If somebody thinks they’re going to walk in here and take my animals away, it’s going to be a small Waco,” Joe retorted), he has been ordered to pay the Big Cat Rescue sanctuary one million dollars for stealing their logo, and yes, he also once threw “Tiger King” condoms into a crowd of grandmothers and small children at a zoo show.

Yet supporters of Joe Exotic continue to rave about him on the comments section of his website, and it’s hard not to get swept along in the excitement.

Kaycee from Fuquay Varina gushes: “Joe will really be able to change America for the better!”

Carla from Millbury writes: “He means business; He is one great honest person!!!!”

Joe from Findlay adds: “I guess I could say you sir are one lucky motherfucker, cause your [sic] still here speaking out against Washington, the Politicians and others. I’m surprised someone hasn’t tried assassinating you. However, I do expect them to.”

Lisa from Kansas, perhaps the most pragmatic of the bunch, offers her thoughts: “What I’d like to see is Joe run in 2020 so he can have 4 years to prepare and be taken seriously. I think if he were to hold a 4 year fundraising campaign he could be one of the front runners in 2020. Otherwise, I feel like this short campaign for 2016 will be a wasted vote for many.”

To this claim, Joe responds: “Don’t count me out just yet. There is not one Candidate right now looking out for you as an American Citizen except me.”

This past June, writer Dave Eggers recognized the sweet pitter-patter opening of Elton John’s classic “Tiny Dancer”—playing to a crowd of Trump supporters at a rally, who probably just wanted to hear their favorite Ted Nugent rippers anyway. Afterward, Eggers told The Guardian how absurd it was that Trump has made it common practice to use artists’ music without their permission. Eggers (of McSweeney’s fame) decided it was an opportune time for the “resurrection of the political protest song.” He reached out to all his musical friends—Aimee Mann, Andrew St. James, and Death Cab for Cutie among them—and enlisted them in a 30-day project called 30 Days, 30 Songs that would release one song each day until the election. The catch: he would only recruit musicians who agreed to make music that supported “a Trump-free America.”

Eggers told Vogue that the songs might, upon first listen, “sound benign to Trump supporters, but if you listen closely, they’d all be puncturing that inflated horror of an ego he has.”

You don’t have to listen too closely to clipping.’s “Fat Fingers,” released on day 25 of the project, to hear the perforation of Donald’s psyche: “First off fuck your tricks and the clique you claim / How an uncredentialed rapist even get in the game / Can’t relate to shit cause his life been too kushy / And keep grabbing vaginas cause won’t no one give him pussy.”

To top it off, the lyric video backdrop is footage from the destruction of Donald Trump’s Hollywood Star. So subtle, so savage.

“We are all suffering from collective post-traumatic stress from this election…but right now, while we while we’re cowering in a corner and sweating profusely… these songs can give you some succor and a moment of calm. Some of the songs you can even dance to,” Eggers told Vogue.

If you’re looking to boogie in the polling booth this Tuesday, or put together a pithy little pre-game playlist, the Indy recommends checking out Bhi Bhiman’s “With Love from Russia,” Franz Ferdinand’s “Demagogue,” and El Vy’s “Are These My Jets.”

We do, however, regret the exclusion of Elton John’s classic croonings from the project.