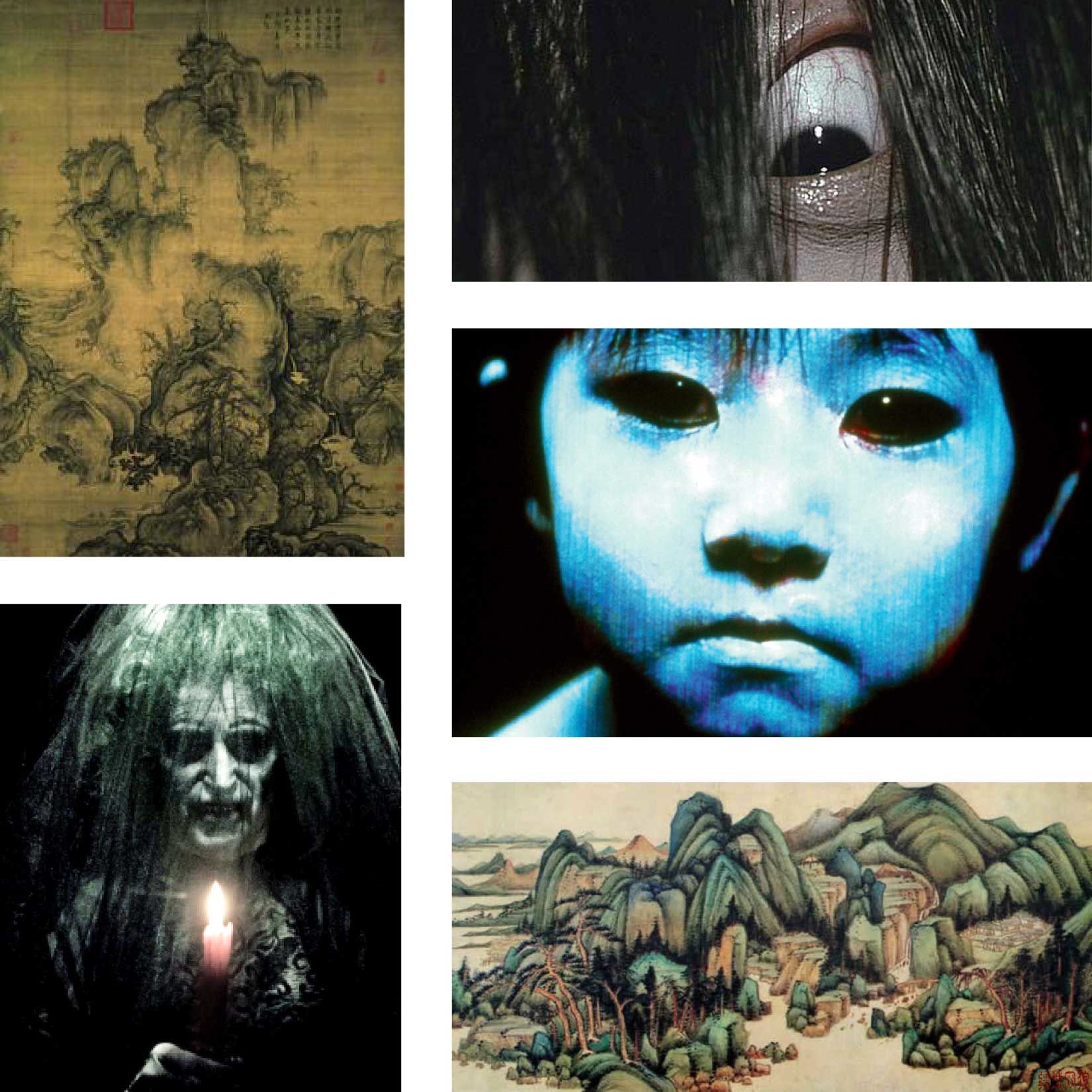 There was once a cook who was much revered for his mastery with knives. Charged to cut up an ox, the cook set to work as if the knife was an extension of his own body. Every twist of his waist, bend of an elbow, shift in weight—a purposeful action, a choreographed dance akin to an act of creation. Slices of meat fell off the bones like repelling magnets. How marvelous. What skill! An admiring patron exclaimed. Not skill the cook replied I’m not interested in skill anymore. What I care about is the Way. The blade has no thickness. If I slide it through the spaces between the joints, guide it through the paths of least resistance, then what I do takes no effort at all.

Leave it to the Chinese to write poetic parables about butchery.

I grew up hearing ghost stories about the house I lived in. For some reason my mom was always the only one present to witness the actual paranormal occurrences. Pieces of her jewelry would suddenly go missing and reappear in the same spot where she swore she’d left them. The DVD player in her bedroom would keep sticking out its disk slot without any visible prompting. One morning, she burst out of the bathroom in the middle of a shower, hair dripping with a cinematic flourish, screaming that she found steaming claw prints all over floor. But by the time my dad and I got there the prints were gone. As my mom crawled around clawing without success for any trace of evidence, I asked her to stop, please stop. My mom thinks I don’t believe her, but I never said that. I simply supposed that demon hands, like all living things, are susceptible to the science of evaporation and an incoming rush of dry air.

The mountains of ancient China must have been magical—not magical in that wispy romantic sense, but magical as in having to do with actual sorcery—casting spells on the rich and robed scholars from that time long lost to the misty charms of journey, driven by a mad mission to achieve the impossible, to capture what they could not see. The mountains must have been beautiful in a way that eyes of today are not equipped to recognize, but surely even in the fog of foregone and forgotten centuries, they could not have looked like that.

The reservoir near my home is lined with hairy trees. Crinkly sort of trees, weak in the way that they loom, slumping over like old women with swinging  breasts. The hair, black and stringy and entangled with rare shimmers of dying bronze, tumble over branches in wet clumps—hanging almost always within the reach of a naughty arm—jump, pull and tug! A private game I played as a quiet but destructive child, the kind who never got caught stealing people’s erasers and licking them under tables. So it was shocking, truly, when one day my mom caught me pulling at a hairy vine. She grabbed the offending arm with jolting aggression, and slapped the backs of both my hands. Ghosts live inside those vines. Do not stir them. They will follow you home and strangle you in your sleep. Parenting indeed is an awe-inspiring power, made from the stuff of gods. It is why I can never look at the picture of a dead person in the eye; why, on the rare occasion when it has been necessary, I whisper fervent apologies to any bush I pee on in case I’d just inadvertently urinated on a sleeping spirit; why, even now, whenever I pass by those hairy trees along the reservoir, I don't walk, I run.

In the sixth century, a man by the name of Xie He recorded six laws by which Chinese paintings could be judged. Here are the first and most important two.

An old poem once claimed a painter would become the bamboo that he would paint. Cryptic nonsense? Perhaps. Perhaps it is silly to imagine how brittle bones can possibly hollow themselves to become nimble stalk, how the flick of a wrist can grow into leaves that swish and sway with ancient ease. Bones are filled with bloody marrow and wrists are awkward and filled with bones—but who are we to deny the delusion of magic? What is bone method? Perhaps it is a sacrifice. If so, then what is painting but an action, the resonating echo of a bygone spirit who bore the weight of mountains from its earthly body until its eventual collapse.

The Chinese calendar is lunisolar, which I understand to mean as having something do with the moon and the sun. Dates and events shift every year according to some irregular astrological pattern. That’s about all I know. It just never felt worth it to try and comprehend a version of time that seemed so disarmingly unstable. According to that calendar, the Hungry Ghost Festival is an annual festival that takes place on the 15th night of the seventh month. On this day, the right stars align, and the realms of the dead and the living open up—the usually impermeable boundary between spirit and flesh becomes porous, an eerily haunting sort of osmosis, and ghosts are once again allowed to roam the earth, perhaps to pay some old friends some unwanted visits. Growing up with the Greco-Roman calendar, I never knew the exact date of the festival, but there were always plenty of other markers to remind me of the day’s forthcoming. The wet summer air dries up for autumn, stores start putting up signs for back-to-school sale, and my mom won’t stop talking about it. It’s her favorite holiday.

When I was about 15 she decided to celebrate by buying us tickets to a special Ghostnight screening of the horror movie Insidious. She heard about the event on a radio show that specializes in ghost stories that she listens to everyday. I hate horror movies. So I’ve never understood, or perhaps I’m afraid to hypothesize, why my mom thought that Insidious would be something nice to share between us. But I went with her that night anyways—because sometimes daughters are just supposed to trust mothers like that.

I cried my way through the movie as my mom smiled encouragingly and urged me to keep my eyes open. On the way home that night, walking along streets brimming alive with the possibility of ghosts, my mom sneaked up behind me and whispered who’s there? I screamed and slapped her right across the face.

You can hardly see the man in the scroll. The sixth patriarch carrying a pole, painted in an ink so pale it would seem that the artist did not want his work to survive the test of time. The painted man appears to be a shadow of a shadow, evaporating in a watery dream, as if existing on a tenuous bridge between existing and disappearing. This is an ancient thing called apparition painting, a style that emerged during the Southern Song period. It was called apparition because of this almost anemic application of ink—artists of the time were possessed with a curious impulse not to paint the figure but instead only to suggest it, a twice removed penumbra of the actual man. Ghost. Strangely however, the features of his face would always be accented with jet black ink. The eyes, especially the eyes, would be shards of obsidian, lightning sparkling with the electricity of the very present. It is almost as if different parts of his body are occurring within different spheres of time. Most are spirit, receding into clouds of old mist, but some are moving forward with the speed of light, unweaving itself from the decaying silk to look you squarely in the eyes.

My mom begins each day with the same morning ritual. Holding our dog like a baby, she bows three times to a little makeshift shrine she built for the Goddess of Mercy, and thanks her for our dog’s continued health and well-being. She then refills a tiny vial of water that she places in front of a baseball card-like image of the goddess and gives her a fresh tangerine that will proceed to rot over the next couple days, untouched.

My mom wasn’t always a Buddhist. As a child I have very distinct memories of twirling her crystal cross around my fingers while she told me horror stories from her childhood. My mom had a difficult time growing up, the youngest of eight in a desperately poor household, she spent a lot of time playing alone, drawing on bathroom walls and burning candles in tin boxes. One time she got her hands on a Ouija board and tried to talk to ghosts. Because I was so lonely, she said. Nothing came of the game, but later that night, as she was sleeping, she was suddenly jolted awake by a gust of freezing air and the sensation of an acute pressure on her neck. A pair of invisible hands, with the strength of death, was choking her. What did you do? I asked.

My mom would smile as she remembered that right into the face of the devil, she cried for Christ to help her live. And just like that, he left. Jesus saved me, my mom told me, and that is why you should never play with ghosts. I’d nod with my whole heart as I placed my baby hand over her cross, I’m glad you’ll always have this to protect you.

My mom doesn’t believe in god anymore. I don’t know where her cross went. Now she wears a jade monkey that is supposed to help her fend off evil spirits. According to some monk that she regularly consults with, she is apparently quite the ghost magnet. The thick red string around her neck gives her hives and rashes. I would tell her that that is obviously a bad omen, and she should take the monkey off before the swelling gets worse, but I know she won’t believe me.

It will probably take me more than three thousand years to get through an ancient Chinese scroll. The time it has taken to inch its way towards my eyes, I want to dedicate the same amount to time travel back in a snail pace sort of tick-tock in hopes my patience would unlock some sort of cosmic vision, allowing ancient washes of ink to once again breathe the life of the hands that painted them, to sweep me away with the force of a waterfall cascading from a swirly heaven. Ludicrous daydreams, I know, but at least these are spirits that do not belong in the realm of my nightmares. The clock will slow, each second will expand into its own ocean, and at long last, at the end of this timeworn path, I will finally not know where I am. We come to understand that these scrolls, bursting forth with the muscular thighs of mountain giants, are infinite wells; how deep you can fall is completely up to you. When was, where were such places? How did they ever exist. Perhaps landscapes to satisfy a wanderlust not for the physical but for the imagination are not from this world at all. What is spirit resonance?

Perhaps it is a journey. If so, then what is breath but an invitation, the privilege to share the air with those that have gone before us, a gentle whisper in the ear that there is nothing to fear. Simply ask the question, where are the mountain ghosts?

KATHY NG B'17 is filled with bones.