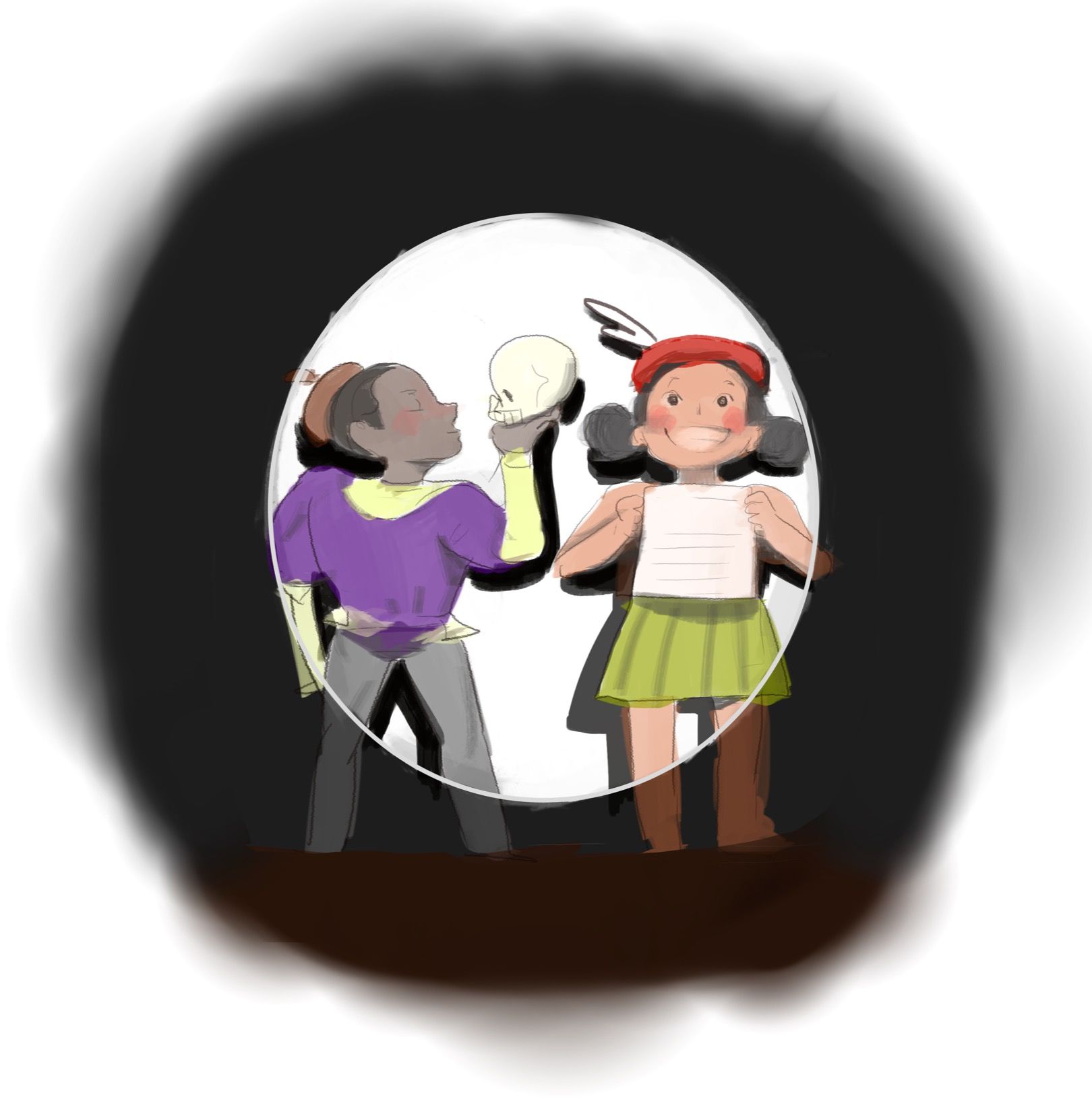 Two sister birds stand on the stage of AS220’s blackbox theater. The elder sister, Redy Red, tells her younger sister, Flicky Flick, the heartbreaking story of their parents’ forbidden love and subsequent disappearance. Their parents had to keep their love secret, “because there was this mean hawk that wanted birds that had the same colors to be together. He did not want birds with different colors to be together,” Redy Red tells her little sister.

ances, in which the adult volunteers star in plays written exclusively by children, are quirky and often hilarious. In addition to the fun and silly moments within Manton Avenue performances, each play also demonstrates Manton Avenue’s larger goal of empowering students and uniting communities through empathy and education. Each collection of plays relates to a locally inspired and community-oriented theme. Jordany’s play was featured in Manton Avenue’s “This Land is Your Land: the Public Park Plays!” last April. For this program, the Manton Avenue Project partnered with the Roger Williams National memorial and was supported in part by the National Park Foundation. The third-grade playwrights spent class time exploring the importance of public parks in their lives and discussing the ways public parks foster community engagement.

Jordany addressed the theme of public parks through the setting of each scene in Two Best Sisters. Scene Two, in which the Redy Red tells Flicky Flick the story of their parents’ disappearance, is set “at home in a tree in the park in the city,” drawing his actors and audience into ever-expanding sense of community that the Manton Avenue Project seeks to promote.

The Manton Avenue Project is successful in part because it doesn’t operate in isolation. Numerous partnerships with local organizations have allowed the nonprofit to both grow physically and to better cater its classes to specific issues and themes, such as environmental conservation. Meg Sullivan, the current artistic director and head of the Manton Avenue Project, said that Peek, the organization’s founder, chose to work with the Olneyville community because she recognized the neighborhood’s need for youth arts organizations. Olneyville is “a historically neglected and overlooked area [that was] really hard hit by the foreclosure crisis,” Sullivan said. “The goal is really to level the playing field and offer opportunities to lower-income families. It’s an incredible community of families, so there was a lot of interest and support from the community.”

In 2004, Peek began to cultivate the symbiotic partnership between the Manton Avenue Project and Olneyville’s D’Abate Elementary school that exists today. By immediately connecting with both the school’s teachers and principal as well as the Olneyville Housing Corporation (now known as ONE Neighborhood Builders), which renovated the Manton Avenue Project’s current space in 2013 and is its current landlord, Peek’s rooted her organization into the heart of the Olneyville community.

“We always say that D’Abate elementary school is kind of like the town hall of Olneyville,” Sullivan told the Independent. Sullivan says the Manton Avenue Project has also benefitted from working with other Olneyville organizations through the Olneyville Collaborative. Peter Deffet, an actor who works with the program, said that the project has brought together many of Providence’s actors and artists. “We have a list of 200 people who have been volunteering for a long, long time,” Sullivan agreed. “We’ve worked with over 400 people in the past 10 years. Providence is an incredible community of artists that are willing and want to do this kind of work.”

This culture of volunteering has helped to make the Manton Avenue Project an integral part of the Olneyville community. “We all partner with each other and we all support each other,” Sullivan said. “Because [Peek] was able to plug into that network and work with the teachers and principal, who were incredibly supportive, we were able to generate interest.”

The Manton Avenue Project’s underlying philosophy is that valuing students’ voices and ideas will help nurture their sense of self-confidence, which will in turn help them succeed in adulthood. “When the kids see their plays done by professional actors, it’s a really empowering thing. We value their plays really highly and we are going to take them really seriously and perform the plays professionally,” Sullivan told the Independent. During both the play writing and performing processes, the Manton Avenue volunteers work closely with their mentees to retain the integrity of the kids’ writing. Each sixto eight-week drama course concludes with a two-day playwriting weekend, when each playwright is matched with a dramaturg who devotes five hours each day to mentoring their partner students through the playwriting process. The mentors ensure the kids follow a specific playwriting format, but don’t edit the plays for grammar or influence plot and dialogue construction. The mentors’ goal is “not to help the playwright come up with the play, but to bring their ideas to the page and translate their ideas and imagination into something that can happen onstage,” according to Sullivan. Manton Avenue’s commitment to valuing the Olneyville community and the diverse voices of its children is further reflected in their eagerness to support Olneyville’s large Spanish-speaking population. Flyers and advertisements for Manton Avenue performances are marketed in both English and Spanish and the playwrights are encouraged to write in either language.

Jordany is a strong supporter of the artistic freedom the Manton Avenue Project promotes. “My favorite part of Manton Avenue is writing the plays, because I can write anything I want,” Jordany told the Independent.

“Tell me more,” Flicky Flick asks her older sister Redy Red as she begins to tell the story of their parents’ disappearance.

“Well,” says Redy Red, “they waited until they were older, then they said that you can be with the one your heart decides and the one you love. And then the hawk saw them and that’s why they’re in a volcano.” The two sister birds, with the help of their friend Blue Jay, set off on a quest to reunite with their parents. The play’s themes reflect the organization’s emphasis on close community relationships.

The program accepts only 10 third and fourth grade students a year in order to allow students to “really grow together as a cohort so there’s that continuity from being a group since third grade together.” The group continues taking classes together through middle school. In order to select each incoming class, Sullivan works closely with the teachers at D’Abate to determine which students will benefit most from playwriting classes and mentorship.

“Either they’re incredibly creative and they just need an outlet, or they love to write or they have some tough stuff going on at home and they need some kind of continuity, a safe, fun place to go after school,” Sullivan said. “We have a real family feeling here.” In seeking to further create a close-knit family dynamic, the program invites younger siblings or cousins of current or past Manton Avenue students to join the Manton Avenue family. “A lot of them have grown up seeing their olders sisters or brothers or cousins in plays or seen the plays that they’ve written,” Sullivan said. “There’s a real sense of family connection.”

In the final moments of Two Best Sisters, Redy Red, Flicky Flick, and Blue Jay rescue their parents from the Hawk. “So, the family lived happy together, and followed their hearts,” Jordany concludes.

Jordany is already busy brainstorming characters and plotlines for the newest theme, bicycles. Currently, Manton Avenue’s fourthand fifth-grade classes are writing plays which express the ways bicycles empower people and communities. The students, who were each given a bike, helmet, and lock courtesy of the Pawtucket River Watershed Council, will spend a few afternoons riding their new bikes before creating plays, which expand upon and explore their biking experience.

“We partnered with the Woonasquatucket River Watershed Council, and we’re partnered with Recycle-a-Bike and the Rhode Island Historical Commission,” Sullivan said. “Invitations go out to those organizations, [so the audience will be] a really neat cross section of the city [made up of] family, Olneyville organizations, actors, community activists, and people from Brown.”

“This play has to be about bikes. I’m gonna use a turtle and mice, I think,” Jordany said. The turtle and mice will make their debut in Jordany’s bicycle play in early December. The bicycle plays will run from December 1 through 4, Thursday and Friday at 7pm, and Saturday, Sunday at 2pm at AS220’s black box theater. All shows are free and open to the public.

RACHEL McMAHON B’19 and REILLY BLUM RISD’20 will be there.