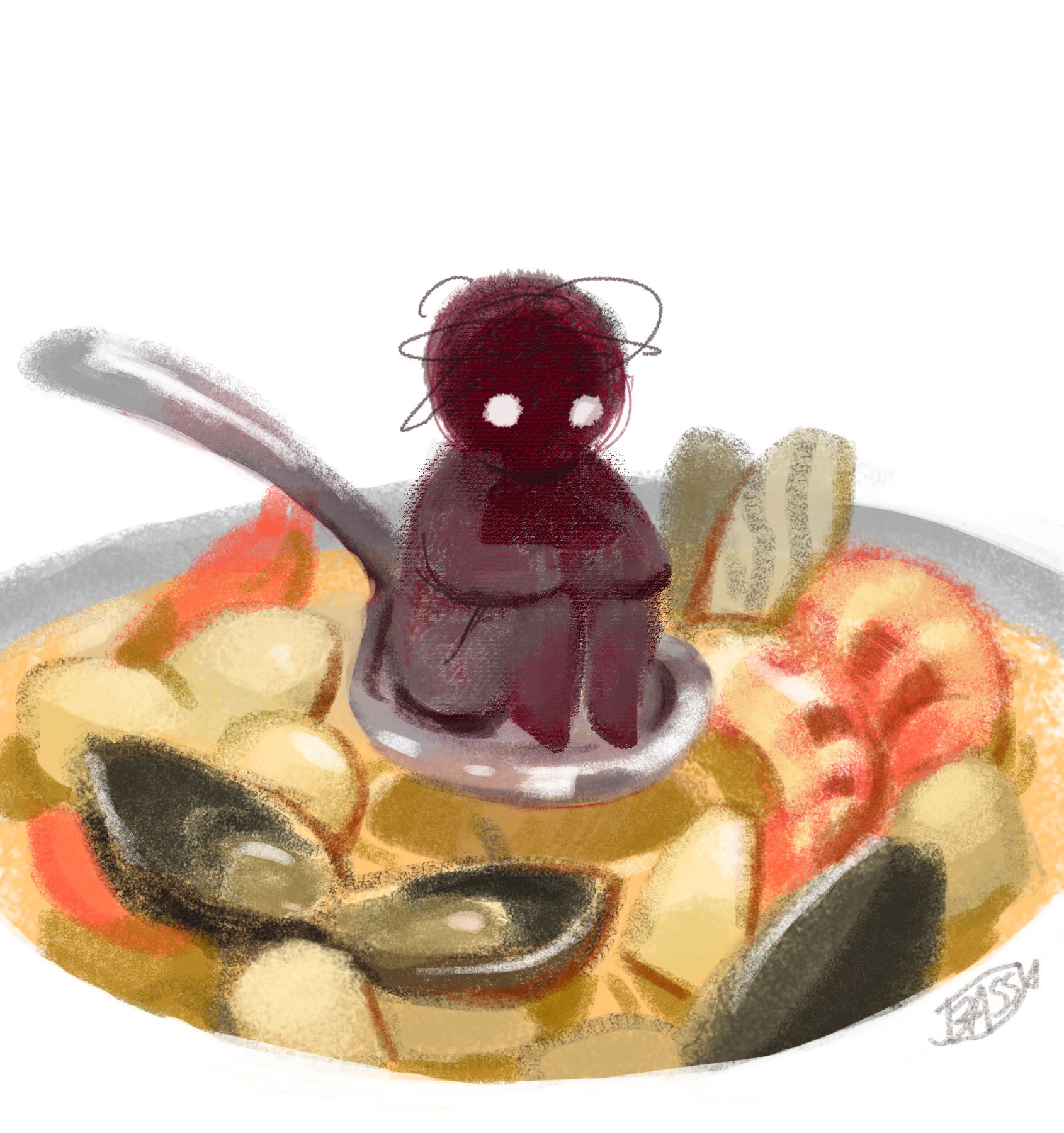 I was sitting in the bathroom of downtown Providence’s Parkside Rotisserie & Bar, hyperventilating and fighting back tears. My waiter had just brought my soup to the table. It was a fragrant bouillabaisse, tomato-based and stuffed with shellfish. Exactly what I had ordered—but still, it was wrong.

I have always been “weird about food.” That was always the phrase—in my father’s hurried explanations at relatives’ dinner parties, in my mother’s whispers to the other moms when she dropped me off at sleepovers. Ali’s “weird about food.” It was weird that all my salads had to have a 1:1 ratio of tomatoes to mozzarella. It was weird that I peeled all my grapes before eating them. It was weird that it took me an hour to eat a bowl of Cheerios because the amount of O’s in each spoonful had to be a multiple of three. “Weird” was the word—that is, before last year’s hospital stay, and the four therapists, and their new vocabulary words, like “obsessive-compulsive” and “anxiety disorder.”

The words didn’t change how I ate, but how I thought about eating. In some ways, the introduction of the medical lexicon made my eating compulsions even more intense. My inability to eat normally was no longer an obnoxious quirk I was expected to get over. Instead, the fashioning of perfect bites became like the measuring out of medicine—simply doctor’s orders. Yet the medical explanation gave me license to obsess without guilt—at least, until more concerted treatment began a few months later. After that point, I was expected to journal. To log. To attempt to get better. It was at this moment when the luxury of having a diagnosed reason for my preoccupation slowly fell away. I realized there would be no growing out of my “weird” phase.

There are plenty of people who have to fight like this. People just as anxious, broken, disordered as I am. And we all find our anxiety in different parts of our lives—maybe travel, or parties, or sex. All of my symptoms live on the bowls and plates set in front of me. Paranoia, when I can’t eat chicken in dim lighting (how else would I check for pink spots?). Overstimulation, when the restaurant is loud and my food is strangely flavored, so my mind begins to float above my body while I’m eating like some kind of ghostly gastronome. Social anxiety, when I stutter around my waitress and refuse to correct her, even when she asks if she got it all down right.

The bouillabaisse was a perfect storm. I had no idea when I selected it from the specials list how much anxiety it would come to cause me. For one, I couldn’t bring myself to order it out loud. I had to point to it on the menu and mumble a quiet “this please,” because if ever there were a word I was guaranteed to stumble on, it was bouillabaisse. And then, when it arrived, I noticed three things.

First, the bowl was huge. I would never finish it, and even if I could bring myself to ask for a to-go box, my fridge was nowhere near big enough to house it. Guilt breeds anxiety, and wasting food is a true crime of the conscience.

Second, the portions were all wrong. With my small spoon, there was no way I could fashion even a single acceptable bite (which would, of course, be a little broth, a little fish, and a little potato in every spoonful).

Third (and worst), the shrimp. They still had eyes in, and as soon as I realized, I had a vivid hallucination of them coming back to life, thrashing around and squealing in the spiced orange broth.

This is when I excused myself to the bathroom.

I understand if there is little pity to be found for me. It is privilege enough to eat, but to eat fussily is true luxury. Anxious eaters are arguably just another category of the picky, and no one likes the ones who cut the crust off their sandwiches. I may be even worse, because I willingly expose myself to the very thing that stresses me the most, restaurant-hopping like it’s my job. Better beans and bacon in peace than cakes and ale in anxiety, said Aesop’s country mouse, leaving his city cousin’s luscious table to dine back at his home. Why don’t I just stay home to eat? Where the portions are perfect? Where the shrimp are eyeless?

I suppose some of it stems from wanting more practice. It’s logical enough: the more I eat, the easier eating will be. But if I’m being realistic, I’ve eaten a lot already. I grew up eating weekday dinners from my incredibly talented Italian mother’s kitchen, and dining out at a slew of Chicago restaurants with my foodie father. I suppose my upbringing is reflected in the only two dishes that I can consistently eat without any form of anxiety: a family-recipe pasta with meat sauce, and filet mignon au poivre.

The pasta is my mother’s specialty. She makes it identically every time, no surprises. The sauce is sweet tomato, married with perfectly seasoned beef. Like bolognese, but more flavorful. The taste of home. I have no rituals for eating it. It’s unfailingly good, warm, and whole no matter how my brain tries to transform it.

The filet is a delicacy, one I wouldn’t have discovered if not for my father’s work. His job was a 9 to 5 slog, but it had one significant perk. He was expected to wine and dine clients with cars worth three times my family’s gross yearly income—which meant that my mother, sisters, and I were often the test audience for the upscale restaurants he was considering for business dinners. My first filet au poivre was at one of these lab rat lunches, and I’ve never had a bad one since. Maybe if I did, a new neurosis would develop. But until then, steak au poivre remains pure and untainted. I crunch through the peppercorns and the change in texture does not bother me. I slice through the steak without checking for gristle, because I know my father would never take me somewhere with a bad butcher. He cares about his cut almost more than I do.

A life so filled with eating makes you realize that food is more than nourishment. Food is a badge of honor, when it shows up on Instagram or in dinner table stories for years to come; food is social, in the making and the sharing of plates; food is tourism, each bite a glimpse into someone else’s life. Eating is the lifeblood of my family. Christmas, Easter, Thanksgiving, Hanukkah—no coincidence, I think, that at the biggest affairs with my friends and relations, we always end up gorging ourselves.

The sound of mixing sour cream and applesauce sets my ears on fire, but whole histories are flipped in Beth’s latkes.

The texture of spinach dip grates at my spine, but it’s worse hearing Chrissy ask why her favorite appetizer is missing.

The stringiness of turkey makes my sides itch, but telling Uncle Dolan I want white meat is the longest conversation I have with him all year.

How stupid it would be for me to miss out on all that. How shallow, how selfish, how rude. So I eat. I order bravely. I cook dishes for my friends and family that I could never choke down myself. And I fill my own Instagram with food. The prettiest plates, even if I cried while eating them.

I returned to the bouillabaisse a few minutes later. I did not put on a brave face and eat the whole thing. I did not open my mouth a sliver and pour some broth in just to prove I could. I sat there and clawed at my arms in frustration. They were red and bleeding a little by the time I left.

But I did eat the bread that was perched on the side of the plate. And I scooped out the scallops and the mussels, too. They were delicious, and the zesty flavor gave me enough strength to ask for a to-go box.

When I got home, I pawned the soup off to one of my friends.

She was grateful. I was too.