A pickup soccer match ends abruptly after a hastened, “oopf!” as the juggled ball bounces upon a flattened headstone.

Wrapped tightly in yellow ochre walls, the border of Assistens Cemetery marks out its own city block along the main thoroughfare of Copenhagen’s Nørrebro district. Established in the 18th century after a ravaging plague, the cemetery was named for its “assistance” to the overflowing burial sites in the city center, whose grounds were stacked five skeletons thick. New bodies found a home in Assistens’ expansive gardens.

Though billed today as a historical artifact—a representation of “a quarter of a millennium of Danish history”—some regions of the cemetery still serve as active burial ground.

Sitting just northwest of old Copenhagen’s northern gate, Assistens was originally intended to serve as plots for the poor whose bodies were cast to the outskirts of the city. However, the unkempt road prevented any spontaneous visits to the site, where, according to Jens Fleischer’s book on Copenhagen’s cultural history, neither “the graves nor the people were treated with the utmost respect.” 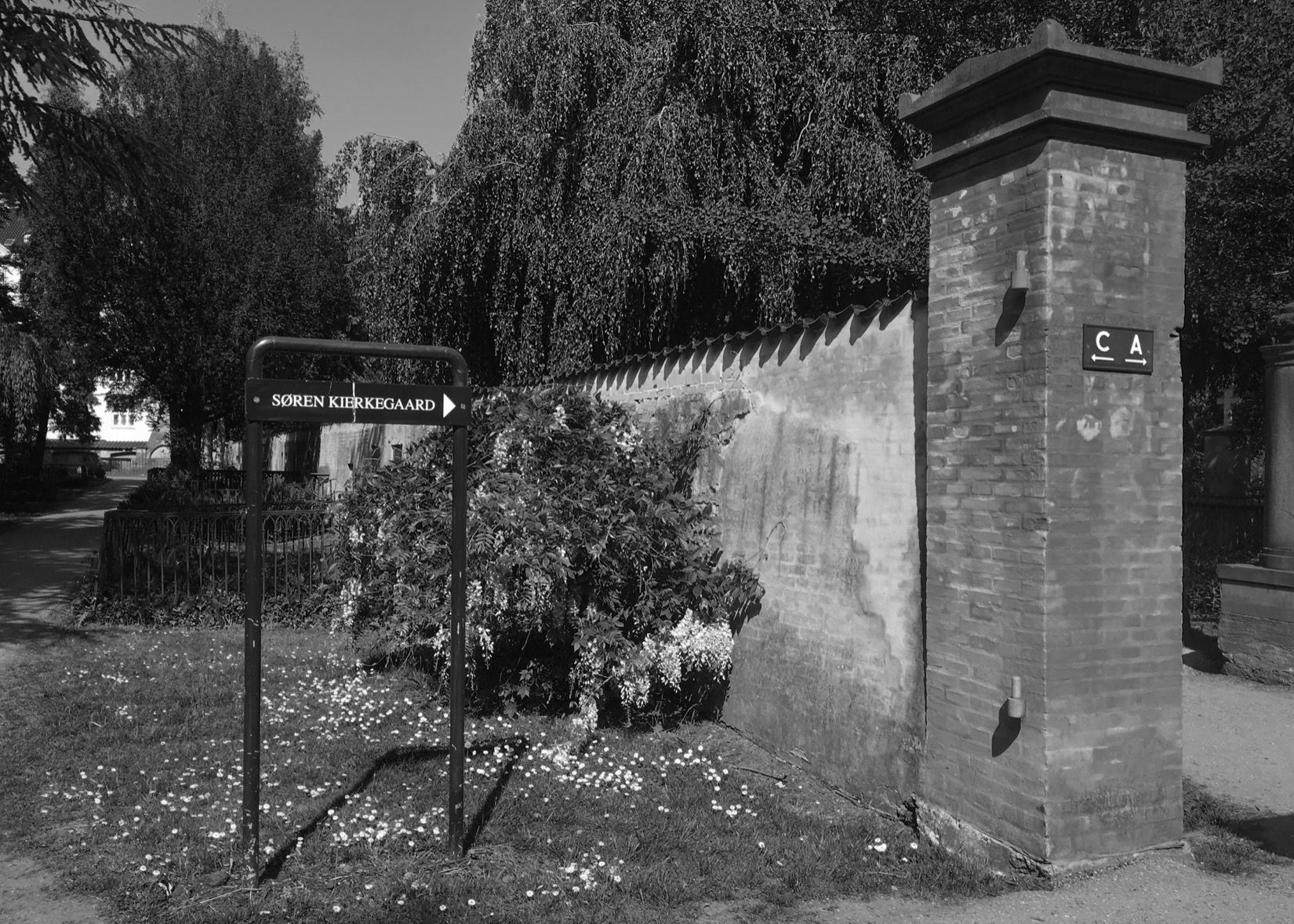 Local aristocrat Johan Samuel Augustin broke tradition in 1785, when his dying wish included a directive to place his body within the cemetery walls. Today, Danish notables lay peppered throughout. Nestled in the southeast corner, 19th-century philosopher Søren Kierkegaard is buried in his family’s plot. Surrounded by lay-

people, he’d be easy to miss if not for signs pointing the way at each fork down the winding path. Elsewhere, fairytale author Hans Christian Andersen’s tombstone stands flanked by well-groomed trees near a towering monument to Niels Bohr, the Dane who discovered the structure of the nucleus.

Making the most of the trip to the city’s outer edge, 18th century grave-goers with picnic lunch in tow turned mourning moments into lengthy celebrations. As the cemetery transitioned into becoming a stomping ground for the downtrodden and the distinguished alike, an 1805 commission from the local government banned food, drink, and loud music from the gravesites. The gravediggers, who had been cashing in on the sale of alcohol and who were tasked with policing against picnickers, did little to enforce the city’s ruling. 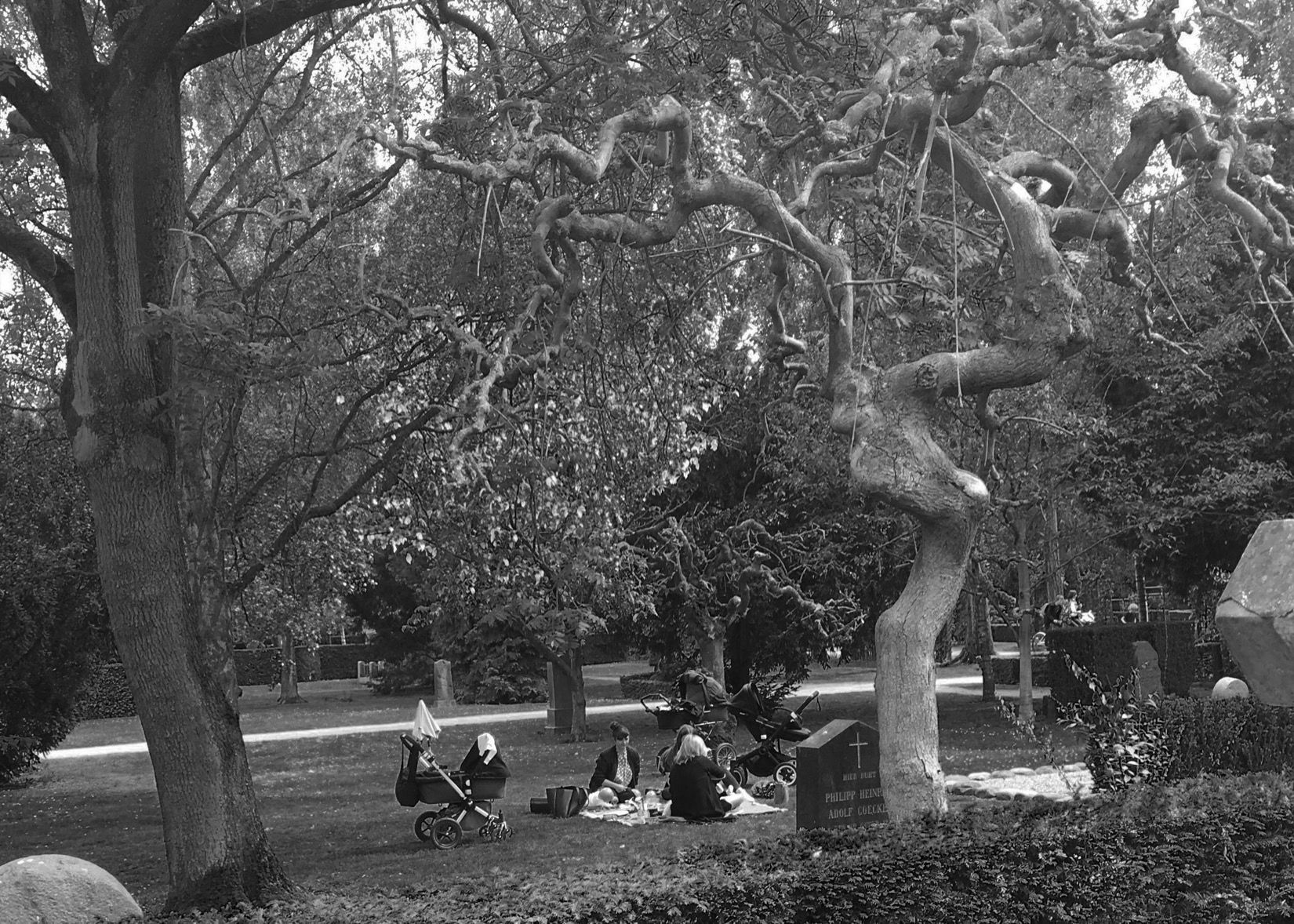 In an attempt to mandate solemnity, weeping ash and beech trees were scattered across the open burial spaces. These trees, with their trunk contortions and their scattered, jetting branches, were chosen for their quality as “sad trees” by the groundskeepers, according to the cemetery’s informational brochure. Today, babies pushed in prams picnic under the buckled branches, crying and giggling alongside the mourners and the passersby.

When the northern gate of the city was dismantled in 1856 to expand Copenhagen, Nørrebro quickly established itself as a major cultural district. The cemetery became the only significant break from the otherwise densely packed environment of row houses and store fronts in the area, a place of reprieve from the growing urbanism outside its walls.

As its surroundings settled into cement, residents of Nørrebro maintained the cemetery as a site for celebration. In his journal recounting a visit to the city in 1827, Swedish poet Karl August Nicander wrote, “in order to enjoy another softer, quieter celebration, I walked out one evening…to the so-called Assistens Cemetery. Leafy trees, dark paths, bright open flowery expanses, temples shaded by poplars, marble tombs overhung by weeping willows, and urns or crosses wrapped in swathes of roses, fragrance and bird song, all transform this place of death into a little paradise.” 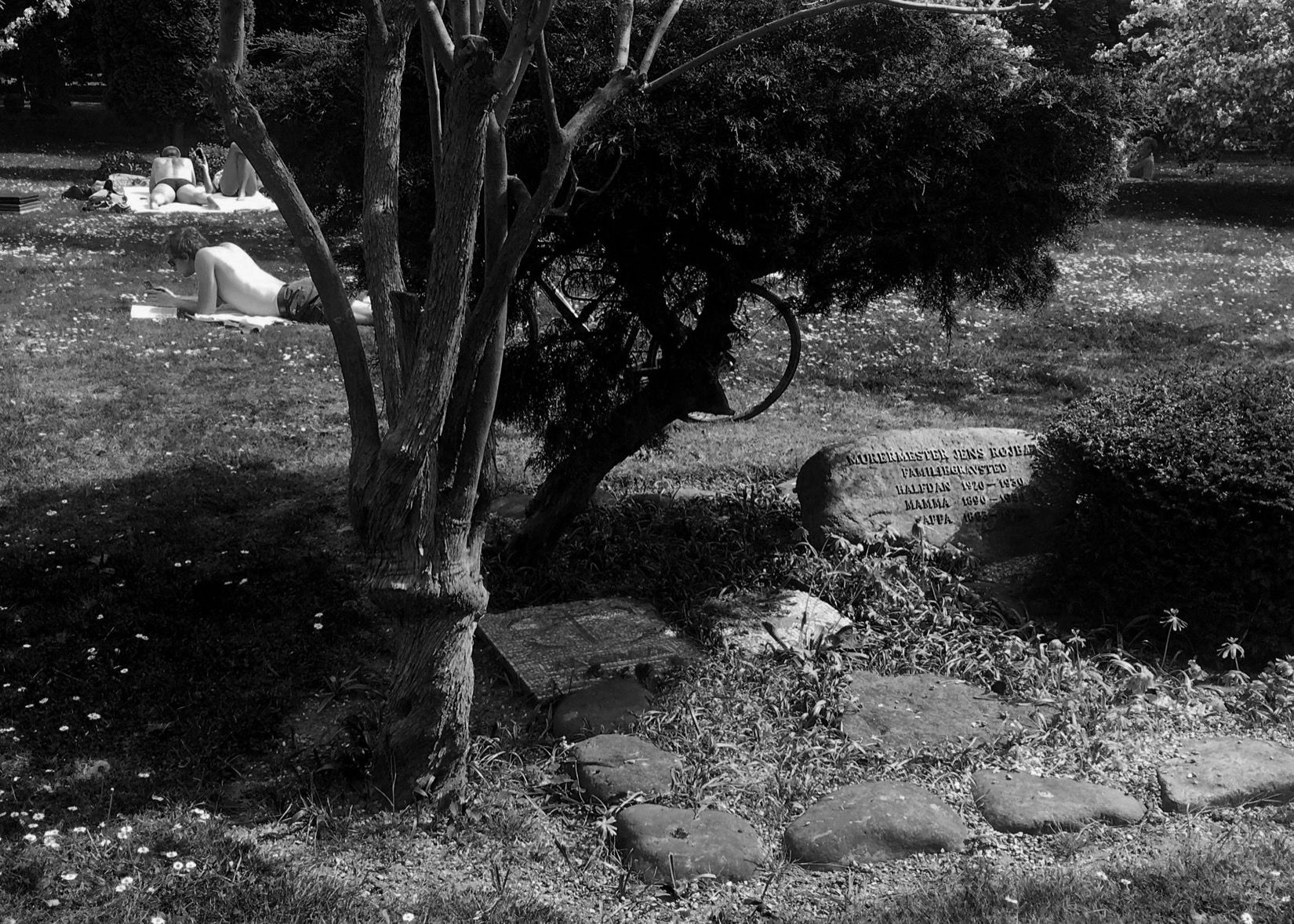 Divided by burly hedges and twisting paths, each section of the cemetery is wrapped up like an incubated fragment in a larger, folding membrane: each pocket seemingly private, isolated among the three hundred thousand left to lay, here.

Near a common grave marked by a small, iron sculpture dedicated in 2013 to serve as a communal resting place for Copenhagen’s homeless population, two teenagers on bikes pass by, puffing cigarette smoke.

At the foot of a loved one’s grave (dated October 2015), a weeping widow freshens flowers, setting them beneath the flush-mount stone. The shirtless and the sunglassed look on from their bathing towels a dozen feet away.

Elsewhere in the cemetery, a funeral commences amidst the row of headstones I walked past a week prior, rushing quickly. These dates were too familiar for comfort. Distorted by distant laughter and a retail worker’s midday smoke break, the blonde-haired family’s grief was set in harmony with the rustling leaves on an otherwise spotless, sun-drenched afternoon. 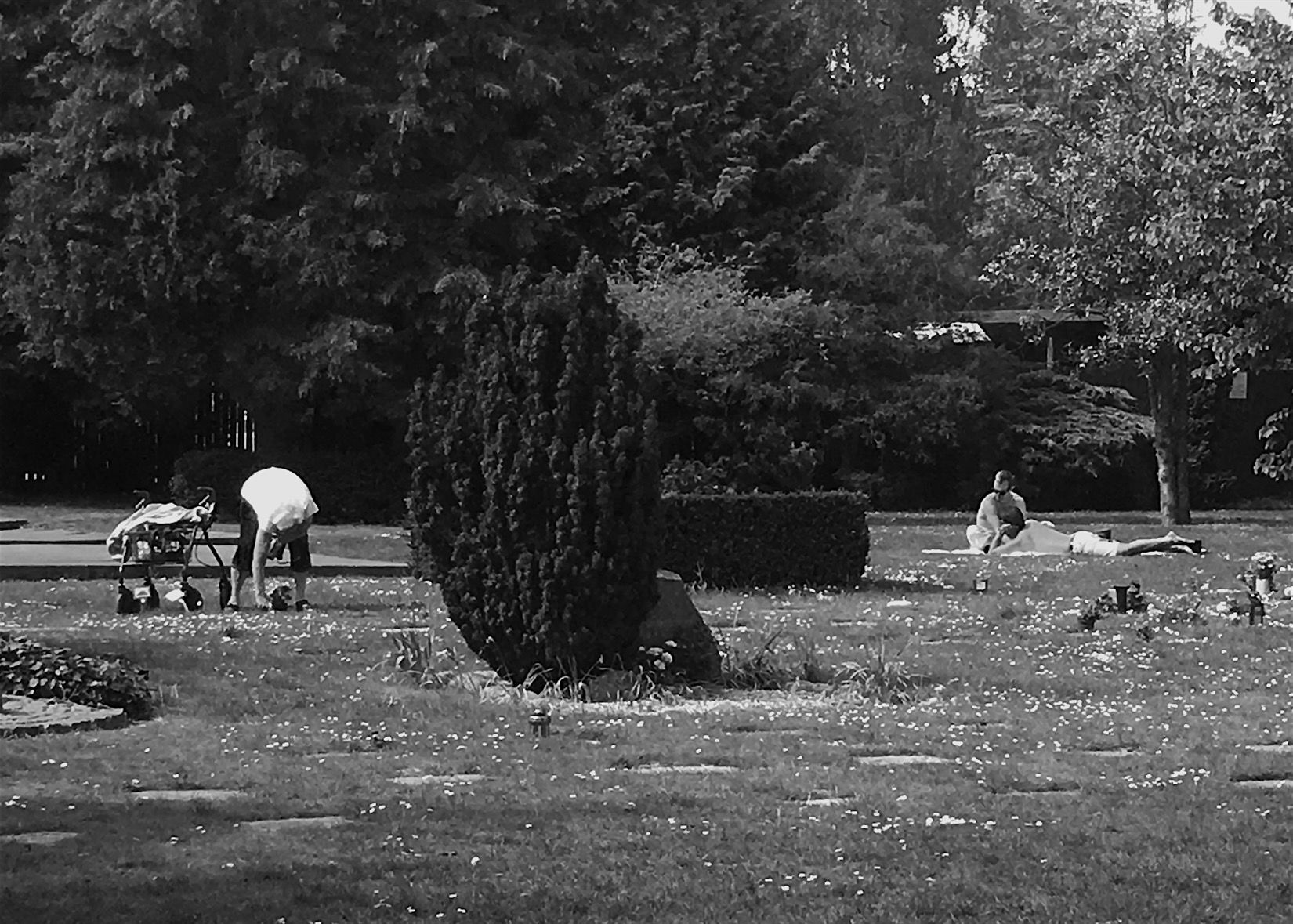