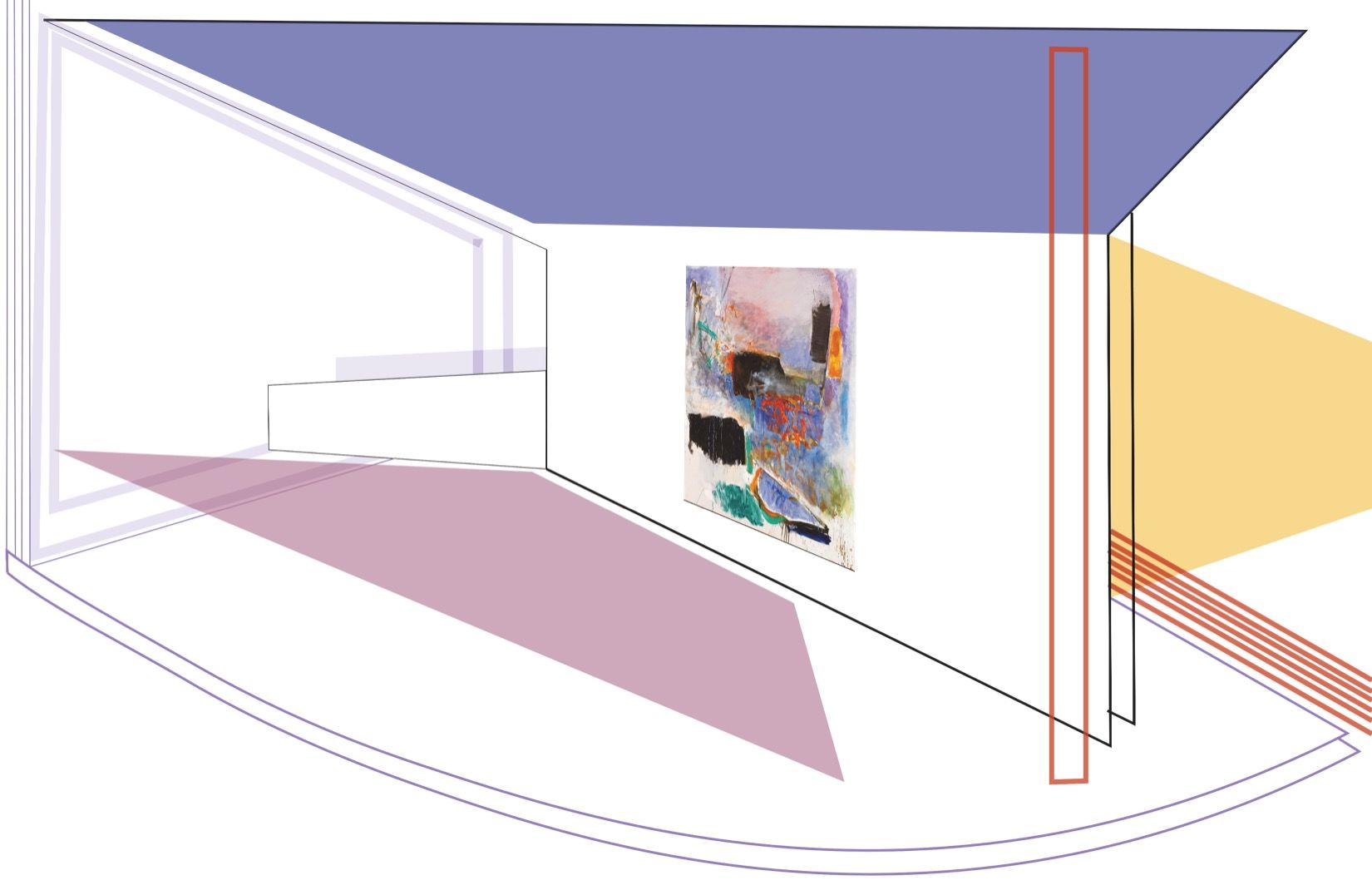 I’ve never done it. Touched an arm in the museum, I mean. I haven’t reached out to any of the boys I’ve brought along with me, instead relying on the casual sharing of shoulder space that sometimes occurs when we try to look at something small at the same time.

When I was nine, I only liked museums if they explained the blood pumping through the capillaries in my wrist or the universe we lived in. I especially loved the Denver Museum of Nature and Science. I enjoyed pulling my mom between delicately framed butterflies and exhibitions on the Mars rover. The best part of the Denver Museum was the Hall of Life. It was a parent’s nightmare—interactive displays touched by too many tiny palms to ever fully be sterile. Mom always tried to divert me, but the exhibit was too exciting for me to ever be swayed.

When I followed my parents along the Museum of Modern Art’s lightly stained wood floors at age 13, I only cared to look at what I knew: Monet’s water lilies, which I knew through the stories my mom gave me in the hopes of fostering an early appreciation for art. Or Degas’ ballerinas who wore pointe shoes that were still pale and pink, unlike the pair my friend scribbled on for me in case she ever got famous for her pirouettes. The impressionists illuminated ponds and houses along the countryside with a palette knife. Across the hall, Rothko’s color fields illuminated nothing for me. I enjoyed the vibrancy of the colors but the absence of a concrete narrative made the work feel inherently ungraspable in my mind. Unlike the paintings with tan stucco buildings and figures bent over a river, just downstream of the water wheel, his paintings didn’t take me to another world.

I first flirted with abstraction when my brother Max made up a game so I wouldn’t get bored as our family meandered through the MoMA during a trip to New York when I was in eighth grade. I don’t remember exactly what the game was except that it was fun and it made it so I didn’t pull at my parents begging them to let me look in the gift shop. The precise rules of the game are fuzzy now but I remember the process clearly. Each time we came to a new piece we were supposed to say what it made us think of, a Rorschach-like divination akin to searching for stories in tea leaves. It was a game of free association, turning abstraction into something that I could hold in my sticky palms. I’m sure most of the things that came to my mind were animals. Or stuffed animals. Perhaps my brother spoke of the college architecture class he was taking at the time, or poetry, or something more perceptive than “it looks like a sleepy cat.” Instead of counting down the minutes until my parents would give me a few dollars to buy a cookie at the grab-and-go café, I was set on winning the game.

Max never told me there was no way to win, that that wasn’t really the point. He breathed life into the museum in the hopes of getting his baby sister to keep quiet in the contemporary galleries. I would try to think of connections faster than he could, pouncing at his shoulders when I thought my idea was going to be better than his. Perhaps he laughed, or gave my parents a look that acknowledged a hope for quiet and solitude. I like to think he listened carefully—storing my associative patterns to talk about in a few years when I would call him to talk about a painting I had fallen in love with. Through the game I was connecting not only with the abstract forms of a painting but with my brother, listening to his thought process and realizing that despite the age difference we were able to exist on a similar plane inside the museum. I think that’s why we sought out art museums. They brought my family into the same physical space and allowed us to project our individual feelings onto the same object. Now when we go to a museum we wander at different speeds. My father moves quickly, letting the colors of one piece blend into the next as he creates a story of the exhibit as a whole. My mother spends time at each painting, cocking her head to the side and reading every description. My brother and I have similar tempos, and I wonder if in some ways I am still mirroring his museum meandering. We look at the exhibit and find pieces that pull us to them. We cross our arms and lean slightly to the left.

Standing in the MoMA, I realized that the way I saw the Mondrian was different than Max’s experience of the piece. As a result of playing with him, I started to think of the paintings not simply as finished pieces, but as canvasses in which I could continue to be immersed, my relationship to the piece and the people standing next to me transforming as I age.

I think that’s why I keep bringing boys to art museums. It’s a way of placing our relationship in a new territory, winding through makeshift walls and talking occasionally about what catches our eye or what that figure in the center—yes, that one slightly to the left—reminds us of. I brought a boy along with me to the Miró exhibit at the Denver Art Museum last summer and found myself fidgeting. We walked to an uncomfortable rhythm of talking and silence, constantly brainstorming the next thing to say. Within a week, I’d return to the Miró exhibit, whispering commentary into a new ear and hoping the energy of this boy’s nervous fingers would propel us as we wandered through the canvases. Standing in front of a painting we were able to glance pieces of each other’s lives, using free association as an entry point to creating the intimacy I longed for. We were playing the game.

I wish I could bring them all to visit my favorite piece. I want to share it with them. I’d bring them into my sanctuary for a moment as I try to understand why the piece is called Mooring. It’s a 1972 painting by Joan Mitchell in the RISD Museum nestled in the folding corridors of an old colonial house that has been gutted to make room for the kind of slick white walls I once dreaded. Positioned catty-corner to a large Twombly, the periwinkle and black and teal of Joan’s painting always overwhelms me. It fills the whole wall and even my peripheral vision is edged with the colors. The textures of the paint change across the canvas, heavy in some places and spread thin elsewhere to create contrast not only in hue but density as well. The first time I visited I thought I saw a boat in the lower right corner of the canvas. I love this painting because it hasn’t let me beat the game yet, the one my brother made up. I still find myself perplexed by the thickness and opacity of the pigments and the way the title demands interpretation, recognition of Mitchell’s mastery of abstraction. There’s no clear association that comes to mind when I visit. I find myself lost in its layers.

Mitchell was born in Chicago in 1925 and spent a significant portion of her life painting in New York and France. She is thought to be one of the most successful women of the abstract expressionist movement and was a part of its second generation. It was a generation that broadened the movement to more fully include female painters, a role that she negotiated throughout her career. Mitchell says the piece is one of her territory paintings, a category applied to paintings she created in the 1970s. These paintings are an attempt to appreciate her time in France and the villa near Monet’s that she inhabited for a while, looking at the ways in which physical space is reinterpreted through abstraction. I’ve played the game long enough with this piece that I feel I can almost speak for Joan in the present tense. We’re on a first-name basis, you see. I’m not sure territory is strictly a spatial parameter, something that she is taking ownership of between the periwinkle and orange. Standing in front of the painting, territory becomes more a delineation of the spaces we occupy, both emotionally and physically. It is the multiple spheres of our lives, overlapping with the experiences of our companions or sometimes leaving us alone in our own territory wondering if we’ll ever be able to share it with someone else. I want to watch the boy’s peripheral vision become overwhelmed by Joan’s handiwork, but I’m not sure whether that is out of a desire to share the piece or to see if Joan approves of him.

“I paint from remembered landscapes that I carry with me––and remembered feelings of them, which of course become transformed. I could certainly never mirror nature. I would more like to paint what it leaves with me,” says Joan in a 1958 interview with John I.H. Baur. I am trying to write what Joan leaves with me, what I hope will be left when I take a particular boy (the one who seems to be special) to the painting.

I haven’t brought him to Joan’s piece yet. Maybe there hasn’t been a boy who’s worthy. I wonder if the picture of him standing by the painting is better in my head than it might be in reality, as if I were cutting around the edges of the sweater one of them wore when we visited the Clyfford Still Museum and gluing him in front of Joan. In my mind he breaks the barrier between us and rests his hand on my waist, pulling me in to show that he understands that there is some unnameable energy to the piece—bringing us together in that silence. Or maybe we will just walk in and stand there. I’m not sure if I’ll ever be able to bring him into my museum territory. It’s a part of the game I am making up as I go.

RAPHAELA POSNER B’18 is territorial.