A conversation with Ronald Lewis of the Low Mountaintop Collective 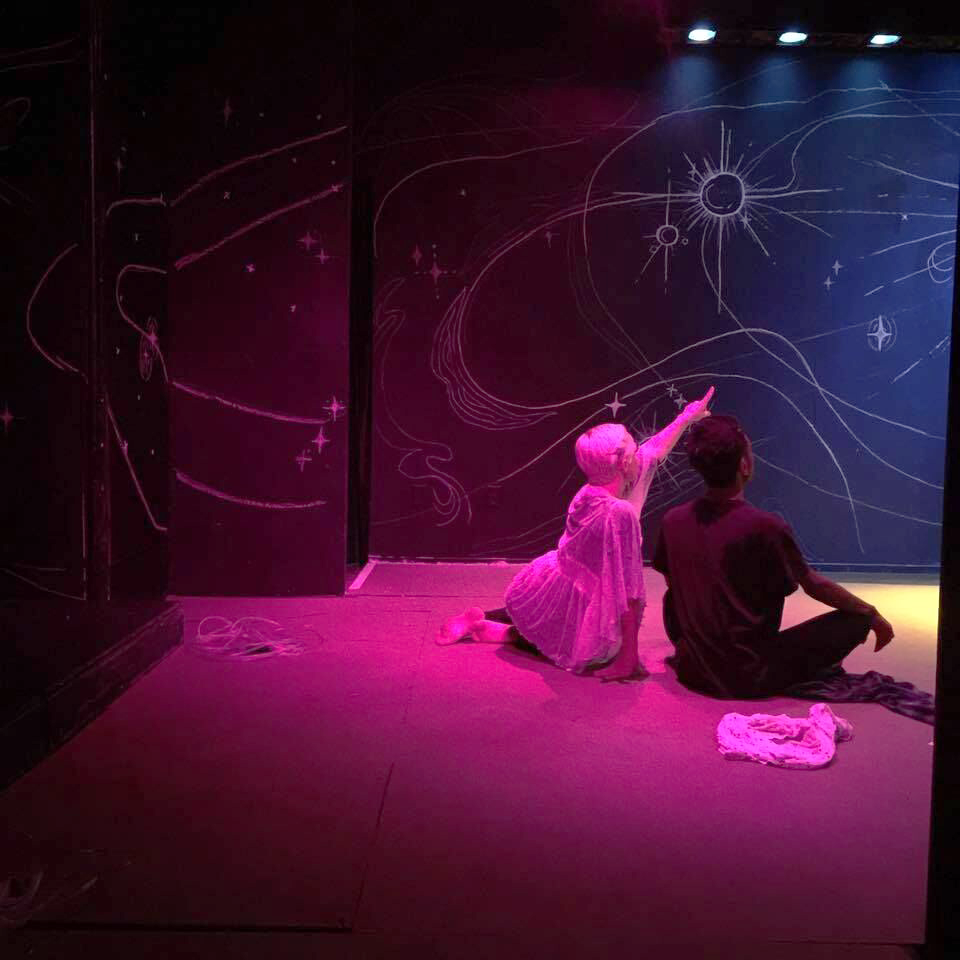 Ronald Kevin Lewis is a theater artist, dancer, poet-performer, and child of god whose group, The Low Mountaintop Collective, is performing their first immersive dance/theater/poetry piece this weekend in the Mixed Magic Theater in Pawtucket. Entitled “Breath(e),” the piece circles around questions of connectedness and cosmic wonder as the audience is led through an interactive labyrinth to a dance piece, which continues into a night of poetry. We spoke with Ronald in a red room of the co-operative we all call home.

“I don’t know exactly what a prayer is.

I do know how to pay attention, how to fall down

how to be idle and blessed, how to stroll through the fields,

which is what I have been doing all day.

Tell me, what else should I have done?

Doesn’t everything die at last, and too soon?

Tell me, what is it you plan to do with your one wild and precious life?” - Mary Oliver, The Summer Day

ronald: To remember breath, and to remember what breath is, in a way. With a lot of what has been happening in the world, specifically with police brutality and Black Lives Matter and all of these things that are in conjunction with nation wide protests etc, I felt really heavy. For the past couple of months I felt the need to investigate my inner world in a deeper way. To really investigate what center is, and what anchor is.

The work of Breath(e) is grounded in all of those things—in this desire for wonder, and this desire to be filled again.

eli: I’m curious about the labyrinth structure that frames Breath(e). I feel like when you go into a labyrinth you get lost, but you also find something, and those things go together. I’m wondering how that labyrinth space figures into the piece as a whole and why you chose the labyrinth as a frame for the individual experience and reflection that takes place there.

ronald: The labyrinth is the beginning, and it’s based on the Tree of Life which is a symbol that’s been haunting me for a while. For a lot of esoteric weird reasons I guess.

ronald: Ok, so the Tree of Life’s symbolism is kind of insane. It relates to Jesus, it relates to Adam, it relates to us and it relates to God and what we imagine to be the image of God. That’s really intriguing to me because it also relates to chakras and to energy spaces. The reason we chose it was because we wanted to have just the labyrinth itself this past summer, but it didn’t happen because the shootings in Orlando happened so that became a big focus instead, but the original thought was to just focus on the first seven Sefirot, because we were seven weeks past Pentecost. So that was the idea behind it and that just stuck onto the project afterwards—the idea to just focus on the first seven Sefirot.

The Sefirot are kind of like spheres of being, modalities of energy or temperance in a way. They are also all attributes of the divine. They start, and the labyrinth starts as well, with Malkuth, or earth, and that is kind of like the present moment, the space in which we are now, this [gestures to us talking together in this room] in a way. And then you travel up the tree to the different other spheres. After Malkuth is Transmission. After that I believe is Victory and then Splendor, and then Beauty. One cool thought about the tree of life is that in the beginning there is the Creator and the Creator is all of these different temperances, and it just creates a mirror image of itself that is the same thing. And then that thing becomes shattered into all of the fragments that we are in now in all of our existences.

There’s a fabulous scripture in the New Testament that talks about Jesus healing a blind man’s eyes. He heals his eyes the first time and he says, “what do you see?” And the man says, “I see people, but they look like trees walking.” And so Jesus heals his eyes again, touches his eyes again, and he just sees people, and Jesus says, “Tell no one what you have seen.”

eli: but then, it’s written, too

ronald: Right. I think there’s a lot of depth there. It’s too wonderful for me. But I think there is—going back to the idea of breath right. Breath is this exchange we have with trees. There is some kind of connection, you know.

athena: it feels to me that because of that transmission and connectedness to our environment, and to “our” land, and to this land, and to be in a land that’s built on so much violence—all the trees in this place are new. Eli and I were just talking about this. There aren’t that many old trees here because of the colonial violence on this land and continuation of that. So I think it’s a beautiful thing to point out the connection there—that, no, there is a connection here, these things matter, these trees matter, their deaths matter, they are a mirror.

ronald: A favorite author of mine wrote that in the ancient world, specifically in ancient Jewish thought, there is no word for spiritual life, because everything is innately spiritual. Everything is connected, there is no separation between the spiritual and the natural, they are one.

athena: I love that thinking in terms of your performance too. That the audience is one with the performance.

ronald: Yeah, the audience themselves do become performers in the space.

ronald: Yeah. I have to constantly have that conversation with myself. Remembering that what I am doing is holy in a way, and that these ideas are not my ideas, they are just something that falls upon me, or that I run into, or that are blessings. And if I try to have a specific kind of ownership over them, it ruins the thing in itself.

eli: I feel as though that ownership is why we need a word for spiritual today. When trees are treated as wood and resource and land as property—you need to say, oh no that’s not spiritual anymore. That’s not a spiritual way of being.

ronald: Going back to the tree of life—the Etz Chaim. The Etz Chaim is a Tree of Life, and those who hold on to her are blessed.

eli: That’s amazing because it just reminded me that in a lot of synagogues they had the Etz Chaim in the lobby before the holy space, and all the dead members of the communities are up there as leaves as part of the Tree of Life. There’s like this huge tree of names, it’s like exactly what you’re saying. It’s one of the most beautiful parts I remember of my many dreaded days— like wow, one day I’m going to be on that tree. (laughter)

ronald: In that hymn, right, it ends Kadesh, Kadesh Yameinu Ke-Kedem, which I believe is translated, “Cause us to return as in days of old.” So I heard recently that people are hungry for an ancient wisdom relating to self, to community, and to earth. That’s also kind of what sparked all this work with The Low Mountaintop Collective, and Breath(e.) The theater originated out of this spiritual space. Whether it’s the Ancient Greeks or wherever else it was happening in the ancient world, it was first connected to religious practice.

So as a theater artist there’s this question—there’s a magic there, so how do we move away from this explicit, “Ok now we’re going to tell a narrative and story” and into the question, “How do we invite people into an ancient wisdom and an ancient magic?”

athena: so what does magic mean now, for you?

ronald: Art-making is definitely magic. But then intention, right? When you make something with intention, that’s giving life in a way.

athena: I see it like we have this objectified world where we need the objectification to justify using “things” for resources instead of honoring their life. For me I feel that there is this shared life inside each thing we are taught to view as separate, and that through intention you can access any-thing through any thing—once you get to that life layer, the connections you can make with other living “things” which are supposedly objects, to me that’s magic. Because then things start to operate on a different logic.

athena: Because this place’s logic is… fucked up.

athena: Yeah, that’s what it’s meant for. To kill our understanding of living things so we can take advantage of them.

ronald: I hope people leave with that feeling that everything is connected. So the breath work is very important. There is a person, Pol, who walks you through the breathing exercise, and then you walk through this labyrinth of seven spaces. And there are three questions positioned in specific places for people to answer. One is: where are you going and where are you coming from? Another is: describe a moment in which you realized how strong you were. And another is: describe a moment in which you were forgiven or forgave someone. Spaces for people to leave behind information and to reflect in a way. And some people have given some crazy answers, which is both cool to see and really frightening at the same time. And so the last thing in the labyrinth is a mirror. And there’s a star machine that is beaming into the mirror, and then they’re also given a star by an actor-dancer.

eli: it reminds me of the river in the underworld, especially as Charon is guiding people in. And you pay, that coin exchange. Maybe a little bit of a stretch. And then those questions about forgiveness and stuff feel like questions to cross a certain threshold.

You can see “Breath(e)” at its closing weekend at Mixed Magic Theatre in Pawtucket, RI.