Who says you can’t teach an old dog new tricks? 11-year old Apollo, of Jacksonville, Florida, would beg to differ. And also probably for a treat, after more than six weeks without his beloved peanut butter Buddy Biscuits®.

Apollo escaped his enclosure by mysterious means on August 11. The ruffled Great Pyrenees pup was being true to his lofty origins when he left his backyard in the low-lying wetlands of Florida and bounded up through Georgia for the Appalachian Mountains. When asked why he did it, he merely gazed at the interviewer before going back            into his dog-bed for a nap. But this writer thinks Apollo was merely fulfilling his obligations to his pedigree’s instincts before it’s too late. A Great Pyrenees’ typical lifespan is 10 or 11 years, and dogs have bucket lists, too. Besides, a little vacay to run up the eastern seaboard is a swell way to get some respite from Jacksonville’s swampy heat, for which painting is hardly any remedy.

Owner Cynthia Abercrombie (no relation) got a call on September 8 about her missing companion, who she’d kept since he was a wee 6 months old. As she thought she’d never see him again, she was happy to hear that her dear Apollo had been found by a woman named Lisa White.

Until she realized Lisa White was an animal control officer in Swansea, Massachusetts. Abercrombie then felt like she’d gotten a second confirmation that she’d never see Apollo again.

But White, a dedicated animal controller, coordinated a two-dozen-driver rescue relay with the help of East Coast Paws, a volunteer animal transport service, to get Apollo and his paws back down the east coast. He got home late at night on September 23, wearied from two weeks of car rides and several nights in strangers’ homes. Abercrombie was at a loss for how Apollo made it all the way to New England, speculating that someone must have stolen the dog. However, I really have to wonder why anyone would steal a breed with such a poor temperament (my best friend in high school got his hand chomped by a Great Pyrenees!) and one that’s 11 years old, at that. Abercrombie is happy to have her best friend back. For his part, Apollo seems content to join thousands of other seniors who have retired to sunny Florida. When the Independent asked for comment on his thousand-mile romp, he had only to say, “Rough, rough.”

The storied halls of Harvard University were filled with Nobel laureates last Thursday evening. They came from across the globe to present the Ig Nobel Awards, an annual celebration of scientific absurdity and the unofficial epicenter of scientific nerd-dom. The Annals of Improbable Research hosted the event, which featured the tagline “Achievements that make you LAUGH, then THINK” (emphasis not my own).

Past winners include a man who built prosthetic legs and attachable horns to live among a herd of goats (yes, he did eat grass). A team of linguists who proved the expression “huh?” exists in every known language. And a physicist who put to rest the question of why pregnant women don’t tip over. This year’s winner: a rat wearing polyester pants.

Well, kind of. The recipient of the 2016 Ig Nobel Biology Award was the late Ahmed Shafik, an Egyptian urologist and sexologist who researched the effect of different pants materials on the sex lives of rats. Polyester, cotton, and wool were in the mix. In the Cairo University study, over a year-long period, 75 rats were outfitted with their respective trouser textile. Unfortunately, images of the rat pants are not included in the paper’s figures. However, there is, in fact, a tail hole.

Shafik then measured the rats’ rate of intromission to mounting. We’ll leave the specifics of that unit of measurement ambiguous, but let’s just say the rats that wore polyester pants had less sex and rats wearing other materials had an insignificant sexual response. Shafik conducted similar research on dog pants and human pants, with the bulk of his research completed in the early 1990s.

The reason Ig Nobel chose 2016 as the year to honor the late, great Shafik was because his work began a discussion about the harmful electrostatic field created around genitals by polyester material, which many argue lowers sperm counts. While the field is still contested, in an era where casual radiation is on the rise (think cellphones in pockets and laptops on laps), every sperm counts. 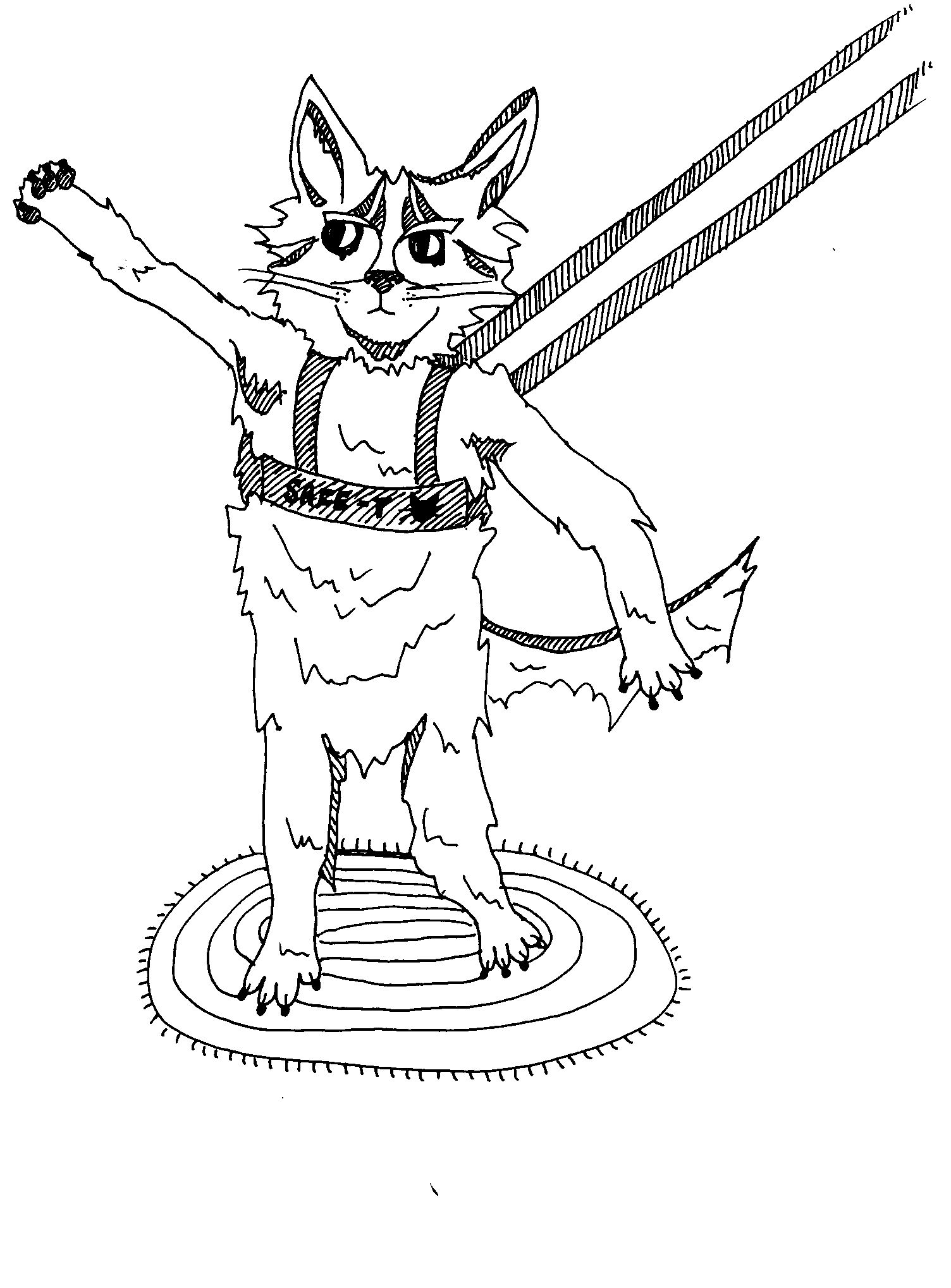 The residents of Kenai, Alaska, have made the irreparable mistake of confusing cats with dogs. Let us reflect on this for a moment.

A dog is stupid. A dog slobbers. A dog has the attention span of a three-year-old. It will chase a ball that is thrown or, more embarrassingly, its own tail. Worse, it may even hump your leg.

A cat is smart. A cat does not slobber, it purrs. A cat is always immaculate, meticulous, poised. If a cat were a person, it would be invited to exclusive cocktail parties and salons.

And yet, it is the latter, not the former, that the city of Kenai may require to wear leashes. A radical new ordinance currently being debated by the Kenai City Council would force all members of the feline species to undergo some method of “restraint” at all times, chiefly in the form of a leash.

In an exclusive interview, Kenai Mayor Pat Porter told the College Hill Independent that the motivation for the ordinance comes from an influx of complaints, specifically from a certain neighborhood where upwards of 20 cats or more have been reported by residents. (Perhaps the residents should have appreciated that so many whiskered individuals deemed the neighborhood worthy enough to grace with their presence).

When pressed about whether she has ever actually owned a cat herself, the Mayor allowed that she once had.

“His name was Cinder, because he was black,” she said. “He was never allowed outside, and as a responsible pet owner I don’t think they should be; it’s like with horses and dogs, if you do take them out, you need to have a restraint.”

She added, in a sweet grandmotherly voice that betrayed no signs of sadistic tendencies, that she had had Cinder declawed.

In an opinion piece published in the Kenai Peninsula Clarion, a so-called veterinary expert noted that “allowing cats to roam outside can be ‘inherently dangerous’.”

He continued: “For those who want to enrich their cats’ lives with the outdoors…cats can be taught to accept a harness and leash for a supervised walk, just like dogs… On the first few walks it is common for a cat to just want to lie in the grass or sniff the breeze, but as the cat gets more used to the idea it will gradually begin to explore and ‘true’ walks can begin. On the first walks, keep things brief, positive, and try to end the experience on a good note.”

While it is not traditionally the role of the news to bring in the opinions of the reporter, under certain extraordinary cases, such as the one set before us, objectivity must yield to dogma. Thus, some would argue that this proposed ordinance violates the entire essence of felinity, a grotesque catstration of the species in its purest sense. One doesn’t have to be a libertarian to believe in, to a certain degree, the right of free will and a command of one’s own autonomy, and what creature on this planet exudes more claim to acting on its own free will than the cat. To roam the streets of suburbia like wild bison once roamed the Great Plains, to defecate wherever one pleases and to gaze down patronizingly on passerby from whatever vantage point so suits them: these are but of a few of the dignities that constitute the expressions of feline free will. Putting it in terms that may cut through to even those with the dimmest of wits, to make a cat wear a leash is akin to forcing Coltrane to perform on the kazoo or lobotomizing Einstein; it is, quite simply, applying a limit to greatness, an impediment to perfection.

Yet, regrettably, there are those selfish enough to want to infringe upon the expressions of these feline liberties, simply out of spite.

“Twice I have accidentally stuck my fingers in cat poop while trying to weed my flower garden, and I had to start trapping them after that,” wrote one misguided councilwoman, a leash advocate, who has, it would seem, never experienced the visceral joy of watching a kitten video in her life.

Nevertheless, the ACL-Mew seems unconcerned with the possibility of a restrictive ordinance and a potentially devastating repeal of a civil liberty that cats of all creeds have enjoyed for near millennia. When asked to provide a comment on the proposed ordinance, an ACL-Mew spokes-cat merely twitched its tail, murmured a dismissive “meow” and licked its private parts.