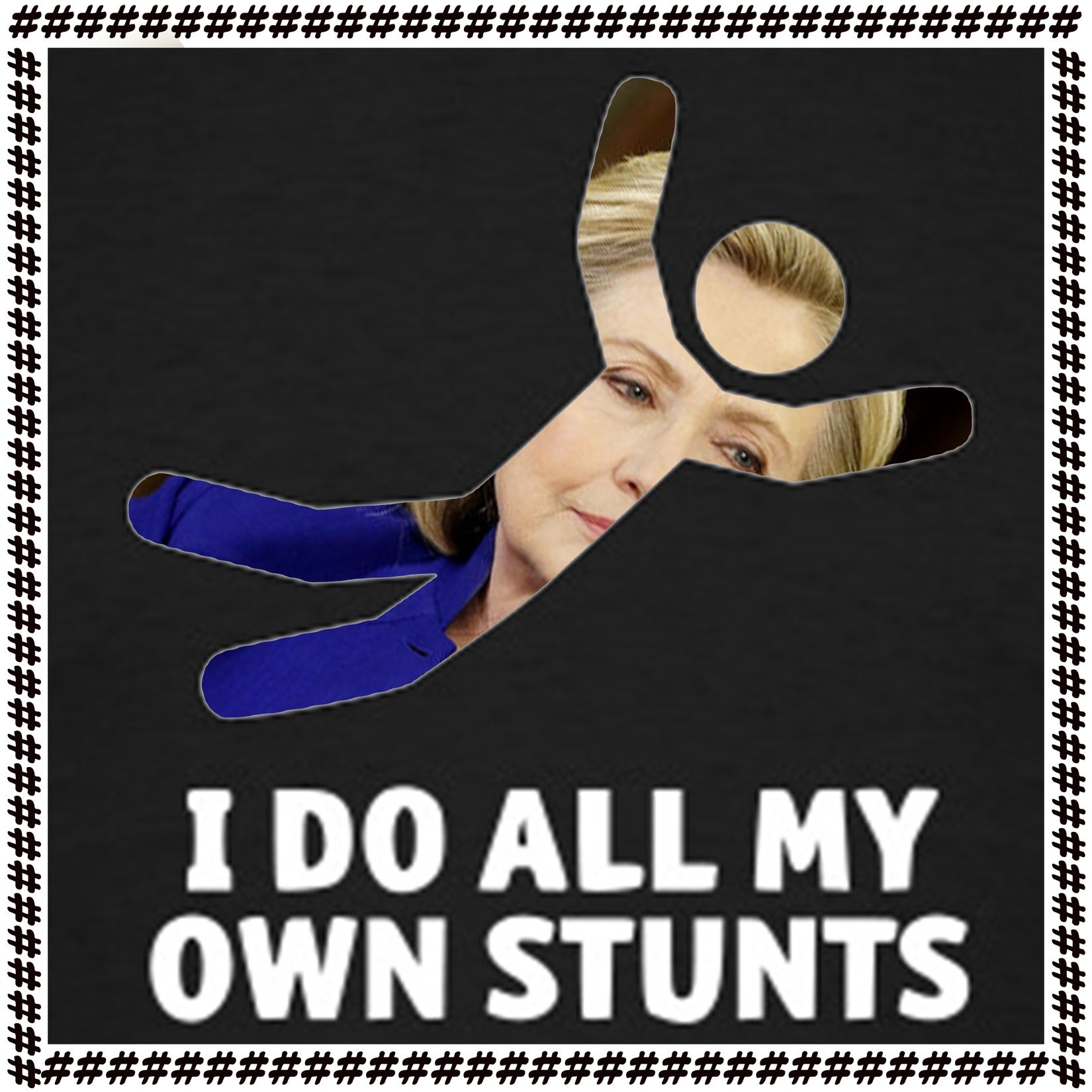 When considering whether or not to take a day off of school or work, most of us don’t think of finding a doppelgänger to fill in for us while we stay at home to nap and play Super Smash Bros. But clearly, we just haven’t been thinking as creatively as the Donald Trump supporters who managed to get #HillarysBodyDouble trending on Twitter.

After appearing to collapse and leave early from a 9/11 tribute on Sunday, followed by the announcement that she had been diagnosed with pneumonia, Hillary Clinton was seen outside her daughter’s home in New York hours later looking happier and more well-rested than she had earlier. Trump supporters pounced on photographs of Clinton on social media, claiming that Hillary was now hiring a body double to appear in public while she stayed inside with a cup of tea to watch Netflix or something, which sounds like a great idea to me. Besides lacking the gaunt, frail, and pallid countenance of others cursed with the notorious common and curable inflammation of the lungs, these observant Twitter users noted “subtle hair differences,” a “different nose,” and an index finger that wasn’t long enough in the new photos.

Though Hillary’s plan to fool the press was foiled by these detectives for the people on Twitter, I still hope she got in a solid evening of binge-watching in—exactly what I plan to do once I finish writing this sentence. –JA

You don’t have to be a bright politician to see why it is a bad idea to invite your worst enemy to your country. After Donald Trump called Mexicans rapists, drug traffickers, and criminals, anyone would assume that the last thing Mexico’s President, Enrique Peña Nieto, could possibly think of doing was inviting the Republican candidate to Mexico. Right? Last week, when rumor had it that Trump was making a last minute visit to the US’s southern neighbor after an invitation from the Mexican President, Mexicans could not believe it. A bad joke for sure. But some hours later Trump tweeted: “I have accepted the invitation of President Enrique Pena Nieto, of Mexico, and look very much forward to meeting him tomorrow.”

Many Mexicans got rightfully angry. It took them less than five hours to organize not one, but three protests against the meeting in Mexico City. Most of us, however, were just really confused about the whole situation and wonder: what was Peña Nieto thinking when inviting Trump and what was Trump thinking when accepting the invitation? Call it bad public relations, but I believe there is something deeper going on.

Just think about it. What do Enrique Peña Nieto and Donald Trump have in common? A lot. First, the obvious: flamboyant and questionably real hairstyles. They would be nothing without their iconic quaffs. Then, the ugly part: the entire Mexican people disdain them. But ultimately, what unites Trump and Peña is their gigantic egos. Only two men with incredibly massive self-esteems could agree to such politically blind plan. They probably thought that they had the power to convince one another of their own political agendas. #ToxicMasculinity.

Trump went all the way down to Mexico to tell Peña Nieto he was going to build that wall. As for Peña Nieto, was he trying to convince Trump that Mexicans, his people, were good and well-behaved? Not certain about that. But what’s clear is that, even though both men were physically together in the same meeting hall, no actual dialogue happened. Proof of that was that the first thing that Trump tweeted after leaving: “Mexico will pay for the wall.” Meanwhile, Peña Nieto’s first tweet said this: “At the beginning of our conversation, I made clear to Mr. Trump that Mexico will not be paying for the wall.” You may say that this is what disagreement looks like, but I actually think that during the meeting, both men simultaneously talked for an hour and left thinking that they had given a lesson to their enemy.

...CAN YOU USE THAT IN A SENTENCE?

On Thursday, Johnson, the Libertarian presidential candidate, was interviewed on MSNBC’s “Morning Joe” when he drew a big foreign policy blank. Pressed by the show’s co-host Mike Barnicle to explain what he would do about Aleppo if he were elected president, Johnson found himself in a corner. Surely he knew what Aleppo was...or could it be A.L.E.P.P.O.?  C’mon Gary, he may have thought to himself. You’ve studied this….You’ve trained years for this!  But Johnson was running on no context here. Just some sounds, ah, leh, po, tossed into the air.  Out of options, Johnson ever-so-casually asked  “And what is Aleppo?”

Apart from being the largest city in Syria, Aleppo is a central battleground in the country’s ongoing civil war and refugee crisis. It’s in the news every day. Aleppo is definitely a place a future leader of the United States should be familiar with. Barnicle, dumbfounded at Johnson’s flimsy response, simply replied “You’re kidding...”  Twitter was outraged, and #WhatIsAleppo quickly started trending. But Johnson himself may have been the most upset by the blunder.

“I’m incredibly frustrated with myself,” Johnson said of the flub in a follow-up interview. He later released a statement to CBS News saying that he did, in fact, “understand the dynamics of the Syrian conflict,” but when asked about Aleppo he “immediately was thinking about an acronym.” He added that, if he were elected, he would have “daily security briefings that, to [him], will be fundamental to the job of being President.”

While some may attribute Johnson’s fumble to his party’s generally isolationist bent and relative disinterest in foreign policy, it seems Johnson may just not be studying his Important Facts hard enough. In July, the New Yorker reported that Johnson asked an aide “Who’s Harriet Tubman?” while being directed to a convention room named after the famous American abolitionist.

The third-party candidate is still fighting to reach 15% in the polls in order to qualify for the presidential debates. It’s not yet clear how this incident will affect his chances of securing a spot on the stage. However, it sure couldn’t hurt to start reading the news.