Thoughts on the Two

My own heartbreak was the first opportunity to fully narrativize my life. A break up even has its own soundtrack.

I already have an easy hook, a smell: leather and cigarettes. This may or may not be an appealing scent, but it was her scent. What I mean is this is what I can tell people. It is a particular kind of conversation, sharing past loves, hard to describe without falling into its rhythms. Rhythms determined by theater, comics, movies, novels. I enjoy the rhythm too much, so I say:

“The smell of cigarettes and leather will always remind me of her. I was 16, I still fetishized ‘troubledness’ in that immature way.”

Or someone might play a song, The Sweetest Kill, by Broken Social Scene, and I can say:

“My terrible high school girlfriend showed me this song. She broke my heart.”

And it’s a true joke, and people laugh, say “awwhh”. It’s easy. I have gotten very good at telling this story, and it is fun to tell. In the right context I get the reaction I’m looking for.

These reactions make it a tempting story to write. It’s the affirmation that my small-time heartbreak is interesting.

But I am suspicious of writing anything that feels indulgent, or too much like a cheap commercial, or invisible. My life has been easy, and I need to know how I can write about it today, without bland profiteering. If I make clear the intention to escape my boring-ness, am I absolved of the sin of a cliché narrative? Is it enough to be meta? I don’t mean to suggest that any meta-commentary would be a ploy to seem “creative”; I am genuinely curious. Why do I get so much pleasure from the laugh/awwhh reaction? Is it a story at all worth writing about? Fine then: I want to write my life as melodrama.

All characters appearing in this work are fictitious. Any resemblance to real persons, living or dead, is purely coincidental.

A play. I’m well versed in melodramatic theater; as a small child in acting camp I was placed in the melodrama company. Maybe—

Rock and Biff recline on the hood of Biff’s car. It is the summer after their sophomore year of high school. Eve-‐ rything in their lives is changing. They both face up, staring at the sky. Neither of them speaks for a long moment.

I meant to tell you Biff, I ran into Dorothy to-

Never say that name to me again! She tore my heart out Rock, and I can’t forgive her.

There was no way for you to have known, Biff… known her heart was black as tar.

After everything with Hannah…It was supposed to be perfect with Dorothy, Rock. I had all my hopes pinned on this one night—the night of the Ratatat concert.

Rock turns to look Biff squarely in the eyes.

I’ll never look her in the eyes again, Biff.

I’m interested, though, in the other forms melodrama might take. Serial romance comics, Girls’ Romances, published by DC, popular in the fifties and sixties. A common practice in comics is to bold and italicize, in combination, certain words—for  emphasis. Girls’ Romances used the italibold to great melodramatic effect. For example: 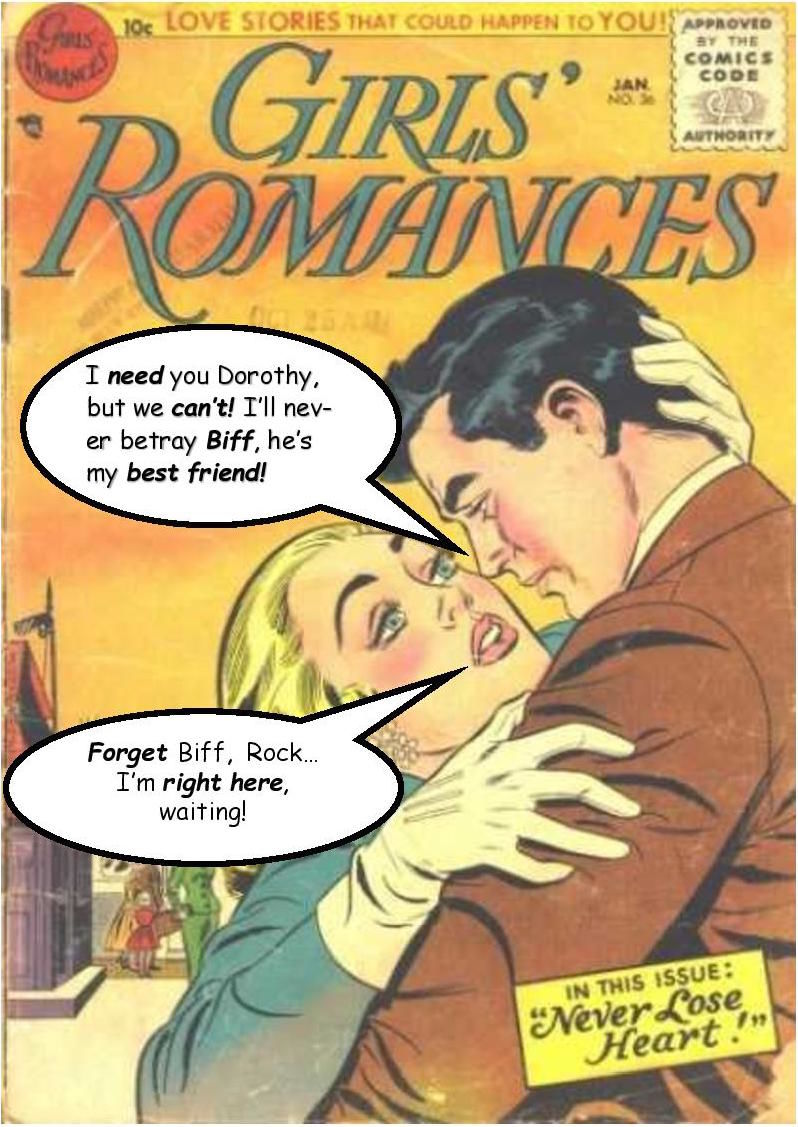 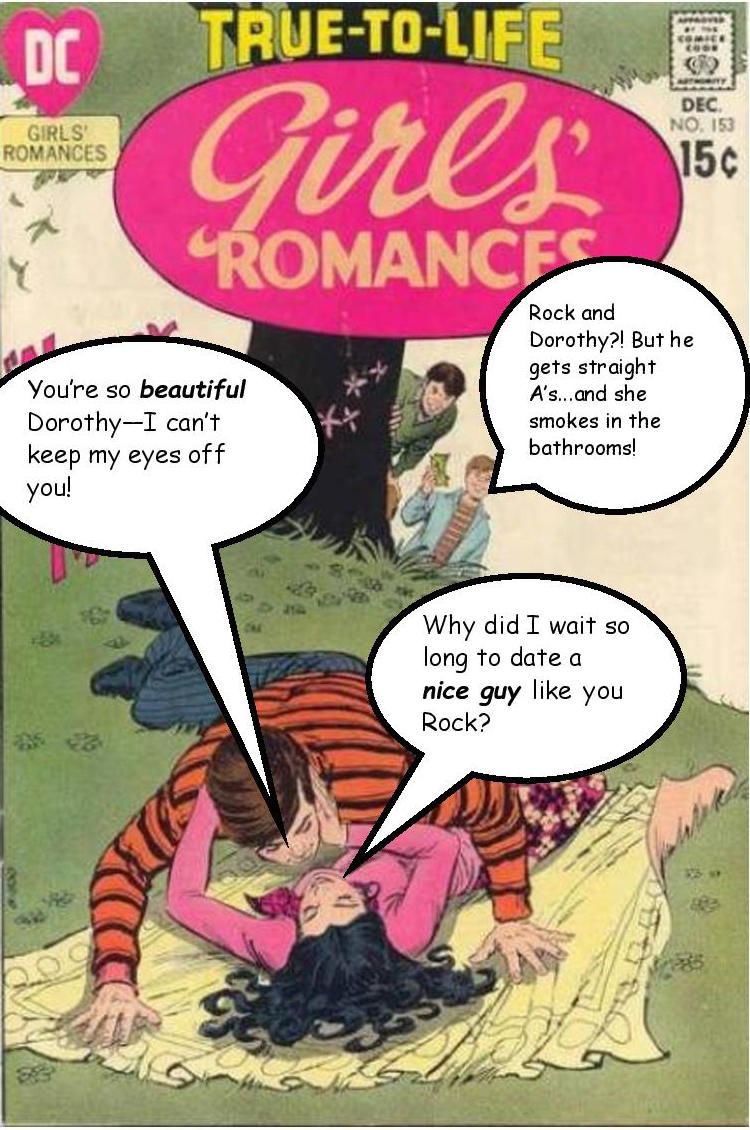 Even more than italibold, I’m enchanted by Girl’s Romances’ covers. Running along the top:

“Love stories that could happen to YOU”

Is this a threat?

“Love stories that could happen to YOU”

Girls’ Romances is credited to Mike Sekowsky, Gene Colan, Lee Elias, Gil Kane, Win Mortimer, Bob Oksner, John Romita, Sr., John Rosenberger, Art Saaf, Jack Sparling, Alex Toth, and George Tuska. Were the tales taken from their own lives? Certainly there was a degree of fantasy, a group of grown men dreaming of girls’ romances, how they might differ from their own.

Why stop with comics? Other forms—Cinema: the trailer, with voice over—

“He was just a lonely young man, lost in melancholy”

“She a wild rebel, abandoned by drug addled parents at the age of 5”

“Their love seemed unbreakable, until that fateful night…”

Movie trailers and Girls’ Romance share this: the frozen look, the teary face turned to the camera, framed in a panel. Images I can return to at night, fill in with Dorothy’s (or is it Kayla’s?) face, perfect teeth. I was surprised; she never had braces.

Is there melodrama in the romance novel? No image, but the tantalizing prose, the dog-eared page.

They had known, upon arriving at Mary’s wooded cabin, that it would be a night to remember. Now that they were finally alone by the rope swing, Dorothy could feel her heart thumping against her ribs. She watched Rock grip the thick rope, his biceps straining. He turned to her and smiled, that impossible smile that made her stomach do somersaults. Suddenly, in one smooth motion, he was in the air, straddling the wooden disc with his tight thighs.

“Don’t worry! I won’t let you fall”. As Rock swung back towards her, he

reached out his hand. She grabbed the rope and jumped as he gripped her waist, holding her body tightly against his. She felt herself flying through the starry night, freer than she had ever been. Her legs wrapped around him…

This was not the memory I wrote at first, just after the fact; it’s two degrees separated. At first, it wasn’t a melodrama. The melodrama requires a distance, a memory lapse. I don’t want to reduce melodrama though, its origins, to a tool for a boy to cope.

When I say “it wasn’t a melodrama” I mean: it was, to a greater degree, accurate.

For example, when I tell it dry:

Kayla texted me, “Hey can I pick you up? I need to talk to you”. I responded, “Yeah, definitely!” She picked me up in her grandmother’s car, a Chrysler Spit Fire. We drove to the base of the “H Rock”, where we had kissed for the first time. She said “I had sex with someone at the Skrillex concert. We probably shouldn’t do this anymore.” I opened the door. “I think I’ll walk home.” She preferred to give me a ride. I let her.

But here the prison between accuracy and narrative is suffocating. On the one hand, it has the beginnings of a craftedness that marks “story”: the H Rock recurrence, the Skrillex reference for a quick laugh. On the other, though, it’s too stuck to the facts to arrive at any fruition; it’s only a convenient template, something I can use again and again. Melodrama is about excess, how a person’s emotions could escape them, rip through the screen and startle you. This is what I meant by two degrees separated; a memory becomes a stuck narrative before, given an unsubdued form, it might surprise you.

But melodrama is unfashionable. This is, after all, a nonfiction essay. A form which requires an official definition upon which I can elaborate with clever wordplay, borrowing and lightly mocking some form of technicality. Such as:

Melodrama: “a sensational dramatic piece with exaggerated characters and exciting events intended to appeal to the emotions.”

“Sensational.” The summer appealed to my senses; that much I’m certain of. I remember clearly the smell of her camel cigarettes mixed with the leather seats of her little Saab. They say smell -memory carries more intense emotional associations than any other sense. Perhaps therein lies the key to the nostalgia of melodrama; the ephemeral whiff of the unknown sending you hurtling backwards through time, every sensation and emotion writ large by the depth of the smell.

Is this what my story lacks in its original state (the structure from the past-love conversations, the memoir -heartbreak)? A palette of smells to accompany it? I think, sometimes, that my usual heartbreak narrative is too grounded, self-conscious, unwilling to sob in the back row of the theater, nose sniffling. Like I said, these conversations about past loves have a particular rhythm. Melodrama is the same; more than anything else it’s generified. There’s a particular opportunity in this, to exceed the strict rules while using them, to have fun, precisely because the rules exist so starkly. Isn’t that a subversion all its own? Imagine your favorite soap opera—it feels naughty. There is nothing naughty in writing simple memoir-heartbreak, which is too self -conscious to appreciate the danger of leather and cigarettes. When I was sixteen I would have understood this.