On the East End of London in 1961, theater producer Joan Littlewood was thinking about ways to disrupt theater-going experiences that favored a bourgeois audience. She conceived of an immersive performance style in which the congealed membrane between actor and audience melted. When an audience entered a typical theater, they understood that it was their bodies’ role to sit still and be polite. Littlewood wanted to encourage the opposite. She wrote an article in the New Scientist in which she described her imagined theater:

Choose what you want to do – or watch someone else doing it. Learn how to handle tools, paint, babies, machinery, or just listen to your favorite tune. Dance, talk or be lifted up to where you can see how other people make things work. Sit out over space with a drink and tune in to what's happening elsewhere in the city. Try starting a riot or beginning a painting—or just lie back and stare at the sky.

Littlewood imagined an informal physical space that lacked permanent structures. She mused that some of these structures might not last more than ten years, some not even ten days. “No concrete stadia, stained and cracking, no legacy of noble contemporary architecture, quickly dating ... With informality goes flexibility,” she wrote. Unlike the rigidity and exclusivity of an average theater in Britain at the time, her new theater, The Fun Palace, would change according to the desires of its visitors. In the years that followed, she worked with architect Cedric Price to devise a structural embodiment of her idea. 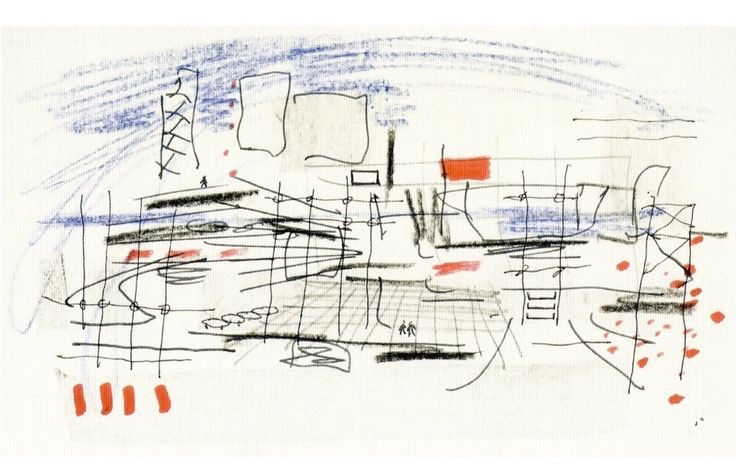 Although The Fun Palace was never realized, it marked the conceptual birth of the movement that became known as soft architecture. The “soft” aspect of soft architecture might literally refer to soft materials, structures, or sounds, or it might figuratively allude to an emphasis on change, process, and interactive methods of problem-solving and design. But really, the dichotomy of soft versus hard materials is irrelevant: a structure made out of cement or stucco can still act soft.

The plan was that the The Fun Palace’s skeletal, scaffold-like framework would be in constant movement. Its components would vary in shape and size. Escalators, walkways, and balconies would interact with each other and liberate the occupant’s path of movement. The scaffolding’s ephemeral quality would recall its uncertain lifespan. Instead of the lasting institution of a grand theater, The Fun Palace would be a place of change, renewal, and destruction. Cedric Price wrote of his Fun Palace design: “The elimination of the word ‘success’ is important. The place is a constantly changing experiment in which the old human categories are forgotten, e.g. brilliant, superior, stupid, dull. Each is capable of what was once called genius.” Experimentation was valued over dictation, potentiality over certainty. As bodies inevitably transform and meld, soft systems are a means of acceptance. Soft structures are built to match the bodies inside of them, to change and age and melt like they do.

The Fun Palace inspired the 1977 construction of the Centre Georges Pompidou, a modern art museum and public library in Paris, which looks as if it is made entirely out of scaffolding. The building’s guts are color-coded and displayed on its exterior: air ducts are blue, water pipes are green, electrics are yellow, and elevators and escalators are red. Unlike the Louvre Museum, a former royal palace with impermeable walls of white concrete, the Pompidou challenges fixed barriers and invites interaction. Another soft project that unravels norms of conventional workplace etiquette is Hans Hollein’s 1969 inflatable mobile office. Combining softness and nomadism with work, the structure collapses the office cubicle. Yet on some level, Hollein's mobile office is ironically suggestive of the widespread demise of the traditional office in the late 20th and early 21st centuries, when open, flexible work places, decorated with snack walls and egg chairs, would become central to new management strategies. One can't help but think of the bowling alleys and adjustable desks that adorn Google’s offices, their primary function being to fuel company commitment and maximize productivity. 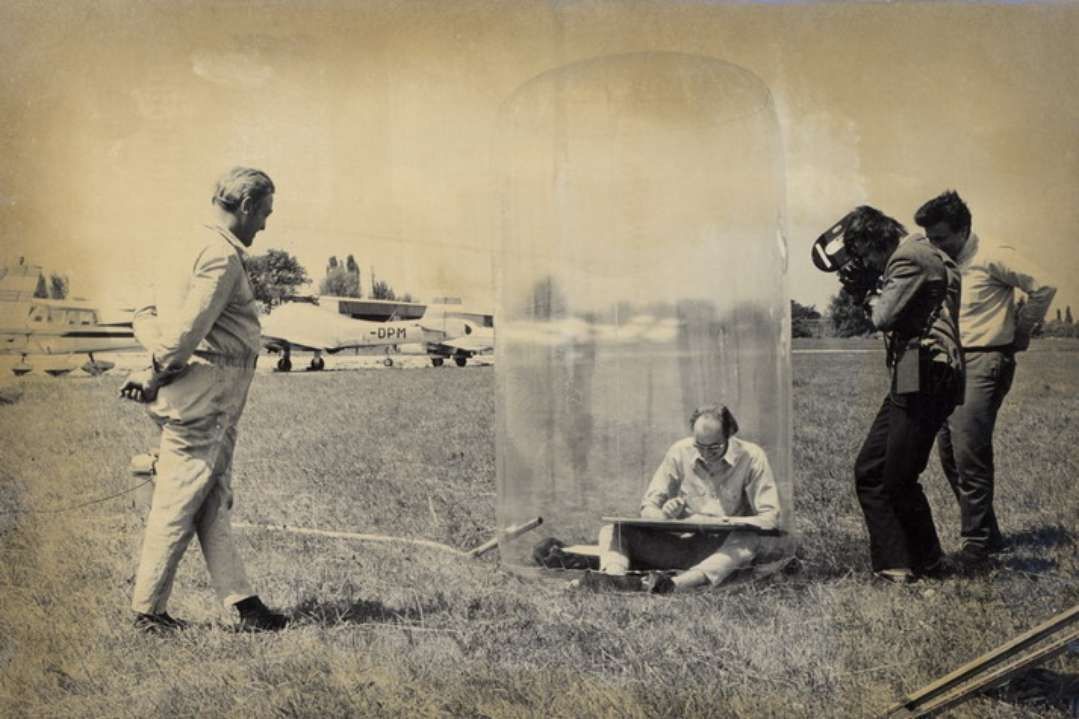 Imagine a typical suburban house. In order to get water flowing out of the kitchen sink, without question, the faucet must be turned. Outside, Belgian block separates my driveway from yours. Inside, the floor is flat. That room over there is where mom and dad sleep soundly, that room over there is where we all watch Sunday night football on the couch while we eat Domino’s pizza. The Bioscleave House (Lifespan Extending Villa), designed in 2008 by husband-and-wife architecture/poetry writing team Shusaku Arakawa and Madeline Gins deconstructs this archetype. Its foamy and uneven interior terrain knocks its inhabitants off balance. To navigate certain areas of the house, you might be better off crawling or sliding than walking. Arakawa and Gins believed that living in a typical house, in which we know how we are supposed to move and behave, halts creativity, promotes staleness, and eventually ensures death. “It’s immoral that people have to die,” Gins told the New York Times. A radical re-figuring of how a body might normally move is intended to stimulate one’s immune system and emulate a deathless life. The Bioscleave House’s structural strangeness is meant to ward off death by exercising and productively confusing its inhabitant.

The couple formed The Reversible Destiny Foundation, whose mission is to think about extending lifespans through procedural architecture. The viability of The Reversible Destiny model is vague. Both Arakawa and Gins died in their early seventies, but still, the bodily performance that is required to navigate their spaces certainly exercises numb bodies and unlocks youthful spirits. Arakawa once described the experience of elderly people in a building designed by the couple in Mitaka, Japan, stating that some navigated the space by moving “like a snake” across the floor. “Three, four months later, they say, ‘You’re so right, I’m so healthy now!’”

Yoro Park, another one of the couple’s projects, is a death defying playground. There are no monkey-bars from which we are supposed to swing, or sandboxes from which we are supposed to dig, but instead undulating and disorienting planes and paths. Arakawa and Gins believed that the “juggling, jumbling, and reshuffling” of the body that is required to navigate the park, “introduces a person to the process that constitutes being a person.” Experimentation and non-normativity is at the forefront of these projects, further expanding upon Littlewood’s vision of a soft space. Similarly, upon entering the space, a body cannot predict how it might behave. 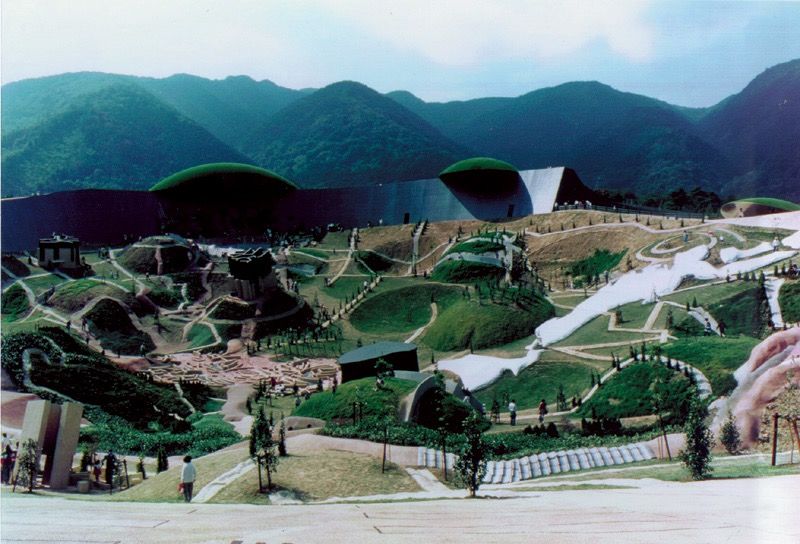 Yoro Park and the Site of Reversible Destiny

German artist Rebecca Horn’s work functions as an apparatus of soft architecture. In the same year both of her parents died, Horn contracted a lung condition after working with glass fibre without wearing a mask. In her sorrow and isolation, she began experimenting with sculpture and creating performance pieces that communicated through bodily practices. Her work became known as body-extension sculptures. The condition prohibited her from sculpting with glass fibre or polyester, and she instead adapted to working with softer materials. When she was confined to her bed, she started sewing and creating sculptures from balsa wood and cloth. Horn’s sculptural prosthetics extend her body’s ability to reach-towards.

Horn’s 1972 piece, Feather Fingers, in which the performer attaches a feather on metal rings to each finger, explores touch through prosthetic sculpture. When wearing the feather fingers and touching one’s own body, one’s sensitivity to touch heightens. The sensation requires the feathers’ touch, and yet, the movement stems from the wearer’s body. Horn described the effect: “It is as if one hand had suddenly become disconnected from the other like two utterly unrelated beings. My sense of touch becomes so disrupted that the different behavior of each hand triggers contradictory sensations.” She demonstrates that touch displays an urge to depart from one’s own body and reach-towards other bodies. Horn explores sensation and interaction in her performance piece Unicorn, in which the wearer walks through a field wearing a unicorn horn and body straps identical to the ones depicted in Frida Kahlo’s 1944 painting Broken Column. Kahlo painted Broken Column shortly after undergoing spinal surgery. 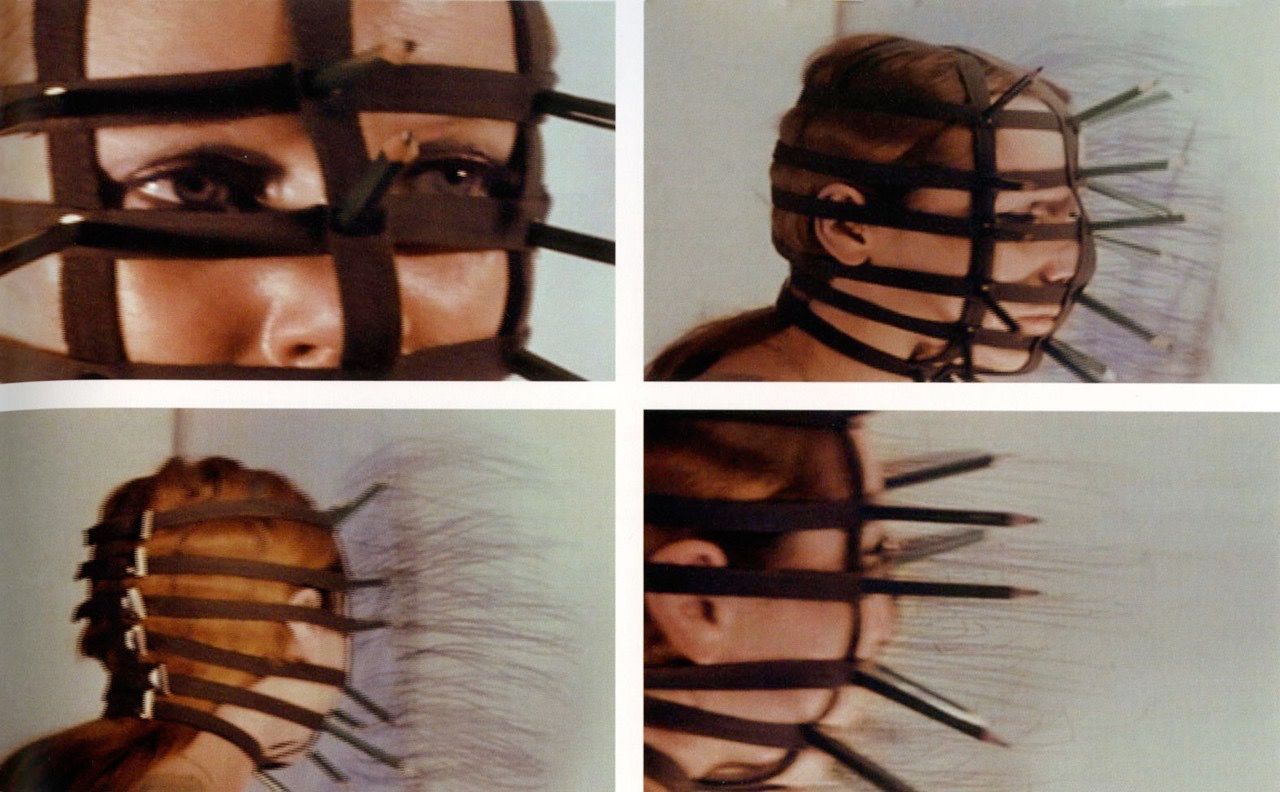 In her performance pieces, Horn aims to absorb the role of the spectator into that of the performer. Artist Shasti O’Leary Soudant wrote in an essay that Horn’s work is an effort “to heal the separations between our conscripted bodies and our alienated psyches,”; she “employs a plurality of resistances, ensuring that no single strategy congeal into an unstable core of insurgency.” From this encounter of spectator and performer, bodies and sensual repertoires are expanded. In this process, a sensory transformation occurs, an event that Horn calls “pure art.”

The behavior of soft structures likes Horn’s work is linked to theorist Erin Manning’s thoughts on touch and tactility. Manning writes, “To touch is to become aware that I am not fully formed.” To touch is a risk-taking, political act. Manning describes a multiplicitous self that is constantly globbing onto other multiplicitous selves. An entwinement of identities nurtures an empathetic, self-less self. This notion challenges traditional identity politics. Manning writes that interactions of touch are not about “subjectivity,” but rather about “intensity, potential relations.” Poet Lisa Robertson takes up similar ideas in her book Occasional Work and Seven Walks from the Office for Soft Architecture. “Under the pavement, pavement,” she writes. In Robertson's writing, surfaces and identities meld into one another; soft architecture concordantly moves away from what Robertson calls “the holy modernism of the white room,” opting, instead, for elaborate surfaces that hold the potential to rub against other elaborate surfaces.

In his 2002 novel The Father Costume, Ben Marcus describes a young boy who dreams of creating something akin to a soft system that would stabilize his father’s unpredictable and violent nature: “If it were up to me, I would dress my father in a long, clear sleep costume. I would knit linens from my mother’s abandoned luggage and spray them from the costume gun onto my father…If it were up to me, I would soak my father’s hands in milk, then fit them with gloves of hemp. I would use the leftover milk to make a writing.” Soft apparatuses hold the potential to alter states of accepted normativity. Soft architecture is adaptable; it might take shape in the form of scaffolding at a construction site, or appear as honeysuckle vines draping a fence. It can adorn a body or take shape as bodies interacting with other bodies. Sticky surfaces and permeable membranes are everywhere. Lisa Robertson proposes that language is itself soft. “Words are fleshy ducts. Description decorates.”