We Are Not Paris


On January 10, 2016, over 1,128 Turkish and foreign academics, including Turkish writer Orhan Pamuk as well as US scholars Noam Chomsky and Judith Butler, signed a collective statement titled “We Will Not Be a Party to This Crime.” This petition calls what is currently happening in Turkey a “deliberate and planned massacre.”

According to the Human Rights Foundation of Turkey, over 310 civilians have been killed due to actions the Turkish state has taken against its Kurdish population. Most sources place the start of the insurgency against Turkey’s Kurds on August 16, 2015 when the Turkish government declared a curfew in Muş, a majority Kurdish city, after an alleged attack from the Kurdish guerilla force, The Kurdistan Workers’ Party (PKK). A cascade of curfews and other restrictions followed in nearly every major Kurdish city. The restrictions in Muş lasted 20 hours but curfews in the cities of Sur, Cizre, and Silopi lasted over 100 days. In these places, an around-the-clock curfew came with travel bans, power cuts, and interruptions of communication including removal of internet and phone services. In many areas, these restrictions have led to widespread hunger, and have led activists to accuse the Turkish state of intentionally starving Kurdish communities. “We Will Not be Party to This Crime” offers such a condemnation:

“The Turkish state has effectively condemned its citizens in Sur, Silvan, Nusaybin, Cizre, Silopi, and many other towns and neighborhoods in the Kurdish provinces to hunger through its use of curfews that have been ongoing for weeks. It has attacked these settlements with heavy weapons and equipment that would only be mobilized in wartime.”

Turkish military forces have entered Kurdish cities with stunning brutality, carrying out shell bombing and lighting fire to vast numbers of buildings, as well as using heavy artillery and snipers to target “insurgents.” While the Turkish government claims to be targeting terrorists, the Human Rights Foundation of Turkey counts as many as 72 children, 62 women, and 29 people over the age of 60 among the 310 civilians killed. It also notes that 180 of these murders occurred while the victims were within the walls of their own home. These numbers, while shocking, are understood to be vast underestimations due to the lack of basic services and communication within the targeted areas as well as minimal judicial proceedings being taken up to address these crimes. Precise numbers of “terrorists” or “insurgents” killed in comparison to the civilian deaths are largely unclear or unavailable, but it is difficult to imagine that any number of “justified” killings could excuse the over 300 innocent lives lost. Through this mass violence and isolation of Kurdish communities from the rest of the country, the Turkish state is waging an ethnic war against its own citizens.

Kurds, an ethnic minority in Turkey that comprises roughly a quarter of the population, have a long history of facing oppression from the Turkish state. Beginning with the declaration of the Republic of Turkey in 1923, the nationalization project of the young Turkish government included homogenizing the population, and therefore necessitating erasure of the Kurdish identity. A year after the proclamation of the Republic, Turkish leader Atatürk passed a law that stated: “the people of Turkey are called “Turks” regardless of religious or racial differences.” This erasure of the Kurdish identity included, among many measures, persecution if one was caught speaking the Kurdish language. Selahattin Demirtaş, who leads the pro-Kurdish parliamentary party explained to the New York Times in an op-ed on March 13 that, “When I was growing up in the 1970s and 1980s, we were not allowed to speak Kurdish, speak about speaking Kurdish or even sing in Kurdish. I became a human rights lawyer in part because my older brother went to jail for trying to do grassroots activism — just organizing peaceful demonstrations under a political party was enough to get him labeled a terrorist.” In 1984, after years of enduring such forms of marginalization, and after the government had continuously denied the Kurdish people’s request to have the right to education and legal defense in Kurdish (among many other demands) the PKK declared war on the Turkish state.

In the years following the formation of the PKK, the Marxist-Leninist guerilla organization has used varying tactics to make claims for recognition and independence, some of which have been violent. The PKK is an armed movement whose activities over the past 40 years include the bombing of the Turkish consulate in Strasbourg, France and the establishment of military training camps in the mountains between Turkey and Iraq. Turkish political parties have often manipulated the portrayals of such activities in order to engender fear within the Turkish population and gain political power. Most often, PKK actions and other Kurdish organizing (including non-violence) have been framed as a threat to the unity of the country and allowed Turkish leaders to garner votes, especially from the western, less-Kurdish half of the country.

Today, Turkey’s president Recep Tayyip Erdoğan is engaging in this same rhetoric to hold on to his and his party’s near-authoritarian power within the Turkish government. His Justice and Development Party (AKP) has won a majority of Turkey’s parliamentary seats for the past 13 years. During this time, Erdoğan has expanded his powers so extensively that many within Turkey and without now consider him akin to a dictator. In 2010, he proposed a referendum in which the parliament would be granted the power to choose members for the Constitutional Court. This made the Constitutional Court less democratic by giving Erdoğan leverage within the judicial system. This would enable him to escape legal accountability in the following years. As of 2015, Erdoğan has been negotiating a constitutional change with party leaders that would shift Turkey from a parliamentary system with both a president and prime minister to an exclusively presidential system. With a supermajority in parliament, he and his party could pass this change and grant him even more unchecked power than he currently has. Largely in reaction to this attempt, Turkish voters rallied around the pro-Kurdish, left-wing political party, the People’s Democratic Party (HDP), which had historically received minimal support and gained no seats in the Turkish parliament. This surge in votes during the June 2015 parliamentary election allowed HDP to claim enough seats to upset AKP’s supermajority, and therefore block a constitutional change. Unsurprisingly to most, Erdoğan called for a re-election on November 1, 2015, which resulted in a loss of seats for HDP, and another majority win for AKP.

Most Turkish analysts see the current violence against Kurds as Erdoğan’s direct response to their challenge to his power. Demirtaş, who co-chairs HDP, stated in the same op-ed that, “there is no doubt about what motivates Mr. Erdoğan’s continuing military campaign. He is stoking nationalist sentiment with an eye to a possible referendum this summer that would expand his constitutional powers.” In order to gain votes (and especially take them away from HDP) Erdoğan’s current actions in the east of Turkey work to frame Kurds as terrorists, and capitalize on existing ethnic tensions by rekindling the Kurdish-Turkish conflict.

Gaining these constitutional powers comes at a cost: Erdoğan is blatantly disregarding international law, and committing massive human rights abuses including curfews that deny basic liberty and mass violence that kills the innocent—and no one is stopping him. Although the Turkish state’s violence against the Kurdish minority has gained attention in left-wing news sources, it has received little mass media visibility. Accounts of violence against Kurds in Turkey have been slow to surface in part because the Turkish state has worked to actively repress reporting. Police forces are shutting down anti-government protests, and jailing journalists reporting on Kurdish populations in the east (they also arrested many of the academics who signed the “We Will Not Be Party” petition). As part of a widespread crackdown on the press, Turkish government forces recently raided and seized control of a large anti-Erdoğan independent paper, Zaman.

In addition to direct censorship by the Turkish state, violence against the Kurds has also been met with silence as a result of Western bias in mass media coverage towards Turkey in general. The unequal attention to tragedy in Western and non-Western cities has been highlighted by the intense media (and social media) outrage after recent ISIS attacks in major European cities. 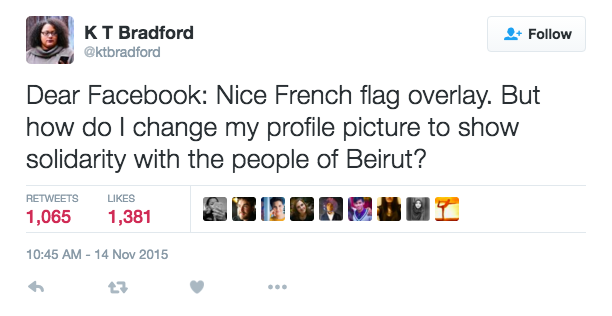 The most attention violence in Turkey has yet received was coverage of a bomb that detonated in Ankara, Turkey’s capital city, on March 13, 2016, killing 37. Still, it paled in comparison to coverage of bombings in Brussels, for instance. Many noticed this discrepancy and called attention to the bias on social media: 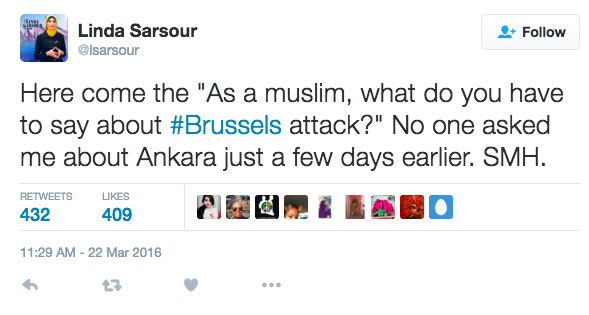 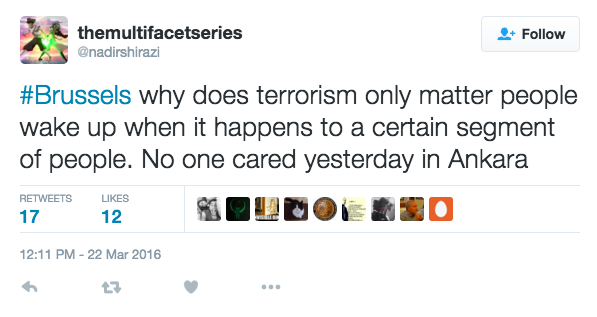 While much of the social media attention to violence in Turkey denounced Western bias within mass media, some of this backlash in fact worked to further perpetuate Western bias.

“You were Charlie, you were Paris. Will you be Ankara?” was the title of an exceedingly popular Facebook post written by James Taylor, an Englishman who lives in Ankara. While appearing to have a promisingly critical title, the post argues that, “Contrary to what many people think, Turkey is not the Middle East,” in fact it is just like any other European city. “Just imagine it happening in London,” he asks of the reader. Taylor also notes that Turkey should be thought of as distinct from other majority Muslim countries because it has characteristics, like an advanced bus system, similar to a Western city.

Ironically, Taylor and others—including Turkish users—who spread this post or repeated this general idea in so many other articles and comments, perpetuated the same Western bias they aimed to challenge. In reframing Turkish cities as European, their framework requires a life to be Western in order to be valued. Following the lack of international concern displayed for tragedies in Ankara, Beirut, Lahore, and locations that have been even further ignored, there must be cries for responsibility within media coverage. However, pleas for solidarity and empathy must be rejected if humanization is equated with Westernization. Contrary to Taylor’s claims, Turkey is, in fact, part of the Middle East—many Turks identify as non-Western and non-European. Not regardless of, but with regard to these characteristics, violence in Turkey deserves just as much attention as violence anywhere. A life does not have to be Western, a body does not have to be white, a city does not have to be European to have value or visibility.

Furthermore, within a Eurocentric framework, it becomes impossible to value any part of Turkey other than large, partly Westernized cities such as Istanbul and Ankara. Diyarbakir, the largest Kurdish city in Turkey, with its now demolished mosques, emptied old city streets strewn with debris, and other remnants of recent state violence, does not look like Paris. Considering the minimal coverage of the tragedy in Ankara, can Turkey’s Kurdish population have any confidence in the international community to raise alarms over their oppression?

In addition, it’s worth noting that while the Ankara incident was claimed to be terrorist violence, the massacre in eastern Turkey is being carried out by the state. In the eyes of most media, this affords such violence a certain amount of legitimacy—a myth that would be rectified if the media lens were directed as it should be: towards those most on the margins. This includes, as of now and with no end in sight, Turkey’s Kurds.