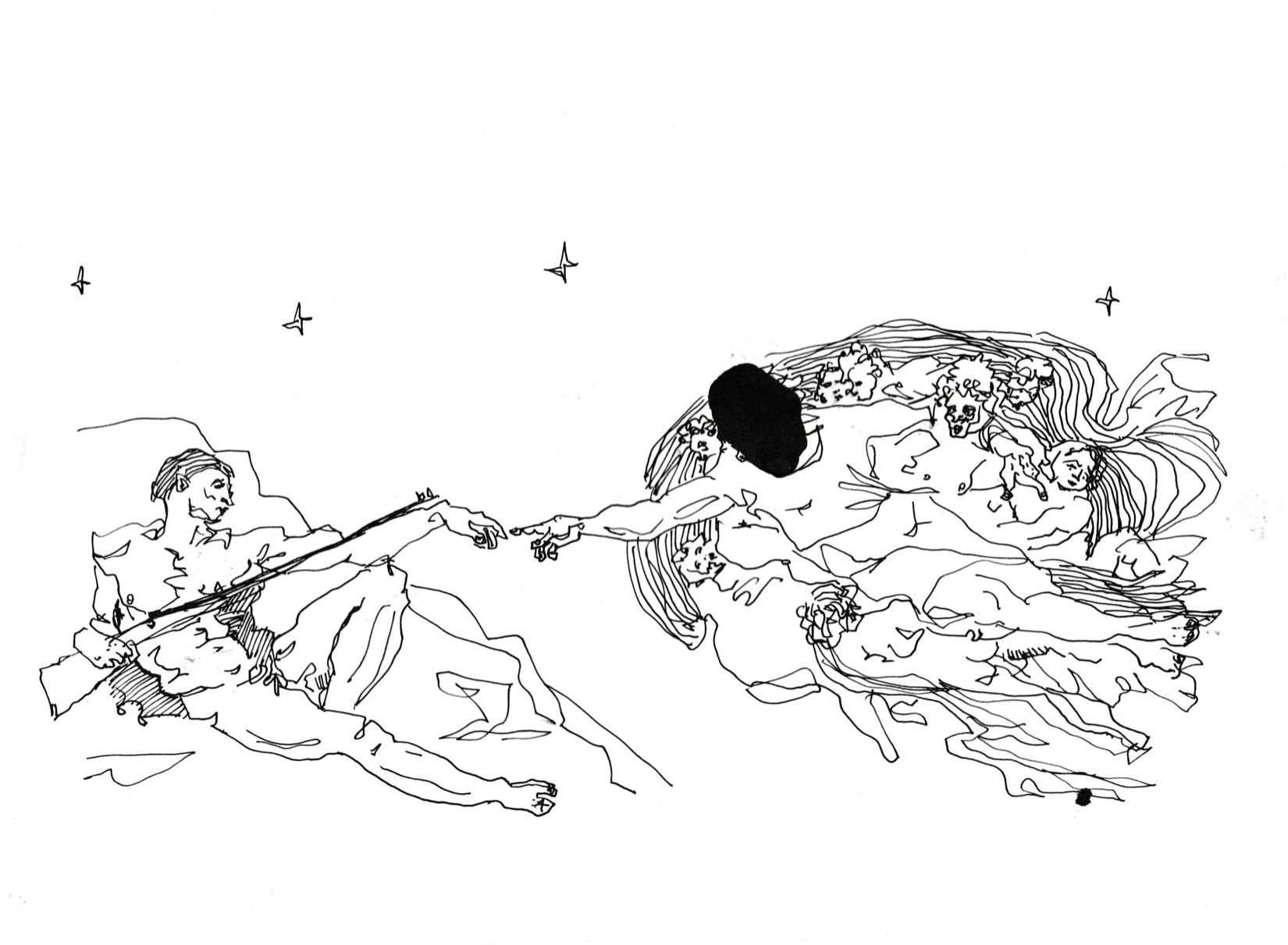 In what is perhaps the most unexpected political power couple to emerge in 2016, failed Republican and Democratic presidential candidates Mike Huckabee and Martin O’Malley announced last week that they might start a band. Speaking to ABC News after a joint press conference on the presidential race, O’Malley told reporters, “We were talking on the walk over here … about tunes we could probably do together—so we’re working on that.” Democrats and Republicans might be stuck in perennial gridlock, but the former Arkansas and Maryland governors are out to kick down barriers (with twelve-inch black leather boots) and rebuild partisanship (with a kickass set of hammers or something). “If Martin O’Malley and Mike Huckabee can get together on the same stage and come to harmony, that would be historic,” Huckabee told ABC. “It could be massive, we could sell tickets to that, and we’re both looking for something to do.” It’s punk rock to the core, but should we even be surprised? True fans of the politicians know their early, unpolished but artistically innovative work: Huckabee in his classic rock and slow jam cover band, Capitol Offense and O’Malley in his face melting Celtic rock group O’Malley’s March.

Huckabee’s rock and roll roots run deep, according to www.runner.convio.net—a Huckabee information resource paid for by the Huckabee for President Exploratory Committee, Inc. “Young Mike Huckabee played and practiced until his fingers were raw and tender,” the site notes. “But by the time he had turned 12, he was playing well enough to join the first of several rock-and-roll bands.” Huckabee’s finger-bleeding days continue with his four-string electric bass and rag-tag group of Arkansas buddies that make up Capitol Offense. The band has appeared on bills with the likes of Willie Nelson, Percy Sledge, .38 Special, Grand Funk Railroad, and REO Speedwagon.

Not one to be outdone, O’Malley began his Irish music project in 1979 as The Shannon Tide with his Gonzaga High School football coach, Danny Costello. After O’Malley’s graduation, The Shannon Tide’s inevitable breakup, and years of gigging solo, the former governor founded O’Malley’s March in 1988 and has maintained an on-and-off presence ever since. But O’Malley’s recent presidential failure means good news for his screaming, underwear-throwing teenage fans: O’Malley’s March is kicking back into gear and touring semi-regularly. “It’s great to be playing with [O’Malley] again,” bandmate Jared Denhard told Annapolis’ Capital Gazette. “We didn’t do anything without him.”

The stars are aligning, and the Huckabee/O’Malley crossover just might rival that of Axl Rose’s recent addition to AC/DC. It’s a classic tale of industry and success: after an exhaustive few years of touring, sexual awakenings, drugs, and experimenting with Kraut Rock, it’s likely that Huckabee and O’Malley will split over unresolvable creative differences—Huckabee writes the songs but O’Malley gets the glory (he’s better looking after all). Perhaps, after years of unsuccessful solo ventures and tabloid controversies, they will even book a reunion tour. Following a long tradition of rock stars entering the political sphere, the duo might use their cultural capital for political good. Maybe, just maybe, in an all but inevitable twist of fate, they’ll make a run for president. Again.

Rachel Dolezal is back at it again, this time with a book deal. Dolezal, who achieved infamy last year with her unsuccessful proclamation of Blackness, is now publishing a book about her thoughts on race, culture, and ethnicity. Since being forcibly outed as white, she lost her role as president of her local NAACP chapter and her professorship at Eastern Washington University. Simultaneously, she gained notoriety through the quick circulation of social media, including twitter hashtags such as #blackfished, a portmanteau of catfish and black, suggesting the insidious implications to Dolezal’s racial bait and switch.

Grasping at relevance, and perhaps cash, Dolezal revealed on the Today Show that she signed a contract with BenBella Books, a small publishing firm. In the uprooting of her normal life resulting from the revelation that her parents are indeed white, Dolezal may have found that BenBella’s modest advance (their typical offer is between five and ten thousand, plus royalties) was better than nothing. Dolezal is writing the book to fill in the margins for those who don’t fit into traditional racial or ethnic categories, something she claims to have been studying for a long time.

That being said, autoethnography does not a theory of race make. And while Dolezal is highly capable of regurgitating Toni Morrison—quipping “race didn’t create racism, but racism created race,” as a defense for her own ethno-racial evolution—that clearly doesn’t pay the bills alone. Not when perms (or wigs?), tanning salons, and bronzer rack up such a high cost.

In her exclusive interview, Dolezal asked provocative questions like “Is there one human race?” and “Why do we still want to go back to that worldview of separate races?” On the Internet, eyes rolled. The Root released an article titled “105 Real Black Women More Deserving of  Book Deals Than Fake Black Woman Rachel Dolezal.” Vanity Fair called her the “identity-crisis poster child.” Vocativ, holding nothing back, wrote “the woman who once self-identified as black is now self-identifying as an author.”

Can Rachel Dolezal catch a break? Maybe she doesn’t deserve one: her critics ask how a woman who taught classes like “The Black Woman’s Struggle” could fail to recognize the absurd privilege in her own race-bending. But regardless of what everyone else—perhaps literally, everyone else—thinks, Dolezal is sure about who she is. She may have been born white, but she identifies as Black.

If you’re still confused, her book comes out next March, and she has a TED Talk going online soon.

On a desk featuring a holstered gun atop a Bible, Mississippi Governor Phil Bryant signed into law a bill that will allow guns in churches. Surrounded by clapping, smiling legislators, the 64th Governor of the Magnolia State proudly authorized the Church Protection Act. On April 15, 2016, the same day he signed the legislation, Bryant sent out a triumphant tweet: “Churches deserve protection from those who would harm worshippers. That’s why I signed HB 786.” An accompanying Facebook post declared: “Today I signed House Bill 786 to give churches the right to protect themselves from those who would harm them while they worship. I’m a strong supporter of 2nd Amendment rights and will continue to advocate for your right to keep and bear arms.”

The act authorizes church members to undergo firearms training so they can carry guns into places of worship and provide security for their congregations. It’s unclear whether mosques, synagogues, and non-Christian places of worship are included in the act. The act also loosens gun permit requirements and allows people to carry holstered weapons inside churches without a permit. It is already legal under Mississippi law to carry a loaded, hidden handgun in purses, handbags, satchels, and briefcases without a license. What better way to ensure churchgoers’ safety than by recklessly allowing people to carry hidden and loaded guns in a public setting, without a permit?

Baptist pastor and State Representative Andy Gipson wrote the bill, which he says was drafted as a response to the massacre at a church in Charleston last year. Rep. Gipson commented on the need for small congregations to defend themselves against attackers. He also celebrated Governor Bryant’s decision on twitter by retweeting the NRA: “Victory in Mississippi! Governor Phil Bryant Signs #NRA-Backed Permitless Carry Bill Into Law!”

Deep in the Bible Belt where guns are commonplace, Mississippi is not alone in enacting the Church Protection Act. NRA spokeswoman Amy Hunter announced that the law makes Mississippi the ninth state with such a law. Other states that have passed unrestricted concealed carry laws include Alaska, Arizona, Idaho, Kansas, Maine, Vermont, West Virginia and Wyoming.

Despite the NRA-backed hoopla, putting guns in untrained hands is sure to only exacerbate gun violence. In the name of defense, churches have been made less safe from these deadly weapons. Thank God for Mississippi!