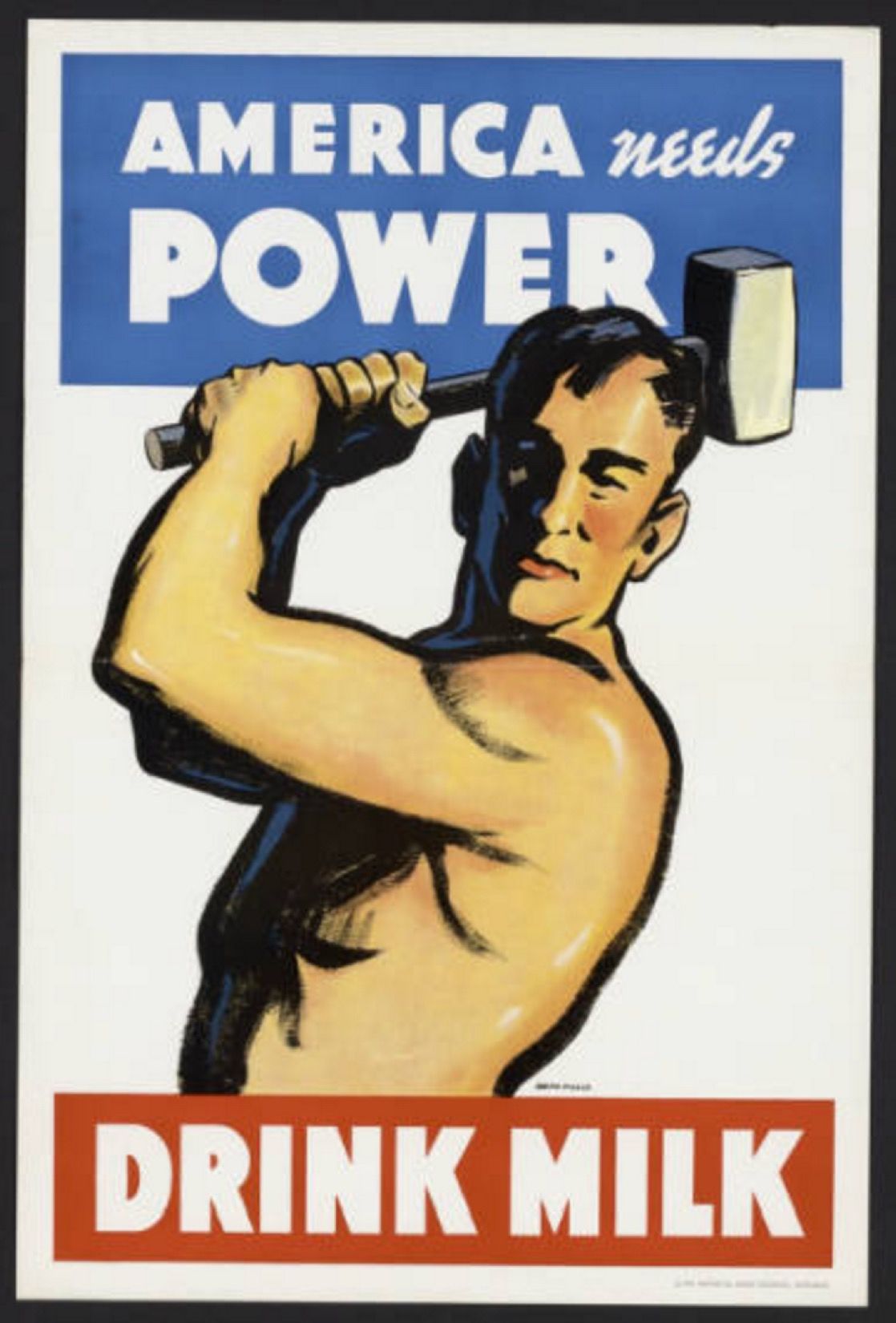 As a child, I vividly remember avoiding a bowl of fermenting mare’s milk at the foot of our kitchen pantry. So foul that even our most fearless cat Patrick wouldn’t go near it, the airag and its creamy stench was a treat just for my father. A far cry from his father’s childhood ger and the leather bladder that hung at its entrance filled with the fluid, my dad would toil with this vat, stirring it hundreds of times over the course of a week in a process that broke the lactose milk sugars down into a mild alcohol.

Along with much of Asia and Africa, the Mongols are an overwhelmingly lactose intolerant people, and for them, the process of making airag became a staple of nomadic life. When Mongolian herdsmen domesticated the wild horse nearly 5,500 years ago, they established a seasonal diet of wintertime meat, which was replaced by dairy staples during the summer foaling season, when meat consumption was rare. Mare’s milk (which holds significantly more lactose per serving than cow’s milk) became the essential contributor to the summer’s tsaagan idee, or “white foods,” that the Mongols viewed as “the essence,” containing a purity and health value ritualized through daily and ceremonial consumption. Naturally, the Mongols had to figure out a way to digest the milk, and naturally, we found it in the form of alcohol.

Biological evidence dating back to the Neolothic era suggests that lactose intolerance isn’t new, but instead occurred when the gene for producing lactase, the enzyme necessary for digesting breast milk, was turned off (or, significantly diminished) during childhood. Without the lactase enzyme, lactose essentially rots away in the gut, producing the flatulence and diarrhea that we know and love. This wasn’t really an issue, however, until the domestication of the mammal, when adults began consuming mammalian milks for the first time. 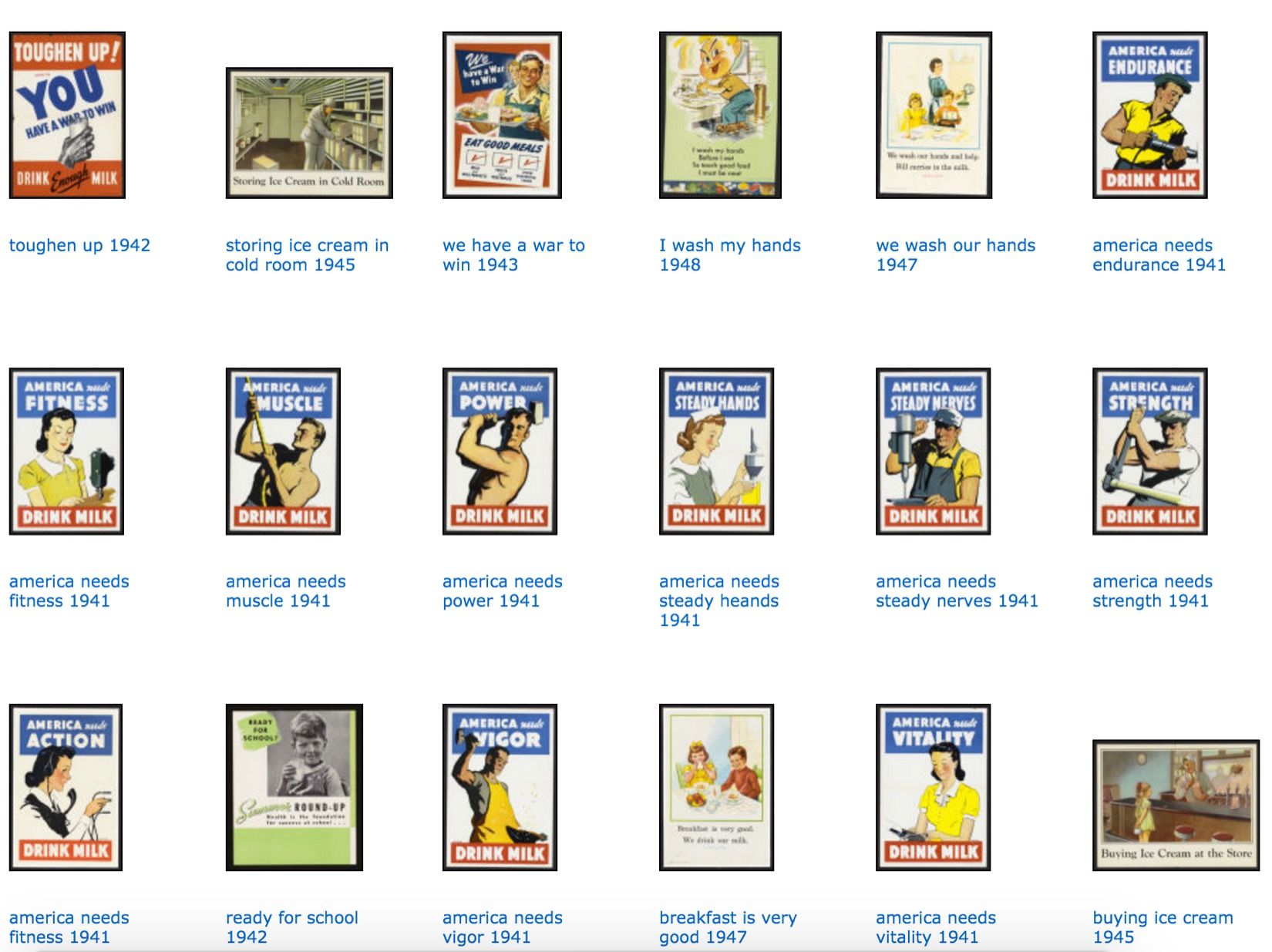 With the development of farming practices along the Fertile Crescent around 10,000 BCE, a newfound food surplus afforded the promise of specialized labor and a more complex society, and as such, the first cities were born. As these population centers grew dependent on agriculture, life in close proximity to irrigation systems and domesticated animals became a breeding ground for water-borne disease, and combined with the seasonally variable crop, malnutrition in early civilizations became deadly. At the same time, a genetic mutation appeared among some Anatolian farmers in which lactase production was never shut off. Evolutionary geneticist Mark Thomas explains that lactose tolerance provided a ridiculously high selection differential: those with the gene mutation survived, and those who couldn’t drink milk either died before they were able to reproduce or produced fewer, sicker children. Malnourishment exacerbated what would soon be the most rapid gene mutation in history: those adults who could digest dairy would live, and all others would die. Within a few centuries of gene mixing and the expansion of Middle Eastern farming practices to western Europe, eighty percent of Europeans became milk-drinkers.

The only adults who needed to develop this tolerance for lactose in the first place were those who could safely raise dairy herds and store fresh milk for more than a few hours at a time. Those who wouldn’t develop this gene mutation included populations in extreme weather climates, including tropical, desert, and Arctic communities, in addition to most nomadic traditions, turning lactose tolerance into an essentially European phenomenon. While most herding peoples had by this time discovered that yogurt culturing or cheese aging processes either decreased lactose content or equipped the dairy product with added bacteria and enzymes that aided in digestion, Europeans found themselves able to consume glassfuls of fresh, uncultured dairy without the unpleasant side effects. Today, an ongoing genome-mapping project suggests that 98 percent of the population of Denmark is tolerant while, by contrast, nearly one hundred percent of the population of Zambia remains intolerant. Thus, in response to the scurvy, rickets, and infectious diseases that were the mutual products of agriculture, domestication, and urbanism, lactose tolerance grew proportional to European population density.

By the late 16th century, cattle herds were introduced to the United States as an almost immediate product of British colonialism. In its early stages, Post-Columbian settler America relied heavily on dairy products for nutrients that were otherwise made inaccessible due to the new soils of the American continent. According to Andrea Wiley in her book, Cultures of Milk, it was from this dependence on cow’s milk that the now popular understanding of milk as the “idealized food…[an] icon of an equally idealized bucolic lifestyle with fresh, pure air” was cultivated.

Soon after pasteurization became a standard sanitizing measure for milk products in the United States, the National Dairy Council (which was established by dairy farmers to “protect the public’s good image of dairy”) began large-scale advertising efforts to capitalize on the understanding of milk as “the elixir of life,” as one pamphlet suggested. A book of nursery rhymes published by the NDC in 1920 reads, “Humpty Dumpty sat on a wall; Humpty Dumpty had a great fall, but it didn’t hurt him a bit, you see, milk made him healthy, as it has made me!” Along with the NDC, the United States Department of Agriculture published its first children’s food guide in 1916, grouping meat and milk into one of the five recommended food types. One advertisement around this time, which depicts a mother and two children sitting at a breakfast table reads, “Milk makes mentality! Begin today and feed them food that is body-building, mind-developing!” 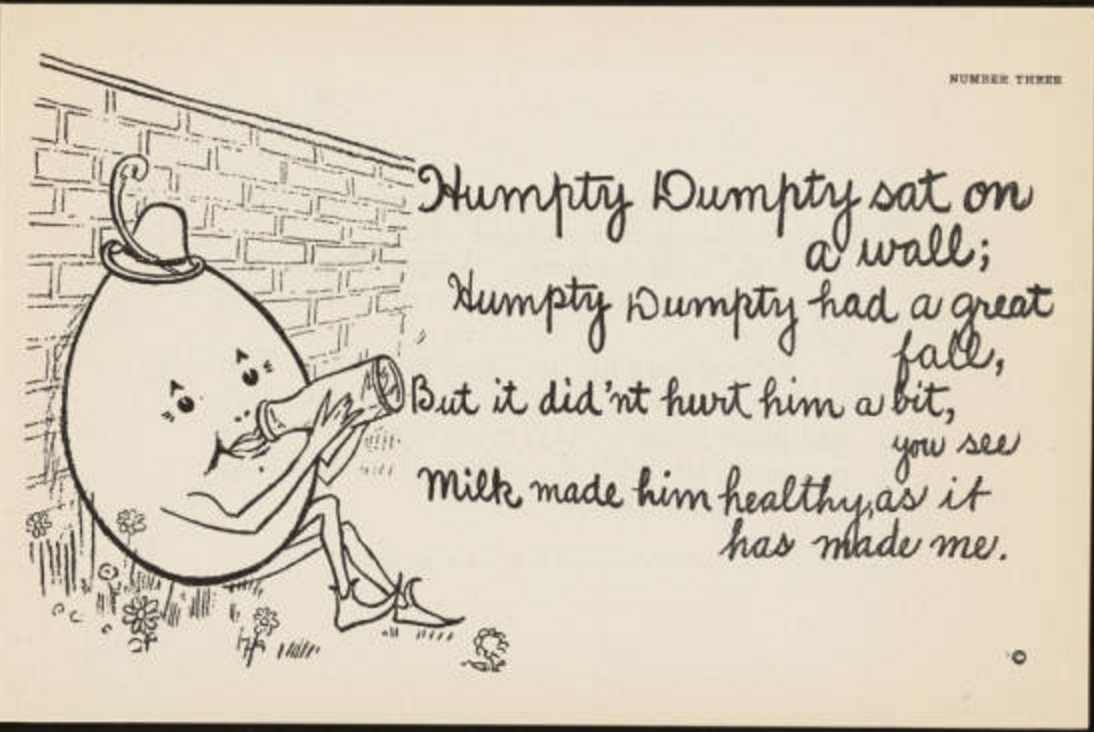 During World War II, the NDC redoubled its advertising efforts, this time aligning its mission with the American identity. One red, white and blue clad poster states, “Toughen up! You have a war to win. Drink Enough milk!” while another image, this time of Uncle Sam’s wrist and hand (index and middle finger shaped into a V) reads, “Victory demands healthy Americans. Eat more dairy foods.” Similarly, a series of posters from 1941 with a shirtless man performing manual labor states, “America needs Muscle. Drink milk.” and, “America needs Power. Drink milk.”

Ultimately, the consumption of milk becomes part of a nationalizing effort on the part of the dairy industry. Even the act of naming the ability to digest lactose is political: in the West, lactose intolerance suggests a diversion from the norm; it suggests a stubbornness and ornery lack of acceptance for dairy products. The phrase isn’t entirely accurate, either, and some scientific bodies have suggested a move towards “lactose resistant,” “nonabsorbent,” or even “lactase nonpersistent,” but none of these phrases have rivaled the entrenchment of the term “intolerance.”

Collectively, the NDC and USDA have worked together to instill an understanding of milk as an essential (and unique) source of calcium and protein, and as such, claims that milk is the “foundation for a Strong America!” Despite decades of research suggesting that the calcium in milk is actually a product of dairy cows’ grain-based diet—and that our guts don’t absorb the most of the calcium in pasteurized milk in the first place—the myth of milk carries on.

The importance of milk was further engrained through the 1946 National School Lunch Act under President Truman, sponsored by the USDA. The National School Lunch Program (NSLP), which standardized local penny milk efforts in Chicago and other urban centers in the early 1940s, provided low-cost lunches that met USDA food guidelines and simultaneously increased demand at the heels of the mid-century’s national milk surplus. Meeting the USDA’s twin goals of “expanding markets for agricultural products” and “improving nutrition and health by providing…nutrition education and promotion,” the NSLP essentialized milk as a core tenant of children’s meals. 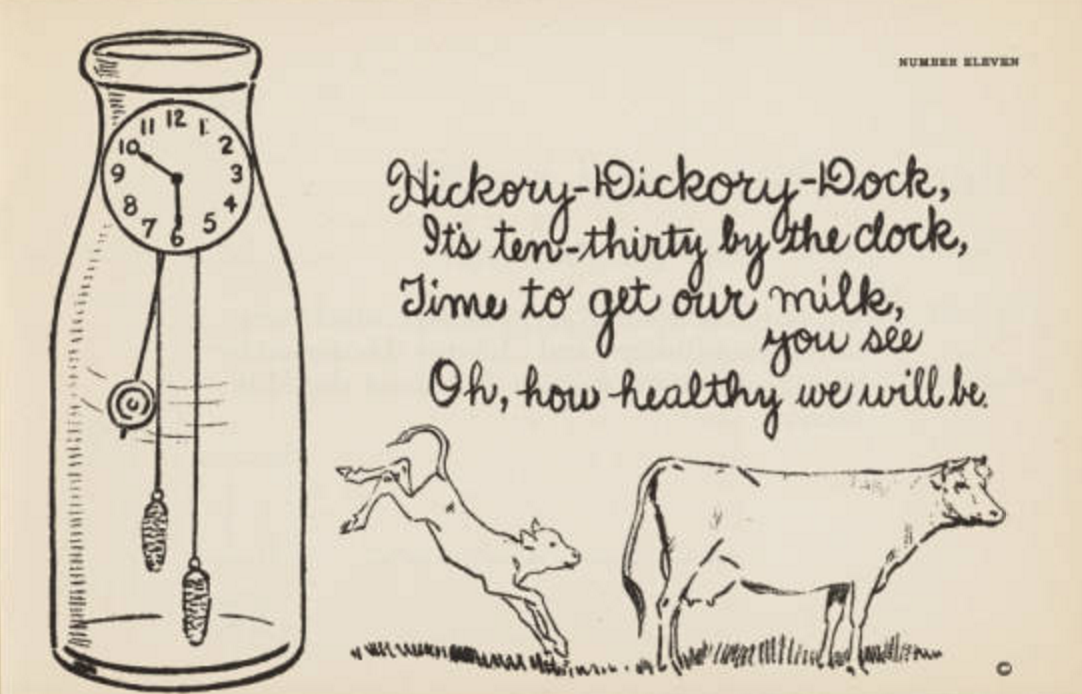 In 2012, more than 30 million public school children received daily free lunches through the NSLP, and of that, 70 percent were racial minorities. NSLP-participating schools require students to take a carton of milk in accordance with the program, and only students with a physician’s note for a milk allergy are allowed to substitute for soy milk (at a higher cost to the schools), privileging the well-being of children with access to non-emergency medical care in the process. Through a national mandate that effectively demands that all public school children at 130 percent above the poverty line or below take a carton of milk with their lunch, the USDA disproportionately requires historically lactose intolerant bodies to consume fresh dairy milk on a daily basis. The NSLP lunches also instill a habit of dairy consumption among populations significantly impacted by heart disease, obesity and hypertension, which milk has also been associated with.

Despite the fact that the majority of the world population is lactose intolerant, the condition is still pathologized and considered a dietary restriction, especially within the Western world. I wasn’t necessarily surprised when my doctor told me I was probably lactose intolerant—the stomach pains I had been feeling after every meal for months had gotten ridiculous, and my older brother has never let me forget my gaseous past—but still, each time I reach for a Lactaid pill before grabbing a bowl of cereal, I can’t help but think I’m letting the dairy industry and its daily calcium recommendation (laced as milk advertisement) win.

DOLMA OMBADYKOW B’17 is resistant.