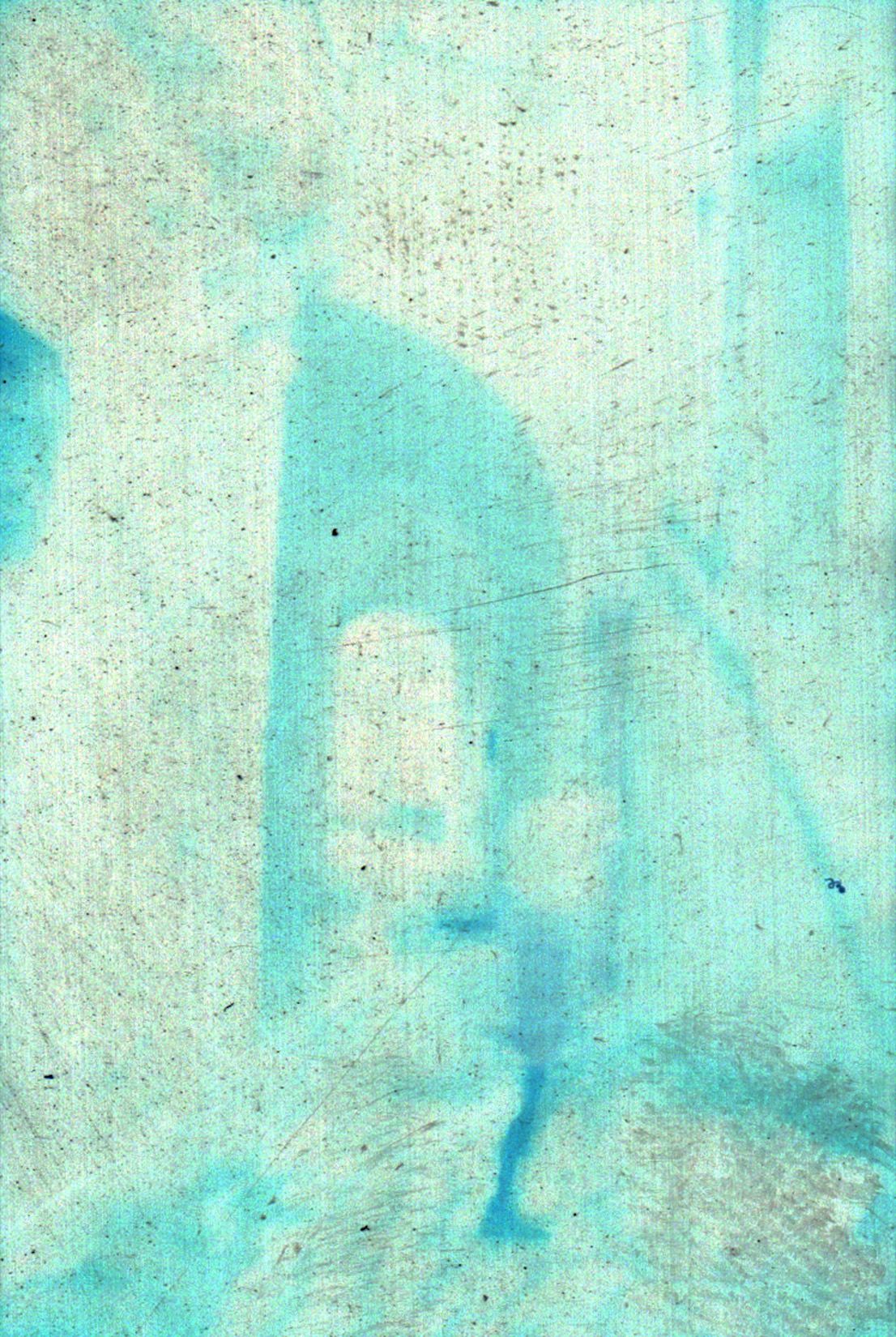 “This which yields or fills / All space, the ambient air wide interfus’d”

The term  ‘ambient media’ seems to have been first used in the late sixteenth and early seventeenth centuries, at least in writing. The scientific literature of the Early Modern period in Europe picked up ‘ambient’ from the Greek αμφι, ‘around,’ which in Latin, French, English, and related languages merged with ire (‘to go’), inventing an enigmatic sense of movement. Ambio; ambiens; ambiance; ambient. Going around, encircling, circulating.

At the time, the primary ambient medium in question wasn’t sound, image, or text, music or advertising or signage, but aether. Particularly in the debates surrounding the possibility or impossibility of a vacuum, physicists, philosophers, and theologians conceived of aether as an indifferent and possibly immaterial—though this point was controversial—element filling and flowing throughout the entirety of space, below the threshold of perception. Robert Fludd, borrowing from the Greek philosopher Plotinus, believed, as he wrote in 1659, that aether, or “the Etheriall sperm, or Astralicall, are of a far subtler condition, than is the vehicle of visible light…they are so thin, so mobile, so penetrating, and so lively, that they are able, and also do continually penetrate, and that without any manifest obstacle or resistance.”

Such instances of ambient media abound in contemporaneous speculations and experiments, mostly those dealing with fluids, gases, light, and so on. A section of Newton’s Optics, for instance, is devoted to the theorization of the “ambient Medium” through which colors and their rays pass. Newton’s “ambient Medium” is simply whatever “pervades the Interstices” of bodies. “The thickness of a Plate requisite to produce any Colour, depends only on the density of the plate, and not on that of the ambient Medium.” A dialogue in Galileo’s Discourses and Mathematical Demonstrations Relating to Two New Sciences, in its earliest English translation, imagines what it would mean for one air to be enclosed or immersed within another air. “And I know not how to discern any Difference between the two Constitutions of the Inclosed and Ambient, because in this the Ambient does no-ways press the Inclosed, and in that the Inclosed doth not in the least oppose the Ambient.”

The Muzak company began in 1922 as Wired Radio. Founded by a U.S. Signal Corps officer named General Owen Squier, Wired Radio was a service that ‘piped’ music to paid subscribers using multiplexing—a brand new method at the time. Wired competed with the nascent radio industry and eventually retreated to focus on corporate customers, who began installing the company’s systems in their workplaces and stores. Wired was renamed Muzak in 1934 (following the model of the Kodak name), and developed a number of pseudo-scientific methods including its “Stimulus Progression,” whose tempo-modulating, 15-minute blocks of soundtracks and silences were intended to regulate worker activity and maximize productivity. From 1940 to around 1970, Muzak was ubiquitous in American architectures of consumption, production, leisure, and hospitality. A soundtrack of late capitalism.

Muzak was the direct impetus for Brian Eno’s conception of “Ambient Music.” Whereas Muzak dissolved difference, regularizing environments and controlling flows, Eno wanted a different kind of ambience that would instead “tint” and “enhance” irregularities and disjunctions. His 1978 Music for Airports / Ambient 1 is, in his own words, “intended to induce calm and a space to think.” Its primary function is “to accommodate many levels of listening attention without enforcing one in particular; it must be as ignorable as it is interesting.”

Beyond Eno and Muzak, ambience—or something like it—has a long and variegated history in modern music, from Erik Satie’s 19th and early 20th-century "furniture music," to John Cage's Zen-inflected musings on silence and contingency, to La Monte Young’s extended minimalism and drone music. And, more recently, there are R. Murray Schafer's environmentalist "soundscapes," Pauline Oliveros' "deep listening” practices, a plethora of New Age relaxation, easy listening, and mood musics, the avant-garde field recordings of sound artists like Francisco Lopez, Luc Ferrari, and Chris Watson, the new music compositions of people like Michael Pisaro and the Wandelweiser group—not to mention the various microgenres of late 20th and 21st-century ambient pop music (dub, chillout, downtempo, vaporwave). These forms of sounding and listening, all involving ambience in some way, are often mutually contradictory: some will embrace difficulty and displeasure, others attend to sonic materiality, still others intoxicate and narcotize, or adorn and decorate. But Eno’s music remains prototypical and useful because it foregrounds ambience’s principal problems: its apparent lack of interest in the political, its exhausted, boring, or narcoleptic composition, its indistinguishability from mood music and meditation aids. And it simultaneously presents critical possibilities, through what might be called ironic mimicry or false complicity. Eno represents ambient poetics’ Janus-face—his music silences the social and “induces calm,” yet at the same time redistributes receptivity and contests selectivity.

On some level, the ambient has always been a poetic concept, even in its Early Modern scientific, philosophical, and theological manifestations. The subtlety of aether, the softness of light, the lightness of air: all effectively “background noise” for the human sensorium, background noise to be listened to and rendered in a writing for which there was, or is, no language and no concepts. Ambience is like affect or atmosphere—it precedes the linguistic-conceptual, which has to (de)form itself and (re)invent itself in poetry (or science). Ambience, in other words, is the murmur that suffuses every conversation, a hushed voice that speaks alongside the others. Its yields, or it fills, or it does both at once, withdrawing as it becomes what it is.

The English Romantic scholar Timothy Morton has put forth an idea of “ambient poetics,” which he sees substantiated in various kinds of poetry, from Wordsworth and Coleridge to “Twinkle, Twinkle, Little Star.” Ambient poetics, simply, points out the medium or environment in which communication and activity take place. It elaborates on the hum of a room, the touch of a breeze, the glow of a street. It’s incredibly banal. And yet for Morton, ambient poetics also addresses a fundamental crisis—namely, ecological crisis, the crisis of the so-called Anthropocene (or Capitalocene). Ambience, when one begins to look at it more closely, is almost always ecological, referring to lawns, parking lots, airwaves, urban infrastructures, airport concourses, even nuclear radiation or global warming itself. “Ambience,” as Morton defines it in a 2002 essay called “Why Ambient Poetics?” “is a poetic enactment of a state of nondual awareness that collapses the subject-object division, upon which depends the aggressive territorialization that precipitates ecological destruction.”

According to Morton, it’s by writing ambience and reading for ambience that we might move toward what he calls a “depthless ecology.” Not a “deep ecology” invested in cultural guilt, natural purity, and individual responsibility, but a surface (or a bottomless) ecology that perhaps integrates, following theorists Felix Guattari and Gregory Bateson, the pre-individual ecologies of the psychical, the social, and the environmental. This is to say that ambience doesn’t necessarily have anything to do with “the great outdoors,” per se, an outside or primordial Nature untouched by its opposite, Culture. Ambience is simply the ambience of the spaces we are already inhabiting—on the one hand, the intimate spaces of dwelling, and on the other, the most inhuman or alien of spaces, even those spaces that are intolerable. And this is its politics, in the abstract: to imagine what spaces we might (not) inhabit, or might inhabit otherwise.

It could be a matter of ekphrasis, of merely imitating music—translation of one medium to another—but this would subordinate literature to auditory sensation, and ambience is clearly about more than audio. There is visual ambience, haptic ambience, olfactory ambience, perhaps even non-sensory ambience. The American poet Tan Lin has made these multimedia, multisensory, or nonsensory potentialities his starting point. Lin is one of the most interesting writers working in ambient literature, a field for which Lin has also used the names “ambient writing” and “ambient stylistics.” His 2007 book, Seven Controlled Vocabularies and Obituary 2004. The Joy of Cooking, would be something of a manifesto if it weren’t so diffuse and boring. The book’s first section, “A Field Guide to American Painting,” begins with a brief piece called “5:27 35º,” whose distracted, almost machine-like flow is characteristic of Lin’s writing:

What are the forms of non-reading and what are the non-forms a reading might take? Poetry = wallpaper. Novel = design object. Text as ambient soundtrack? Dew-champ wanted to create works of art that were non-retinal. It would be nice to create works of literature that didn’t have to be read but could be looked at, like placemats. The most exasperating thing at a poetry reading is always the sound of a poet reading.

This paragraph, which repeats itself throughout the book in variations and permutations, contains the main thematics of Lin’s intentionally anodyne and pseudo-computational writing. The topics are buildings and food, landscapes and containment, painting and film, pharmaceuticals and the architecture of the book. There is writing on cookbooks, airports, television, Wal-Mart, barcodes, and fluorescent open weather low service structures ("Fowls"). Lin’s writing induces and transduces a number of resonances among these various media and materials in a strange kind of (non-)ekphrasis that refuses to observe and de-scribe objects, artifacts or monuments, but which instead attempts to both translate and annotate a whole field of contemporary consumer atmospherics.

Lin’s approach, similar but divergent from Eno’s and Morton’s, is to immerse writing in the coercive, soothing, and seamless ambience of culture under neoliberalism. It rarely ironizes plain and simple; instead, like the best critical art practices, it leaves its own complicity as an open question, and politicizes habitation. Its stated task: to analyze the “spaces we might not have inhabited had we lived less [coercive lives], eaten more organic vegetables or taken Xanax at night before retiring.” Continuing, in one of his most potent statements, Lin writes:

The [words] like the buildings of our era are utterly indiscriminate and by indiscriminate I mean already forgotten. Like us they have been reflected back to us by other more efficient modes of relaxation such as the shopping mall, the television, abandoned lots, landscapes that have been photographed, interactive e-billboards, backs of books, the disco, electronic signatures, and fast food.

And, ambivalently: “All labeling schemes shall be as non-descriptive as possible.”

ALEC MAPES-FRANCES B'17 is ignorable, or, interesting.