A Gift of God 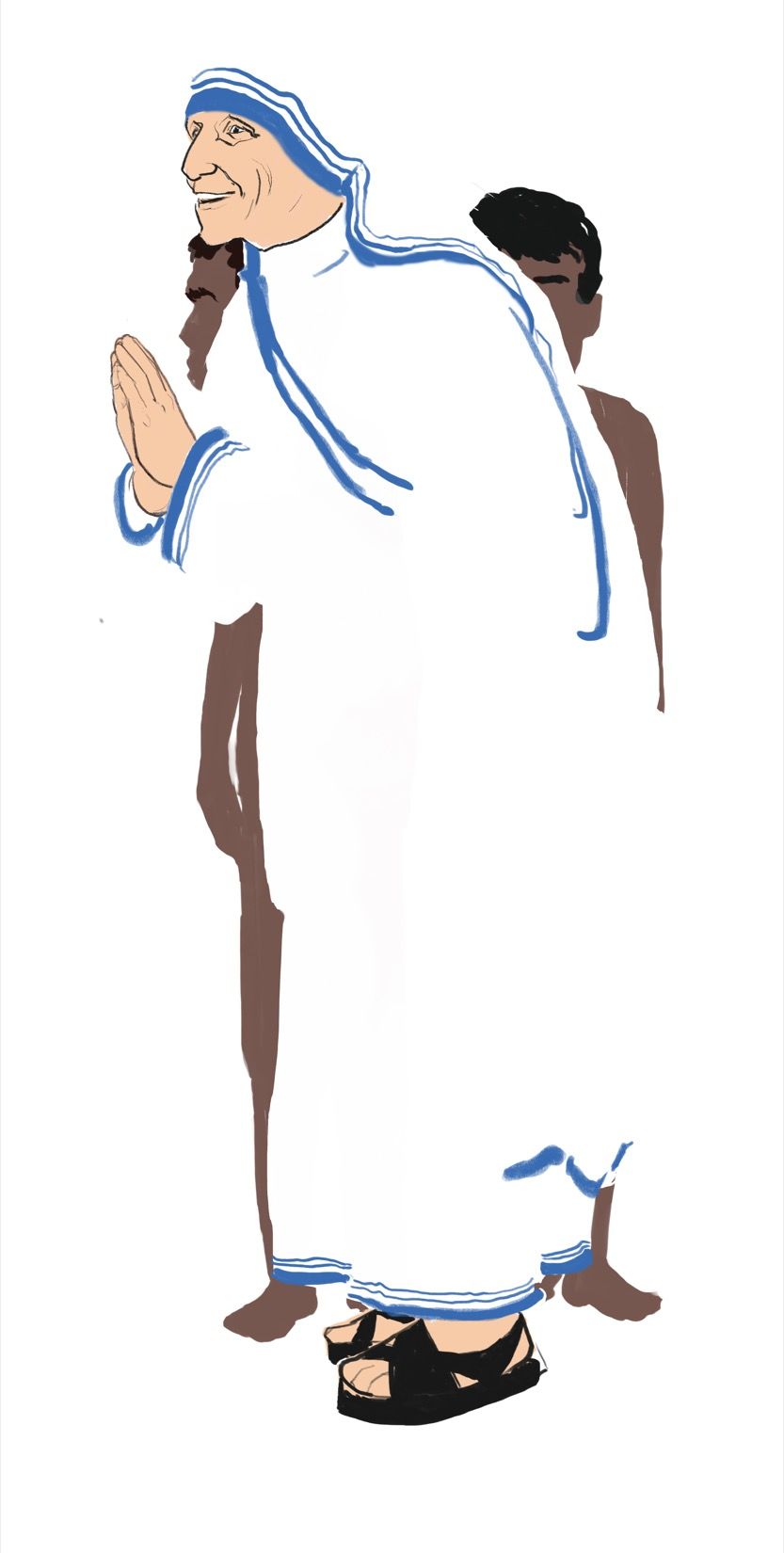 In December, Pope Francis approved a second miracle attributed to the Albanian-born nun Mother Teresa. A Brazilian man claimed that in 2008 his brain tumor had been cured by her intercession. The Pope’s acceptance of the cure as a miracle paves the way for Mother Teresa’s canonization, which is expected to take place in September of this year. The process for Mother Teresa to become a saint has been unusually expedited—her beatification took place a year after her death in 1997. Beatification, a ceremony in which the Pope acknowledges that a dead person can intercede on behalf of those who pray in their name, is the first step in the process of becoming a saint, and generally must take place after a minimum five-year waiting period after the person’s death. According to a study published by Harvard University, the average time between a saint’s death and canonization since the year 1588 has been 181 years. That Mother Teresa will be canonized within 20 years of her death is a testament to how celebrated she was in her lifetime, and continues to be today.

To many in the church, Mother Teresa was always destined for canonization. Known as the “Saint of the Gutters,” Mother Teresa founded the Missionaries of Charity in Kolkata, India in 1950. To this day, her congregation runs soup kitchens, orphanages, hospices for the terminally ill, and schools in over 100 countries. Mother Teresa’s reputation extends outside of the Catholic Church as well. Throughout her lifetime, she was praised by numerous world leaders, and in 1979 she received the Nobel Peace Prize for her selfless work in helping the world’s poorest people—the Poorest of the Poor, as she called them, capitalized as one would capitalize God.

From childhood, Mother Teresa, born Anjezë Gonxhe Bojaxhiu, had known she wanted to be a nun, and was particularly inspired by missionaries in Bengal. At the age of 18, she left her home in Skopje in modern-day Macedonia to join the Sisters of Loreto in Ireland, where she learned English. After a year she left for Bengal, teaching at a school in Darjeeling as she underwent training with the Sisters of Loreto. She took her religious vows in 1931, and took on the name Teresa, from Thérèse de Lisieux, the patron saint of missionaries. She taught at the Loreto school in Kolkata, and would go on to become headmistress. In 1946, after 18 years with the Sisters of Loreto, Mother Teresa suddenly experienced a calling from God to “help the poor while living among them.” She left her convent, learned basic medical training, and began her missionary work in Kolkata, slowly gaining a following of fellow nuns. Early on, without the security and comfort of a convent, she herself often resorted to begging for food.

Perhaps it would be more shocking if such a figure went unrecognized. Mother Teresa dedicated nearly 50 years of her life to a charity that spread across the world. The fact that her service was religiously inspired serves only to bolster her status as a hero in the public imagination. In his speech presenting Mother Teresa with her Nobel Prize, the Nobel Committee Chairman Josh Sanness said of her work, “The loneliest and the most wretched, the dying destitute, the abandoned lepers, have been received by her and her Sisters with warm compassion devoid of condescension, based on this reverence for Christ in Man.” Yet her legacy was far from perfect, and many of its flaws originated in the religious nature of her work. Though her canonization only officially matters within the Church, it will also solidify a narrative in the secular public imagination that ignores the harmful aspects of her work.

Though claiming to be without political views, in her Nobel lecture, Mother Teresa framed her charity’s adoption work as part of the fight against abortion, which she called “the greatest destroyer of peace” and “a direct war,  a direct killing—direct murder by the mother herself.” Just last October, the Missionaries of Charity announced it would shut down adoption services in 30 orphanages in India, after the Indian government’s overhaul of the country’s outdated adoption system. New laws introduced during the overhaul would require the orphanages to allow adoptions to hopeful parents who are divorced or single, which runs counter to the mission's philosophy. Mother Teresa also publicly decried the use of contraception throughout her career, and in the 1990s she campaigned against an Irish referendum to end the country’s decades-long ban on divorce. In this regard, Mother Teresa and her order represent a hardline Catholicism that often seeks to enshrine itself in the law.

Also in spite of her supposedly apolitical ethos, she maintained ties to a number of unsavory world leaders, including repressive dictators Jean-Claude Duvalier of Haiti and Enver Hoxha of Albania. In fact, Mother Teresa accepted money from Duvalier, who made millions of dollars off the illegal drug and organ trade while his country remained impoverished, and had dissidents killed and tortured under his brutal regime.

In 1985, Mother Teresa accepted the Medal of Freedom from Ronald Reagan, who provided arms to anti-communist militaries in Central America and fanned the flames of violent conflict. Mother Teresa had little to say about the US-backed political violence in the region. On a visit to Guatemala she remarked, “Everything was peaceful in the parts we’d visited.” At the same time in Latin America, many clergy were proponents of Liberation Theology, a movement that forth the idea that poverty was the result of systematic sin—often perpetrated by the powerful leaders Mother Teresa praised. In his 1994 documentary “Mother Teresa: Hell’s Angel,” the writer Christopher Hitchens, a vocal critic of organized religion, condemned these ties: “She may or may not comfort the afflicted, but she has certainly never been known to afflict the comfortable.”

Whether Mother Teresa and her followers truly comforted the afflicted is also questionable. In a 1991 article for medical journal The Lancet, its editor Robin Fox described his visit to her Home for Dying Destitutes in Kolkata. Fox witnessed nuns and volunteers reusing needles between patients, and a lack of doctors and medication, in spite of the millions of dollars in donations that the Missionaries of Charity received. In 2005, journalist Donal MacIntyre visited the Missionaries’ Daya Dan orphanage in Kolkata. In the New Statesman, MacIntyre described volunteers “drunk on their own philanthropy” and unconcerned with the inhumane conditions around them. “I saw children with their mouths gagged open to be given medicine, their hands flaying [sic] in distress, visible testimony to the pain they were in. Tiny babies were bound with cloths at feeding time. Rough hands wrenched heads into position for feeding. Some of the children retched and coughed as rushed staff crammed food into their mouths,” MacIntyre wrote. That such treatment was routine and accepted by staff is alarming, and indicative of a widespread problem with the orphanage’s culture—and perhaps even the larger culture of Mother Teresa’s order. Though such abuse doesn’t exist in every facility run by the Missionaries of Charity, much of the work done by the order was of dubious merit. In “Mother Teresa: The Final Verdict,” Indian-born physician Aroup Chatterjee wrote that a number of the Missionaries’ facilities simply existed to convert the local population to Christianity. In fact, eight of the Missionaries’ homes in Papua New Guinea didn’t have residents at all, and simply engaged in conversion work.

Mother Teresa’s philosophy suggests that her charities were never intended to provide as much assistance as possible to the populations they served. At a 1981 press conference, she said "I think it is very beautiful for the poor to accept their lot, to share it with the passion of Christ. I think the world is being much helped by the suffering of the poor people." In his 2002 essay “Mother Teresa as the Mirror of Bourgeois Guilt,” historian and Kolkata native Vijay Prashad wrote that Mother Teresa and Princess Diana both “provided easy symbols of charity rather than social change as they promoted forms of altruism well suited to privatized social action rather than to substantial social change.” That is to say, what Mother Teresa did is less important than how she made her admirers feel. Ending poverty and disease was not Mother Teresa’s goal. In fact, poverty and disease were unavoidable in her view. Her work did, however, play into “the colonial notion that white peoples are somehow especially endowed with the capacity to create social change,” according to Prashad. At the heart of Mother Teresa’s appeal is a relief of white and western guilt. Deeply enshrined in her philosophy is the idea that the suffering of others makes us better people. At an event for the release of one her biographies in 1988, Mother Teresa said “Leprosy is not a punishment, it can be a very beautiful gift of God if we make good use of it. Through it we can learn to love the unloved.” Writing in The New York Review of Books in 1996, Murray Kempton responded, “Such is the spirit that breathes so incessantly as to make loud the undertones of an insistence that the poor have been placed among us for the primary purpose of affording the comfortable a chance to discover how virtuous they are.” Mother Teresa's elevation to the status of a saint, both religiously and culturally, means elevating a symbol of charity more than it means elevating charity itself.

The soon-to-be newest saint in the Catholic Church was not a champion of the poor, but a champion of the powerful. That her work in the Missionaries of Charity has been flipped into a hegemonic narrative of selflessness and service erases the many who only continued to suffer under her watch, and the watch of a world more willing to embrace its own generosity than examine its demons. Her canonization is practically a formality at this point: her life’s work has long been sanctified inside and outside of the church. To some, Mother Teresa was the Saint of the Gutters. To many more who will never get to voice their own narrative, she was the saint of the empty gesture.

JANE ARGODALE B’18 can be a very beautiful gift of God if we make use of her.