Education as Commodity in Hong Kong 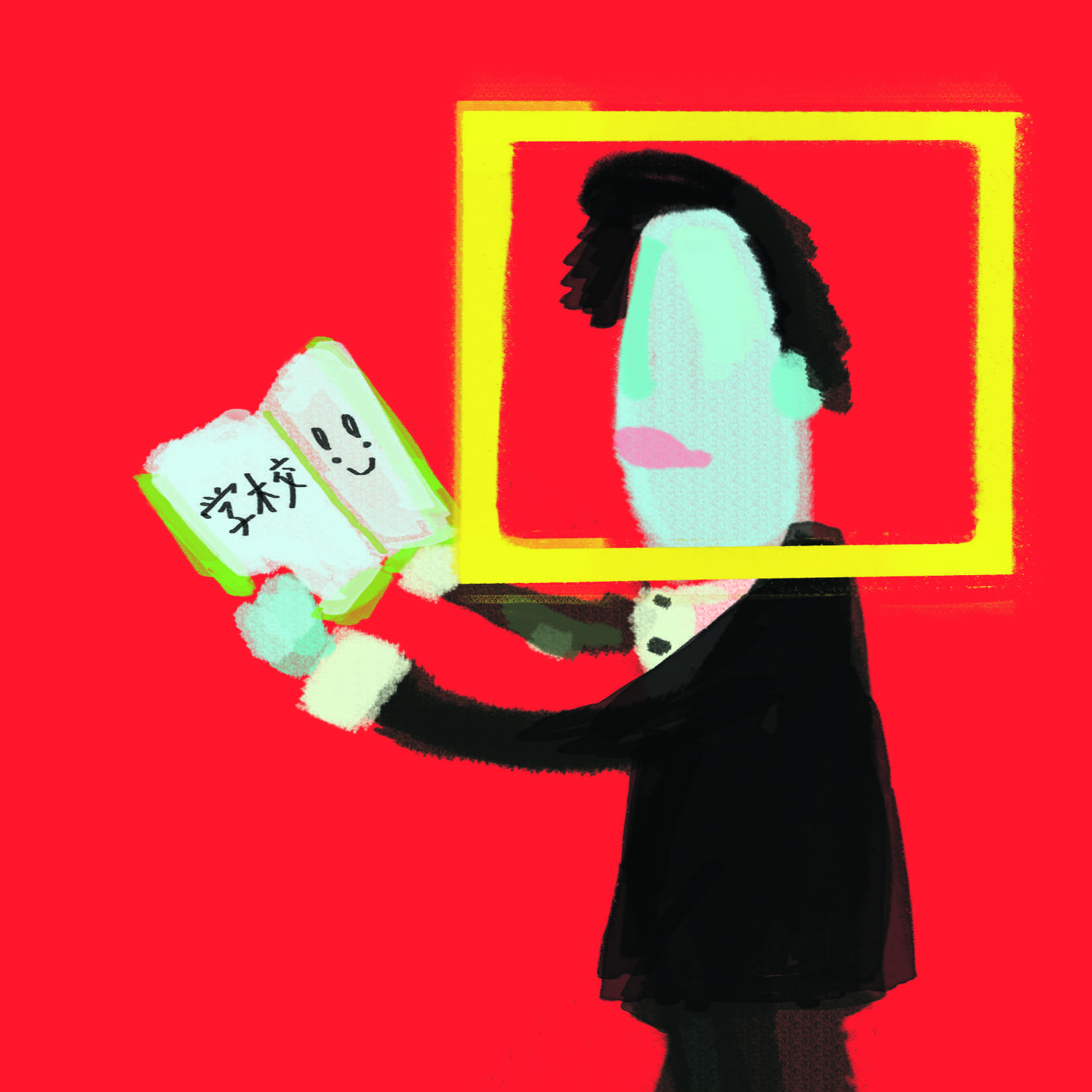 On a Saturday evening in February, dozens of teenagers line up outside translucent glass doors. Some chatter with their neighbors. Others stare at their phones. Still more are anxiously tapping their feet, shifting their weight from one foot to the other.

The teenagers take a seat, and take out meticulously organized papers. The television at the front of the room blinks on, and a figure begins speaking down to them from the screen. They fall silent and stare, wide-eyed, entranced by the fluid, enchanting speech issuing forth from the figure. For the next hour and a half, these teenagers scribble on their papers silently, furiously, as though trying to capture every syllable.

The man on the screen looks like a 30-year-old pop star. His hair is jet-black and streaked with copper highlights; his skin is flawless; his speech is casual and intelligent, peppered with pop culture references, adolescent slang, and witty remarks. A man that parents and children whisper about—they know about his yellow Lamborghini, which has his name emblazoned on the license plate, and his love for Louis Vuitton.

The man on the screen is Richard Eng, the 50-year-old founder of Beacon College, one of the first tutoring centers in Hong Kong. Since 1996, he has been teaching English to the thousands of secondary school students who have flocked to his classes—which, somewhat incongruously, are taught almost entirely in Cantonese. His classes are so popular that only a handful of students are able to access live instruction due to safety regulations and spatial constraints. The rest must settle for a live-stream in another room, or else watch replays of the lectures on their own time.

Welcome to the world of Hong Kong’s shadow education, ruled by tutor kings and queens who boast student lists thousands of names long. Their faces peer down at you from billboards, then from the side of a bus, and again from the walls of a subway station. They all have the same flawless skin and shiny black hair. Their gaze is captivating and seductive; they smile like they know something you don’t.

Almost all of them work for tutoring centers dotted throughout the city, which open their doors each evening to accommodate 80 percent of Hong Kong’s secondary school students. These tutoring centers are the drivers of the system of supplementary tutoring in Hong Kong, an industry that pulls in over $260 million USD per year.

The financial and social rewards reaped by tutors in the industry are prodigious: the average tutor earns double the salary of a regular schoolteacher, and the most famous celebrity tutors are multimillionaires. Tony Chow, a 30-year-old English tutor at Modern Education (one of the largest tutorial centers in Hong Kong), charges up to $75 for four hour-long classes a month—which, when multiplied by a student list thousands of names long, translates to big money. Y.Y. Lam, a tutor at Beacon College who teaches Chinese literature classes to over ten thousand students, was offered nearly $11 million in 2013 when Modern Education attempted to poach him and his clients from Beacon College. (He humbly decided, however, that the $4.6 million he was earning at the time was enough, and turned down the offer.)

These tutors amass not only fortune, but also fame: many have cult-like followings comprised of students and parents alike. Y.Y. Lam has one of the most recognizable faces in Hong Kong, and he is often inundated by teenaged fans when he emerges in public. Alan Chan, a tutor with King’s Glory Education (another renowned tutorial center), is known for his magnetism and charisma, and for his ability to captivate and inspire students in lectures. His students treat him with attention and adoration: they give him collages and frosted cupcakes on his birthday, and often ask to have a picture with him at the end of tutoring sessions. These tutors are gushed about, admired, and worshipped; they are the students’ idols and saviors.

But saviors from what? It would seem unlikely that Hong Kong’s teenagers, who demonstrate incredible academic prowess, would need much help. The educational system in Hong Kong is lauded as one of the best in the world, with its students consistently outperforming their Western counterparts and putting up scores that are neck-and-neck with those of their East Asian peers. In a 2012 report published by the Organization for Economic Cooperation and Development (OECD), the scores of Hong Kong’s students topped the charts in all three learning domains: mathematics, reading, and science. In a 2015 report—this time, the largest-ever global educational ranking report—Hong Kong came second, trailing closely behind Singapore.

Students in Hong Kong grow up with exams, all in preparation for the grand finale that will determine their future career and life prospects. The secondary education of Hong Kong’s students concludes with a college entrance examination administered by the Hong Kong Examinations and Assessments Authority. A student’s score on the final exam determines not just where the student will go to university, but whether or not that student will be able to secure a place at a university in Hong Kong at all. Since 1994, the number of publicly funded university spaces has been capped at 15,000 students, which means that only 18 percent of the city’s students are able to study at a government-funded institution.

For wealthier students, this can be nothing more than a slight setback: however they fare on the exams, they can look abroad for more options, with many choosing to go to Australia, Canada, or the United Kingdom. But for the less well-off, poor test scores can mean the end of their dreams for the future. As Y.Y. Lam put it: “This exam determines the student’s entire career. One mistake can mean a life sentence; it can mean that his entire life is spent in poverty.”

The future of the student thus hangs on a thread; she has little control of her fate. With so much at stake, it is perhaps only natural that she should turn to a higher power that can help her out of her predicament—a higher power that, in this case, presents itself as a young, charming tutor with perfectly tousled hair, dressed head to toe in designer clothing.

Given the cutthroat competition between teenagers to secure a place in university, as well as the clear divide between the winners and the losers in the system, it is unsurprising that tutorial centers have proliferated in Hong Kong over the past two decades. A study conducted in August 2015 (before the start of the school year) revealed that 25 percent of students had extremely high levels of stress, with 30 percent saying that they thought they were “going to go crazy”. Another recent survey interviewed nearly ten thousand secondary school students in Hong Kong, and discovered that 24 percent of them have had suicidal thoughts; 51 percent of respondents also showed signs of mild to major depression. The students’ fear of failure and poverty has thus transformed into desperation and helplessness. They will do whatever they can to ensure that, in a year or two, this fear and psychological turmoil will be but a distant memory.

The tutors are all too aware of this fear, and they capitalize on it. In the market-driven society that is Hong Kong, education has been commodified, and knowledge is nothing more than hints, tips, tricks, and shortcuts for the exam. Going to school is no longer enough; to keep up with the university-bound tide, private tutoring sessions are now essential. Tutoring centers have shifted the bell curve and raised the educational baseline; the tutors have created the necessity for their own existence. Tutoring is the latest installment in a veritable educational arms race. But the resulting structure is inherently biased, marginalizing those who can’t afford tutoring services, hindering their chances at university admission (and thus at well-paying work), such that they are less likely to pay for the tutoring of their own children. Meanwhile, the children of the wealthy are helped on the way to replicating their parents’ success. Inequality is perpetuated, and social mobility stifled. The big winners in this cycle are the tutors themselves, and the handful of top-scoring students who get their names published in the paper when results come out. One graduating class goes off to college; the rest are forgotten.

It is yet another Saturday night, perhaps one, two, maybe five years later. Dozens of teenagers can be seen lining up outside the translucent glass doors of Beacon College. They all dress and look more or less the same, with neat, plain black hair, awkwardly oversized school uniforms, and bags under their eyes. There is an anxious murmuring; a frenzied stillness pervades the air.

The doors open. A clean-cut, bright-eyed, picture-perfect tutor welcomes in the students with a warm, reassuring smile and kind voice.

The tension in the air dissipates, if only for a moment. The students smile shyly and respectfully when they greet the tutor. They take out meticulously organized papers. The tutor strides to the front of the room. She begins to speak.

The students fall silent in reverence and relief.

Where there is fear, there is often also idol worship. The gods of destiny in the Fragrant Harbor return year after year in their humble outfit of test scrolls detailed with multiple-choice bubbles and lined pages. Well-intentioned parents, wanting only the best for their children, give whatever they can to protect them from the threat of future misery and poverty; the students, trembling with fear and uncertainty in their dull, unpolished dress shoes, turn again and again to their earthly idols and guardian angels. And Y.Y. Lam, Richard Eng, and Alan Chan—along with all those other glamorous saviors clothed in Louis Vuitton and Chanel—will be ready, as always, to welcome them into their arms.