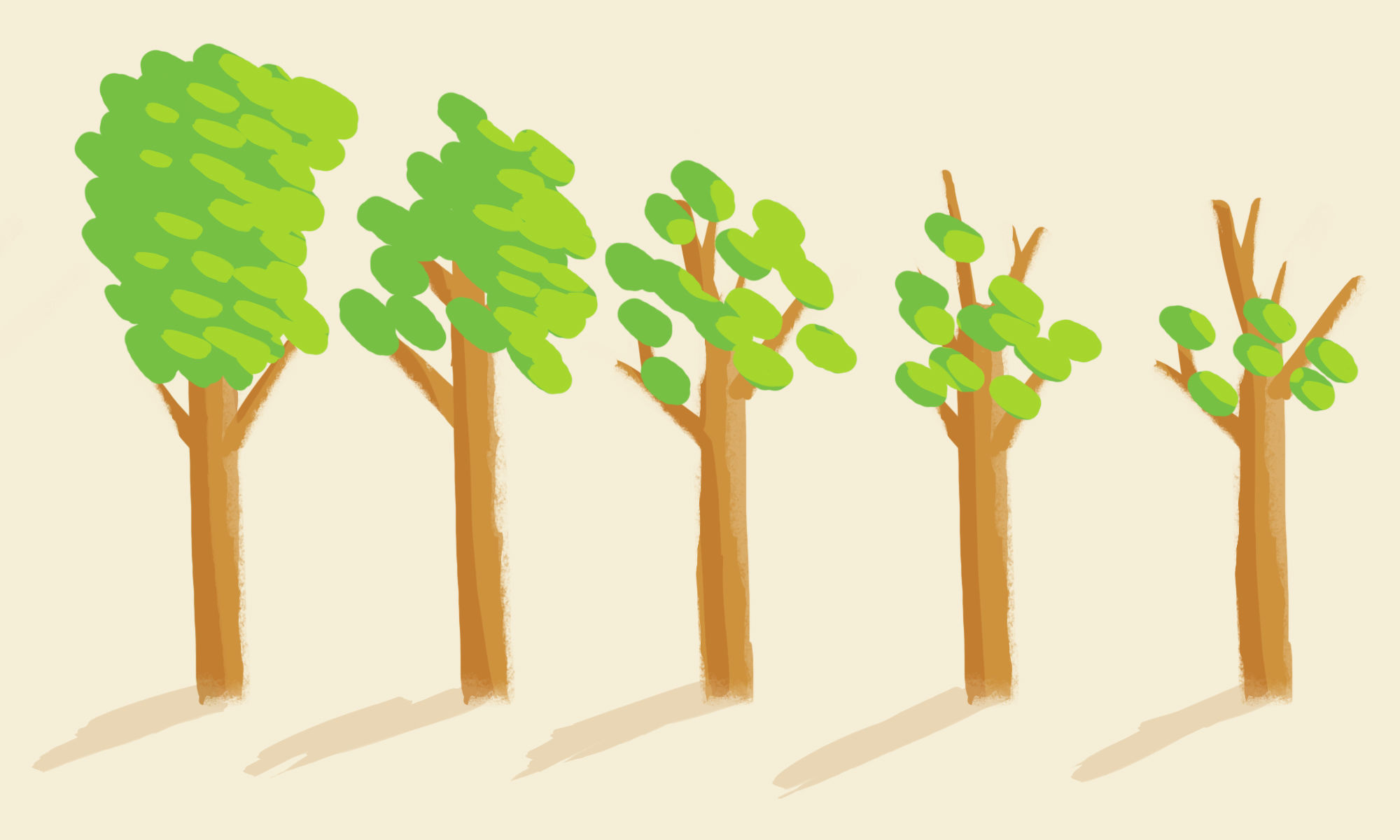 In September 2007, the Providence Parks Department contracted a private company to fly a satellite over the city. The satellite photographed every square foot of the city and sent it to a team at NCDC Imaging, who sorted the pixels into four discrete categories: impervious surface, water, grass, and tree canopy. A 2008 report called the “State of Providence’s Urban Forest” reported that 23 percent of Providence is covered by tree canopy. For reference, other cities that have employed the Urban Tree Canopy methodology (UTC) include Boston (29 percent), Baltimore (20 percent), New York City (24 percent), and Pittsburgh (38 percent).

Doug Still, Providence’s City Forester, says that the Department has set a goal of reaching 30 percent UTC citywide, though they have yet to set a project deadline. The arguments for increasing Providence’s tree canopy rest on the numerous public health benefits that urban forests provide for their cities. To name a few, higher UTC corresponds with improved air quality, lower urban temperatures, and less stormwater runoff. Still says that trees also provide numerous psychological benefits that are more difficult to define explicitly. “It’s that intangible factor that just makes things more pleasant,” says Still. “If you see a street that’s tree-lined, and then the next street over has similar buildings and infrastructure but no trees, there’s a huge difference.”

An inventory of every tree in Providence, including each tree’s location, species, diameter, and health, was also completed for the “State of Providence’s Urban Forest” report. Tallied on foot by the Parks Department and a team of 100 trained volunteers, Providence’s trees totaled at 24,499 as of May 2006. The inventory is still the working database for the Parks Department’s Forestry Division, who updates it every time they plant a tree.

The report brought two important facts to the Parks Department’s attention. The first was that Providence is slowly recovering from a massive loss of trees sustained over the last half-century. A 1901 inventory measured an urban forest with upwards of 50,000 trees. Following decades of industrialization, urban growth, and outbreaks of Dutch Elm Disease, Providence’s tree count fell to 16,500 by the mid-1970s, according to estimates by the City Forester from that era.

The 2008 report indicates that recent planting efforts have indeed increased tree counts. The trees that Still’s office plants are selected to make up a more resilient urban forest. Following the decimation wrought by Dutch Elm Disease in the 1950s and ‘60s, City Forestry again overlooked the importance of biodiversity and replanted roughly half of the city’s stock with an invasive species called the Norway Maple. Still’s office currently replaces Norway Maples with a rotating cast of less invasive trees whenever possible. The newfound emphasis on resilience is necessary with a host of dangerous tree pests lurking on the horizon: the emerald ash borer has reached northwestern New York, and the Asian long-horned beetle has come as close as Worcester.

The report also highlighted a second key fact: some neighborhoods have more trees than others. For instance, College Hill and Wayland Square boast lush UTCs upwards of 30 percent, and the Blackstone neighborhood measures in at an impressive 40.1 percent. Combined, the three neighborhoods contain more than one fifth of the city’s UTC. Meanwhile, lower-income neighborhoods such as Washington Park and Upper and Lower South Providence sport the lowest UTCs in the city: 5.9 percent, 10.9 percent, and 9.2 percent, respectively. “Lower tree canopy cover often equates with poverty,” says Still. Judging by the maps in the Urban Forest report, this is essentially a steadfast rule in Providence.

Still is quick to note that some of this disparity is out of his office’s control. A large portion of trees in Providence’s wealthier neighborhoods are planted on private lawns and the Forestry Division only plants in public spaces. But Still’s office doesn’t deny its responsibility to distribute tree wealth more equitably. A map of street tree density, a statistic that does not include private trees, reflects many of the same inequities highlighted in the UTC-by-neighborhood map. These maps exist because the Parks Department devoted substantial resources to make them, and through a public-private partnership known as the Providence Neighborhood Planting Program (PNPP) the Forestry Division and their volunteers have begun deliberately planting in low-UTC neighborhoods for essentially the first time in Providence’s history.

According to their website, PNPP was founded in 1988 “as a means of providing a consistent match of Providence Parks Department funds for the continued planting of street trees in Providence at a grassroots level.” The funds that match city money come from the Mary Elizabeth Sharpe Street Tree Endowment, which is, according to PNPP’s Director Cassie Tharinger, entirely bestowed by local philanthropist Peggy Sharpe.

PNPP provides free trees to groups of more than five neighbors who fill out a Neighborhood Street Tree Award Application. If an application is accepted, a mix of city workers and volunteers plant trees in the strips of grass between the sidewalk and curb. On streets where lawn strips are either nonexistent or too narrow to foster a tree, PNPP will cut wider berths in the sidewalk.

PNPP recently announced an explicit approach to planting trees where they’re needed most. The organization now prioritizes applications from the following ten neighborhoods: Elmwood, Smith Hill, Federal Hill, Valley, Olneyville, Washington Park, Reservoir, the West End, and Upper and Lower South Providence. However, identifying target neighborhoods is not an act of public service by itself, and following through has proven surprisingly difficult for PNPP. Despite offering trees and planting assistance for free, PNPP has struggled to attract applicants from neighborhoods with low UTC cover.

Still attributes much of this discrepancy to a lack of awareness about PNPP. Members of PNPP present at various community meetings but they do not devote any of their budget to conventional advertising. Awareness is also only one part of the problem.

PNPP’s Neighborhood Street Tree Award Application requires time and resource dedication that might discourage low-income residents and more transient renters. PNPP provides free trees on the condition that residents mulch, weed, and feed each tree 20 gallons of water per week, a commitment far less costly than the price of a new tree but a cost nonetheless. Furthermore, tenants cannot apply for trees without a signature from their property owner. Absentee landlords can be difficult or even impossible to reach for a signature. PNPP also only offers an English version of the application, despite the fact that English is not the first language of many residents in Providence’s lower-income neighborhoods. In the interest of lessening the applicant’s load, Tharinger plans to translate the application into Spanish and Portuguese and to draft a stock letter that interested tenants could send to their landlords.

PNPP has succeeded in finding committed leaders in their target neighborhoods. Tharinger calls them “tree people.” PNPP recently connected with a tree person in Washington Park who requested 50 trees for her neighborhood and intends to organize more plantings. A different resident in Lower South Providence has orchestrated the planting of over 90 trees in his neighborhood. But PNPP’s community leaders have a difficult time assembling the volunteer labor and five signatures of property owners required to file a Neighborhood Street Tree Award Application. Still hopes that as PNPP does more work in low-UTC neighborhoods, the organization’s name will spread via word of mouth and more residents will warm to the idea of signing on. 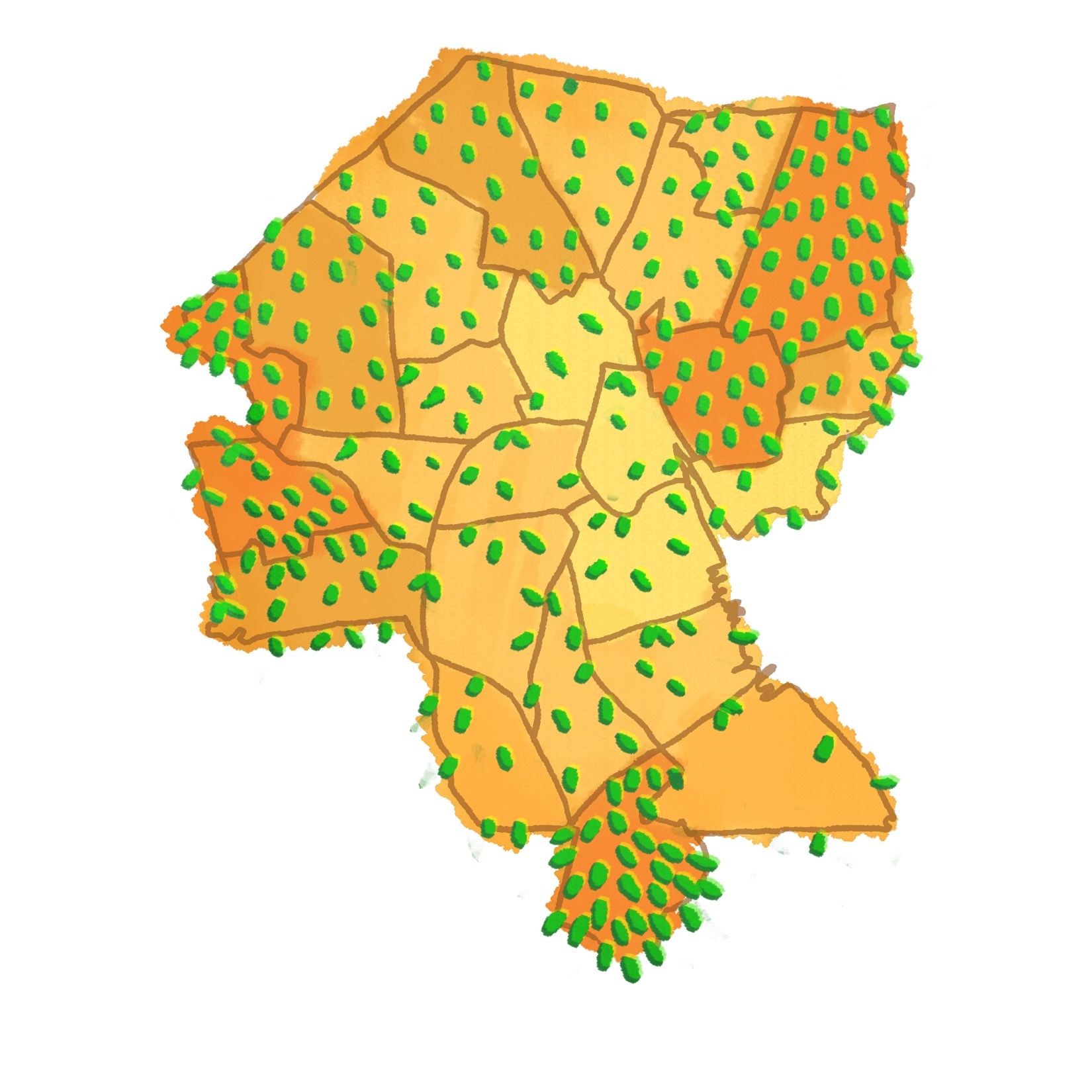 In a good year, Groundwork, a community-based non-profit environmental organization, can contribute an additional 75 trees to the effort. Because Groundwork sells its trees at cost to tenants and homeowners, they are able to plant on private property if they want to, opening up a huge proportion of land in low-UTC neighborhoods that PNPP cannot plant on. By Rose’s estimation, Groundwork and PNPP are the only organizations planting a significant number of trees in low-UTC neighborhoods. Rose considers the two organizations to be “very much aligned.”

By Still’s calculation, it may require as many as 40,000 new trees to achieve a 30 percent urban tree canopy cover in Providence. Unsurprisingly, if PNPP wishes to reach their goal in a timely manner and significantly increase UTC in their target neighborhoods, they will need more money to do what Still calls “contractor planting”. Unlike the volunteer-staffed planting orchestrated by PNPP, contractor planting does not require residential involvement. Under this alternative model, the Forestry Division receives funding separate from PNPP’s sources and pays private workers to plant and maintain trees in low-UTC neighborhoods where PNPP has failed to attract applicants. In this sense the circumvention of residential involvement is an advantage, but it also has its downsides.

As noble as PNPP’s intentions are, the effects of street tree plantings in PNPP’s target neighborhoods must be thoughtfully examined. Oftentimes, public investments do not reach the residents for whom they are intended. Last month, the College Hill Independent reported on public outcry against Mayor Elorza’s Everyhome program, which highlighted the potential perils of investing in low-income neighborhoods without community involvement.

According to a press release published in October, Everyhome is “a suite of tools [that puts] local businesses to work rehabilitating and filling every boarded and abandoned property in the City of Providence.” The Direct Action for Rights and Equality (DARE), a Providence-based advocacy group for low-income families in communities of color, rallied at City Hall and called for 50% of Everyhome’s housing units to be designated low-income affordable. Elorza’s administration has not committed to any affordability benchmark. Residents worry that houses rehabilitated through Everyhome will sell for prices that members of their community can’t afford. Many also worry that these renovations will attract other investments in their community not intended for them—investments that may eventually price them out of their homes.

The rally DARE organized called attention to a recurring catch-22: without sufficient affordable housing, investments intended to improve quality of life in a renting neighborhood can inadvertently displace many of its residents. Even entirely generous investments like free tree plantings can galvanize residential displacement and gentrification.

This happens because street trees increase property value. A 2010 study by economists Geoffrey Donovan and David Butry estimated that, holding all else constant, lining a street with trees increases the average home price on that street by $7,130. Though Donovan and Butry used data exclusively from Portland’s housing market, the study’s generalizability was touted in coverage by the Wall Street Journal and Atlantic Media’s Citylab. A follow-up study in 2011 estimated that the addition of a single street tree in front of a property increases monthly rent by $21. Donovan and Butry’s estimates suggest that tree plantings can significantly contribute to or even catalyze residential turnover.

Pointing out the potentially harmful effects of investment in a neighborhood is not meant to discourage infrastructure improvements in underserved neighborhoods. Instead, it aims to underscore the importance of investing in affordable housing contemporaneously with other neighborhood investments. PNPP and Groundwork hope to even out the distribution of valuable public goods like trees across Providence. Providing affordable housing does not fall within the domain of those organizations. Ensuring that the intended residents can afford to reap the benefits of PNPP and Groundwork’s investments is a responsibility that falls to Elorza’s administration.

BEN BERKE B’16 will be volunteering at the next planting day, April 9, in Mount Hope