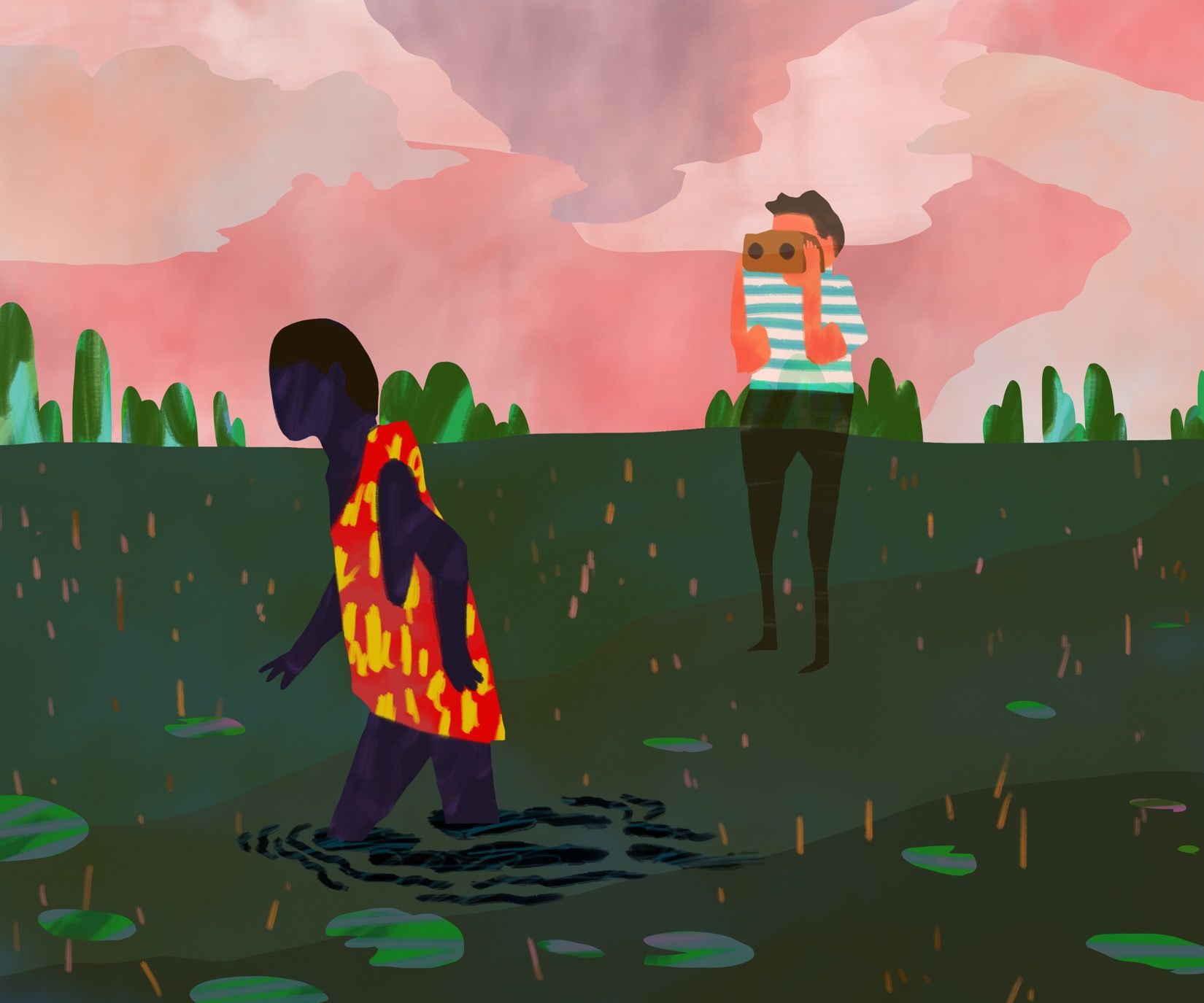 Chris Milk believes we have found “the ultimate empathy machine” in the form of Virtual Reality (VR). Formerly a renowned music video director, Milk has become something like the 21st century patron saint of VR filmmakingthrough his pioneering work. According to those who follow Milk’s gospel, VR will not only transform our ability to tell stories, but also extend our capacity for human connection and compassion. Until recently, VR was primarily considered a niche in the gaming industry, but in the past year it has gained momentum in the world of journalism as a means to immerse viewers in real-life stories.

“I wanted to go further, to pull people through that window onto the front lines and let them witness it firsthand,” writes Danfung Dennis, an award-winning combat photo journalist, in an essay for the New York Times explaining what compels him to produce VR stories. “The power of virtual reality is its command of presence—its ability to transport the viewer into another world, and have him feel present in it.”

Proponents claim that VR offers a transcendental experience and the ability to step into another world. But, in its current uses, particularly in the Times, VR actually represents a more subtle form of manipulation than its counterparts in film and photography by fostering the illusion of presence and the perception of truth. Moreover, the power of VR in many recent manifestations has been harnessed to promote corporate agendas, revealing a need to question the perceived truth and validity of VR content in a journalistic setting.

If you ask an executive at the New York Times what they think of VR, they’ll tell you that, more than empathy, it’s the ultimate advertising machine. Traditional newspaper advertising is becoming less effective, considering our access to Internet ad blockers and the sad truth that most people no longer buy print papers. This means that new forms of advertising need be found. The Times noted as much in its leaked 2014 Innovation Report, a self-critical internal review outlining a strategy for adapting to the digital age: “The wall dividing the newsroom and business side has served the Times well for decades, allowing one side to focus on readers and the other to focus on advertisers. But the growth in our subscription revenue and the steady decline in advertising—as well as the changing nature of our digital operation—now require us to work together...Increased collaboration, done right, does not present any threat to our values of journalistic independence.”

Two years later, how has this collaboration of newsroom and business manifested itself? With a story sponsored by Purina pet food, about dogs. Shelter dogs, specifically. The Times has created a native advertising unit, T-Brand Studio, to produce paid-for feature stories in an attempt to increase ad revenue. Other stories have included an interactive and heavily reported piece on women’s prisons (as a promotion for Orange is the New Black) and a video for Holiday Inn about a family’s last trip with a dying mother.

When the Times prepared to launch its revolutionary VR program (NYT VR) it intuitively understood VR’s potential for native advertising and worked with T-Brand Studio to form a series of unusual partnerships—with Google, General Electric, and Mini—to help acquire the funds necessary to build a new platform for VR. In turn, the Times promised to work with its partners to develop VR stories showcasing their products.

Native advertising spans all mediums and is not unique to the Times or VR. Nevertheless, the fact that NYT VR could one day become a primary advertising catalyst for the Times is troubling. What will likely embody the most potent form of storytelling for one of the most respected news site in America is developing in a manner closely linked with corporate interests.

It appears that so far NYT VR has mostly been used as a way to disseminate corporate and political agendas. Since 2015, when it first created a VR platform, the Times has produced nine VR stories. Only three could be considered purely journalistic: a story on displaced child refugees, another showing scenes from the Presidential campaign trail, and a third reflecting on a Paris vigil. The rest are nothing more than fancy and well-camouflaged advertisements and PR projects.

Among these is Lufthansa’s “Love is a Journey” (“Be inspired by Marc’s journey…to a very special destination”), an animated look into “Our Industrial Future” for GE (“Connecting ourselves, our world, and our machines for a more brilliant and inspired future!”), and a downright bizarre video for Mini-Cooper called “Real Memories” (“Follow Max down a mysterious road to uncover his past”). This is not journalism. And that would be fine, if there was a clear separation on the website between videos purely for advertising purposes and those attempting to tell more serious stories. Instead, on the NYT VR site, all the videos are lumped in together, with little to distinguish between them, easily risking misleading viewers. (Imagine if scattered on the front page of the Times were both real news stories and disguised advertisements). If the Times wants VR to be taken seriously as a medium for independent journalism, it cannot continue to straddle both the newsroom and the business side.

Even the VR content the Times has produced in a strictly journalistic capacity has not been without its fair share of problems. Therein lies the other dilemma of the future of VR.  How will we, as a society, react to VR content, especially when it comes in the form of supposedly unbiased and unmediated journalism? Will we blindly accept what we see when we strap on the headsets as unfettered reality? Much in the same way of some human rights campaigns, VR in its current state has often come off as sentimental voyeurism, an experience strategically designed to pull on the heartstrings without actually touching on any of the real issues at hand in a critical manner.

On November 7, 2015, 1.3 million Sunday subscribers to the Times received a curious cardboard package with their morning paper. The cardboard turned out to be a make-it-yourself virtual reality headset, which connected to readers’ iPhones and enabled them to download and view “The Displaced,” an 11-minute video following the lives of three child refugees from war-torn countries—Hana, a refugee from Syria; Chuol, a boy from South Sudan; and Oleg, a nine-year-old living in Ukraine. For the first time in the history of the Times (and mainstream news), virtual reality had been used to create a journalistic video, available to anyone with the ten-dollar cardboard headset and an iPhone.

In one scene, Oleg and his friends explore the bombed-out ruins of their school as Oleg speaks in a voice-over:

“Before, when the teachers would yell at us, we’d say, ‘Wouldn’t it be cool if the school blew up?’”

He climbs over a desk amidst piles of rubble.

“I would never say that now.”

A haunting silence follows. Look up and you see the white, cracked ceiling of the school; look down and you see the dirt, the same as Oleg stands on, with its strewn chunks of concrete and school supplies.

There is certainly an expectation to empathize, largely due to the sense of pseudo-intimacy between viewer and subject throughout “The Displaced”—subjects break the fourth wall by constantly staring at the camera. This intimacy is heightened by the fact that for any sort of moving VR shot, the subject must physically bring the camera along with them (the director cannot carry the camera or she will be in the image). In “The Displaced”, this means having Chuol, the Sudanese boy, place the camera in his canoe as he paddles through the swampland. Or it involves sticking the camera with Hana in the back of a truck full of Syrian refugees, all of whom seem to be casting shy, smiling glances at you.

Such intimacy conveys enormous power, but what results from this newfound, one-sided relationship? VR implicitly disguises the fundamental underlying truth that what you are seeing is a fragment of someone else’s existence. This fragment is only a very small sample of their life (often contrived, since VR creators usually have to ask their subjects to re-do certain actions) and of everything the person has gone through to get to that point. VR may, under the right circumstances, have the capacity to be a vehicle for genuine compassion and lead to meaningful action. Unfortunately, what “The Displaced” really provides us is more like an illusory experience founded on the promotion of the specific corporate interests of T-Brand Studio. At best, with Lufthansa’s “Love is a Journey”, NYT VR provides a fancy spectacle in service of a brand. At worst, with “The Displaced”, it offers the creation of a pseudo-reality that commodifies and aestheticizes human suffering.

It’s along the lines of seeing a powerful photograph but nothing else. There is certainly a reaction, but it feels hollow without a deeper context for what one is seeing. Feeling present does not correlate with genuine understanding. The most powerful kind of empathy stems from careful and nuanced understanding, and that is what is needed to affect change—not oversimplified sentimentality.

“It [VR] is an experience, and we hope that experience equals a memory,” says Michael Villaseñor, creative director of marketing for the Times. It’d certainly be exciting to consume our news at the level of a visceral experience. But do we really want that? The danger with VR being used in this way is that, while it may try to make us feel, it doesn’t necessarily make us think in the same way a thoughtful feature story or documentary might. Sidney Levin, executive producer of T-Brand studio, says of VR:  “You are like a ballerina in a box, you can spin around but can’t actually get out of the box.”

The comparative distance of text and video means that they allow us to not only look into the box but outside of it as well, separating us from the people whose stories we consume and enabling us to perceive their relation to the bigger picture, and there is something to be said for that.