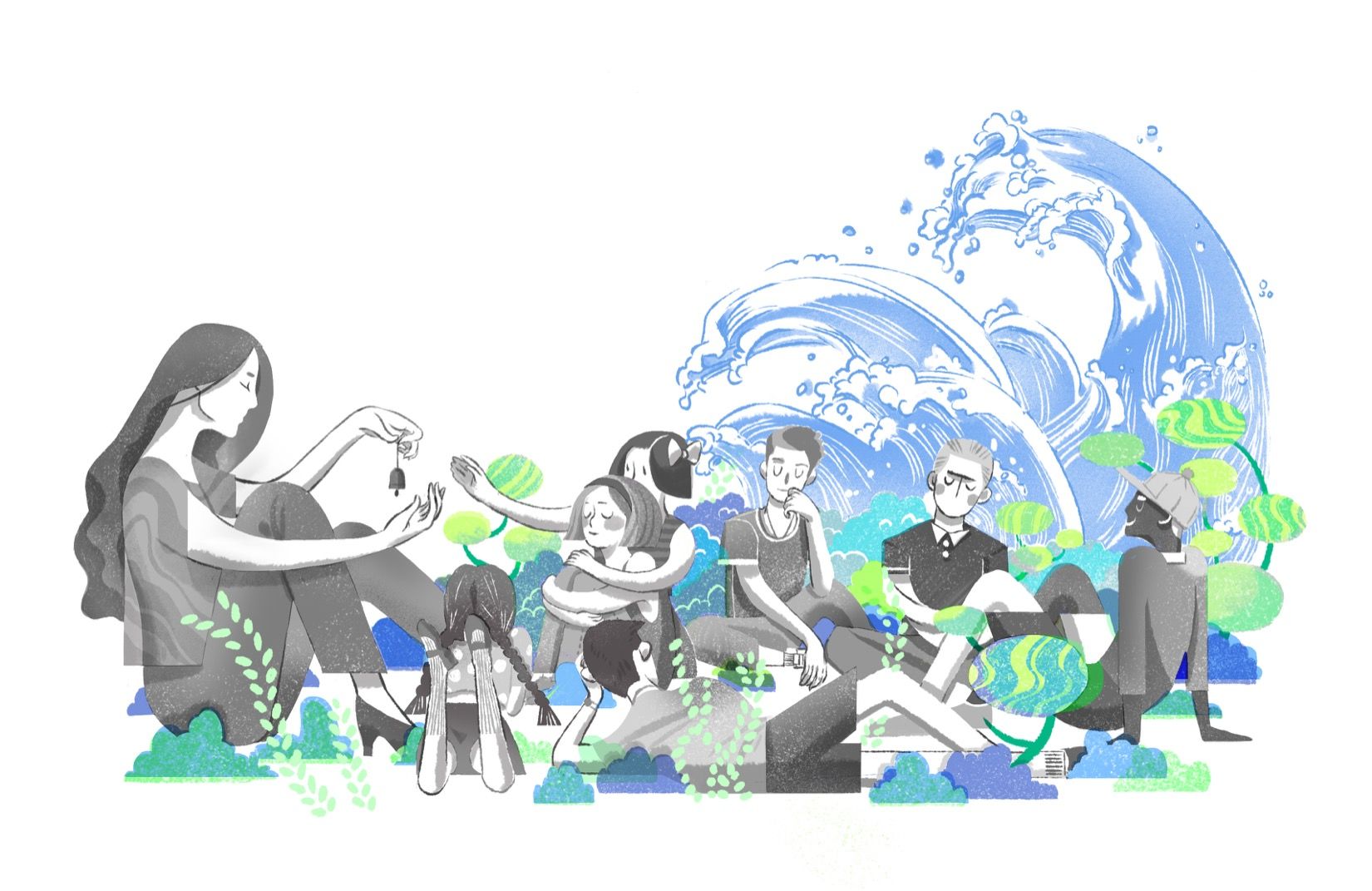 Find your mindful body. Find an anchor for your breath. Close your eyes. These are the instructions that Shannon Smith, a mindfulness instructor at the Providence-based non-profit ResilientKids, uttered to a classroom full of five-year-olds at William D’Abate Elementary School in Olneyville. I accompanied her to a mindfulness training class on a gray Thursday afternoon. Smith worked as an elementary school teacher for seventeen years, but switched to part-time mindfulness instruction two years ago. She teaches this group of kindergarteners at William D’Abate twice a week, for 20 minutes each. Smith is warm, amiable and optimistic. She exudes a confident serenity and genuine passion for her work. In total, she works at five schools and 15 classrooms with kids between kindergarten and fifth grade. “It’s pretty powerful when you see kids connecting to [mindfulness lessons],” said Smith.

Mindfulness is not new. Despite all the hype around mindfulness in recent years, it has roots in Buddhist religion and philosophy, in which mindfulness is considered an important stepping-stone on the path to enlightenment. Mindfulness can be defined as any of the following: attention, focus, presence, or awareness. Mindfulness can also be defined by what it is not: distractedness, disengagement, inattention. In an age of heightened distraction, more people are turning to mindfulness training—often practiced in conjunction with meditation—to regain focus and exercise being fully in the moment.

Vanessa Weiner is the founder of ResilientKids, which aims to use mindfulness curricula and training to enhance the social, emotional, and academic growth of young people. Weiner first discovered mindfulness while training for the Olympics as a young girl. As a mother, she started practicing meditation with her own children, subsequently realizing the huge demand and potential for mindfulness training more broadly. “I needed these tools for my own kids who weren’t really getting this in their school. I was inspired to offer some classes on an after-school basis so that my kids could participate,” said Weiner, “but ultimately there was a tremendous need. With so many kids signing up, it showed me that it wasn’t just my kids who needed these tools.” The “need” Weiner refers to can be supported by the fact that, according to the Rhode Island Department of Education, more than one-third of all public schools in Rhode Island’s core cities that serve the highest proportion of low-income children have been identified for intervention due to poor academic performance. Moreover, the Rhode Island Department of Health reported that in 2009, high school students who received a D or F grade faced greatly increased health risks such as suicide, drugs, alcohol, obesity and depression. Studies have shown mindfulness meditation as leading to significant improvements in anxiety, academic performance and enhanced social skills. Beginning in 2009, Weiner was the first person in Rhode Island to formally integrate a curriculum-based approach to social and emotional learning through mindfulness practice within the school day. ResilientKids was founded in 2011 and hasn’t stopped growing since. To date, ResilientKids has worked with over 5,000 school-aged children in Rhode Island.

More and more schools are applying to get ResilientKids into their classrooms. At first, ResilientKids sought out schools, but now, schools seek them out. ResilientKids is also expanding into neighboring Massachusetts. With nine employees—eight part-time instructors and the founder—the biggest issue to expansion is the logistics of making sure the organization’s limited staff can devote adequate time to students and classrooms. The programs are structured to be weekly and year-long, since the most successful programs have been those with regular, long-term contact between the instructor and students. To support their school-based operations further, ResilientKids is now in the process of a rebranding initiative to offer private workshops and training for paying adults. ResilientKids is branching out into community and workplace, seeking to grow their presence and cultivate more funding for school-based initiatives. Because Rhode Island public schools have insufficient funds to finance classes with ResilientKids, 90-95% of funding for classes comes from private donations, fundraises and grants. Schools themselves make a small monetary contribution depending on their ability to pay. Currently, there is a graduated imbursement system in place whereby more affluent schools pay a higher price for mindfulness training, and low-income schools pay significantly less.

Smith and I entered a classroom filled with twenty giddy kindergarteners for whom this was their first experience in school. Most of the five year olds were ESL students from Spanish-speaking homes. On the walls of the classroom hung posters featuring photographs from the famous Civil Rights march from Selma to Montgomery and a portrait of Ma-to-toh-pe, a chief from the Native American Mandan tribe. The whiteboard read: “Bienvenido a la calle de la lectura! Como vivimos trabajamos y jugamos juntos?” And in English: We live together, we play together.” Underneath were new vocabulary words: armar, fragiles, grua, inventor, redondo, taller. Upon entering the room, the kids, seated on a square blue carpet cried: “Miss Shannon! Miss Shannon!” In a stern voice, their teacher Miss Suarez commanded the children to stay calm and quiet: “Cálmate, cálmate.”

Each session is structured to include breathing and movement exercises, followed by a lesson incorporating mindfulness and social and emotional learning. Social and emotional learning is the process by which people acquire skills to manage their emotions, express empathy, cultivate positive relationships, and create and pursue positive goals. After some brief stretching and deep breathing exercises, Miss Shannon instructed the kids to sit in a big circle on the carpet. She took out a small, gold bell. The exercise was to pass around the bell without making any noise. One by one, the kids stood up slowly, walking carefully with the bell in their hands. Behind the simple task was a more complex lesson: to expose the kids to relationship skills and building community, and the impact an individual can have on the group. Amazingly, the kids were for the most part fully engaged and remained focused on the task at hand. I was incredulous that among this group of five year olds, there was no fidgeting, fighting or talking.

The results substantiate ResilientKids’ core mission, methods, and success. “Mindfulness can really empower students to self-regulate, stay focused, to find their own daily source of happiness and gratitude, and to maintain deeper connections with others around them. To empower kids with those tools is different from them passively taking part in some other therapies that are out there,” said Weiner. By teaching children of all ages to better manage anxiety and reduce toxic stress, develop concentration, self-awareness and compassion, ResilientKids prepares children for stresses inside and outside the classroom and enhances their overall learning experience.

Despite growing enthusiasm for mindfulness, some psychiatrists have warned that it can have disturbing side-effects. Experts on mindfulness say that in rare cases, certain people can react badly to mindfulness. When potentially vulnerable individuals—such as those suffering from mental illness, depression and anxiety—are not in a stable place to undergo mindfulness training, some can emerge with increased self-criticism and feelings of failure. Ed Halliwell, a mindfulness instructor in London, said: “You can sometimes get the impression from the enthusiasm that is being shown about it helping with depression and anxiety that mindfulness is a magic pill you can apply without effort…It is not like that at all. You are working with the heart of your experiences, learning to turn towards them, and that is difficult and can be uncomfortable.” There is also the issue of under-qualified and poorly trained teachers posing as experts on mindfulness. Oxford University’s mindfulness center clinical leader Marie Johansson advises that instructors receive at least one year of training in order to be able to safely work with practitioners.  Psychiatrists caution that mindfulness instructors must understand the fundamental aspects of mental issues and to know when to refer people to be seen by specialists.

At the outset, ResilientKids worked primarily with children in public and charter schools in low-income areas in the greater Providence area. Some of the challenges these children face include violence, poverty, housing, with some living in high crime neighborhoods. Since then, ResilientKids has expanded their operations to include a wide variety of schools. These children face a different set of stresses: academic performance, testing pressure or high expectations from parents. “Each generation faces its unique challenges. Kids these days are experiencing something well beyond I did growing up—social media and technology in particular are a whole area of social pressure kids everywhere are experiencing,” said Mark Allard, another ResilientKids board member. Despite the children’s range in backgrounds and everyday stressors, mindfulness training can contribute to mitigating the effects of all these stresses. Allard himself participated in a mindfulness program designed to expose adults to various forms of mindfulness and meditation, run by Brown University Professor Willoughby Britton in the summer of 2015. Now a regular practitioner of mindfulness and meditation, Allard touts its incredible healing effects for a myriad of maladies.

Mindfulness can be an extremely powerful tool even for those who unwittingly practice it but don’t know it by its name. Jim Scanlan, a ResilientKids board member, unknowingly practiced mindfulness throughout his childhood. A Rhode Island native, Scanlan is a sex-abuse survivor. He was portrayed recently in the movie Spotlight—a film that portrays the Boston Globe Spotlight Team’s Pulitzer-Prize winning investigation of the Catholic Church’s systematic concealment of sexual abuse by its clergy in 2002—as “Kevin from Providence.” Despite his alias in the film, the sexual abuse he suffered while at Boston College High School in the late 1970s is completely true to life. “Because of what I went through and knowing what kids can go through in difficult times—that’s why I fell in love with [ResilientKids] and why I support it so much. I happen to be one of the fortunate ones, for whatever reason. I didn’t have formal training in mindfulness but I knew the power of it and I knew what I did in terms of separating things,” Scanlan said. By “separating things,” Scanlan means compartmentalizing: for three years while in high school, he was able to successfully put aside the “one slice of real evil” in his life. “I stayed at my high school, I stayed on my team with [the perpetrator] as a coach because I didn’t want him taking other parts of my life—the things I loved. And I was able to separate, to have a positive look on things even though I spent the next three years with him around me. At the end of the day I didn’t realize I was practicing my own form of mindfulness,” said Scanlan. Today, Scanlan helps ResilientKids fundraise and spread awareness about its activities.

At the end of the twenty minute long session led by Miss Shannon, a remarkable calm had fallen in the classroom. It was a brief and rare respite from the usually energized and occasionally frenzied behavior typical of children their age. Miss Shannon asked: “What’s that place that we can go to inside?” One student answered in a soft but assured voice: “Our secret spot, our quiet place.”

MADELINE MATSUI B’17 is mindful of mindfulness.