Waxwork and the Laboring Body 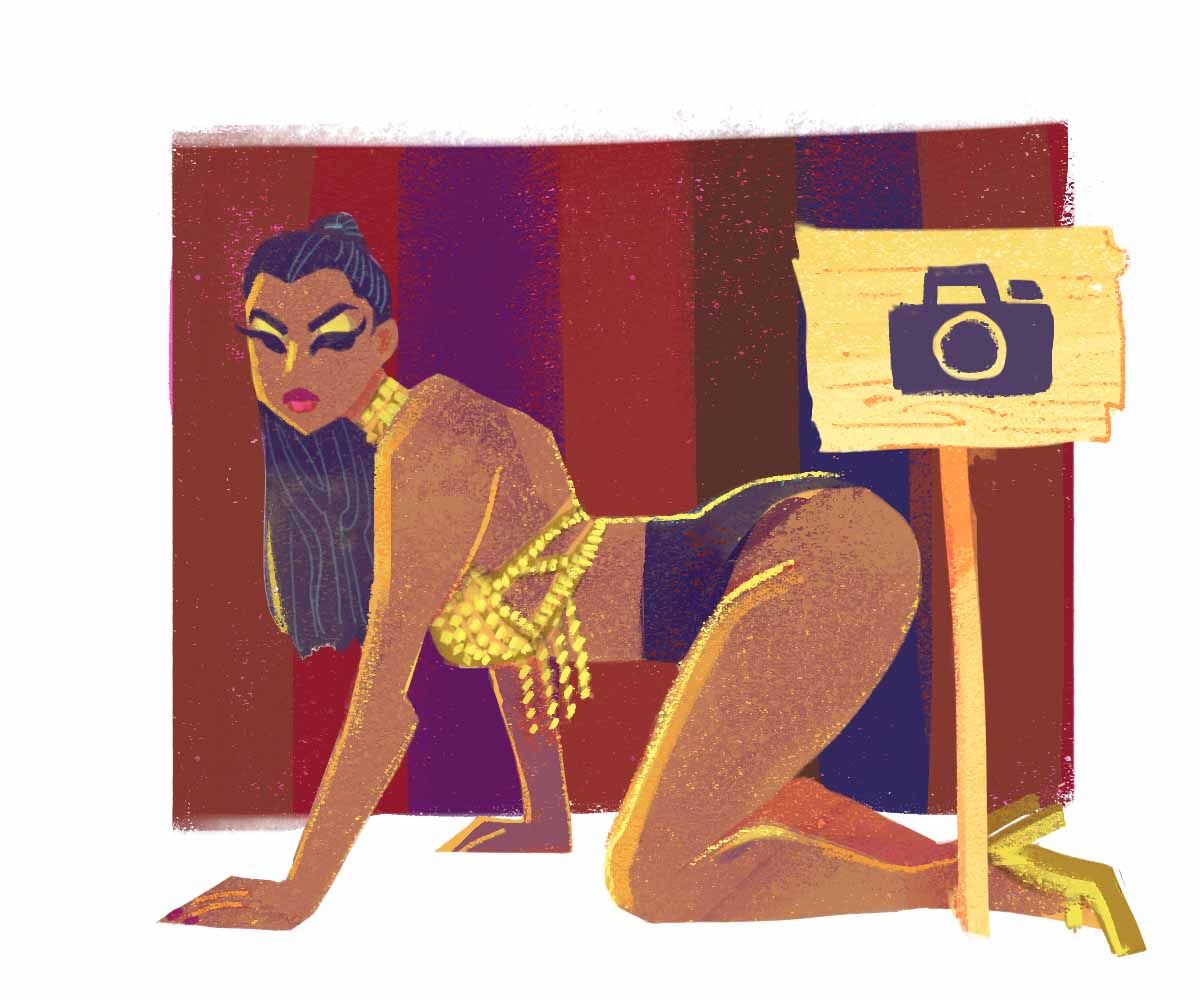 When a wax figure of Nicki Minaj was unveiled in Las Vegas this past August, fellow rapper Azealia Banks tweeted in defense of Minaj and the figure’s hyper-sexualized pose: “All ppl are gonna do is go up to that statue and take pictures shoving their crotch in her face and putting their crotch on her butt.” And that’s exactly what happened.

Madame Tussauds brands their figures as interactive. You can walk up to them, touch them, hug them, take selfies with them. In a Vanity Fair article from last year about a Hollywood wax museum, Devon Maloney wrote that after taking down their “Please Don’t Touch” signs in the 90s, wax museums “have become a tactile, interactive celebrity experience that counteracts our digital lives, in which @-replying Harry Styles a million times has the tendency to estrange one from the real world.” Wax figures possess the power to connect celebrity devotees with their icons in some sort of tactile reality. Tussauds general manager Dalia Goldgor said in an interview with Vanity Fair that the company is thriving: “We’ve been around for over 200 years, and [considering that most] people are not going to ever be able to get this close to celebrities, we’re going to be around that much longer.” Tussauds parent company, Merlin Entertainments, bought Madame Tussauds in 2007 for $1.9 billion, about half a billion dollars more than its previous owners paid two years prior. According to a 2013 earnings report, the company saw a 12% increase in attendance and a 14% increase in revenue from 2012 to 2013. Even if it’s not the desire to tweet at a member of a boy-band that drives a person to visit a wax museum, a sector of spectators is lured by the inherent campiness and creepiness of the wax bodies. However, the figure of Minaj on all fours is an extreme example of a wax figure that has been imposed by race and gender tropes, whose body is hyper-sexualized and objectified. Minaj’s body becomes a spectacle. The figure evokes Saartjie Baartman, a 19th-century South African woman who was subject to severe racism and sexism, as her body was paraded around Europe in human zoo exhibits. After Baartman’s death a French doctor dissected her body and for over 150 years her brain, skeleton, and genitalia were displayed in the Museum of Man in Paris. The Minaj wax figure has no control. Not only is she held captive, but spectators are allowed to touch her.

Madame Tussauds goes to great lengths to cater to their celebrity subjects. Tussauds sculptors will travel anywhere in the world to meet up with a celebrity at their convenience. The Dalai Lama’s sitting for his sculpture happened in an airport. A team of Tussauds employees examine the star’s public relations image and aim to reflect this in the replica. “We discuss pose, expression and the image of the figure with the sitter,” their website states. Once the team has arranged their sitter, they take meticulous measurements and photographs from all angles.

How the figure is built is a matter of structural soundness: the materials must support the “pose.” A skeleton is made out of steel and aluminum rods, then bulked up with rolled up newspaper that is held in place with chicken wire. The Tussauds website states that “aluminum is used for the arms because it is strong and can be moved aside while the body is worked on.” Slabs of clay are then applied to the armature, to create a mold into which wax is poured. An online video shows a herd of technicians hunched over a Lady Gaga head, painstakingly inserting each individual strand of hair, as if chiseling a marble monument.

Today, body-enhancing rhetoric provokes us to reach an ideal state of body and then once reached, maintaining it, never changing. We are encouraged to reach a perfection of bodily form and then hold it captive, although we constantly displace that goal. While the enshrinement of the celebrity body by way of wax figure is a flattering PR stunt, it’s also a reminder that to change shape and grow old is to deviate from a static perfection.

Tussauds figures, mummified shortly after the time the sculptors take measurements and photos, are forced to stay still. Yet, real-life Oprah’s weight goes up and down, and real-life Minaj might need to take a break. In contrast with Tussauds figures, Duane Hanson’s sculpture of a delivery man, sitting on top of a metal cart of boxes, clipboard aside, soda in hand, staring blankly at the floor, depicts a man taking a break. Hanson’s photorealist sculptures reek of authenticity. Hanson worships change and fluctuation of bodies by blatantly acknowledging that his people are stuck, unable to change or move—and that is their great tragedy. Hanson said of his work, “I show the empty-headedness, the fatigue, the aging, the frustration. These people can’t keep up with the competition. They’re left out, psychologically handicapped.” Hanson is concerned with real societal problems that are decaying real people. His frozen figures mirror this relationship.

Duane Hanson started making his figures in 1967, creating body molds from live models, often just people he spotted on the streets. They are modernist embodiments of alienation and loneliness: security guards, homeless people, workers on scaffolding painting someone else’s house. Their stares are solemn, and if they are in pairs or packs they never interact. One pair’s eyes are drawn to a game of Connect Four, while a group of construction workers all face different directions. Hanson, who passed away in 1996, was fixated on the body’s pose. His figures are sometimes strangely crouched, or mid-step, or shifting their weight to one leg. Their positioning is the anti-pose, and one almost expects them to snap out of their momentary pause. An article from a 1999 USA Today states that “perhaps the ultimate paradox of Hanson’s realism is that his lifelike figures seem incapable of escaping their situations.” One of his figures, “Queenie II,” depicts a heavy-set, uniformed female janitor pushing, or rather, resting upon a plastic trash can, blankly staring out. The Saatchi Gallery’s website describes Queenie as being “understood on one level as the personification of all those resigned-looking women who drag their bodies around in pursuit of the mess created by the rest of us. But we are made to confront the fact that such women, who are usually invisible and ignored, are not just faceless domestics.” Hanson gives people like Queenie a permanent place in our recognition as bodies whose purpose is to clean up the messes thoughtlessly made by other bodies. In a strange way, the Tussauds sculptors are like Queenie, catering to other, more famous bodies. Hanson may have liked to make a figure of a Tussauds sculptor in the workshop, hunched over a pair of acrylic eyes belonging to wax figure version of Diana Ross.

The poignancy of Queenie is that she can never flee. Hanson’s figures aren’t even able to escape through decay. Another figure, “Man Riding Lawnmower,” is durable enough to survive outside. Although art restorers grappled with how to clean Hanson’s aging male “Janitor,” they were able to lightly vacuum off dust. While doing so, they discovered that his clothes were stuck to his body and could never be removed. They were also able to replace his broken watch. The only watch that they could find that resembled the original was operable and automatic, meaning it didn’t run on batteries, but needed to be wound. Temporality is warped for Hanson’s figures—they have checked out of real time.

In a day and age where we sculpt the form of our bodies by exercising and by means of beauty techniques—such as a non-surgical fat reduction treatment called “CoolSculpting” and Hi-Def Liposculpture that creates six-packs—Hanson’s reverence for the flawed, or the non-belabored human form, is enlivening. Bruce Katsiff, the director of the James A. Michener Art Museum in Pennsylvania, writes that since the days of Ancient Greece, sculptors have been fixated on presenting a human form that possesses an idealized physique, while in comparison “our own meager bodies, with their blemishes, sagging flesh, and countless other imperfections, seem frail and disfigured[.] Duane Hanson’s sculptures violate this tradition.”

Hanson’s figures have subtle finger hairs, hangnails, bruises, and varicose veins. Growth has occurred, nails have been bitten, veins ache with a pulse, and yet, the Janitor can’t move to make time start on his watch. The Janitor has stopped because he can no longer move. Hanson tells him that that’s OK, there’s no pressure to move, you’ve given enough. No one tells the Minaj wax figure that it’s OK to break her pose, and that if she wants to, maybe she should jab the museum visitor who is groping her hips against his with her stiletto in order to escape from captivity and re-gain her humanity. The Janitor is in an interim state and his catastrophe is that the demands of surrounding bodies have tired him so. He looks like he might move. In fact, we expect him to move, and yet finally, it has all caught up with him.

RYAN ROSENBERG B’17 is starting to wane.