Thrown Under the Bus 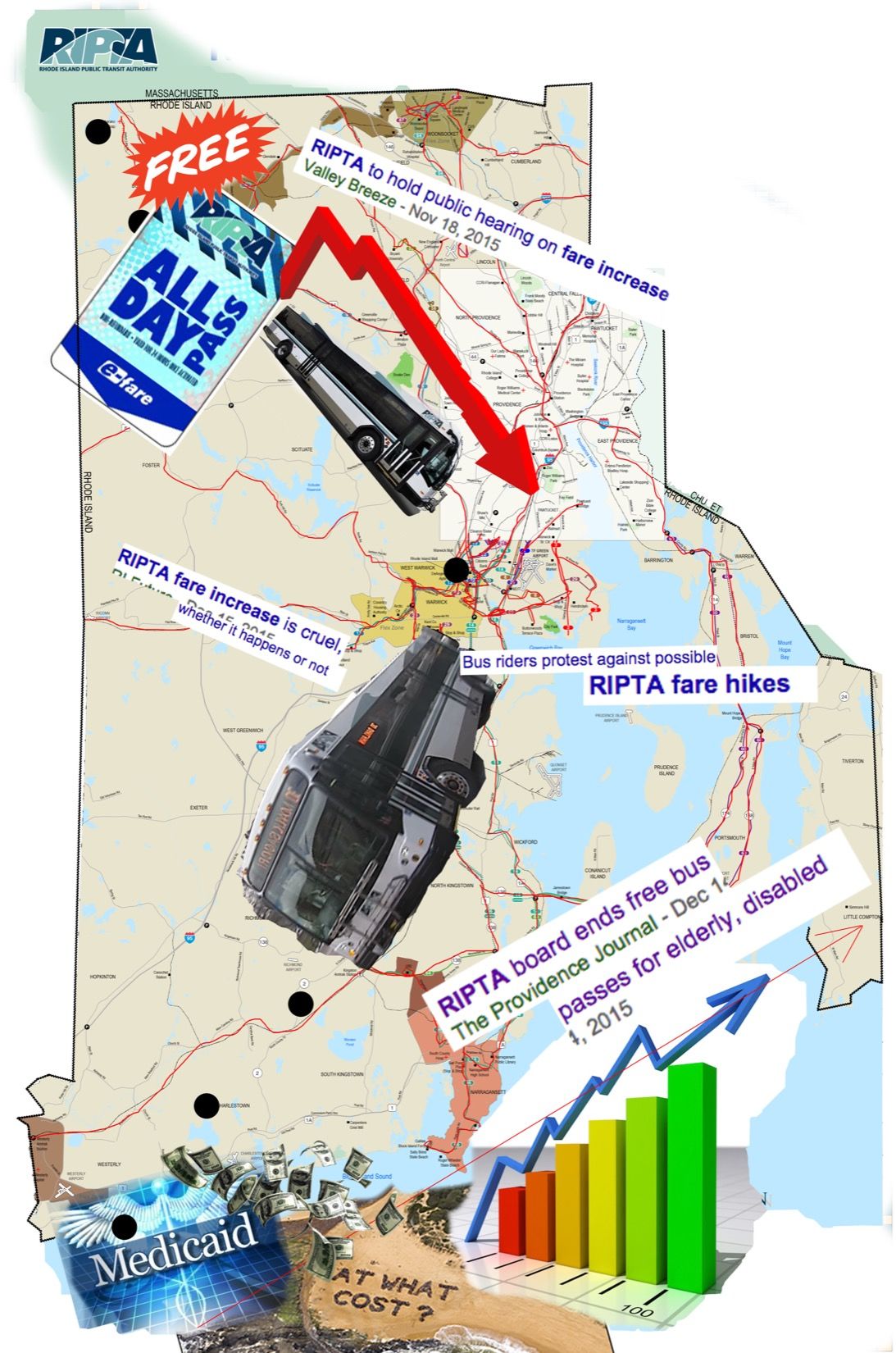 “RIPTA helps seniors get out and be more active, a good way to feel better about life.” Thus begins a video on the Rhode Island Public Transit Authority (RIPTA) website explaining its no-fare and half-fare bus pass program for seniors and people with disabilities. The video continues with a scene between a RIPTA representative and a wary-looking senior citizen: “I think every senior should plan a RIPTA trip with a BFF every time they ride,” says the cheery RIPTA representative. After a brief pause, some clarification: “You know, BFF means best friend forever.”

On December 14, 2015, the RIPTA board voted unanimously to revoke free bus passes for low-income elderly and disabled passengers. The board settled on charging 50 cents per ride to passengers who previously qualified for no-fare passes. Advocates for the elderly and disabled estimate that RIPTA’s decision will cause around 13,000 riders to lose their free passes, according to a recent Providence Journal article.

Fifty cents may sound like a measly sum, but the new fee is a hard blow to some of Rhode Island’s most vulnerable communities, providing a disappointing indication as to where the priorities of the state may lie. Nonetheless, this decision comes as no real surprise given the financial difficulties that RIPTA has faced over the past few years.

It is too easy to make RIPTA into an enemy. Their buses are often comically off schedule, and the organization lacks the sex appeal of public transportation systems in other American cities. Yet it is hard not to feel for an organization that has been tasked with efficiently moving millions of passengers annually but has been chronically underfunded for years.

For an organization that is so deeply in the red, RIPTA’s recent decision to terminate the no-fare bus pass program thus appears to follow a sound economic logic, albeit a chilly one. One oft-cited reason for the discontinuation of the no-fare program is that the state is missing out on federal Medicaid reimbursement that would otherwise be available if reduced or no-fare bus passes were not provided. Medicaid covers non-emergency medical transportation costs for its patients, meaning that the state loses out on millions in public funding by allowing Medicaid-covered passengers to ride for free. Low-income elderly and disabled citizens who are not covered by Medicaid, however, are left out of this equation. And while much of the discourse has centered on the lack of funds available to the organization, there has been no talk of structural adjustments to RIPTA’s funding model or the communities that their decision is going to impact.

The decision to revoke no-fare bus passes is predicated on a shortsighted budget fix that disregards long-term thinking about possible costs to the state. Charlie Fogarty, director of the Division of Elderly Affairs, draws attention to the future costs that such a decision might occasion: “If an individual on Medicaid needs to move into a nursing home from home-based care, the cost to the state is thousands of dollars annually.”

Governor Gina Raimondo also understands the far-reaching ramifications of the decision: “If your only way to get to the doctor is the public bus and you don't have 50 cents or one dollar, times however many times a week you have to go to the doctor, that's a public health problem." Raimondo was crucial in scaling back the original proposals made by the RIPTA board, which planned on charging $1 per ride for elderly and disabled passengers. Additionally, Raimondo played a role in delaying the elimination of the free bus passes until July of this year. RIPTA spokesperson Barbara Polichetti points out that this delay in addition to the delay of RIPTA’s other planned fare hikes has already cost the organization one million dollars in revenue. This from an organization whose deficit hovers somewhere between $1.5 and $2 million.

Funding for the public bus system in Rhode Island has long come from taxes on gasoline purchased within the state. Yet, as people begin to purchase less gasoline as a result of tighter budgets, more fuel-efficient vehicles, or perhaps even environmental consciousness, RIPTA’s funding decreases precisely at the moment in which it is most needed.

In short, the model is backwards. And yet, there has been no serious consideration of any structural changes. This despite a 2010 proposal spearheaded by the Sierra Club to make use of vehicle registration fees that currently go towards Rhode Island’s general fund.                 Other than this proposal, however, there have been few alternatives proposed to RIPTA’s current funding model.

This is an area that urgently needs more attention from the RIPTA board as well as state legislators. Considering RIPTA’s deeper structural insufficiencies, the organization’s recent decision to end its no-fare bus pass program looks to be a short-term fix to a much larger problem. And one that is going to have significant repercussions.

Rhode Island is one of the only states in the nation to offer free bus passes to elderly and disabled citizens. The no-fare bus pass program in Rhode Island far surpasses similar programs in other cities such as San Francisco, Philadelphia, and Chicago, with nearly a quarter of its riders—last year some 15,000 people—making use of the program.

Until June of last year, Rhode Island law explicitly required RIPTA to provide no-fare and half-fare bus passes to seniors and people with disabilities. A last-minute vote in June, however, permitted RIPTA to charge a fare to these communities for the first time in over four decades as a means to help with the organization’s budget issues. “I’m very concerned about the imposition of that fee,” said Senate President Teresa Paiva Weed. She continues: “I was glad the governor delayed it and reduced it from the original proposal. However, I'd like to see it eliminated completely.” Supporters of the no-fare bus pass’ termination have expressed some flexibility. “If the Senate is proposing something that is more sustainable for RIPTA, we would welcome that,” said spokesperson Polichetti. Currently there are no alternatives being proposed.

One thing that is lost in all of this talk about funding and deficits is the lives of those who will be affected by what is being falsely advertised by RIPTA as a small change. Governor Raimondo recognizes the need to pay attention to those she calls “our most vulnerable riders of public transit.” Removing the no-fare bus pass program will have extraordinary consequences for the lives of these passengers. “We must make sure we are weighing all options because mobility is an important part of being able to live independently,” Raimondo says.                 The termination of the no-fare bus pass program will come down hardest on the communities that are most dependent on the public transportation system. Unlike some other residents of the state, these communities often have no access to a personal vehicle and don’t have a university to foot their public transportation bill—as is the case for nearly all students of colleges and universities in Rhode Island.

RIPTA’s recent decision shows a clear lack of regard for its most vulnerable customers. It causes one to give pause over the organization’s mission statement, which cites the goal to be “responsive to our customers.”

On January 6 of this year, Providence Planning Director Bonnie Nickerson confirmed the end to Providence’s controversial streetcar plan. Amidst concerns about cost and ridership, the proposed streetcar may instead be replaced by an “enhanced” bus line along the same route.

The cost of the new proposal is $20 million, $13 million of which come from a federal grant with the state covering the additional $7 million. The “enhanced” bus line is scheduled to maintain the route of the streetcar from Providence train station through downtown, ending at Rhode Island Hospital. It goes without saying that this route—which is already heavily serviced by RIPTA—does not propose any major shifts in the transportation infrastructure of the city and doesn’t do much to help those who live outside of downtown or college hill.

While it is not entirely fair to directly compare this project to the termination of no-fare bus passes, the “enhanced” route proposal may provide some insight as to where the state’s priorities lie. Rhode Island’s moves in the coming months will reveal much about how the state seeks to be portrayed. Will Rhode Island be a state that shows support for its most vulnerable populations or one that instead allocates its funds towards flashy and arguably less necessary projects? As of now, the answer is clear.

JAMIE PACKS B’17 is hoping to ride the bus with a BFF.