Bush, Obama, Hollande, and a War of Words 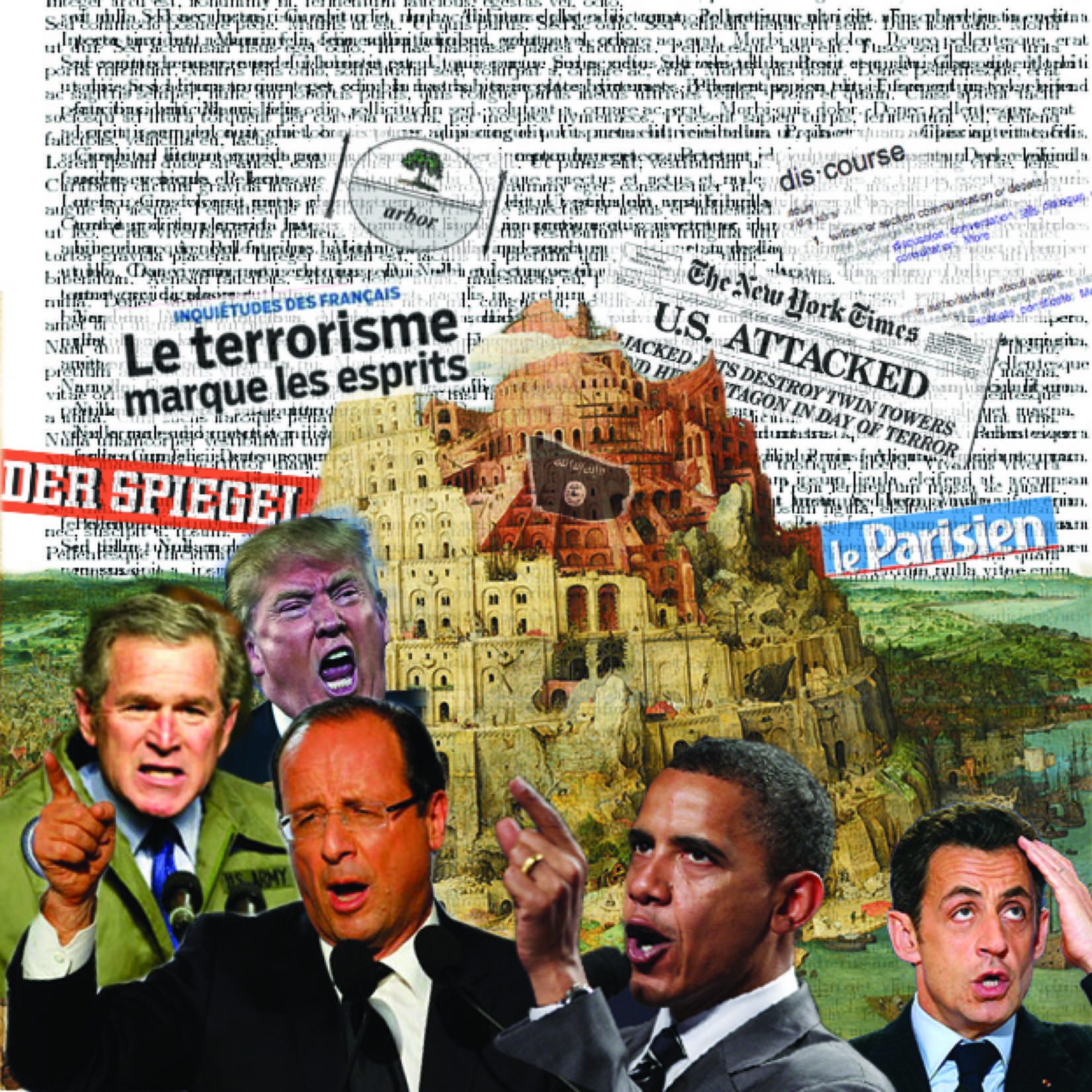 Presidents don’t just authorize wars—they author them. This became especially clear during the second Bush administration, a tenure that will be remembered as much for its hastily conceived wars as for its hastily conceived and broadly embarrassing rhetoric. Despite the fact that, in retrospect, many regard his policies and speeches as rash and ill considered, Bush was at least mindful of the potential backlash his language might bring upon Muslim American communities, a consequence that remains relevant to the wars and conversations we wage today. He told the country that the Iraq and Afghanistan wars were “against evil, not against Islam” and that those sponsoring this “evil” had “violate[d] the fundamental tenants of the Islamic faith,” a religion, he reminded Americans, “based upon peace and faith and compassion.”

But, of course, comments like these have not remained in our national memory as persistently as Bushisms like the “Axis of Evil” speech, the “Mission Accomplished” banner or statements like “either you are with us or you are with the terrorists.” We are more likely to reflect on the administration’s consistently dramatic tone, one that promoted an insulated and antagonistic worldview. In the landmark 2004 New York Times expose of the administration’s public relations mission, journalist Ron Suskind recounted how an “unnamed Administration official” told him “we’re an empire now, and when we act, we create our own reality.” According to this official, an administration, especially a war time administration, must imagine a new reality for the public to live and think under.

Memories of the more histrionic tenets of Bush’s speeches remain stronger than those of his mindful qualifiers, like those where he specifies terrorists as the target of his policies, not Islam. Qualifiers aside, Bush’s policies and attitudes were so alienating to Muslim Americans that support for Bush fell from 80 percent in 2000 to nearly 40 percent in 2004. By 2008, a remarkable 90 percent of Muslim voters cast their ballots for Obama. This may be because qualifiers—like those where Bush attempts to disassociate Islam and terrorism—condition or distract from a point, and so, don’t make the point. The sum of an argument remains markedly more memorable than its parts, and certainly more memorable than its qualifiers.

In studies of rhetoric, the relative futility of qualifiers is attributed to three elements that account for the ways certain messages take precedence over others: salience, audience, and receptivity. As audience receptivity of media messages declines—an advent accelerated by the rise of cable news, distilled or edited speeches and technology’s overall reduction of audience attention spans—a message’s salient points are elevated above its auxiliary points. Nuanced arguments—ones laden with qualifiers—are unfit to survive in the competition for lasting memory. When viewers turn off the television, they will only carry with them a few of the speaker’s often reinforced agendas or mantras—the same fragments that will be mined by historians someday. Today, the lesson to be taken from the Iraq War is, as far as Bush told it, that it was an “us versus them” conflict—‘us’ concretely defined; ‘them’ (maybe conveniently) loosely defined.

The new chapter of the war with the Islamic State, ushered in by the attacks on Paris last month, has already produced a few quotes to be carved into its history. Again, the number of people we are at war with—the size of the ‘thems’—is in dispute, as politicians and pundits argue over how the massacres should impact foreign and domestic policy. Again, a mixture of salient points and qualifiers have plotted the story of this war, one difficult to describe in cultural, religious, national, or ideological binaries.

To those with bloated approximations of the number of ‘thems,’ binaries tell the whole story. The struggle, they argue, is a “clash of civilizations” as Florida Senator Marco Rubio called it the day after the Paris attacks, referencing Samuel Huntington’s argument that cultural conflicts will define the post-Cold War world. A day after the attacks, Rubio made an advertisement arguing for a win-or-lose civilizational war, proclaiming “they [ISIS] hate us because of our values...because we are a tolerant society. ” Many have endorsed this misleading vision of the war with ISIS, believing that sides can be drawn along a civilizational—translation: ethnic-religious—binary. Donald Trump, who has become something of a pied piper for the American racist subconscious, has been promoting the idea that the ‘them’ can be found even within our borders. For Trump, this is best evidenced by our mosques, which he believes are petri dishes for terrorist activities, and by his claim that Muslim Americans celebrated 9/11 from New Jersey vantage points, an imagination of his now under dispute. These reckless notions promote reckless solutions: fighting terrorism means fighting Islam. A recent study by Public Policy Polling, conducted before the Paris attacks, reveals that only one in two Iowa Republicans would defend the legal status of Islam. One in three would choose to criminalize its practice.

Of course, Presidents Obama and Francois Hollande have not encouraged these manichean attitudes, explicitly stating that ISIS, which has “hijacked” Islam, is the sole enemy. But the efficacy of their attempts to disassociate ISIS from mainstream Islam is questionable. In their responses to Paris, Obama and Hollande both emphasized the violence’s symbolism. Hollande told the French Parliament that both France—“a country of freedom,” the “homeland of human rights”—and the French “way of life” were under attack, sounding a lot like Rubio. Obama echoed Hollande’s phrasing, emphasizing France and the US’ shared values and historic allyhood. He established solidarity of victimhood: two nations with parallel values, united under attack.

While both Hollande and Obama have remained cool, stating neutral outlines of ISIS’ purpose, they have mimicked Rubio’s appeals, as well as those often made by ethnic nationalists. Even before the rise of the National Front, Nicolas Sarkozy’s party, the Union for a Popular Movement, had wooed voters with ethnic nationalist appeals for years, claiming that French natives were becoming victims of “anti-French racism.” One of France’s most notorious ethnic nationalists, thinker and writer Eric Zemmour, argues that France is suffering from the same problem that befell the Roman Empire: an inability to assimiliate “barbarian peoples” into its way of life.

While historically France has been more concerned with a breakdown of its collective self-identity, and the United States with its homeland security, re-igniting appeals to a “threat on values” narrative is equally dangerous in both nations. Even if it is specified that, in the case of exported terrorism, the threat is posed by ISIS, not the Muslim world, the rhetoric gathers predominantly non-Muslim, like-minded Western nations under one threat. From these distinctions, a tacit association of Muslim regions can be easily made. Since this logic excludes them from the gathering of value-linked, Western nations united under threat, Muslim peoples are lopped into the Othered category. This “threat against us” appeal, which has been emphasized across the political spectrum, from incumbent and campaign podiums alike, functions the same way as the “clash of civilizations” narrative. Paired with frequent use of a term like “barbaric,” one that cannot escape its historic racialization, this manichean thinking encourages a logic so heated and simplistic that it creates a large Other, overriding the heterogeneity of Islam. In other words, since the West lays claim to civilization in the “clash of civilizations” schema, Muslim peoples are grouped into the Islamic Civilization category (of course, a problematic move) thus classified as “anti-Civilization,” or barbaric. All Muslims are rendered guilty for their immersion in a culture that, even if not itself ‘barbaric,’ has the potential to produce barbarism.

Even if the association is unintended or unconscious, the Muslim world in its entirety is interpellated as the antagonist. This result, as many have noted, is exactly what ISIS anticipates when it designs attacks. In their mission statements, ISIS claims to speak for the entire Muslim population. The more people in Western nations alienate Muslims, the more it confirms ISIS’ narrative of the world.

Obama has been conscientious of the ways Americans unwittingly play into ISIS’ rhetorical strategies so long as it concerns his opponents. Recently, he claimed that he couldn’t think of “a more potent recruitment tool for ISIL than some of the rhetoric coming out of here [America] in the course of this debate,” referring to conservative backlash regarding the admittance of Syrian refugees. Yet statements in which Obama explicitly discourages associations between mainstream Islam and ISIS may be as ineffective at not alienating Muslims. Qualifiers already suffer relative to salient messages. But when qualifiers make an association in order to denounce it, the association lingers. These statements can work like an apophasis: “a rhetorical device wherein a speaker or writer brings up a subject by either denying it, or denying that it should be brought up.” Recently, Trump used an apophasis to discredit Carly Fiorina’s business experiences, telling a New Hampshire rally audience, “I promised I would not say that she ran Hewlett-Packard into the ground.” An apophasis appears when a speaker intentionally makes an orphaned point, one that transmits a message the speaker is purportedly disowning or disavowing. When receptivity is low, listeners or readers could accidentally interpret a point that is being genuinely dismissed like they would interpret an apophasis. The association will register in the audience’s subconscious.

In February, Obama told the Summit on Countering Violent Extremism, “we are not at war with Islam, we are at war with people who have perverted Islam.” Those versed in Ironic Process Theory might say that Obama is playing a losing game. The notion, developed by psychologist Daniel Wegner, describes how “attempts to suppress certain thoughts make them more likely to surface.” Most commonly, the theory is raised in reference to a situation where y tells x or x tells him or herself not to think of z. The theory suggests that, invariably, x will think of z. Consequently, when a speaker seeks to address a misconception, addressing the misconception may make the misconception more likely to persist given that thought suppression often leads to the intensification of the thoughts it seeks to suppress. Needless to say, thought suppression is no less tricky for an individual psyche than it is for an entire nation.

The mischaracterization of Muslims is so prevalent that its logic may reproduce itself even when its foundational assumptions are being counteracted. It seems that, any time a conflict-of-values conversation follows events like the violence that befell Paris last month, it cannot help but activate the persecutory logic that haunts these sorts of conversations and, more somberly, the national psyches of both France and the United States. Navigating unintended associations is difficult. But if Obama and Hollande fail to avoid the pitfalls dug by their forebearers, they will, at best, be authoring another problematic historical chapter. At worst, they will be authorizing the multidirectional violence that this logic gives rise to.

Henry Staley B’16 failed to suppress his thoughts on the matter.