A Day in the Life

The Quantified Self and the Stream of Consciousness 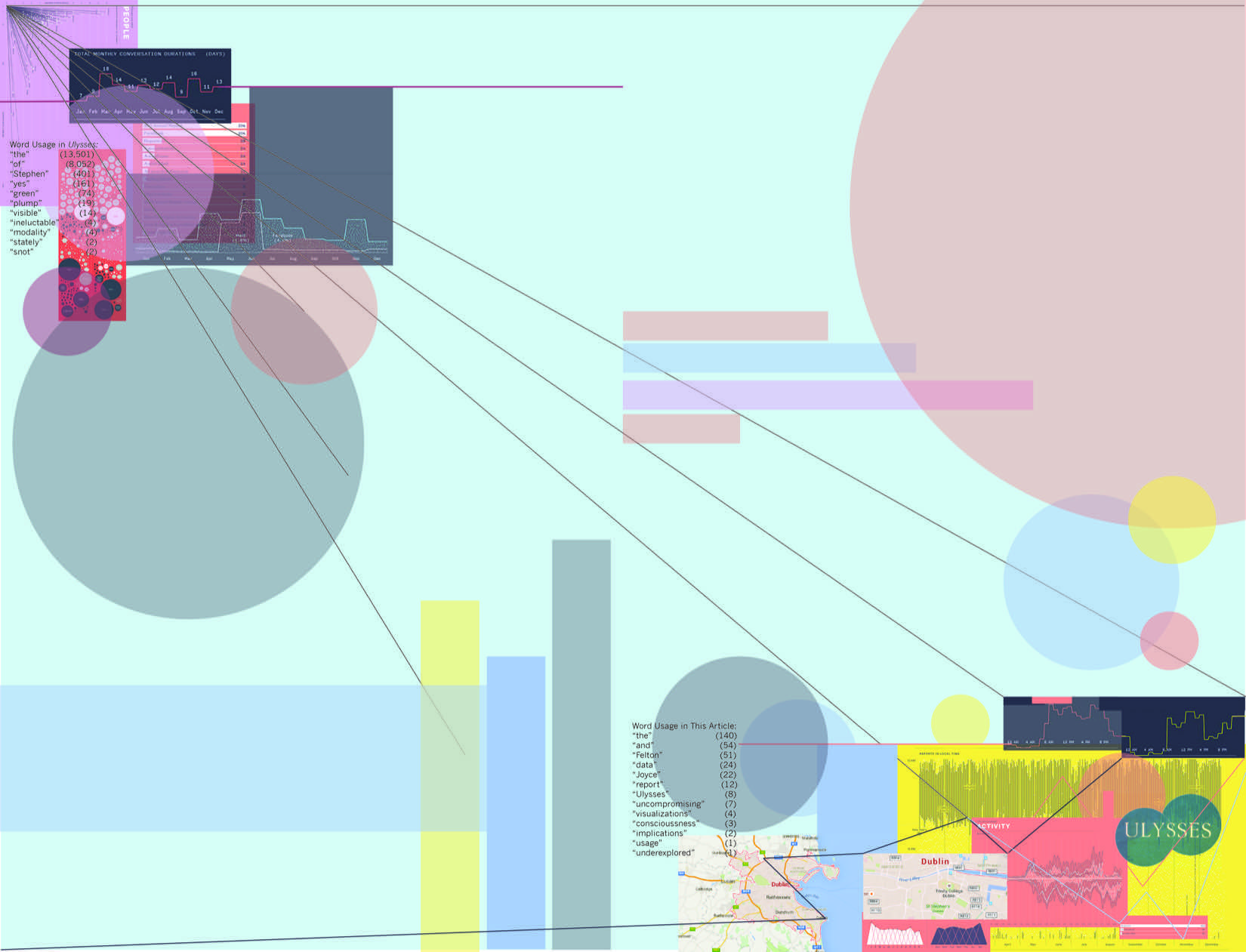 When Nicholas Felton lectured at RISD last month, he wasn’t giving the typical alumni success speech. The 1999 graduate was introduced with a videotaped interview that centered not on his career, but his daily inclinations—the first question asked whether Felton was obsessive compulsive.

Not that Felton isn’t wildly successful. He is an eminent information designer, the brain behind the Facebook timeline and the recent wave of beautiful infographics in the New York Times. He’s been profiled in Vice, Wired, and the Wall Street Journal. Yet Felton’s most fascinating work, the work he is so often interviewed about, has little to do with the prestigious media companies that consistently contract him as a designer. Felton’s life project to date has been a personal one: visualizations of an incredibly meticulous dataset he’s been keeping on himself for the last 15 years. How many drinks he had in the past month, the structure of his sleep schedule, the number of hours he’s spent away from his girlfriend, Olga.

Between 2005 and 2014, Felton compiled and published this data on his website in the Feltron Annual Report, Feltron being his nickname in college. He claims that inspiration for the nickname came not from his curt manner of speech nor his taste in futuristic eyewear, but from the computer he owned in college. The Feltron Annual Report was at its core an attempt to understand where all of Felton’s time went. Felton collected a wide swath of personal data about what he ate, who he spent time with, where he walked, how much he worked. He maintains that the data has not been edited or censored. He writes on his website, “I don’t guestimate because I have an honest curiosity about the outcomes. Once my confidence in a number slips, its inaccuracy bothers me and I won’t publish it.”

On the whole, the findings of the reports are both mundane and remarkable. It’s an extraordinary feat to compellingly and comprehensively document the ordinary, an achievement of Joycean ambitions.

The plot of Ulysses, James Joyce’s 1922 magnum opus, appears to unfold precisely as you read it, even though the book took Joyce eight years to write. Felton waits until December to calculate “An Average Day,” and thus does the opposite—he represents a truly continuous stream as a retrospective in compressed statistics.

In the earliest reports, Felton’s metrics are cruder, composed only of data he could record in a notebook or find on his computer: restaurants visited, songs played on iTunes, books read. The data are expressed more in value judgments than calculations: “Best Meal of 2005,” “Favorite Refreshment,” “Best Fiction.”

In later reports, as the data gets more comprehensive and the statistics get more precise, a meta-recursive element emerges. In the 2007 Annual Report, for instance, Felton begins measuring how many annual report measurements he takes a day. Grabbing a notebook, finding the right page and recording a data point might only take a minute, but the minutes add up if you’re stopping 20.6 times a day.

Cue the millenial adage—there’s an app for that. Felton and some of his friends designed it so that users can record their lives in the same way. Reporter, available in the App Store for $3.99, is a personal data surveyor designed to prevent the recording of Felton’s life from interfering with the actual living of it. Reporter works by asking its owner a short list of questions at random moments throughout the day. In his lecture at RISD, Felton said he fills out about 11 surveys a day. Reporter’s website states that the app “has been refined to capture the most information with the lowest friction.”

Eventually, Felton wanted to go deeper, past the level of data he could record manually in notebooks and micro-surveys. He bought a FitBit that counts how many steps he takes. He began to wear a Nike Fuelband and a Basis watch, which estimate health metrics like calorie burning and heart rate. He installed a sensor in his car that tracks where he goes and records his gas mileage. He’s experimenting with a breathalyzer.

By 2012, Felton’s data visualizations reached a new level. Past reports featured pie charts, bar graphs, scatter plots, everyday Microsoft Wizard sorcery. His later efforts reveal more about the quotidian. One graphic shows his year represented in emails—each day is represented as a line, with a dot noting each moment he sent and received an email. Outside from his remarkably consistent sleeping hours, his life is a cloud of these dots.

Another striking visual features a chart of what activity Felton is doing at a given time of day. On the y-axis are plotted the results of his Reporter app, which ostensibly asks him, “what are you doing?” many times a day. The chart’s x-axis is time. We pick a given hour and see what the relative probability of Felton doing a certain activity is. Reading is his most popular activity at 10 PM. At 6 PM, he’s probably talking.

In 2013, Felton dove into conversational data. He crunched the text in his SMS messages, his Facebook inbox, his email, his snail mail. He took surveys after telephone calls and real conversations that record subjects he discussed, words he remembers saying. The 2013 report features visualizations of every geographic region he had a conversation in (39), every location he discussed (3,326), every word he sent in an email (6,904,901).

In a New York Times video feature, Felton said, “All this data represents a part of your identity that’s being traded, or manipulated, or in some cases, used against you. And so knowing who has this data, and what’s being done with it, is really important.” By analyzing his metadata, Felton is essentially spying on himself.

Viewed collectively, the Feltron Annual Report is a work that dissects a life, day-by-day, as honestly and meticulously as possible. Year after year, Felton eats at the same proportion of Japanese restaurants. He never really gets a respectable running routine together. The postcard debt his friends owe him never balances. Quantifying a life can tell one a lot of things they don’t want to know, shattering certain self-conceptions.

Joyce’s gargantuan rendering of a day tells us something similar, albeit from an opposite approach. Felton’s metrics are objective; no matter how important a day feels, it can be chopped into data points. Joyce’s writing, on the other hand, was groundbreakingly subjective. He turned an average day into a literary masterpiece. But if each day can be recorded as a compelling thousand-page epic, is any day really more important than the last?

Felton told an interviewer from Wired that “what keeps them [the data] fresh is that I am driven by curiosity about unexplored aspects of my behavior.” Yet, oddly, he has hardly discussed this curiosity. Like much of the Big Data movement or other developments in tech that quantify and record everyday information, the implications and intellectual ambitions of Felton’s project have largely gone unexplored. Felton’s project, however, places him in dialogue with writers, a handful of whom have tried to discover and scrutinize the significance of the ordinary, the prosaic, the everyday. An answer to these matters was perhaps best approached by James Joyce, who, responding to the major ‘life story’ projects of contemporaries like Marcel Proust, chose to contain Ulysses within the twenty-four hours of its protagonists, Dedalus and Bloom.

Joyce and Bloom share Felton’s affinity for listing everyday details. In Ulysses, Joyce indexes what Bloom eats, what he likes to eat, the clothes in his drawers, the objects he sees, sensations he feels, people he remembers and the amount of money he spends throughout the day. This encyclopedia of a day exhausts much of the text in the earlier Bloom portions, leaving the reader to infer or draw narratives out of non-events. Because the lists include so much of such trivial details, Joyce is, like Felton, uncovering “unexplored aspects” of everyday life and behavior.

But to what advantage? What does Joyce provide where Felton omits? Representing everyday experience is something we are all asked to do when the question “what did you do today?” is posed. Unlike Joyce and Felton, our instinct is to prioritize events that portray our day as normal, maybe productive, maybe even funny or entertaining. We might look for highlights so as to privilege the out-of-the-ordinary above the ordinary (in a sense, we are doing for a day what Felton has done for Facebook users’ lives as the architect of the timeline feature, essentially a greatest hits reel of users’ lives and a move that defies the everydayness of his personal data collection project). For the most part, novelists do the same, selecting moments of epiphany, extraordinary or high-stakes episodes that advance a plotline.

Resisting this tradition, Joyce and Felton create documents that are non-hierarchical, seeking to de-privilege specific details or events, preventing them from obscuring the larger constellation of data—one without contradictions and delusions because the asterism has yet to be sketched in. Many believe that this is the triumph of Ulysses: its exhaustive list of details, as Lisel Olson says in Modernism and the Ordinary, provides a sense of “life as stranger than novels make it out to be, of the ordinary as more varied and random than any literary account of it.”

Joyce realized that the ordinary is strange, that elements of it are often embarrassing, unflattering, and unwelcome but, most of all, significant. He sought to take a page out of Ibsen, who, as Joyce claimed, was the writer who had most successfully depicted “average lives in their uncompromising truth.” Joyce believed that commitment to these truths is vital and urgent: contemplating the ordinary in a form that best exposes its ignored or censured aspects forces one to probe the fantasies they live under. For Joyce, emphasis on the truths of the commonplace was integral to his mission to draw the Irish out from under the delusions levied on them by Roman Catholicism. Sex, doubt, infidelity, bowel movements, vice and menstruation are all elements of the ordinary that the Church asks its disciples to shun.

Likewise, we may want to look away from our transgressions—excessive computer or smartphone usage, alcohol consumption, non-productivity, reluctance to explore outside of the same handful of Japanese restaurants, debt. But it is the uncompromising truths, the facts and figures of the ordinary, that allow us to see where myth is snubbing us.