The Life and Times of Marie Laveau 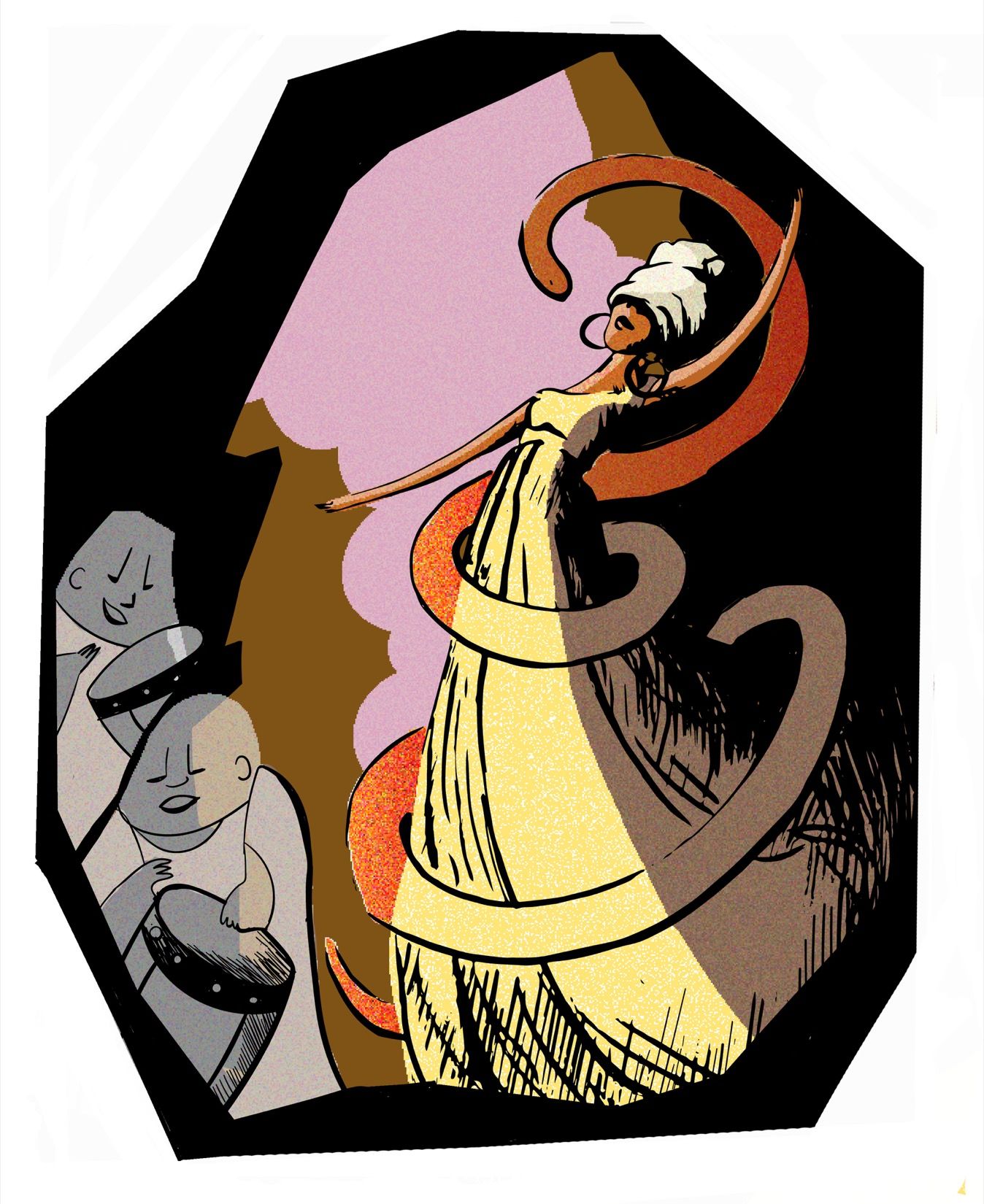 Marie Laveau was born a free Creole woman in New Orleans on September 10, 1801. She lived in a quaint house on St. Ann Street, in the French Quarter, her whole life. It was in this dwelling that lawyers, merchants, and politicians received her personal consultations. Her divinations were grounded in both her spiritual education and information she acquired from a network of accomplices who worked as slaves in elite households. The precision of her predictions, her training under the famous Voodoo Doctor Jean Montaigne, and her high societal position as a freed black woman won her the respect of the Voodoo community, who named her the first Voodoo Queen.

Laveau’s obituary in the New York Times, published the week of her death in 1881, describes her hold on the New Orleans Voodoo community: “besides knowing the secret healing qualities of various herbs which grew in abundance in the woods...her advice was valuable and her penetration remarkable.” The obituary depicts Laveau as a compassionate woman of “warm heart and tender nature” who “never refused summons from the suffering,” praying beside the beds of people stricken with yellow fever and cholera. However, prefacing the stories of Laveau’s altruism and intelligence, a disclaimer reads “to the superstitious Creoles, Marie appeared as a dealer in the black arts and a person to be dreaded and avoided.” The New York Times obituary is one of the only written records of Laveau’s mysterious life, providing limited insight into conflicting portrayals of Laveau as a benevolent saint and a manipulator of supposed ‘black magic.’ People both inside and outside the Voodoo community have leveraged Laveau’s murky identity, assuming rights over what remains of her story, and often embellishing the rest. The question remains, who, if anyone, has license to Voodoo’s most prized priestess?

Many Hollywood films have taken their own liberties with Marie Laveau’s life, casting her as the perfect villainess. In Mirrors, a 1978 horror film directed by Noel Black, a couple’s honeymoon in New Orleans turns dark when the wife, Marianne, is cursed by Marie Laveau. The Voodoo Queen plagues Marianne with bloody nightmares that begin to come true. More recently, the third season of the television series American Horror Story has taken advantage of the mists of ambiguity surrounding Marie Laveau, turning her into a beautiful, blood-spilling witch. Set in Louisiana in 2013, Angela Basset plays Marie Laveau, who seeks revenge on the descendants of Salem witches residing in New Orleans. In the plot, Laveau makes a murderous pact with Papa Legba, god of the crossroads where heave and earth meet, who is misrepresented by the show as the Devil. Creators of American Horror Story, Ryan Murphy and Brad Falchuk, opted to turn the Voodoo Queen into a tormentor, having her sacrifice babies and murder the innocent. In one scene, Laveau conducts a fertility ritual in which she boils a man’s semen and pours goat’s blood on his wife’s vagina while half-naked dancers circle the room. No records of Laveau performing this ritual exist, and the use of semen and goat’s blood isn’t cited in any documented Voodoo rituals. Turning an esteemed Voodoo figure into a manipulative criminal not only transforms Laveau’s legacy, but fetishizes the religion of Voodoo. Hollywood propagates a plethora of misconceptions of Voodoo, portraying it as a religion of black magic, depicting Voodoo practitioners as digging up graves, sacrificing children, and poking pins in dolls that cause faraway enemies to wither in pain.

Even some Voodoo practitioners package these fabricated Hollywood stereotypes, like Marie Laveau’s alleged dark powers, and sell them to an unknowing audience. Marie Laveau’s House of Voodoo, located on Bourbon Street in the historic French Quarter of New Orleans is one such place. One can purchase Marie Laveau’s “authentic voodoo doll” for $8.95, her love and passion spell kit for $24.95, or her spirit offering bag, “to be a catalyst for spiritual evolution and social progress” for $29.95. Ezrulie’s Voodoo Store, named after the Voodoo goddess of love and passion, is another shop that takes advantage of Laveau’s seductive public image. Located on Royal Street, Ezrulie’s offers “Marie Laveau Love Spells” to “draw passion into your life” by summoning the Voodoo Queen whose “love spells are infallible.”  F. & F. Botanica, located in the Treme neighborhood of New Orleans, is a tourist hotbed that sells everything from court-case spell kits to sweet-smelling oils that serve as offerings to Marie Laveau. They pride themselves on creating an “authentic Voodoo experience” for their customers. Maretza Murillo, the store manager, explains the motivation behind purchasing some of their products. Picking a black break-up candle with a snake emblem on it, she says, “if your husband is messing around with somebody else, and you want to break that relationship up, you light this candle, say their names, and it should help.”

Some practitioners within the Voodoo community aren’t supportive of the commodification of the religion. Voodoo Priestess Ava Kay Jones, who leads Voodoo rituals in her home in New Orleans and has devoted her life to educating the public on the Voodoo religion, says in the documentary Voodoo From the Inside, “when you go into these so-called Voodoo shops, you will find all sorts of paraphernalia, some of these things are obviously meant as jokes.” She cites break-up candles and win-the-lottery mojo bags as examples, saying that the “discerning person can tell what is actually meant as a spiritual aid and what is a lark.” Brandi Kelley, director of the Historic Voodoo Museum in New Orleans, comments in the documentary that since “evil sells and Satan sells,” the practitioners embracing Voodoo fallacies and exaggerations take “advantage of the misinformed public image of this religion” and profit from it.

While Hollywood has pounced on Laveau’s allure as a mysterious enchantress, and some Voodoo followers have embraced this appeal and packaged her for consumption, there are many Voodoo practitioners who evoke her spirit daily, worshipping her as a Loa, or Voodoo spirit force. Priestess Miriam Chamani, owner of a Voodoo shop in New Orleans that houses many portraits of Laveau, believes “Voodoo is about finding ways to survive conflict and trouble,” and “as long as you’re doing the work of helping people get through difficult times, you’re doing the work that Marie Laveau was all about.” On St. John’s Eve, the evening before the feast of St. John the Baptist on June 24, a few hundred Voodoo practitioners gather on Magnolia Bridge over Bayou St. John, where Laveau held many extravagant ceremonies between the 1830s and 1870s. There, they engage in an annual head-washing ceremony, commemorating and honoring Marie Laveau. They dress in all white, adorned with Laveau’s trademark white headscarf, and bring offerings of hair ribbons, blue and white candles, and oils for the Voodoo Queen. These Voodoo practitioners call on Laveau to uplift and enhance their spiritual practice. Sallie Ann Glassman, Voodoo Priestess who leads the head-washing ceremonies on Magnolia Bridge, says “we honor Marie Laveau and her spirit 150 years after her death. She is still very active in New Orleans and people still go to her for help, healing, and empowerment.”

It is these practicing Voodooists who struggle to preserve the Marie Laveau described in the New York Times obituary, the patron saint of Voodoo who led many followers to powerful, spiritual awakening. Laveau’s ability to transcend paradigms and appeal to people outside the Voodoo religion has left devout practitioners grasping tighter on their Queen. Angela Basset, when talking with Summer TV Tour about playing Laveau in American Horror Story, said, “the writers have room to just create whatever out of their imaginations. I get a chance to play also.” It is this view of Marie Laveau—as an outline of a woman to be colored in however one wishes— that causes practitioners to wince. Laveau’s rise in popularity has Voodoo practitioners speaking out against the distorted representations across media and within New Orleans. Voodoo Priestess Severina KarunaMayi Singh writes on her website, Voodoo Crossroads, “In Voodoo, the word “Queen” is used to denote respect and honor for one who was a great priestess and of immeasurable service to her community,” and Singh notes that today, “few understand how to continue to serve her so her blessings may be brought forth.” The ardent practitioners encourage the public, Hollywood, and Voodooists commodifying Laveau to study her positive historical and spiritual impact before casting her in a movie, selling Laveau love oils, or calling on her in prayer ceremonies.

Today, Laveau’s grave remains a site of pilgrimage for Voodooists, and a popular tourist attraction; with a whopping number of visitors only surpassed in the US by the grave of Elvis Presley. Plot 347 in St. Louis Cemetery in New Orleans is splattered with Xs, for it is said that if you draw three Xs, spin three times, and knock three times on her grave, Laveau will answer your deepest prayer. Martha Ward, Professor of Anthropology at the University of New Orleans, who has written a book about Laveau, explains, “Marie Laveau rules the imagination of this city. People think about her, see her, have visions of her, dream about her, talk to her. I know because these people are showing up at my doorstep almost every day.” It may be the plethora of incredible legends surrounding Marie Laveau, and the inability to determine fact from fiction that entices both practitioners and outsiders. One is left with two memories of the Voodoo Queen: the falsified version that finds form in movies, perfumes, and dolls, and the true Queen, whose reign continues, kept painstakingly alive by the practitioners who recall her spirit daily.

EVE ZELICKSON B’19 is a catalyst for spiritual evolution