Just Say No to Bad Art

On Protest and Renoir 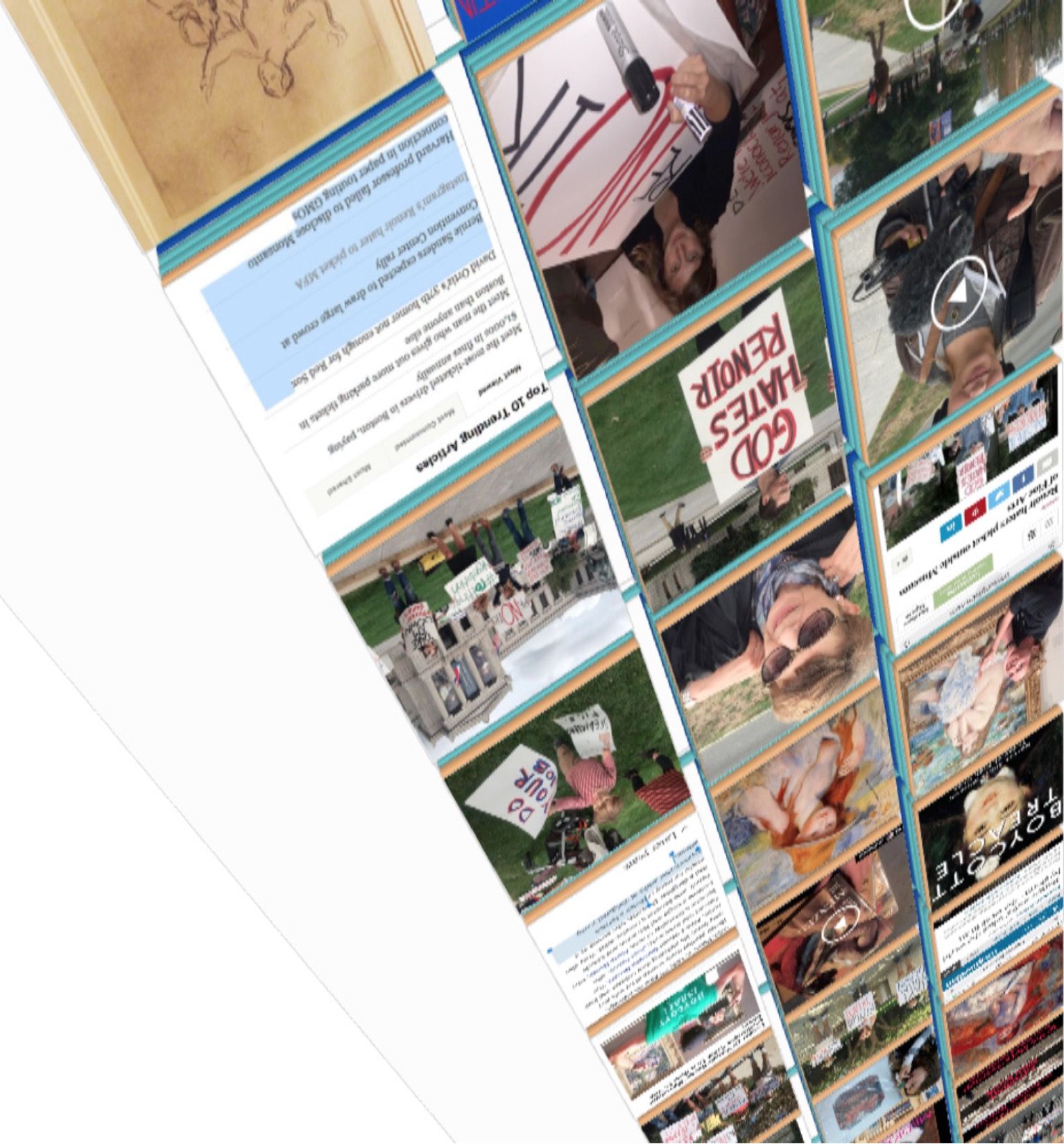 Over the course of these past months, protesters have gathered outside of various cultural institutions including the Boston Museum of Fine Arts, New York’s Metropolitan Museum of Art, and the Art Institute of Chicago, demanding the removal of paintings by French impressionist, Pierre-Auguste Renoir. These crowds, largely comprised of graduate students in various art history programs, toted signs reading: “God Hates Renoir,” “Renoir is Aesthetic Terrorism,” and “There is No Renoir.” The group’s leader—political activist and prankster Max Geller—also runs the now-popular Instagram page, renoir_sucks_at_painting, where he regularly espouses the belief that the works of Renoir are “irredeemable treacle.” In Renoir’s place, Geller and others argue, should be hung the works of other 19th century French artists; here the group has taken a particular liking to the work of Paul Gauguin. Though Geller’s gatherings themselves rarely host more than a few dozen attendees, his followers on social media number in the thousands. Apart from a single incident at the Norton Simon Museum in Pasadena, California, neither museum security guards nor the police have thus far shut down the protests.

The simplest, most conservative reactions dismiss Renoir Sucks at Painting (RSAP) because it threatens a supposedly endangered Western canon, and humiliates the time-tested authority of art scholars and professionals who inducted Renoir long ago. Jonathan Jones, art critic for The Guardian, penned an entertainingly pedantic defense of Renoir entitled “To all you Renoir haters: he does not ‘suck at painting,’” in which he unironically calls RSAP a group of “daft philistines.” In a memorable Instagram exchange, the great-great-granddaughter of Pierre-Auguste, Genevieve Renoir (@gegereno), goes so far as to argue that the ‘protestors’ are trying to effectively undermine the divine edict of the market. “When your great-great-grandfather paints anything worth $78.1 million (which is $143.9 million today), then you can criticize,” she writes in a comment on one of RSAP’s photos. “In the meantime, it is safe to say that the free market has spoken and Renoir did NOT suck at painting.” (Geller shot back with a list of decidedly sucky things the “free market” has also validated, including “the Prison Industrial Complex; Slavery; Settler Colonialism; The destruction of sea otter habitats,” and “National Treasure 2: Book of Secrets.”)

One might more reasonably argue that the issue has nothing to do with a threat to the canon. Never mind the continuity of Eurocentric cultural dominance; in this day and age, what would it even mean, practically, to remove a painter from the canon? We know that institutions of power are no longer able to proceed by way of simple erasure—for one thing, the mass reproducibility and now digitizability of artwork have multiplied the storage centers of cultural memory. Sudden, calculated de-canonization, if it occurs at all, is governed by more shadowy, spectral logics. Forgetting happens as a function of market contingencies, or in the shape of gradual, imperceptible shifts. Meanwhile, museums and cultural institutions around the world are updating conservation practices and expanding their domains at an unprecedented rate, and often at a high human cost. Museum developments in the Persian Gulf region, for instance, have been recently undertaken by the Guggenheim Foundation and the Louvre, exploiting inhuman labor laws and massive amounts of migrant labor in the process. If anything is political in art today, it’s this accelerated, large-scale, multinational reproduction of the Western museum and its canon.

No, the ‘protests’ aren’t problematic because they threaten the Western canon; they’re problematic because they depoliticize both the Western canon and the act of protest at the same time. Political signifiers and protest tactics are ripped from their contexts and redeployed as parodic elements in an elaborate aestheticization of politics. What on the face of things appears as a war on “treacly” bourgeois art is quite clearly being waged on the bourgeoisie’s own terms: a purely aesthetic grounds from which any determinate political stakes have been intentionally evacuated and replaced with rhetoric resembling conservative accusations of ‘degeneracy.’ “We can talk about more pressing social issues but I do believe removing Renoir is just the first step in the long march to our cultural enlightenment,” says Geller in an interview with Dazed.

Of course, the RSAP ‘project,’ if it can be called that, is so couched in this sort of irony to make any such critical response seem ridiculous. Simply put, Geller is trolling, performing a joke whose absent ‘stakes’ and shifting positionality make any ‘position’ at all completely untenable. Everything is in quotation marks. From this perspective Geller appears to be merely imitating extant bankrupt, dissimulated forms of politics, or what could be called apolitics—incessant, unthinking mantras, facile or knee-jerk indignance, political ‘positions’ articulated from the side of power, and not from the side of the disenfranchised. The apolitics of viral fundamentalists like the Westboro Baptist Church, for instance, are a crystallization of what Geller calls “American absolutism”—“the sort of cocksureness that you see in political debates in my country.” So RSAP’s simulation of apolitics includes Westboro-esque signs like “God Hates Renoir,” alongside popular American conspiracy-theory shoutouts like “Renoir was an Inside Job.” Whatever intelligence this imitative tactic might have is obliterated when Geller, in character, returns to his main ‘thesis’: that Renoir really “just sucks at painting.” This is a thesis self-conscious of its own willful stupidity. Meanwhile RSAP revels, as only a cynic can, in the embarrassing ineffectuality of all opposition.

As an addendum, it should be noted that Max Geller has been a part of important and controversial political activism. Prior to RSAP, Geller was relatively well-known as a leading member of Students for Justice in Palestine (SJP) at Northeastern University, a chapter of the national SJP organization which became notable in 2014 after it was suspended for distributing mock eviction notices to student residences during Israeli apartheid week. Granted, there’s simulation and a certain spectacularization operative in both the Northeastern SJP’s work and in the Renoir ‘actions,’ as well as a disturbing dissonance that arises when the two are juxtaposed. But one must make a distinction here between the trajectories of art and politics. To mistake RSAP for politics would be fatal.

In the early 1960s, avant-garde musician and philosopher, Henry Flynt, could be found outside of New York’s MoMA or Lincoln Center, picket in hand, chanting “down with art!” and “demolish serious culture!” In Flynt’s writings at the time, he expanded these mantras, declaring art a sort of “cultural imperialism” that is “surrounded by the stifling cultural mentality of the social-climbing snobs.” Flynt’s protests were intended as direct action against precisely this establishment, this “serious culture” of art. In addition to calling for the physical destruction of various museums and concert halls, Flynt also proposed another, perhaps even more quixotic solution to this problematic institution called art, proclaiming that “the first cultural task of radical intellectuals...is: not to produce more Art (there is too much already).”

As drastic as these demands were, they were by no means exceptional at the time. Conceptual artist and photographer, Douglas Huebler, echoed a similar ethos with his remark that, “the world is full of objects” to which he “[didn’t] wish to add any more.” Huebler’s artistic practice instead would center around indeterminacy and appropriation—often allowing others’ work and writing to function as a vehicle for his own ideas; Huelber’s Variable Piece 4—a book in which he reprinted secrets gathered from visitors at the Jewish Museum in New York—serves as a prime example. A few years after Flynt’s protests, Huebler’s work would be shown alongside other, similarly motivated Conceptual artists at Seth Siegelaub’s New York gallery. Much like Huebler and Flynt, Siegelaub was interested in doing away with the art object as such, preferring to show work which prized the idea behind an object rather than the object itself. In one of Siegelaub’s most famous exhibitions, titled “January 5-31, 1969,” the only work “on display,” apart from an exhibition catalogue, was Robert Barry’s 88mc Carrier Wave (FM). The piece, consisting simply of two radio waves, though present, was both formally unstable and wholly imperceptible to gallery visitors. These artistic and curatorial gestures purposefully protested the traditional practices of collection and accumulation.

And yet, what perhaps separates Flynt’s protests from the practices and writings of Siegelaub and Huebler is that Flynt sought to operate decidedly outside of the gallery space and the accompanying logic of the New York ‘art world.’ That is, while Siegelaub, Huebler, Barry, and others working in Conceptualism shared in Flynt’s disdain for the limitations of art and its institutions, they chose to pursue these very same criticisms through the arts, seeking to develop a practice that could at once critique and succeed. Hoping that their blank gallery spaces and dematerialized objects might undermine the art market’s ability to possess the products of their labor, Conceptual artists failed to realize that what they were doing was actually clearing the way for an even more exploitative market—no longer dependent on specific art objects—that could endow any artistic gesture, from an exhibition catalogue to a press release to a sketchbook, with outsized value. For reference, original copies of Siegelaub’s exhibition catalogue for the above mentioned “January 5-31, 1969” now sell for hundreds, if not thousands, of dollars. Flynt, on the other hand, never seemed to concern himself with any ‘art world,’ instead choosing to abandon the gallery space and any group that would have him as a member—often commenting on his disinterest in the Fluxus and neo-Dada movements, which were often said to share Flynt’s sensibility. Before too long, Flynt began to fear that even his protests might be cast as some sort of performance piece. He ultimately abandoned them and chose instead to pursue philosophy and ethnomusicology.

Yet even now, as Flynt experiences something of a revival—having his limited work shown at various galleries and biennials—it remains unclear whether one can truly escape from the pervasive logic and economies of the art world, no matter how much one protests. If this is indeed the case, one possible answer may rest in the work of artists such as Adam Pendleton, who has scrawled “Black Lives Matter” across his most recent canvases: an overt gesture which at once acknowledges the inevitable circulation and fetishization present in the art market, and yet uses these very traits to distribute and transpose a potent political message. In a way, Pendleton’s work, by no longer attempting an exit from the arts and its economies, does far more than Siegelaub’s empty galleries or Flynt’s dramatic signs in showing how difficult this sort exit might be.