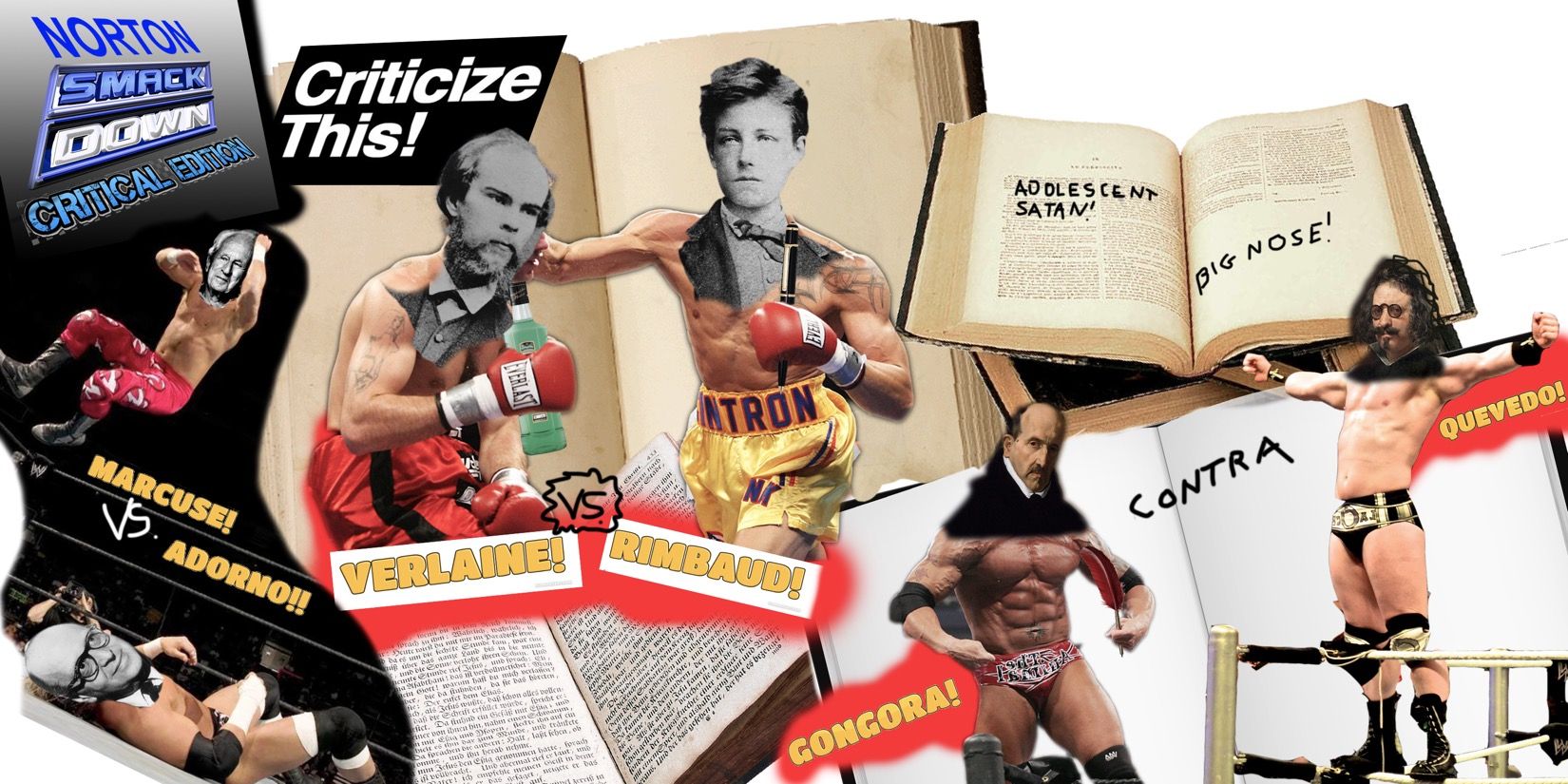 The Spanish Baroque poet Francisco de Quevedo clanked rapiers with lyric poet Luis de Góngora on the page, sparring over the use of wordplay, neologisms, syntax, and grammar. Style, for each poet, was a personal matter—both wrote pieces devoted to the other’s awfulness, but rarely with any explicit mention of names. In his prose and poetry, Quevedo accused Góngora of being a sodomite (a capital crime in the 17th century), an unworthy priest, and a writer of indecent verse with intentionally obscure language. This last criticism, of Góngora’s obscurantism, was certainly the most substantiated. Despite his mastery of the Spanish language—he was known as the ‘Spanish Homer’—Góngora was quite the embellisher, a quality for which Quevedo and co. lampooned him, believing it produced grandiose, stilted poetry. Poetry qua nonsense.

Most of Góngora’s opponents were rebelling against his ‘new poetry,’ which was ostensibly more difficult than his earlier work. The style in which these poems were written came to be known as culteranismo, or Góngorismo, a type of writing marked by its extremities: overly complex syntax, heavy use of metaphor, ostentatious vocabulary, and general prolixity. For example, Góngora would write, “Era del año la estación florida” (“It was the flowery season of the year”) instead of simply writing, “It was spring.” A portmanteau of the words culto (cultivated) and “Luteranismo” (Lutheranism), the term culteranismo was meant to indicate Góngora’s poetry, and others like it, as heretical to ‘true poetry.’ Indeed, Quevedo thought the poetry had a corrosive effect, contributing to Spain’s moral, political, and cultural depravity. It’s worth mentioning that when he was alive, Góngora was by no means passive to this criticism. He responded vehemently to attacks on his style, declaring that he sought to raise Spanish to the perfection of Latin, that he did not write for idiots, and that difficult poetry could sharpen his readers’ intellects.

Scholars have traced examples of attacks and defenses of Góngora’s poetry to as early as 1613, but the most salient criticism didn’t occur until the years around his death, in 1627. In 1629, for example, Quevedo penned a dedicatory essay, addressed to his friend Olivares, in which he extolled the poetry of Fray Luis. Along with other polemical points, the essay contained a kind of archive—a series of quotations—of what Quevedo considered good style. Citing passages from ancient and modern thinkers such as Socrates, Aristotle, Erasmus, and Quintilian, Quevedo argued for, as one source elegantly puts it, “decorous clarity as opposed to the pleasure in deliberate obscurity.” The essay was a veiled attack at Góngora and his followers; for Quevedo, writing was principally about moral instruction, a feature he thought was essentially lost in culteranismo, with its swirling arabesques and purple language.

Quevedo also responded with his own style of poetry, conceptismo (‘concept’ being the 17th century Spanish word for ‘conceit’). This style eschewed syntactical complexity for simple, witty, and direct lyricism, with quick rhythm and frequent use of puns. It was, however, still Baroque, so it reads today as being relatively ornate. The funniest of his poems, and by the far the one most pointed at Góngora, was a satirical sonnet he wrote titled “A un Hombre de Gran Nariz” (“To a Man with a Big Nose”). The sonnet is a complex series of puns and hyperboles, in which Quevedo’s concepto (what he systematically exploits throughout the poem) is Góngora’s nose. One hilarious stanza: “He was an ominous nasal missile; / A pyramid, a colossal nipple, / Alas, of nostrils he was the twelve tribes.”

Although culteranismo and conceptismo both emerged as the seminal literary styles of the Spanish Baroque period, it is said that Góngora and Quevedo’s personal rivalry ended when, in an attempt to uproot Góngora (who was facing debt issues), Quevedo purchased his house, in Madrid. Historians are uncertain whether or not he removed the wallpaper. –YH

“Quel Monde!” is the abbreviation of the French phrase “dans quel monde vivons-nous?” loosely equivalent to the English expression “what is the world coming to?” Every era finds reason to ask this question, but it would seem an especially apt phrase to drop if the year were 1969. In August of that year, sociologist and philosopher Theodor Adorno would use it to punctuate the end of a letter to his friend, former colleague, and sometimes adversary, the philosopher and theorist Herbert Marcuse. It was the last phrase they shared, appearing in a letter Adorno’s secretary typed up as Adorno lay dying in the Swiss mountains.

The letter was the last in a contentious personal correspondence the two held over the student movement in Germany. Earlier that year, the Socialist German Student Union occupied a room at the Institute for Social Research, more commonly remembered as the Frankfurt School, the metonymic birthplace of Critical Theory. Students were dismayed with the Institute’s lack of action regarding the Vietnam War and the administration’s decision to shorten the study period. They began to camp out in rooms and disrupt lectures. That summer, Adorno, a professor at the Institute, had one of his lectures interrupted when three female students decided to approach his podium, shower him with rose peddles, and flash their breasts at him. During another related occupation, Adorno called the police, a decision that led to the arrest and seizure of 76 students. Commentators chided Adorno for not realizing that these activities were the consequences of his ideological suggestions. Adorno defended himself: “I proposed a theoretical model for thought. How could I suspect that people would want to realize it with Molotov cocktails?” He held that the occupations and disruptions were unjustified when directed at a liberal institution, examples of the movement’s degeneration into what he called ‘left fascism.’

Marcuse, who had left the Institute for California during the Second World War, told Adorno that his use of the term ‘left fascism’ was a “contradictio in adjecto” (a conceptual oxymoron) and was appalled that Adorno would intervene on any sort of praxis coming from students undeniably influenced by theory that the two of them developed together. He admitted that the movement felt like a patricidal gesture against their generation and would be inconsequential—not even “pre-revolutionary” at best. Yet Marcuse told his “Dear Teddie” that he was “inhuman” for choosing the armchair over the soapbox, the pen instead of the megaphone, when there was an ongoing opportunity to confront the brutalities of the War and police repression. Adorno felt that Marcuse’s defense of the students’ aggression evidenced that Marcuse had a “cold streak” in his heart. He questioned Marcuse’s intellectual rigor and commitment to dialectics. Aside from the exchange of aspersions, the letters exhausted ink reminiscing over the old days (the thirties) and planning for Marcuse to meet up with Adorno in Italy. Adorno warned that, if this meeting took place, Herbert would have to prepare himself to see a “badly damaged Teddie.” Adorno’s health was more damaged than even he knew, and Marcuse never made it to see him.

Critical Theory’s ambition was to combine different modes of thought in order to answer what the world was coming to. Marcuse died ten years after Adorno; the student movement died somewhere in between. Marcuse would have a decade on Adorno to try to answer “dans quel monde vivons-nous?” His conclusions likely felt less rewarding: dear Teddie, his comrade-in-dialectics (certainly not in-arms), was not around to contest him. –HS

More often than we’d admit, love and hate are two sides of the same coin. The French Symbolist poets Paul Verlaine and Arthur Rimbaud had a relationship so troubled and tumultuous that Bob Dylan, the master of failed love affairs, uses them as a point of comparison in a song on his 1975 breakup album Blood on the Tracks. Their first contact, in 1871, contained a hint of what was to come: a sixteen-year-old Rimbaud sent the decade-older, already famous Verlaine a few of his poems, and in return received a card from Paris with the words We await you; we desire you. Rimbaud, eager to be free of his provincial home, broke quickly into Verlaine’s social and literary milieu—and, inevitably, his personal life. The two poets spun wildly about each other for a few years, high off opium and absinthe and their own complicated passion. The climax of their relationship came in 1873, when, during a drunken dispute in a Brussels hotel room, Verlaine fired his revolver at Rimbaud. Though the gun went off three times, it struck Rimbaud only once, in the left wrist. The older poet was sent to prison and his lover, just 18, returned to his childhood home. They would only meet once more, just after Verlaine’s release two years later.

In the end, despite all efforts to the contrary, the dissolution of each man’s career was really self-imposed. Rimbaud quit poetry at the age of 20, having burnt himself out in four turbulent and luminous years. His departure from the Parisian literary world was so abrupt and absolute that many believed him to be dead. In reality, he had turned to other things—construction work in Cyprus, coffee exportation and arms trading in Ethiopia—and died, still young, at 37. He was always one to immerse himself suddenly and fully in something, and, after exhausting it, to move on just as quickly.

Verlaine outlived him, but only by a few years. After a descent into poverty and serious drug and alcohol addictions, he spent his last days in public housing, supported by the generosity of people who had admired and loved his work.

On the agony that had been their relationship, the two poets could at least agree. Verlaine, in a poem written from his Belgian jail cell, called Rimbaud an “adolescent Satan.” Rimbaud, who devoted an entire work—Une Saison en Enfer, or A Season in Hell—to the affair, wrote of himself from the imagined perspective of his lover: He is a demon, you know, he is not a man. –PF