On Zombies and Vampire Capitalism

Politically interested visitors to the Highgate Cemetery in North London will spy some great names on the headstones. Claudia Jones, Corin Redgrave, and Ralph Miliband are but a few of the world historical leftists resting alongside one another on the grounds—though Miliband isn’t even the most famous Marxist there. Well, Karl Marx is buried at Highgate. A morbid pinko’s fantasy, you might think, and you’d have been right until just recently, when socialists making the pilgrimage to revel in the master’s peaceful rest discovered that it costs £4 (about $6) to visit the sepulcher of the original critic of capitalism. Marx, for a small cash payment, rolls over in his overpriced grave for you. Obviously I need not point out the irony here—but ironic, yes, okay.

The Wall Street Journal said in a report this week that the election of Jeremy Corbyn as UK opposition leader has perhaps renewed interest in the gravesite, and the Friends of the Highgate Cemetery Trust are now facing complaints from the high-minded youth about the materially small but metaphorically large entry fee. The Journal, of course, used this as an occasion to remind readers that Marx’s lifestyle was pretty capitalist, that he pawned his wife’s jewelry or whatever, yada yada, but you, the reader, know this sort of petty mudslinging is of no interest here. In the spirit of Halloween, let’s talk about ghouls.

Consider a line from Capital, Vol. 1: “Capital is dead labor which, vampire-like, lives only by sucking living labor, and lives the more, the more labor it sucks.” We understand the metaphor, applied to the exploration of surplus labor—the capitalist is the vampire, the value generated by labor that laborers never see is the blood. Marx actually repeatedly uses the metaphor of the vampire in Capital to describe the exploitative efforts of the capitalist. It’s a 19th century Gothic thing—Marx was pre-Bram Stoker, but Romanticism was still in vogue at the time, and even Marx was susceptible to trends. Now, it would be foolish to say this graveyard is somehow a microcosm of the free market, but one can’t deny that it’s vampiric—er, necro-vampiric. They’re sucking the deceased dry. Dead labor rather than living labor. Like a vampire biting into the neck of a zombie. A paradox, maybe, sure. Ironic, yes, okay.

In some ways death is a great thing for capitalism. We all know the trope of the adored and/or embattled public figure who dies young and/or old and spawns a million kids size large t-shirts, dorm room posters, skateboard decals, etc. Late capitalism means literally paying respects to the dead, thank you very much, and—gasp—even socialists do it. Marx was right that capital is a vampire that sucks on the living. But living in a consumer economy in the 21st century means being a vampire, too. And fortunately for would-be profiteers, the dead can’t bite back. Although jamming your canines into the pale and exsanguinated flesh of the dead is zero-sum, so long as you pay to bite, the powers that be will be happy to present a dolled up corpse for your consumption.

It’s not all bleak, though. Zombies live forever, in their way. And most people are more than happy to participate in the economy of hagiography and myth-making, zombification and blood-sucking. Death now makes zombies of us all and, who knows, if you’re lucky, people may feast on your corpse far past its expiration date. Inspiring!

By the by, I’m looking for someone to be the Engels to my Marx this Halloween. I found some cheap costumes. –JM 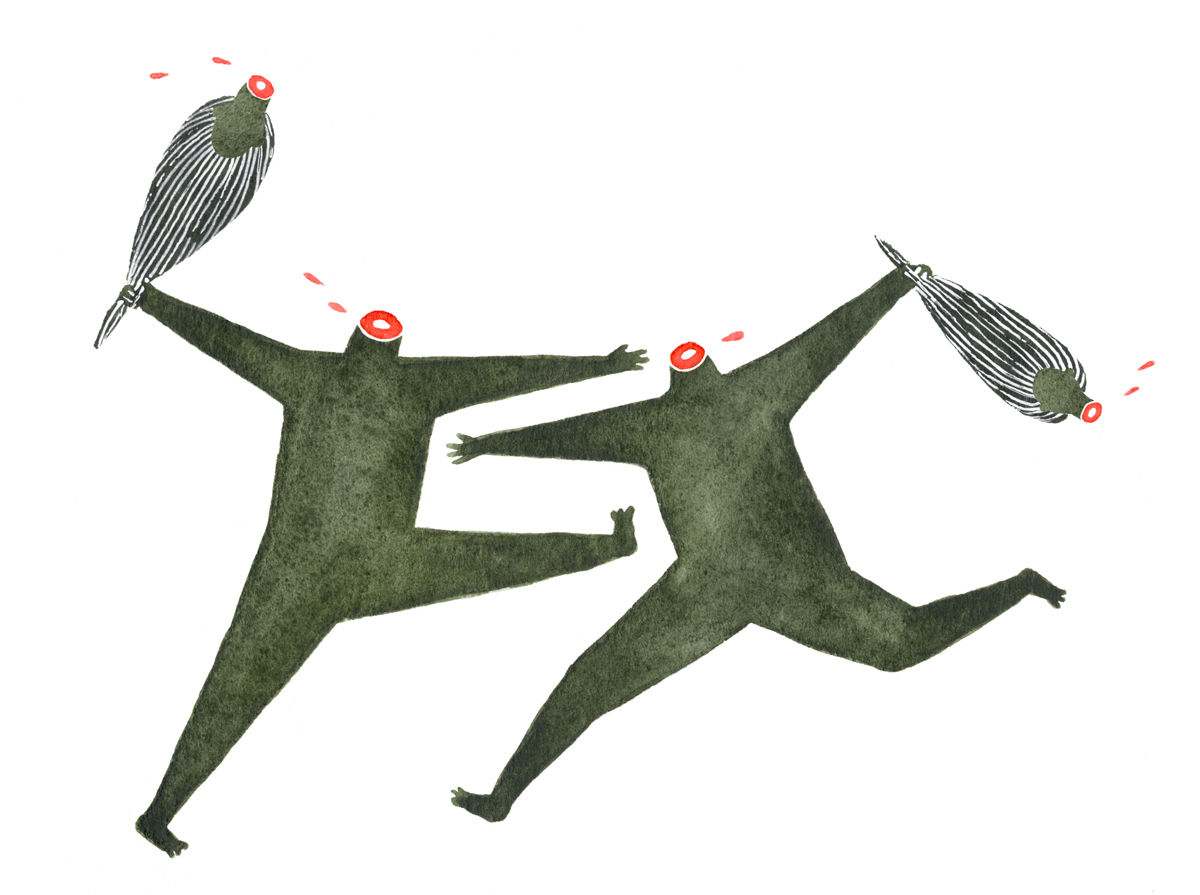 Following a nationally televised public discussion that drew objectors and spectators alike to their home, the Barrett family of Parma, Ohio has voluntarily taken down their Halloween decorations. Their front yard display featured a plastic skeleton in a black robe, a gargoyle, and three gruesome fake corpses.

Starting from the right side of the lawn, the first corpse is bald, child-sized, and impaled through the stomach on a flag pole. There’s a syringe sticking through its right wrist and a knife stabbed into its neck. Next is an upside-down crucifixion of what appears to be a fan of the band Slayer. This corpse has been stabbed with three syringes. The last corpse, wrapped in a body bag, hangs feet-first from a tree. The scene looks like a botched blood donation drive that a deranged doctor is in the act of covering up.

The Barretts live one block from Denzler Elementary School. According to Cleveland 19 News, Jackie Anselmo, the mother of a Denzler student who was especially disturbed by the decorations, “took a picture and emailed the city to try to get the display taken down.” Parma officials told Anselmo there was nothing they could do. The display represents freedom of expression.

In an interview with Fox 8 Cleveland, Vicky Barrett, mother of two children, reveals that she took the decorations down for the safety of her family, not as an act of “caving in” to neighborly pressure. She found people she didn’t know taking pictures on her lawn at midnight while her kids were sleeping. With regards to her right to express herself, Barrett said, “We have amendments for a reason.”

Free speech aside, the town’s outrage brings a peculiar boundary into focus. There is a socially acceptable aesthetic of terror and the Barrett family’s yard decorations crossed the line. The people want black cats, Frankenstein, and moonlit silhouettes of haunted houses, images we’ve been primed for in candy aisles and Halloween specials on TV.

Fox 8 Cleveland’s follow-up broadcast shows Barrett dejectedly moving the impaled effigy to a new spot in her backyard. In her interview, Barrett seems genuinely confused by the public reaction. Halloween spirit crushed, she discloses her plans for next year’s display: “We don’t want to put up a pumpkin or any of what some people would think are typical Halloween decorations. I don’t think we even want to do anything.”

Their two-year-old will grow up in a house that leaves a bowl of candy on the front stoop. –BB