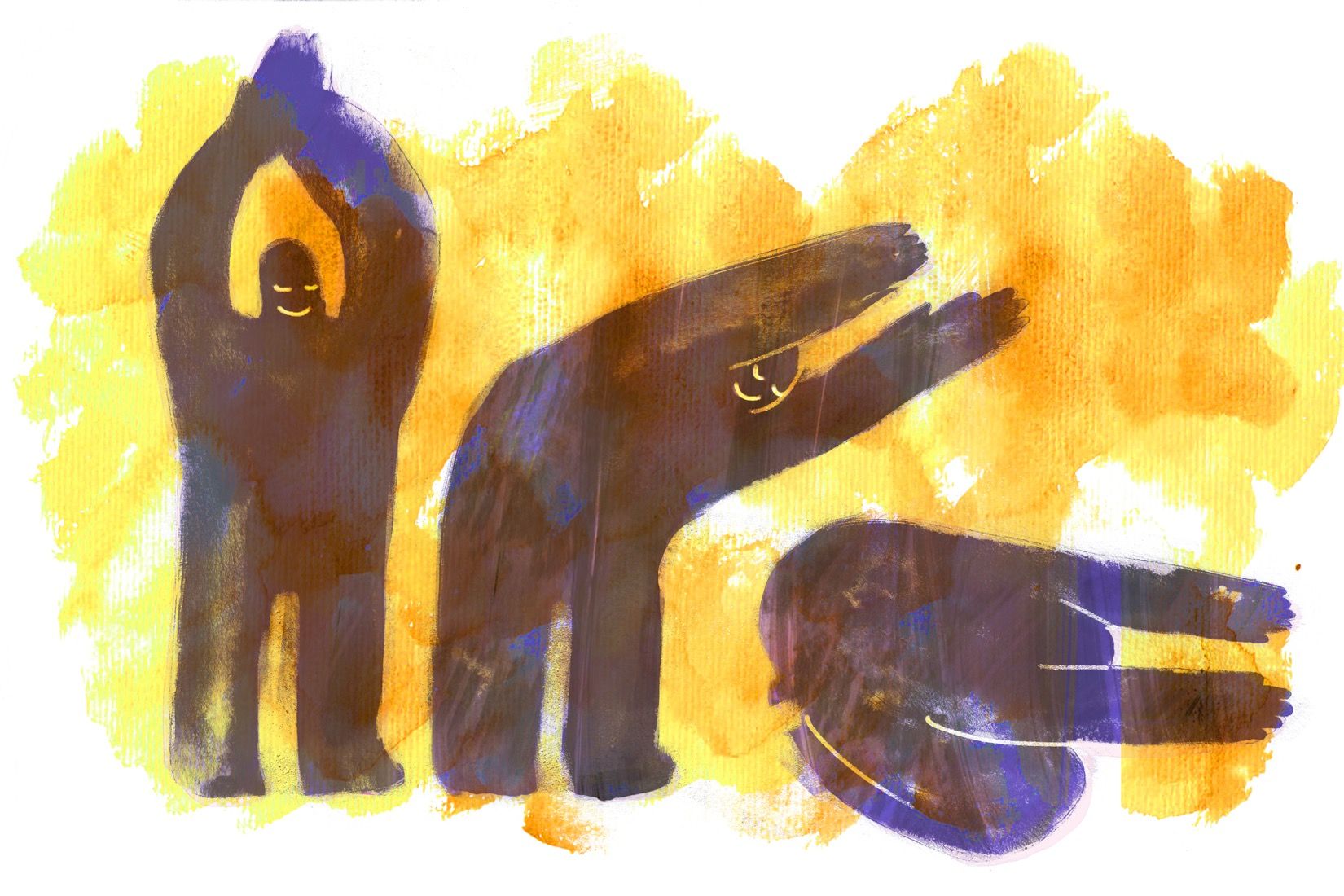 In 2014, Washington, D.C. extended the sales tax. Residents would now cough up for tanning services, car washes, and upholstering jobs. They would also start paying taxes on healthclub services; among healthclubs, the legislation specified “a charge for a multi-lesson pass to a yoga studio for access to classes with the studio’s yoga instructor.”

D.C.’s yoga community let out a yelp—yoga is not some banal exercise, to be lumped in with tennis clubs and gyms! It is a spiritual practice, and its studios are more akin to churches, masjids, and other houses of worship (which, in the US, are tax-exempt). But the taxman won the day. For a year, Washingtonians have been paying six cents on the dollar when copping a monthly studio pass.

The quest for spiritual recognition is better off in Providence County, where over thirty studios, myriad gyms, the Unitarian Church, and the Pawtucket Senior Center continue to offer yoga classes without this particular tax. Likewise in New York City, where, in 2012, yoga was explicitly ruled exempt from sales tax. Department of Taxation spokesman, Geoffrey Gloak, delivered a knowing justification. “We looked into the history and origins of yoga,” spoke Gloak, “and found that it was more meditative and spiritual rather than fitness.” This detailed position aside, the question remains: when Americans do yoga, what are they doing?

Some of the folks hitting the yoga studio this week will be attending a fitness facility. Hitting the mat. Working out. Every Wednesday, say, 7:00 PM sharp. But at 6:43, as they snap the waistband on their stretchy black pants, another set of practitioners will be climbing on their bicycles to ride down to their house of worship. Such is the uncertain dichotomy of America’s yogic experience.

At 6:56, both types will pay to enter a studio, the aesthetics of which are connected, by various skewed conventions, with Eastern spiritual practices. The room will exhibit certain calming palettes, certain aspects of minimalist design extracted from Japanese Zen, some symmetry, a few indoor plants. A teacher—who may have undergone 10,000 hours of training, or perhaps only 200—will step them through concerted movement, and remind students to be mindful of their breath. The teacher may spray essential oils from little squirt-bottles, or lead chants beseeching the Hindu Lord Shiva. Practitioners will set intentions for their practice—not intentions to lift more weight or run farther, but meditations on kindness, or on privilege, or on the constitution of self. Surrounding the dedicated yogi will be clumsy initiates, glancing around for some indication of the next posture, as well as the fellow studio members who congregate weekly for the ritual. Say, Wednesdays, 7:00 PM.

At 6:59, everybody is settling onto their mat. Yogis who see the practice as a workout will tell you this: to commence yoga, the first thing you do is unroll the mat. Those who perceive a spiritual factor will reply that, for a mat to be unrolled, it must first be bundled. Certainly, yoga was already rolled up into a number of East Asian cultures and religions by the time it reached American shores. The range of practices that can be called yoga was developed over millennia in and around India. Only over the last century-and-a-half have yoga’s foundational Sanskrit texts—the Upanishads, the Bhagavad Gita, Patanjali’s Yoga Sutras, Ayurveda—broadly infiltrated the American imagination.

Home to the highest proportion of Asian Americans from the mid-1800s, California was American yoga’s inevitable epicenter. Yogis foreign and domestic congregated around the Bay Area, and by the 1950s had taken up the serious study of Classical, Hatha, Raja, Ashtanga, Buddhist, Jain, and Tantric forms of yoga. Many of the early leaders were Indian yogis, like Maharashi Mahesh Yogi, who instructed the Beatles and B.K.S. Iyengar. The seeds of their influence were cast by the handful in the late-60s, as San Francisco absorbed and expelled multitudes of the disaffected, young, mostly white suburban dwellers known as hippies. Bohemians and longhairs on the San Fran streets embraced what they perceived to be Eastern spirituality as part of a larger agenda of countering mainstream culture—some became serious Buddhists, Taoists, and yogis, while others hopped onto a more mutable flower-power bandwagon. When overcrowding made San Francisco unviable, the flower children became diasporic missionaries, spreading the word from Vermont to New Mexico, deploying versions of the yoga ashram in new communes and old suburbs. Their efforts and attachments, conscious and otherwise, proliferated fragments of so-called Eastern spirituality throughout the country. These cultural seeds sprouted in the 1970s and 80s, from which time yoga experienced its meteoric rise in the US.

Many of these nouveaux yogis encountered Eastern traditions with a selective eye, and appropriated attractive elements as they saw fit. Americans passed over a whole host of yogic teachings, but latched onto a few pieces: asana, or those postures and movements with which yoga is often conflated, pranayama, or breath, and a blurry sense of meditation and ‘Eastern’ teachings. Asana is part of the yogic traditions, but is only a narrow slice of the practices articulated by Patanjali in his 5th century Yoga Sutras—in which he describes an eight-limbed practice combining spiritual and lifestyle dimensions, including Vedic study, celibacy, religious ceremony, and the rejection of avarice and vice. All of this is intended to liberate the individual from the cycle of birth and death in which he suffers.

But these features are only vaguely alluded to, or entirely disregarded, in yoga studios where asana is the focus. Celibacy is surely not espoused at fitness center classes, where yoga is radically different from its forebears; in such places, the practice has been transformed into an act of appropriation.

Edward Said, in describing the objectification and appropriation of Eastern culture in his work, Orientalism, wrote of those “Eastern sects, philosophies, and wisdoms domesticated for [Western] use.” Yoga clearly falls among these. And just what has it meant to domesticate yoga? To bring it home, and to feed it, so that it may earn its keep.

For the mat that is rolled, and the mat that is unrolled, are both the same mat: the mat that is purchased. America’s 20 million yogis have generated a sales economy around their practices worth as much as $27 billion. So, whether or not D.C.’s taxmen get a slice of the pie at the studio door, they will find that a plateful has already been served to them by the market in yoga’s accessories. Outfits, practice mats, incense, tapestries. Icons and statues of Buddha, Ganesh; supportive blocks, private lessons. Books on technique and theory, cute little quote of the day calendars, specialty Chai. Brands like Lululemon make a killing. And then there is Yoga Journal itself. A monthly magazine created by the California Yoga Teachers’ Association, the Journal has grown since 1975 to a 1.3 million annual readership. Their mission? “To meet readers wherever they are on the mat and offer the latest updates from the yogasphere, while honoring the traditions and authenticity of this powerful, 5000 year old practice.”

Commercial mobilization has propelled the yogasphere’s explosive growth. Cities across the nation co-opt yoga into their public images, leading to a superficial diversification of practices. Yoga Journal’s October 2015 issue detailed ten cities where, in the words of Yoga Alliance’s Andrew Tanner, people “have fully accepted yoga into the zeitgeist” such that a majority now view it as “healthy and worthwhile.” In Portland, Oregon, the “highly educated population” has produced “a collaborative and socially conscious yoga community.” Austin, Texas has crafted its practice to complement its “thriving live-music scene and eclectic mix” of cultures. Los Angeles, San Fran, New York, and Denver make the list, each with a unique “hometown pride.” But in all ten of the cities, one can attend a CorePower yoga studio; and thanks to homogenous interior design, once inside, one feels that one might be anywhere. Flipping deeper into the Journal, the reader faces page after page of trim figures in various postures. They are all neatly dressed in fair trade clothing, and smile broadly out from the advertisement pages, as if inviting the reader to their local studio, and maybe to hit the juice bar after class. But there’s no money left for juice—it all went into the outfit, and to the charge at the door. To get in on yoga, Americans are shelling out bigtime. How do they justify the expense?

All too often, time and money spent on yoga come down to an investment: one sows to reap.

It has been so since the hippies first laid a hennaed finger on it. B.K.S. Iyengar, oft credited as the most influential figure in American yoga, loosed the cork on framing yoga as a practice pursued for its benefits. As a youth in India, he found yoga helpful in overcoming the many illnesses that marred his childhood. His 1966 book, Light on Yoga, was an effort to share yoga’s benefits by systematizing asana in a way that made postures accessible to the uninitiated. Public figures continue to articulate yoga’s importance in a similar fashion. As emcee-cum-reggae rocker-cum-sustainability guru, Michael Franti, explains it, “yoga has extended my health, but it has emotional benefits, too. It has helped me be a better father. A better musician.” This language of benefits is pervasive among American yogis; many see practicing simply as a means of bettering one’s existence—physical, emotional, and (optionally) spiritual.

Vague benefits-thinking has been supported by science and aped by corporations. Empirical evidence now substantiates yoga’s benefits. Professors Bower and Irwin at UCLA published an article this year to declare that yoga, along with other “mind-body therapies” of East Asian origin, has “been shown to be effective in reducing symptoms and improving quality of life.” Less bad; more good—just what the doctor ordered! Others corroborate; Chandwani et al. found that yogic practice improved quality of life among breast cancer patients. In the hands of major San Francisco tech companies, yoga-as-wellness is now being exploited to improve the lifestyles, and thus the productivity, of employees. Google, Twitter, Facebook, and others have integrated yoga into the workday with free classes and company teachers, special rooms, and tie-ins to corporate philosophies. The employee centers herself during her hour on the mat, so that she can keep pace during the rest of the day, and still feel sane, or somehow above it all, as she takes the train home at night. For this reason, Slavoj Zizek has pointed to yoga as a new facet of  Karl Marx’s framework of religion as the “opiate of the masses.” Zizek, in his discussions of “Western Buddhism,” argues that the “meditative stance is… the most efficient way for us to fully participate in capitalist dynamics while retaining the appearance of mental sanity.” This would suggest that the yoga studio is not only a gym and a house of worship, but a performance-enhancing drug for modern workers.

Patanjali wrote sparsely of benefits. For him, asana was never a means to increased workplace productivity. Among the benefits he did list is the observation that, “from self-study and reflection on sacred words, one attains contact, communion, or concert with that underlying natural reality or force.”