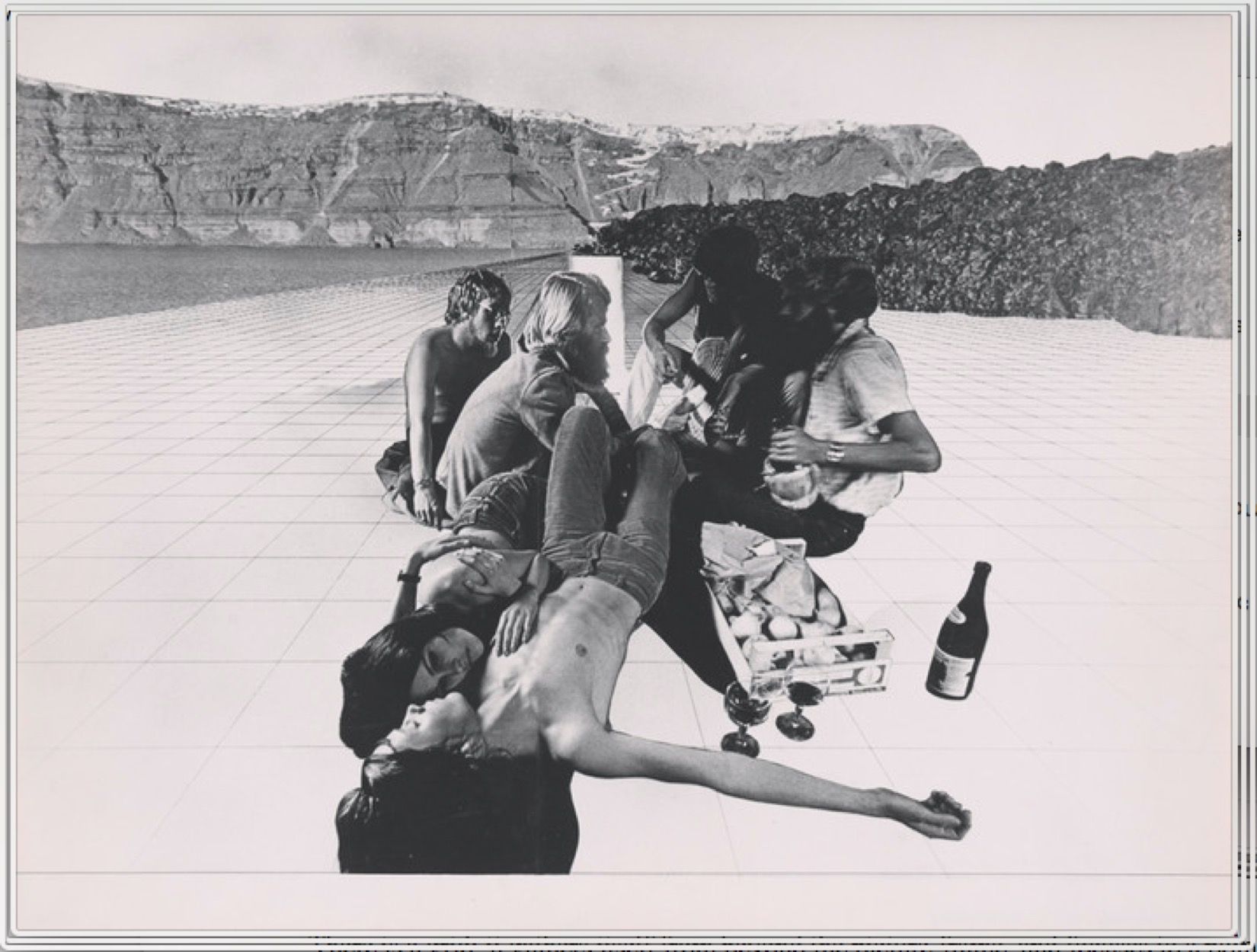 There is a grid; it gathers itself from beyond the picture-frame, and focuses to a point in the distant horizon. From that distant point, facing the opposite direction, one can imagine the grid’s expanse ad infinitum, like an ocean that falls off beyond the curvature of the earth. A group of young men and one woman meet on this grid, pasted together in relief against the precise lattice beneath them. They eat; they play music; they listen; the woman and a man lie down, embracing. Where is this rendezvous? There are mountains, bounded by a field on one side and a forest on the other. The grid, though extending beyond the frame in the direction of the viewer, terminates within it at this natural border. 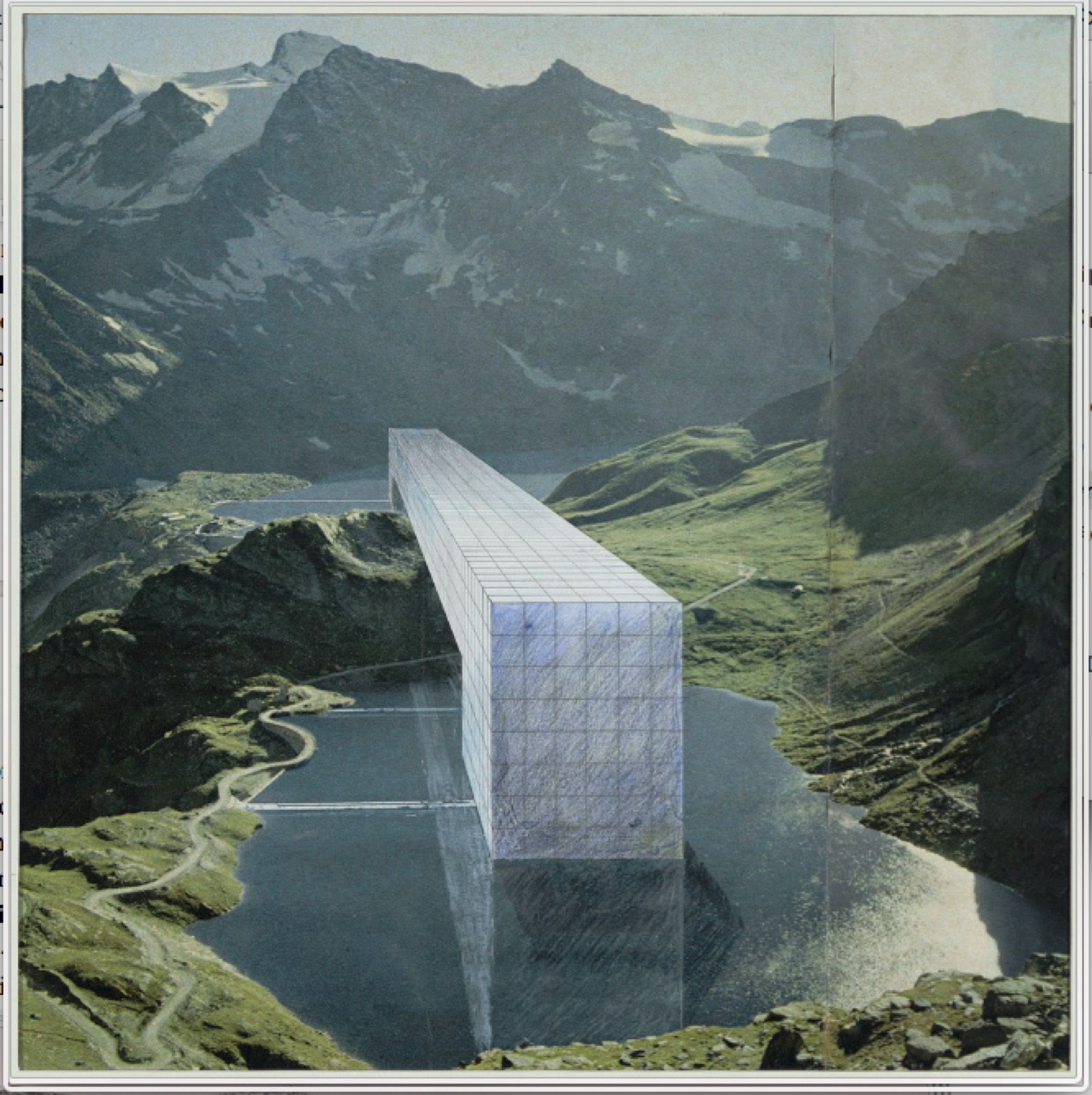 In 1966, two recent graduates of the Florence School of Architecture, Adolfo Natalini and Cristiano Toraldo di Francia, began Superstudio as an architectural firm that didn’t practice architecture, but thought it. Fed up with the old guard of architects who ran the Italian universities, but lacking the means or clout to get commissions, the young architects used the language of architectural drawings and collages to critique the blanket of modernist architecture that covered many cities in the post-war period. Whilst parading values of democracy, transparency, and egalitarianism, post-war modernist architecture was proving to be imperialistic and callous to particular histories and human needs. In an accelerationist gesture, Superstudio pushed modernist architecture to extreme ends in a polemic against it. One of their projects envisions a giant cube in the middle of New York City in which millions of human brains lie thinking in liquid-filled containers, finally “free to reach the supreme goals of wisdom and madness, perhaps to reach absolute knowledge,” as put by Superstudio member Piero Frassinelli. But their most famous project was the Continuous Monument, a series of architectural collages that imagined a grid superimposed across the Earth. In some of the collages, the grid wraps around natural landscapes like valleys or mountains [fig. 2]. One displays Manhattan, spared as a relic of an architecture that used to be, and surrounded by the neutral, monumental non-architecture that has supplanted it. Picnic-Orgy [fig. 1] is one such visual thesis of the Continuous Monument. The grid was a conceptual project, never meant to be built. Its sublime goal of a total, equalizing surface is beyond even the scope of representation; hence the strategy of a series of collages, geographically scattered, that each imply the grid as a whole.

The imagined material for Superstudio’s grid was glass—a symbol of industrial technology, equality, and clarity. The glass grid would dominate Earth’s topography through sheer neutrality and ubiquity. It’s worth noting that during the first test of the atom bomb, the area of impact turned into glass because of the explosion’s violent heat—neutrality becomes neutralization by technical force. The architect and urban theorist Rem Koolhaas, whose many conceptual projects take after Superstudio’s example, noted how the actual urban grid that structures so many cities “is, above all, a conceptual speculation [...] in its indifference to topography, to what exists, it claims superiority of mental construction over reality.” 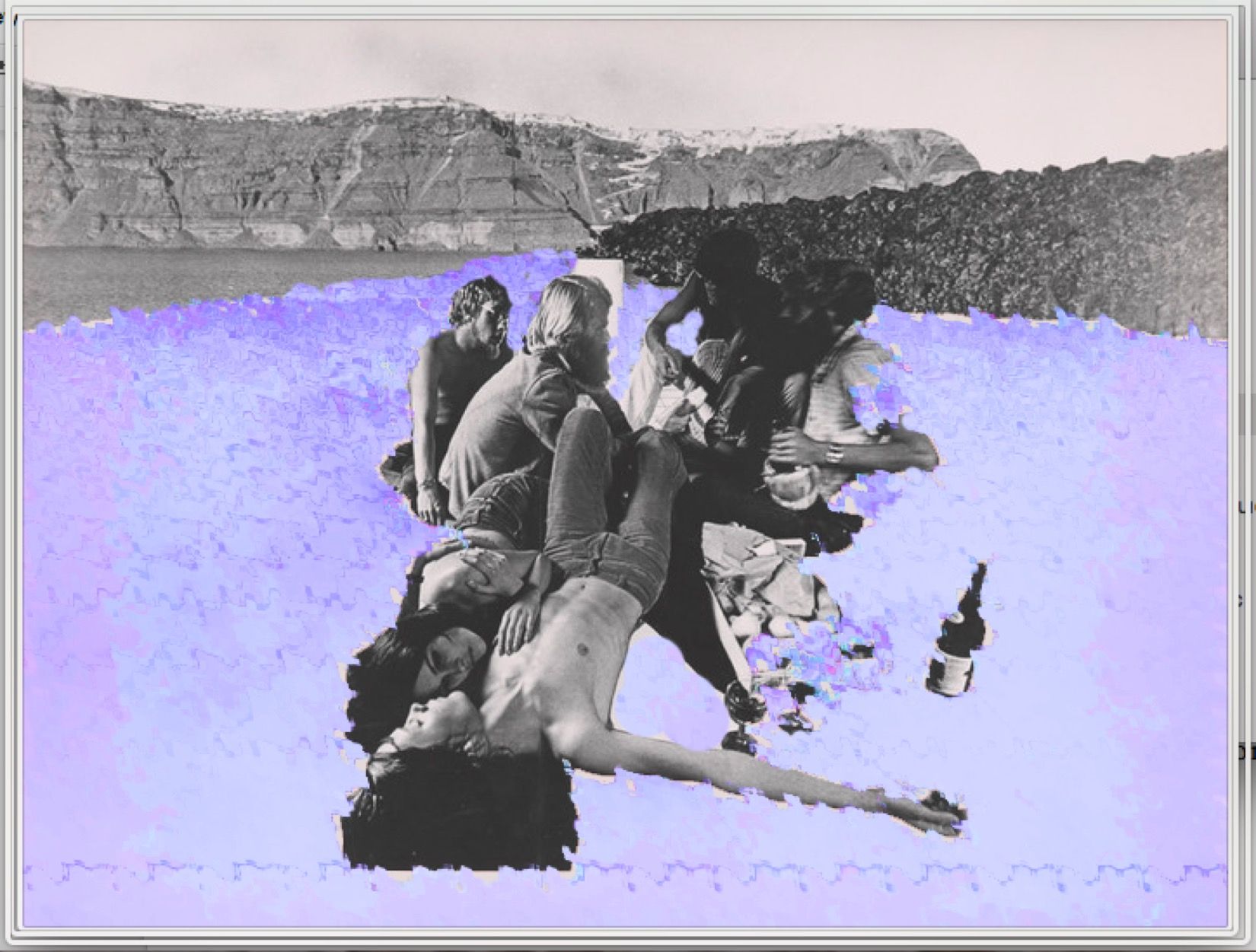 The grid counters narrative, which takes place in and through architecture. Likewise, the Continuous Monument is a monolithic architectural gesture, implemented over time, in defiance of time. In this imagined, context-less setting, there is no benchmark against which to measure normality or strangeness. A picnic-orgy measures against an executive meeting on the same terms.

The grid critiques this argument by taking it to a dystopian extreme. The Continuous Monument corrodes the freedom promised of modernism and reveals that it only arrives at the expense of oppressive structurelessness. Humans become collage-pieces, violently cut-out of context.

The Continuous Monument is a terrifying and beautiful nightmare; a moment of consciousness, and its foundation dissolves. For one thing, glass, while apparently stable and clear, is not actually solid: it is structurally amorphous, which means that on a molecular level it is somewhere between a liquid and solid. While it has some crystalline elements of a traditional solid, its molecular structure is randomized like a liquid. On a geological timescale, glass is melting: in its physicality, the grid becomes a pool, without structure, enveloping.

Furthermore, a grid, while refusing all narratives on the surface of the Earth (human history, architecture, diversity), forgets the depth beneath it: millions of years signified by layered inorganic material. From this perspective, the glass grid is one scene in a much bigger story playing out beyond the sensible limits of human beings, cosmically slow (or fast).

This crystalline grid-pool has a source: Earth’s crust. Industrial glass manufacturers use a synthesis of sand, recycled glass, soda ash (sodium carbonate), and limestone (calcium carbonate). Soda ash derives from sodium chloride (salt), which is primarily gleaned from sea water and harvested from brine wells, salt lakes, and salt mines. Limestone is composed of skeletal fragments from marine organisms like coral and mollusks, and mined for in areas in which the sea level has been higher than it is now. Glass is the corpse of an ancient ecosystem, dug up from the earth and smelt into transparent grids for human ecosystems.

A glass grid that spans a global surface ignores a latent impossibility, and of course part of the methodology of conceptually realizing a physical impossibility is to tease out the ideology working under cover of unfeasible dreams. Modernist myths, whose conception of human history is incommensurate with geological time, ground themselves in Ebenezer Howard’s plan for a Garden City—an Earth of fertile abundance, an urban Garden of Eden that gestures towards an achievable utopia born of human technological progress. But this end is always a tendency, a gesture that never finishes, except in an implication beyond possibility itself. History goes on, even as the forces shaping it—imperialism, massive exchanges of wealth and power by those with wealth and power—feign a messianic motion. 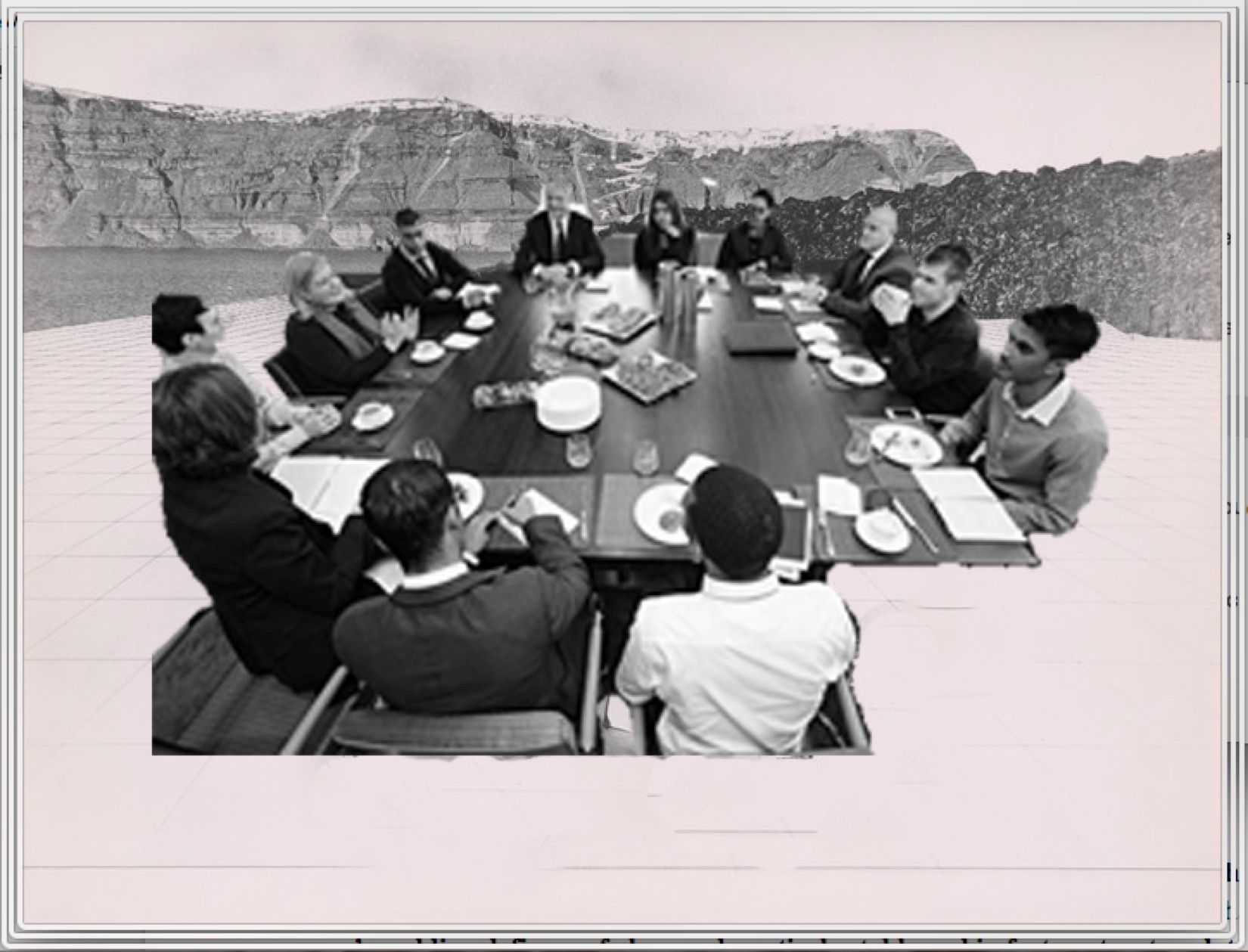 In 1969, ARPANET went live, coinciding with the Continuous Monument’s critical assault on architecture. But while Superstudio’s grid was never built, ARPANET prefaced the development of a genuine global grid of sorts, the Internet. The Advanced Research Projects Agency Network was the first computer network, built under the aegis of the United States Department of Defense. At first ARPANET only connected four computers at Stanford, UCLA, UCSB, and the University of Utah, respectively. By 1975, the number of nodes in the network had grown to 57; by 1981, a new host connected to the network every twenty days, inexorably expanding ARPANET into a rhizomatic realization of Superstudio’s conceptual impossibility: the fluid, potentially omnipresent, apparently democratic Internet.

What was hyperbole to Superstudio is, at least in part, reality today. The Internet problematizes the relationship between isolation and association, muddling notions of authenticity, certainty, and subjectivity in a similar manner to Superstudio’s conceptual collages. Yet, unlike the Internet’s creators, they knowingly did so, and only in politically prescient theory. The Internet is real, yet not in any analogue to our imagination of it as a neutral, ubiquitous, invisible network. We picture ourselves interacting in digital spaces when using services like Facebook or collaborating through Google Docs or Dropbox; we imagine our voices and images mingling in a cloud, but the cloud is underground, in transatlantic cables and bleak server farms. The image of the Internet as equalizing and everywhere, is promoted by the military-industrial complex from which it sprung. The reality: a power-laden regulative apparatus, at once a liberating commons, an invisible prison, and a physical strata composed of metals extracted from the Earth. Multi-million dollar contracts between state agencies and our most-used Internet services render them a police on the citizens who use them. The scene in Picnic-Orgy is ambivalent; while dystopian to some extent, an extension of modernism to absurdly equalized space, the scene is still beautiful, elegant, captivating: a paradise in image form. Likewise, the Internet maintains a pleasant image, belying its oft autocratic, environmentally insensitive, and scary reality. It’s a dream. But while we conjure it up in our minds, it exerts real transformations on our social and physical landscape. Can we sustain this dream, now that it is not a collage in an art museum?

As the glass grid balks at its material origins, refuting its lineage of stone and sea creatures, the Internet obscures its material base on all fronts. The Internet is all water, flowing through protean screens and polished aluminum. The user interface through which people access the Internet literally gives a face to an opaque and complex organism of metals and electricity; the interface is more than three times removed from the electrically charged hardware of a computer (if such a hard/soft distinction can be made) by machine language, assembly code, high-level programing language, and finally a visual, trivial language. The elements used to bring the Internet to life [Zn, S, Ag, Cl, Al, Cu, Au, Y, Eu, K, F, Mg, Mn, Cd, As, Gd, Tb, Ce, Pb, Si, Ca, Ti, P, Pb, Fe, Sn, In, and Cd] are buried beneath application windows, videos, documents, C++, and binary code—buried, in spite of the fact that they’ve been un-buried to reach their present form. And the very name ‘Internet,’ which describes a decentralized system of nodes and signals, brings together these parts into a fictional unity—a continuous monument.