Paths to the Ultimate Mushroom 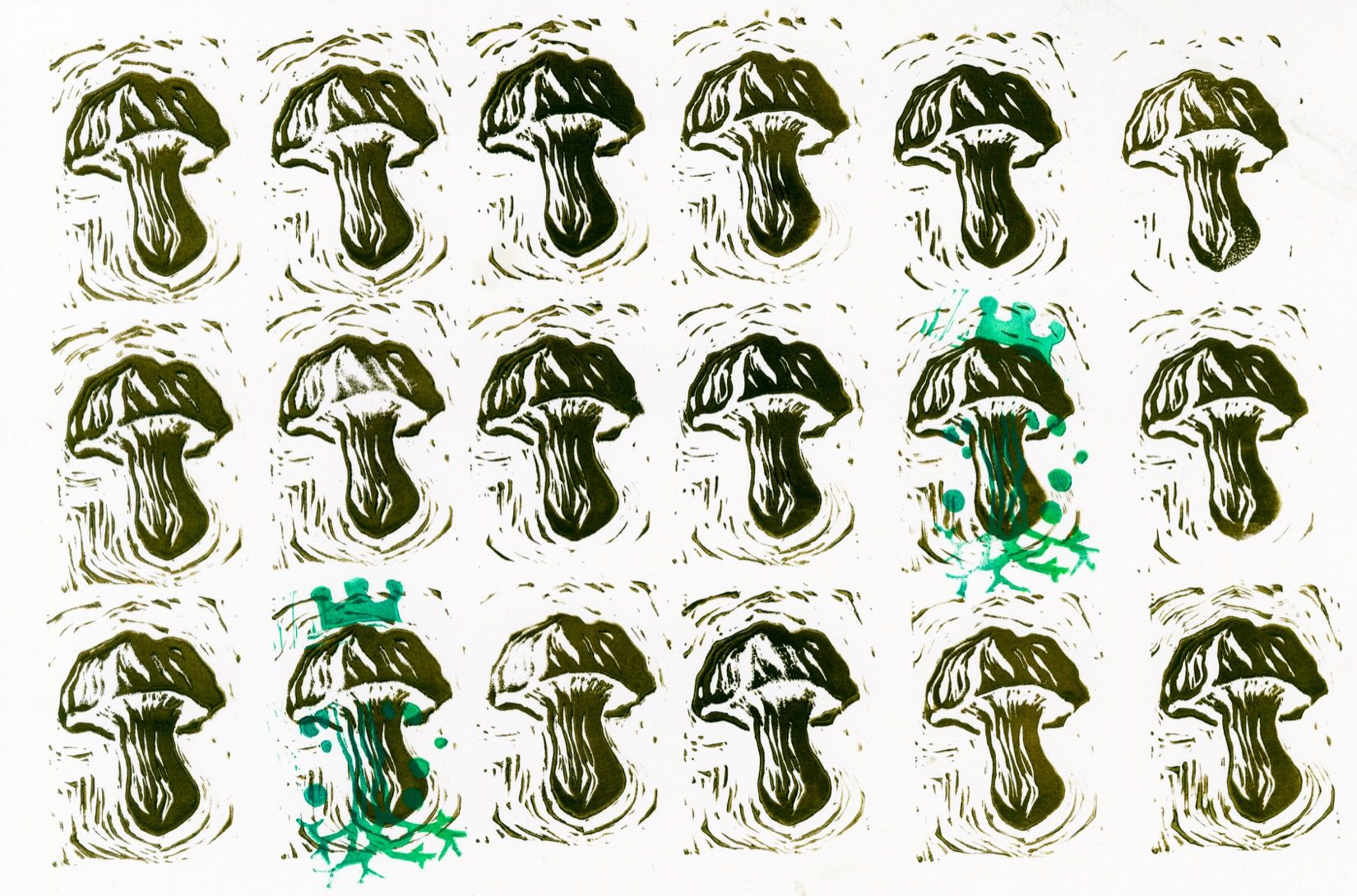 Under the brush, a golden-red cap glints. Trembling, I push back the undergrowth and gasp. I then gingerly pull out the Boletus edulis and bound over to my father and grandfather, beaming with pride. “Papa Sasha, grandpa Vitya, a Белый Гриб!” Father and father’s father, who emigrated from the Soviet Union and instilled in me a passion for mushroom picking, are grateful and excited—but then they take a closer look.

“This is not the King Bolete, this is not a cep, a porcini mushroom, loved all over the world! It is its bitter twin. Take a lick!”

Not believing my ears, I take a lick, apprehensive. A profound acerbic taste strikes the tip of my tongue, then slowly overwhelms all of my senses. My eyes widen, and shortly after narrow with anger, with bitterness. I am indeed bitter about it, resentful of the illusion. The quest for the Boletus edulis had ended in a false Holy Grail.

My parents and grandparents were part of the first wave of immigrants to leave the Soviet Union, my dad’s side being especially early, migrating in 1975. With them, they brought cultural suitcases that were opened to me upon my birth. I was happy to find some mushrooms in there. Mushroom gathering has always been a staple activity for Russians. But not all mushrooms are equal, or equally good, for humans. Many are deceiving. Perhaps this is why most do not pick mushrooms, fearing venomous retribution. But I don’t believe this is how one should live life—instead of avoiding a whole realm of knowledge and delicacy, one should strive to confront it. Mistakes will occur along the way. They are, in fact, quite common. This is the tale of one of them, a tale of deceit through which I learned how to find what I am truly looking for.

I’m in the woods again. I’ve been here before with father and father’s father. I am not afraid of getting lost, having brought no bread crumbs with me—these woods are light, full of promise. After all, I’m chasing the mushrooms, chasing the dream. To find the best I must stray from the paths, for it is far more likely that the ones on the path have already been picked. I spy an opening and plunge into the forest. Quickly, father and grandfather are two specks in the distance, each pensively following their own course. Back in Mother Russia, the picking had been different: my dad recounted to me how in Leningrad, hunting for mushrooms was an immensely popular and competitive activity. He would get up with my grandparents at the crack of dawn and take a train to the countryside, in hopes of not being late—sometimes, upon arrival, a throng of Russians would be already streaming out, baskets bursting at the brim, having completely combed through the forest. Now, my family enjoys the luxury of not being rushed, for there is no such competition in the US. In fact, the few people we encounter on the trail with their own baskets are Russians themselves. I take our getting up at a comfortable nine o’clock completely for granted.

Meanwhile, our taxonomical voyage begins; and, beneficially for us, there is just one path, long ago identified. We enter through the gates of Kingdom Fungi. Fungi used to be part of the Kingdom Plantae, as in the 18th century there were only two kingdoms, Plantae and Animalia: plants, which have cell walls, and animals, which don’t. With the advent of the electron microscope, allowing for study of organisms in great detail, the animal–plant binary was expanded. The Fungi Kingdom was established after two key distinguishing characteristics were identified: fungi are eukaryotic—their cells contain both nuclei and organelles in their membranes—and, they don’t have chlorophyll. As chlorophyll is the biomolecule that is needed for plants to absorb energy from light, this means mushrooms cannot photosynthesize. Thus, Fungi are heterotrophs because they cannot eat light for lunch, instead nourishing themselves by absorbing organic carbon. This is done by decomposing the surrounding environment with enzymes and absorbing the resulting grub.

Inside the Kingdom, there are many divisions. It is in Division Basidiomycota that our epigeous (above-ground) macrofungi are ranked. The first thing to note is that flagella are absent. These are whip-like structures that make locomotion possible for organisms such as bacteria and algae. Basidiomycota are filamentous, composed of hyphae, which are tiny tubular structures that grow at the root like hair. The collection of these hyphae is called the mycelium: the underground body of the fungus. It is through the mycelium that a mushroom nourishes itself, using the hyphae to penetrate decayed organic matter and absorb the nutrients.

I duck and weave through the branches that jut out sharply from the trees. My eyes move to and fro, here and there, front and back, back and forth. Porcini could be anywhere, for when spores are disseminated from the mushrooms after reproduction, they are carried wherever nature pleases. Spores start out at maximum several micrometers—it is no hard task to animate them. Winds and rains, earthquakes, scampering animals…these are the forces that perpetuate dispersal. These forces can disperse humans as well—but in the case of my family, it was more the ideological indoctrinations permeating through every Soviet institution, the totalitarian state, that did it.

I move blindly towards a porcini, as my family once crossed the Atlantic, as taxonomists advance unto the Class Agaricomycetes of the Basidiomycota Division. This means that the fruiting body of the mushroom can be differentiated into three parts: the pileus, the stipe, and lamella, or colloquially the cap, stem, and gill.

There are agarics all around, all poking out at me from the Earth, strange fingers with inflated tips pointing at me, letting themselves be known. Yet they are lamellous, and the presence of gills means that the cep is not among them. Within Class Agaricomycetes, the Boletus I’m in pursuit of belongs to Order Boletales. The underside of the cap in this order is instead spongy, dotted with many pores. For now, I mostly spy many Suillus luteus, another Boletales, commonly known as slippery jacks. These are fine mushrooms, but not up to par.

A table materializes in my mind, adorned with a panoply of soups that my Russian grandparents have made for me over the years of my childhood. Most of these have been made with slippery jacks—but far superior were the ones prepared with porcini, always made by grandpa Vitya. He has disappeared from my view, but I am not worried—we always make it out together in the end.

The cep, the mushroom that I’m after, musn’t be far off, I reassure myself unconvincingly. At least, taxonomically, it isn’t that far off. Among the many families Boletales holds, Boletaceae is the family I hunt. Typically the members of this family are known as Boletes. And we are looking for their king, the king that is, by our allegiance, the king of the whole Kingdom Fungi.

A few hours ago, I mistook a charlatan for a King. This is because biologically, the specimens are part of the same classifications up to their genus. The charlatan was Tylopilus felleus, and is so similar to Boletus edulis that it used to be classified in the genus of Boletus itself. The genus is the taxonomical rank right after the family and right before the species, the end of our journey. It was not until 1881 that the Boletus felleus was placed under a new genera, Tylopilus. The more obvious feature that gives away the fake Bolete is the proliferation of pink pores underneath the cap. And even then, these are not always present—young bitter Boletes’ pores are sometimes white. And it is bitter. The King Bolete, is not.

It’s been a long day. Mushroom gathering with my father and father’s father is frustrating. I have less experience, my eyes move in a less intelligent fashion, I am easily distracted by bugs, and impatient. It is time to go home: our taxonomical voyage is at an end, and my home, the end of my parents’ cross-atlantic path, is waiting. I had only found a forgery of my favorite mushroom, an inedible imitation of the ideal mushroom I was trying to find. The path I took culminated in nothing; I simply did not find it. I sulk on the way back—absorbed in my failure, despondent, my cheeks burning, my eyes downturned—and then, I see the gleam again, hidden by the moss. A golden-red cap. In a fervor, I rip out the mushroom, and hold it to my lips, to deliver a delicate lick.

Nothing. Absolutely nothing. It is usually flavor that inspires, really gets me going—this time, it is the bliss of the insipid raw Boletus edulis.

There will be Grandpa’s soup tonight.

MICKEY ZASLAVSKY B’18 is a fungi.