An Attempt at Exhausting a Space in Providence 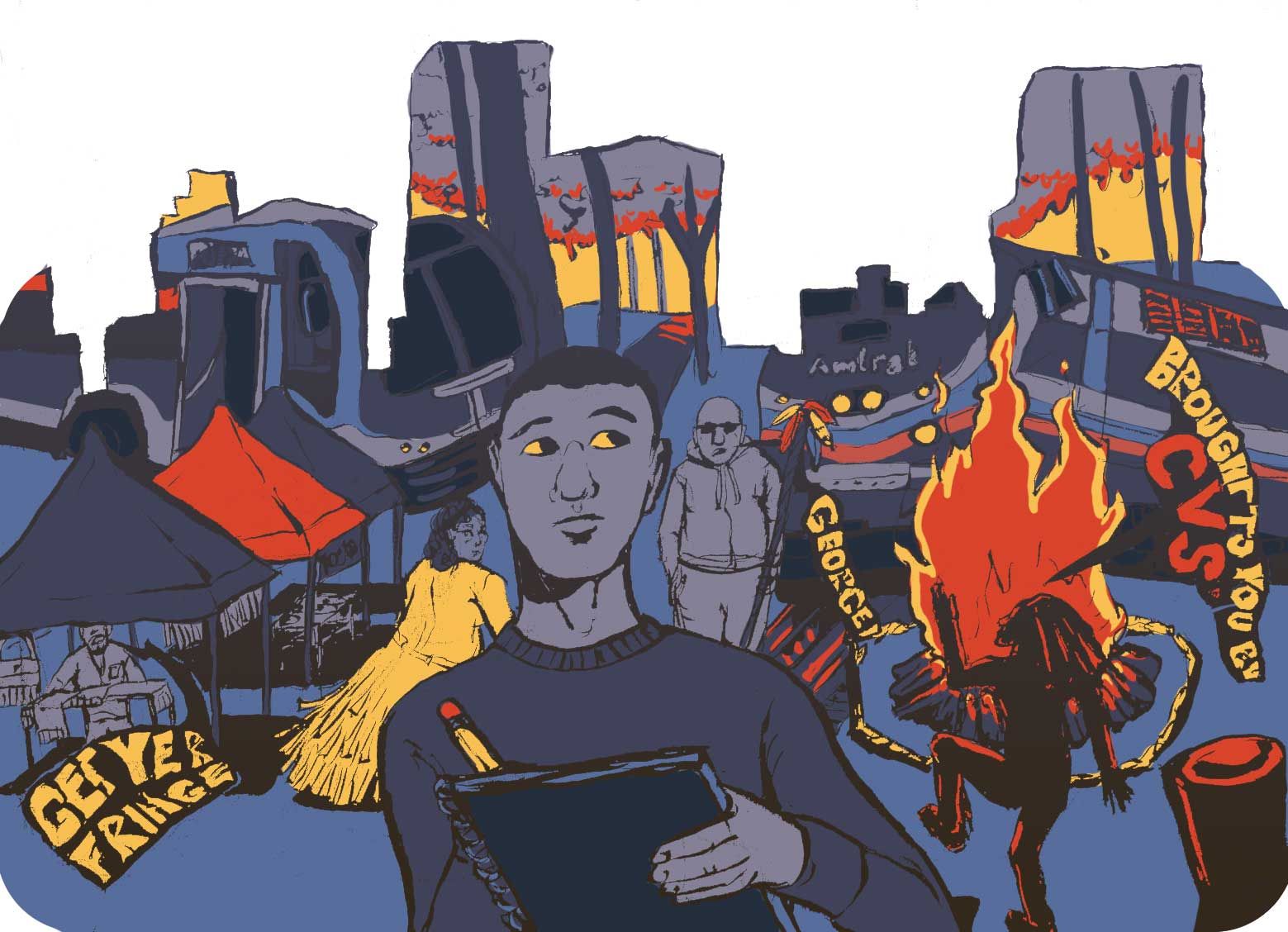 The French novelist Georges Perec often set himself needless literary constraints. In his 1969 novel, La Disparition (A Void), he writes an entire work without using the letter ‘e.’ Falling madly in love with the vowel soon after, he wrote a novella three years later, Les Revenentes (original spelling “revenants”), in which ‘e’ was the only vowel used. In his 1975 work, Tentative d'épuisement d'un lieu parisien (An Attempt at Exhausting a Space in Paris), he attempts to record a space in the city of Paris in its entirety, writing the quotidian. Only by calling out the mundane can it become as interesting as the substantial. Sit in your car and watch cars passing by. Write about them. Sit on a bench near the corner of a busy intersection. Observe.

The 51 goes to the Community College of Rhode Island.

The 72 goes to Pawtucket.

The R-Line goes to Pawtucket.

I am perched in the center of the park. I pick a small circle of soil surrounded by wilting sections of grass—enough to swallow my rear as I sit cross-legged. There is a nice breeze, and the sun is in its decline. Its glow emphasizes the changing color of the trees. The dull flame of autumn is apparent.

To my left, there is a neat sculpture—lines of cursive that converge at their apex to form a triangular prism. There is ‘freedom’ in blue, ‘acceptance’ in yellow, ‘indurability’ in orange.

A stone’s throw from my plot, an announcer introduces the last intertribal of the day. He boasts that the Spirit Singers—elderly volunteers—will dance their hardest for this finale. Dressed in sandy cloth, these Spirit Singers gyrate, swaying indiscriminately to the incessant beating of a drum.

Behind me a group of men—white—stand at a makeshift table. They are selling Minnetonka moccasins. There are rows of vendors—13 as far as my eye can go.

I check my iPhone. The home screen reads 4:53 and informs me that I have 10% of battery remaining.

There is a woman, at least 40, walking along the grounds. She is solemn and moves with grace. She is wearing a robe: suede and mustard and accented with fringe.

Fringe fringe fringe. A vendor under a turquoise tent sells nothing but fringed clothing.

It is time to “blow the buffalo.” I move closer to the chimes.

There is rope bearing off a hexagon. It is supposed to give the appearance of a circle. In the middle of the polygon there is a fire fueled by kerosene.

There are 50,000 people in Providence today—for Waterfire. The announcer tries to wrap things up.

I see a squirrel camped out near the trash. It seems to know it can satiate itself on the scraps of humans. How clever!

Downtown is stuffed to the gills—there are tents by the Moshassuck, too!

I take a long gulp of water from my canteen. I swish the bottle around. Soon I will be out.

Across from the flame, on Canal Street, a Megabus has been stationed for 20 minutes. There seems to be a queue.

A corpulent man in a gray sweatsuit shouts for a George behind me. George does not respond, or if he does, I do not see him. Sweatsuit walks with a beautiful walking stick—wooden with an inlaid spiral pattern. It is overflowing with feathers. I wonder if I can buy one from the onslaught of vendors.

To my immediate right, a couple—white—packs up and prepares to leave. They load up their stroller. A black man in a red Old Navy sweater watches over the child as mom and dad rummage for belongings.

A procession, a family of myriad generations, forms behind me. They are all dressed formally. The father dons a navy quarter zip; the youngest girls, the daughters, wear floral cardigans. It seems as though they have just left a church function. (Did they leave from St. John’s Episcopal, on the corner of Church and Main?)

The Megabus leaves. The announcer starts another dance. Four flag bearers lead a jubilant march around the fire. Two black girls in pink and purple fringe jump ecstatically in the circle. Behind them, two white boys play with feathers; they don’t dance.

The ritual dies down. The procession marches out of the circle (as this occurs, a biker in a leather vest stands next to me for maybe two minutes), and two elderly people remain. A black man in a coal t-shirt and faded denim unconsciously bounces to the drum, his knees buckling in tempo.

CVS is a sponsor of this pow-wow. The announcer lets you know twice.

The 5:15 Amtrak comes in, the horn blows promptly. It seems as though the audience takes this as their cue; they all begin to file out of the park.

For all the congestion of Waterfire, the traffic doesn’t seem too stopped up. (Perhaps because the sun hasn’t set.) A blockade of black automobiles sweeps down Canal.

My phone dies, and I ask the white man next to his stroller for the time. He is clothed in beige and brown, and has on well-worn Timberland boots. He smiles.

It’s 5:18. I move to another spot in the park. I stand at the stone semi-circle across from North Court.

The R-Line RIPTA zooms up Park Row. It’s a poisonous green. It turns left, onto South Main. There is a group of RIPTA buses behind it. All green.

I see a row of benches near the end of the park. Three or four populate them—a sea of military khaki and skullcaps. They are homeless; their belongings are crammed into plastic bags from CVS.

I take one last swig of water from my container.

The vendors are packing down their tables. A black woman in a black long-sleeve and fitted Yankee's cap points to the nearest garage.

A child makes eye contact with me. I don’t have either my phone or water bottle to break it. I draw my eyes downward, towards the stones.

The sun is dropping and so is the weather. I have on two layers—a brown pullover with bleach stains on the cuff, over a white tank. I am not dressed for the cold, so I leave.

The pow-wow will resume tomorrow, the announcer says. Maybe I will too. I depart.

SHANE POTTS B’17 dreads the winter and its sapping of melanin.