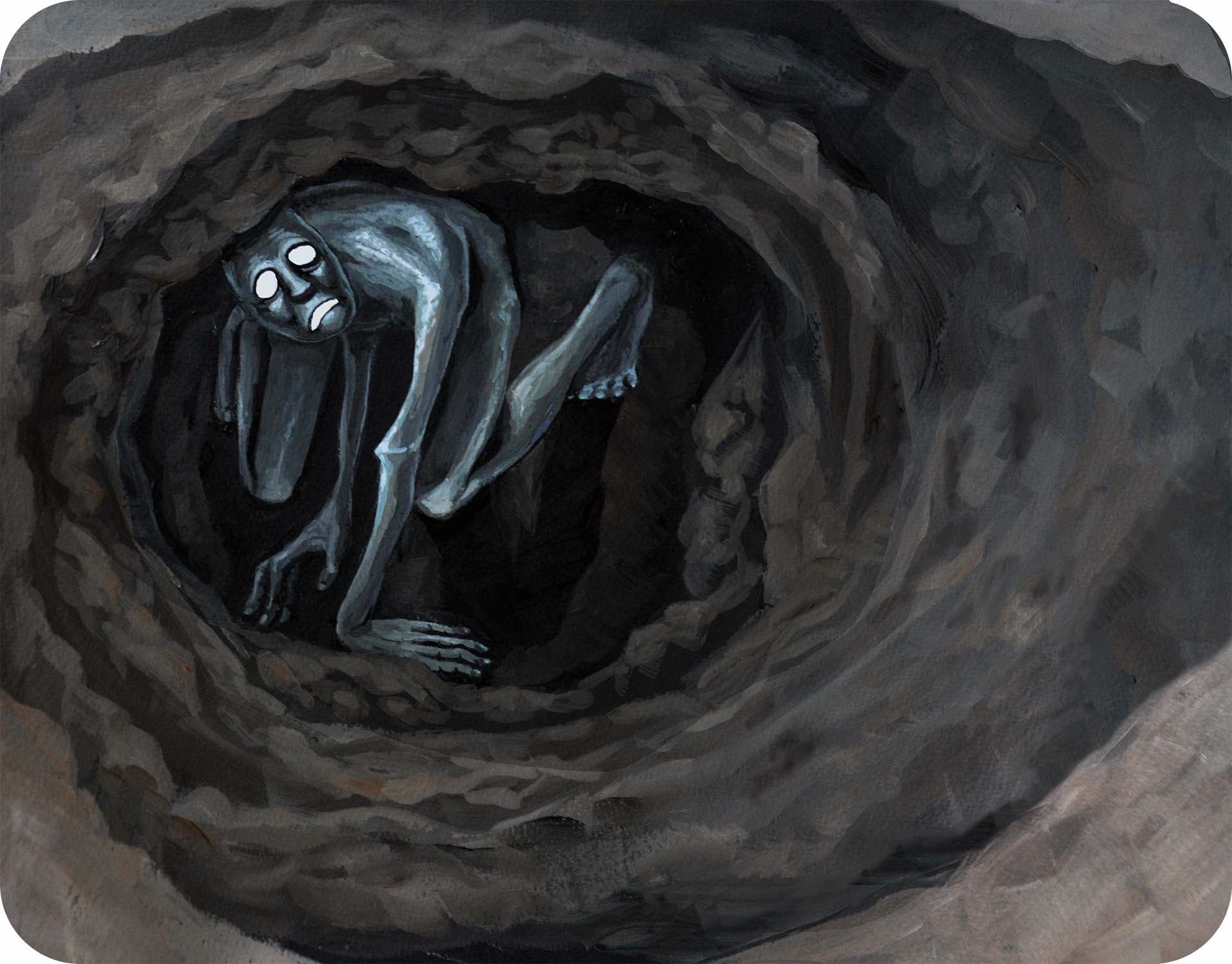 The American psychologist Harry Harlow designed an apparatus called the Pit of Despair, a steely, isolated trough designed to produce, in animals, a deep kind of lonely. He placed young monkeys who had already bonded with their mothers into the pit. After a month, the baby monkeys exhibited the behavior of the “enormously disturbed,” huddling at the bottom of the pit and starving themselves.  After several months, Harlow would reunite the babies with their mothers, who, at best, ignored their offspring. At worst, the mothers crushed their babies’ heads, chewed off their tiny fingers and toes. The point of his experiment was to examine the foundation of a mother-child relationship, to see if love and attachment could overcome extreme isolation. Harlow concluded it could not, proving his hypothesis—otherwise known as a hunch—correct.

Harlow’s Pit of Despair is not to be confused with Prince Humperdinck’s Pit of Despair, a secret murder-dungeon in William Goldman’s The Princess Bride. This Pit of Despair contains The Machine, an apparatus that sucks away life the way one might milk a cow, with pairs of suction cups clamped on the ears, nipples, and stomach. As the dial of the machine is turned up to a higher number, one more year is gulped away. To take revenge on the Man in Black, who won the heart of his intended, Prince Humperdinck inflicts the Man’s body with the highest level of the machine. The Man in Black, his body strapped to a knotted table, seizes up; his back arches into a scythe. He screeches.

Goldman calls this screech the Sound of Ultimate Suffering, dwelling somewhere between the thwack of two boards struck together and the moan of an owl. But I know the Man in Black wails this way not from the soft-rimmed cups clamped to his body, nor the inevitability of his hastened death. Rather, he makes the Sound of Ultimate Suffering because death itself is the undoing of interlocking: a permanent detachment, not from life, but from love.

Many machines claiming to induce in their victims the enigmatic-but-universally-horrifying phenomenon that is Ultimate Suffering deal not in pain, but in loneliness.

On Frogstar World B—the second planet in the Frogstar system in Douglas Adams’ The Hitchhiker’s Guide to the Galaxy—exists the only device capable, in Adams’ multiverse, of generating Ultimate Suffering. The Total Perspective Vortex, as it’s called, was invented by a philosopher to deal with what he saw as his nuisance of a wife, who always nagged the philosopher for having no sense of perspective.

The philosopher, vengeful, invented a device capable of revealing what perspective entirely meant. He crafted a chamber that, within its walls, allowed a person to, for just a moment, glimpse the whole, unimaginable, and absolute infinity of creation. Somewhere in that astonishing haze one could spot a small speck, so tiny it could barely be seen, which read: You are here.

This shock destroys a person, brain annihilated after discovering how profoundly small and alone she is in the grand scheme of the universe.

The machine destroyed the brain of the philosopher’s wife, when she entered the chamber and saw what she saw. The philosopher’s grief was diluted by the comforting fact that, despite everything, she had been wrong and he was right. This satisfaction lifted him so much that he barely noticed his wife, slipping away in the smear of stars where he now lives alone, free of nagging, like a pin at the center of the universe.

Varun could hear the books cricketing to him while he walked amongst them, whispering, waking them up with a stroke along each spine. He did this every morning, while the sun climbed into its place above the horizon. He lived alone in a bookshop with only the company of his books, which spoke to him in a dark language. Varun had never been outside, never seen nor felt the sun. He had only read about the dawn, the emptying of light into the sky.

If you want to write the next paragraph of this story, write it. Then send it to [email protected] and, if we tingle along the spine, we will publish it in the next issue of the Indy.