Cult of the Kempt

Lawns of the Suburban Imaginary Under Threat 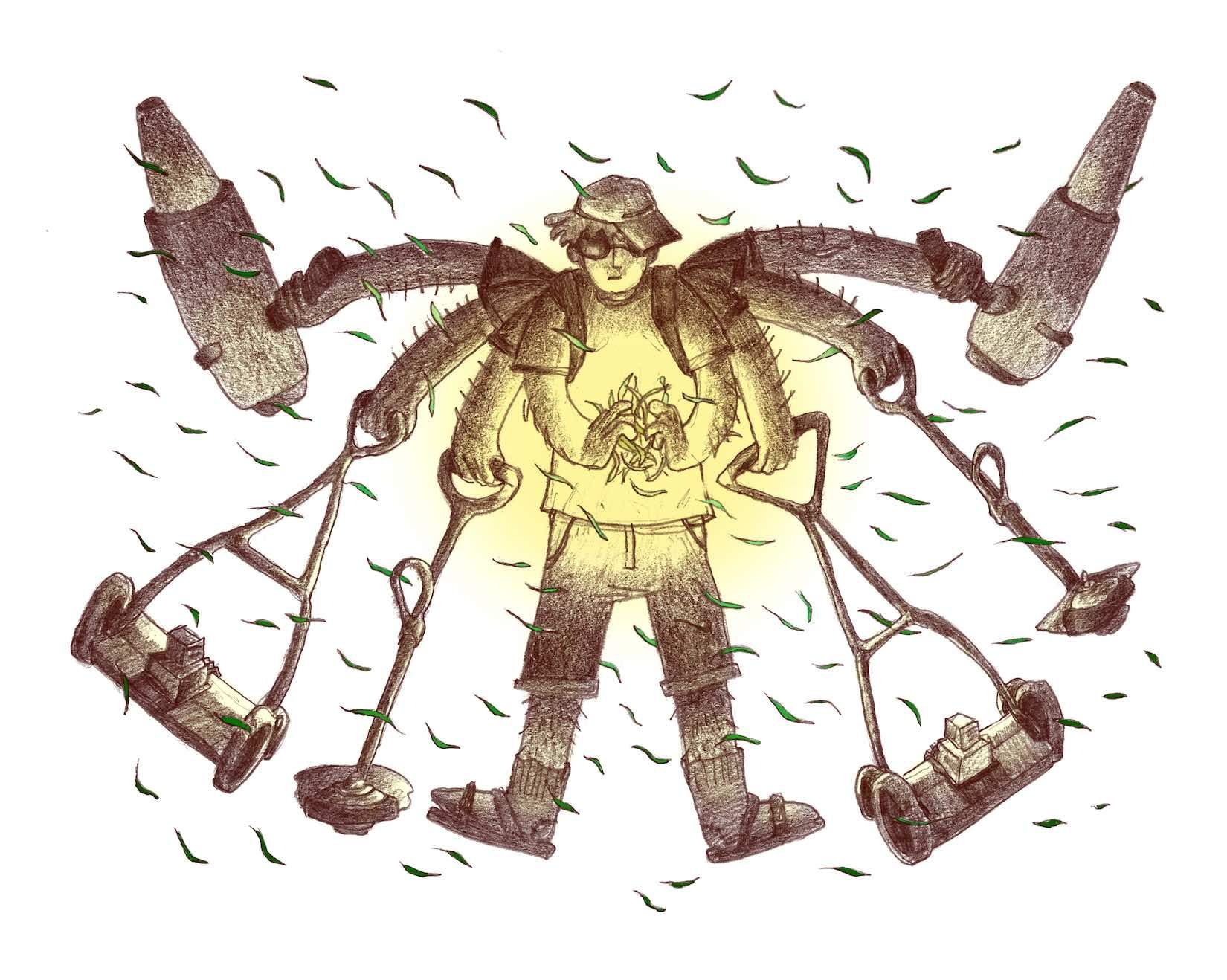 We mowed them shaggy at college rentals mid-town; tightened edges on the winding subdivision drives; begged the truck to keep speed on the highway to the exurbs, as it sagged under grass and machine. Each week, the bluegrass grew back, until the sun outpaced it and burnt it crisp. Your correspondent spent this summer maintaining the clean, green carpet that has become a ubiquitous feature of the American landscape. Landscaping crews, like the one that employed me in Fort Collins, CO, are kept busy with supermarket lots and school grounds, as well as on single family yards, golf-courses, and parks. Even the dead are afforded their well-kempt turf, though they must appreciate the throb of the mower from six feet below.

Americans adopted the lawn from English estate gardeners, under the guidance of landscaping gurus like Frederick Law Olmstead in the mid-nineteenth century. As a key component of the suburban residential model, early lawn schemes were reproduced nationwide as suburbs multiplied. In the century-and-a-half since it arrived in full force, the lawn has grown at a faster rate than any other ecosystem on the continent. It wasn’t until the mid-twentieth century that the lawn came under serious reconsideration. Among the many questions voiced about the idyllic suburbia at that time was the one Michael Pollan delivered in the title of his 1989 New York Times article, “Why Mow?”

Pollan himself admitted to mowing as a matter of conformity. He delivers a tale in which his father was tacitly lobbied against, then aggressively confronted, by his neighbors neglecting his lawn. This strong pressure to conform suggests that lawn ownership can be considered a cult. Janja Lalich, an expert in cultic studies, writes that a cult is characterized by “concerted effort at influence and control.” In the case of the lawn, this influence is exerted at two levels: first, by the society on its members, and then by the members on the grass. An individual may be seen as displacing the insecurity of being controlled through the enactment of control—a sequence commonly identified with bullying. Perhaps this accounts for the cultural inertia of the grass habit.

Numerous writers have elaborated other causes for this American obsession. Ecologist John Falk proposed a “Savanna Syndrome” established during Homo sapiens’ evolution on Africa’s grasslands to explain our love for the artificial meadow. There is also cause for a critique of a culture in which mowing falls on a list of male domestic tasks that include flipping one’s meat on a grill and wielding power tools. Philosopher Yi-Fu Tan theorized the lawn as a form of pet, akin to the dog that also populates the classic nuclear household. However, intimate attachment to a pet typically inspires an intimate awareness of its needs—an awareness absent among proprietors who hire out for lawn care. Such absentee ownership is tantamount to keeping the dog always kenneled, with its picture on the fridge.

Could it be that our attraction to lawns is based in a drive beyond a love of the turf itself, beyond the horizon of grass, deep into the psyche: the urge to subdue the unkempt and manifest order. Order certainly describes the nuclear suburban imaginary in which the lawn fits. Professor Philip Zimbardo, famed orchestrator of the Stanford Prison Experiment, pointed to this conclusion when he wrote, in 1969, that “consistency is a safeguard against chaos” and that it must be pursued “for the individual to maintain a conception of himself as a normal member of society.” In the face of a fiery tide of “mass hostility, aggression, and inhumanity,” with contemporary youth flooding Haight-Ashbury in San Francisco to chase their “high in the sky” and Civil Rights protesters taking to the streets, Zimbardo prescribed conformity on all fronts. On the sprawling battleground of the suburb, consistency manifests in a uniform, three inch green blade; in its endless repetition, men like Zimbardo saw the sanctity of the nation.

Lawns are not merely benign symbols; they play an active role in establishing order. They are, in effect, a tool for the preservation of residential segregation. It costs roughly $300 dollars a month to maintain a lawn in the US—more if you don’t mow it yourself—and homeowners' associations and even municipalities can freely dole out fines for unkemptness. This means that inability to maintain a lawn can bar residents from homeownership on the basis of their disposable incomes. This represents a real barrier; yet, amidst the crusade against racial segregation in American housing, the mowers drone on under the radar. So the disenfranchising patterns of suburban order, adored by Zimbardo in his time, continue on, omnipresent, across the breadth of our built environment.

Behind the white picket fence, the exclusivity of expense makes the lawn a useful ploy for social status. Lush sod is a conspicuous a display of consumption, exaggerated by its material pointlessness. The pretension reaches full pith in the form of lawns amidst urban density, where sod is reduced to a strip not more than five feet wide and ten feet long, girding the base of a classy apartment building. These, like those enfolding 7-Elevens and prisons, are but token displays of abundance through the language of conformity.

The cult exerts such strong powers of retention that one can scarcely blame the average participant. Many mowers would like to quit, but can’t, for fear of ostricization. People who find themselves living with a lawn they can’t take care of, but to which they are bound, often feel trapped. Maintenance costs quickly become a burden when circumstances change, as with the suddenly unemployed, senior citizens, and the ill. Our customers included sufferers of strokes and dementia, often living alone in distant ‘burbs voided vibrancy by dead-ends and speed bumps meant to preserve tranquility. To such residents, the lawn represents a manacle. An old man without money for proper medical care had us mowing halftime, but couldn’t let the service go. His homeowner’s association had approached him a few years before.

Of late, the environmental cost of lawns has been cast in sharp relief. The EPA reports that 100 million pounds of chemicals are deployed in America’s lawns annually. A tremendous amount of gasoline feeds the machinery of mowing crews, who have made lawn-care a multibillion dollar industry. In addition, more than 10,000 gallons of water are required to bring a typical third-acre lawn through the season. Homeowners’ lawn practices have been implicated in California’s ongoing drought, and governments are now reacting with tight sanctions on water use. The Los Angeles County Water District is now offering rebates to those who will rip up their lawns­—and many have. Others are clinging to their grass: reports have surfaced of lawns being spray painted green, a desperate act likely to kill the organism beneath. In Fort Collins, the suburbs have grown thick with California’s wealthy migrants, who have come seeking a more tolerant watering regime. Careful disuse of grass in their private yards has been uniformly sanctioned.

But many active uses of the grass, especially on public property, draw a skeptical eye from law enforcement. Communing for too long with the bluegrass has resulted in violent clashes; police routinely crack down on groups of homeless people for staying too long in Fort Collin’s small downtown park, resulting in property seizure and injuries. There are right ways and wrong ways to relate to the grass—to maintain it is essential; to sit for too long atop it can be criminal.

Some Californians will flee to continue their lawn mowing practices. Others will be won over by the growing practice of xeriscaping, with which water-wise homeowners increasingly replace their grass. Xeriscape design takes climate into better account by using drought-tolerant plants—those who replace their turf with xeriscape can expect to reduce their watering by about a third. While this is good news for the hydrologic cycle, and bad news for the ambitions of bluegrass, it does not necessarily offer an escape from the cult of the kempt. If it is order that underlies our allegiance to sod, then might not the cult be better served by switching to a more durable medium? Patterns of mulch and groundcover placement in xeriscape design are increasingly codified, and there is hope that drought-conscious plantings may yet allow the suburban vision of control to carry on amended, but still whole at the root.

For those who would prefer neither of these options, now is a wise time to act. The drought has caused an upset at the temple, and a ready-made task force of hardened mowers await redirection—they have shown themselves responsive already, with new firms offering to rip up lawns for free in exchange for collecting the LA rebate, and in the form of mobile gardeners who cultivate veggies in backyards for a share of the produce. A quiet battle is being waged, one that the lawn, even sun-baked and thirsty, may yet win. The cult that maintains it has on its side both softness underfoot and familiarity to the eye. For now:

LANCE GLOSS B’18 fought the lawn and the lawn won.