Trump, The Apprentice, and the Labor of Reality TV 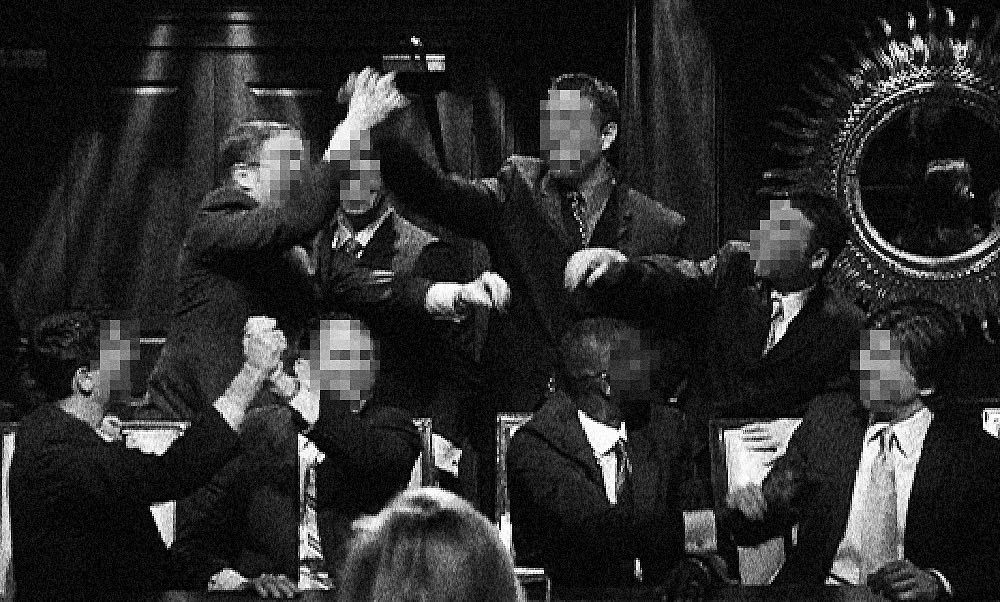 As a helicopter emblazoned with the Trump logo veers over a rendering of the New York City skyline, the O’Jays sing “For the Love of Money” and the screen begins to flicker with stock footage of luxury brands, the NYSE ticker, obscure currency, and the aphorism now synonymous with the show itself: “It’s nothing personal. It’s just business.” Watching the opening sequence of The Apprentice, with its exhausted images and banal expressions, it’s not hard to feel that the show is entirely depthless. In fact, in many ways, the show itself seems to encourage this reading. In the pilot episode, contestants and viewers are rewarded with a tour of Donald Trump’s gaudy penthouse apartment replete with ornate furniture Trump gleefully admits to never having used. This shallow exercise is followed by painfully prosaic advice from Trump, instructing us to “work hard and have fun.” In later episodes he’ll inform us that “without respect you cannot be a leader” and that “you have to fight for yourself.”

Even though these messages are directed towards the audience in Trump’s episodic asides, they are designed to aid the arc of the storyline far more than they are to provide any insight for hopeful entrepreneurs. All of these moments, it seems, are laiden with the tacit understanding that what is being presented is purely entertainment and shouldn’t be taken too seriously. This apparent shallowness isn’t lost on the show’s critics, either. As Tom Shales writes for the Washington Post: “There's so little happening in The Apprentice … that it's hard to work up an opinion about it.”

Yet, after nearly 200 episodes, as the show’s future is wholly unclear—amid a turbulent transition between Donald Trump and an as yet-unnamed successor—it might serve us to look under its glitzy surface and attempt to locate it in a broader political context. Let me be explicit—I have little interest in whether the show functions as a political platform for the ideologies of the left or right. Rather, I’m interested in the show’s ability to reflect the state of labor today, and to determine what that state is. While any cultural object could be asked to perform this sort of cognitive mapping, The Apprentice—already deeply politicized for other reasons—seems to offer itself as a primary candidate.

In an early episode of the first season, Trump attempts to disprove the real estate mantra, “location, location, location,” by instead telling the audience that “the people behind a deal are much more important than its location.” This belief is enacted by The Apprentice, as it spills out across New York, momentarily setting up tasks and scenarios in discrete locations only to pick up and move on once again. At a moment’s notice, a contestant may find himself sent to work in an airplane hanger, a restaurant’s storeroom, or the backseat of a minivan. One’s workplace is wherever one is at that moment. In fact, a major conceit of the show centers on contestants’ abilities to adapt to a rapidly changing work environment. Allowing one’s unfamiliarity with the terrain to impede one’s success is often cause for firing; in the first season alone, Heidi, Kirsti, and David all struggle to adapt to their temporary environments (a pedicab dispatch, an open air flea market, and a South Street Seaport lemonade stand, respectively) and are all subsequently fired. In the world of The Apprentice, though, it is not only the workplace that is fungible—the tasks that the teams are asked to perform change with each episode. At one point the objective may be to sell the most cups of lemonade; at another, it may be to design the most appealing ad campaign for a Trump casino. While these labor conditions can be found on numerous reality TV shows, where environments and objectives are constantly in flux, they also speak to the precarity of most post-Fordist labor, televised or otherwise.

In The New Spirit of Capitalism, Luc Boltanski and Ève Chiapello sketch out the contours of the late capitalist work ethos, arriving at a description of the employed entrepreneur or “great man,” whose “versatility and adaptability … make him employable.” Not only are these qualities of fluidity and flexibility visible in The Apprentice’s more successful contestants, but the show also helps us visualize another facet of Boltanski and Chiapello’s critique. In using terms like “the great man” and “adaptability,” Boltanski and Chiapello lift jargon from 1990s management texts. This clearly hints towards the fact that underneath all of the local autonomy an entrepreneur may possess, she’s ultimately informed by and beholden to the character and whims of “the Firm,” “the Transnational,” or “the Corporate.” This hint is visually concretized in The Apprentice, a show in which the setting (the front of the house at Planet Hollywood, the auction floor at Sotheby’s, the R&D department at Pepsi) is always the show’s sponsor and always corporate. Though its contestants are freed from the panoptic mansions that dominate reality TV, they are in fact fettered to the far more pernicious practices of product placement and corporate personhood.

The contestants of The Apprentice are ensnared not only by these corporatized locations, but also by the rules and schedule of the show itself. When they’re not at a task site, the contestants are allowed to rest at a suite in the Trump Tower. And even here the contestants are still, in a way, on the job. Of course, one could make the argument that for a contestant’s entire stint on the show they are “on the job,” endlessly working as performers for the viewing audience. Yet the contestants are incapable of punching out in another sense. At seemingly any moment, the suite’s red telephone could ring, promptly summon all the contestants to some exotic (and often unannounced) locale and return them to work. In this way, they find themselves unable to ever truly clock out. By the show’s third episode, a scrawny, middle-aged contestant named Sam finds the conditions unlivable and chooses to take a nap in the midst of a project. By the end of the episode, Sam is fired. This case is not an exception—often during the elimination process in the boardroom, teammates accuse one another of falling asleep or malingering during tasks in an effort to win Trump’s favor and avoid being fired. Though the show’s participants are asked to be “creative risk-takers,” as Donny Deutsch tells them in the second episode, when and where they are allowed to take creative risks is entirely out of their control.

A similar situation appears in modern-day managerial labor in the US, where the business day has long been 24 hours. As Benjamin Kunkel writes on the state of the American workforce in his essay “Full Employment,” this endless workday, at once the upshot of the global economy and connective technology, leaves white-collar workers “perpetually on call in a way formerly reserved for doctors and firemen.” Much like the contestants of The Apprentice, modern workers—tethered to the fluidity of the workspace and the demands of the corporation—find themselves responsible for work long before 9 AM and long after 5 PM. Kunkel continues that it “goes almost without saying that the celebrated ‘flexibility’ of the US labor market is an honorific for casual dismissal,” In other words, the term shrouds what is blatant exploitation.

Work hard and have fun

Understandably, one may object to the comparison drawn between game show contestants and exploited labor. After all, isn’t there endless footage of these people drinking champagne and eating caviar? The show hardly seems exploitative as it whisks away contestants on a private jet for an elaborate dinner in New England. For all of this supposed labor, it’s wholly unclearly whether or not the contestants are really just at play. At its crux, the show, like any reality TV show, is an invented competition in which one strives to complete objectives and win prizes. As such, it can seem totally removed from the unfortunate reality truly exploited workers face.

And yet, even here the logic of The Apprentice neatly coincides with post-Fordist labor practices. This blending of play and work, what’s often called gamification, or, to borrow Alexander Galloway’s term, ludic capitalism, plays a crucial role in “the new socio-economic landscape, in which flexibility, play, creativity, and immaterial labor… have taken over from the old concepts of discipline, hierarchy, bureaucracy, and muscle.” Whether it’s the work of gold farmers—gamers who tirelessly accrue in-game currency on World of Warcraft or Runescape to trade it in for real-world money—or the labor conducted by internet users who unknowingly help Google design more effective advertising through their comments and posts, the line between work and play has never been more blurry. The Apprentice pushes this one step further, grafting the logic of games and child-like competition onto the entire corporate experience. For all the fun we’re having watching it, one gets the feeling that something a little more serious is happening underneath.

JONAH MAX B’18 wants to make The Apprentice great again.