Stuffed to the Gills

An amateur dissection of taxidermy 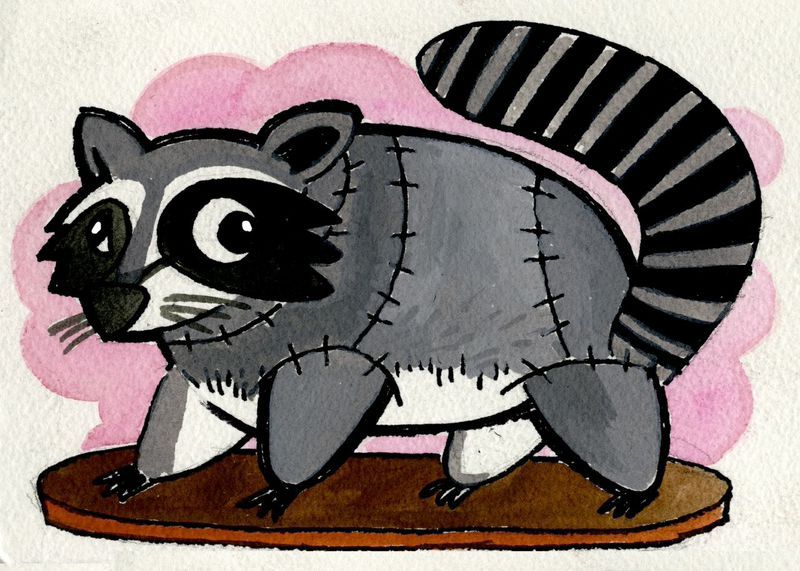 In Alfred Hitchcock’s Psycho, the protagonist pulls up to an empty motel and has an unsettling dinner with its owner—the infamous Norman Bates—in his neighboring mansion, the parlor of which is covered wall-to-wall with stuffed animals. The beady eyes of his extensive taxidermy collection stare at us through the screen, and we are supposed to shudder. Taxidermy has become a lazy trope, a kind of shorthand that urges us to suspect that something isn’t quite right, that maybe there's a psychopath in our midst.

Taxidermy has long occupied a rather grim space in our cultural imaginary. It's a practice reserved only for avid hunters or the mentally disturbed. Yet the true story is certainly more complicated, for taxidermy inhabits a compelling liminal space between science and art, disgust and intrigue, life and death. Perhaps there is something deeper under that layer of fur, feathers, and skin.

John Hancock (the English ornithologist, not the American founding father) is largely considered to be the father of modern taxidermy. While taxidermy was practiced in Europe before Hancock’s birth in 1808, its implementation was rather crude—animals were simply gutted and stuffed with cotton or straw, leaving their bodies to rot—and the practice existed largely outside of public view. While methods slowly improved over the years, it was Hancock who ushered in a veritable golden age of taxidermy, elevating the custom from a niche scientific interest into a bona fide art form.

As an ornithologist, Hancock was an avid collector (read: hunter) of birds, which he then preserved and modeled with a previously unparalleled sense of artistry. Although Hancock may have originally been drawn to birds as a result of his interest in the natural world, the artistic potential of the medium soon began to seep in and overtake his work. One of his most famous pieces, entitled “Struggle with the Quarry,” depicts a heron being viciously attacked by a falcon with its wings outstretched in elegant fury. This work, along with a number of other mounted bird tableaux, was exhibited at the 1851 Great Exhibition in London. The Great Exhibition was intended to be a display of the scientific and artistic progress of the mid-19th century and thus provided critical exposure to Hancock’s grotesque practices, which hovered somewhere between art and science. The public was smitten with the work. A judge at the exhibition even remarked that Hancock’s series “will go far towards raising the art of taxidermy to a level with other arts, which have hitherto held higher pretensions.”

Hancock’s well-received avian creations were part of a larger cultural current in which taxidermy was slowly coming into vogue within the nineteenth century British mainstream. It was common for middle-class Victorian homes to be ornamented with stuffed birds as a symbol of good taste. Even Queen Victoria herself was rumored to have accumulated quite an impressive collection.

Nowadays, taxidermists are largely not considered to be artists, but sadists who derive perverse enjoyment from exploiting the death of innocent animals. This is why a contemporary audience would likely be shocked by the fact that the man who was once the chief taxidermist at the United States National Museum at the Smithsonian has also been called one of the fathers of the American conservation movement. William Temple Hornaday eschews the modern image of the taxidermist-as-sadist, and instead proposes an alternative history in which taxidermy is closely linked with deeply held views on environmental ethics and education. Hornaday, who was born in 1854, lived to witness the almost complete effacement of the buffalo population in the American West. The buffalo’s previous status as pest waned to the point where individual buffalo deaths began to be reported by national news sources. Perturbed by the sweeping demise of the species, Hornaday planned a trip to Montana with a plan to kill more than a dozen of them.

Hornaday’s logic may seem backward to those of us who grew up in a time when environmental responsibility is principally manifest in the act of recycling cardboard or turning off lights; however, the act of killing was, for Hornaday, deeply entwined with a conservational ethic. In a biography about Hornaday, Gregory Dehler wrote that he was both “one of the greatest American conservationists,” as well as someone who “probably killed more endangered animals worldwide than any other single person of his generation.” While these kinds of contradictions may make us uncomfortable, Hornaday was unwavering in his belief in the educational potential of taxidermy, consequently imbuing his creations with the conviction that they would be immortal, eternally proclaiming the glory of the American wilds. With the imminent extinction of the buffalo, Hornaday perhaps saw taxidermy as a way to proclaim that these animals were worth saving while also preserving them for future generations who may not have the chance to see the creature alive. In this sense, Hornaday perhaps believed that taxidermy could be a way to combat what psychologist Peter Kahn has called “environmental generational amnesia,” a phenomenon in which each generation becomes accustomed to their environment and thus forgets how much it has changed and (likely) degraded since the past. Hornaday’s taxidermy creations, however, wouldn’t let us forget.

Today, taxidermy is no longer confined to the space of the Natural History Museum or the hunting lodge, but is beginning to seep slowly into urban spaces filled with hip 20 and 30-somethings. D.I.Y. taxidermy is practically replacing microbrewing and beekeeping as the newest hipster trend. And one doesn’t have to look far to find a make-your-own taxidermy kit or classes aimed at teaching you how to, say, preserve that road kill you passed the other day. While there are a plethora of online forums and video tutorials, formal workshops are springing up in cities like London, Chicago, and New York. A workshop called “Fancy Chicken Taxidermy Class” at the Morbid Anatomy Museum in Brooklyn will cost you $400.

The reasons why young urbanites are drawn to taxidermy are many: some view it as an artistic practice, others as a kind of spiritual return to the environment, still others as a bold fashion statement. Nonetheless, many young D.I.Y. taxidermists are quick to point out the moral foundations of the seemingly taboo process. Firstly, the animals that are used by these practitioners are either found dead or have died of natural causes (there are a shocking number of small businesses centered on preserving dead pets). Making your own taxidermy, they insist, is the only way that one can assure the animals being used are sourced ethically. In an article for The New York Times entitled “A Kinder, Gentler Taxidermy,” Allis Markham, an assistant in the department of taxidermy at the Natural History Museum of Los Angeles, frames this argument within the well-trodden discourse of factory food production: “Just like the meat I eat, the animals I use for my taxidermy can’t have been raised in an industrial way.” Later in the article, 23-year-old self-taught taxidermy instructor Mickey Alice Kapwis declares, “I have a lot of vegans in my classes.”

D.I.Y. taxidermy also fits within an ethic of avoiding waste. Kapwis explains how along with more traditional forms of taxidermy, organs can be preserved in jars, and bones can be used to make jewelry or otherwise ground up to be used as fertilizer. While clearly appealing for its shock value, this macabre hipster trend seems to have a solid moral backbone. And it probably won’t be long until we see horn-rimmed glasses made out of, well, horns.

In 2012, the Dutch artist Tinkebell created a work called “Cupcake—My Little Pony,” which consisted of a taxidermy horse wearing 3D-printed roller skates and cartoonish eyes pasted onto its face. The piece was exhibited at Art Rotterdam in the Netherlands during February of this year, and was met with much criticism.

The use of dead animals is nothing new in the art world. Damien Hirst’s creations suspended in formaldehyde are but one (rather pricey) example of the growing genre. And like others who opt for this morbid medium, Tinkebell has received a great deal of criticism for her practice. When, in a previous project, she made a purse out of her own dead cat, the artist received so many hateful comments that she published them as a book entitled Dearest Tinkebell. The book contains such passages as “I HOPE YOU GET MADE INTO A PURSE GO TO HELL FREAK,” or the more eloquent “IF I KNEW WHERE YOU WERE I WOULD BURN YOU, LOCK YOU IN A CAVE, AND WATCH YOU SUFFER SO THAT YOU WOULD KNOW WHAT IT FEELS LIKE TO GET YOUR SKIN RIPPED OF STRAIGHT FROM YOUR SKIN!!!!!!!”

But Tinkebell’s hate-inducing and arguably disturbing taxidermy creations are built around deeply-held ethical concerns. In an informal interview with Justus Bruns on YouTube, Tinkebell explains that “Cupcake—My Little Pony” is a part of a larger project in which she is making toys out of real animals as a means to shed light on the industry of creating perfect animals. The artist cites the act of breeding dogs and the creation of hypoallergenic cats as examples of the ways in which our society has adopted a factory model for creating what she calls “perfect pets.” Critics of the work, however, are clearly not considering these issues when they view her artwork. Interestingly, Tinkebell’s controversial methods resonate with a longer legacy of taxidermy as a mode to express concerns about the changing place of animals while simultaneously presenting them in an artistic manner. Yet the fact that these concerns are still being overlooked may come as no surprise. In the end, it might be hard to get over the fact that what you’re looking at is just a dead animal.

JAMIE PACKS B’17 is definitely not a psychopath.