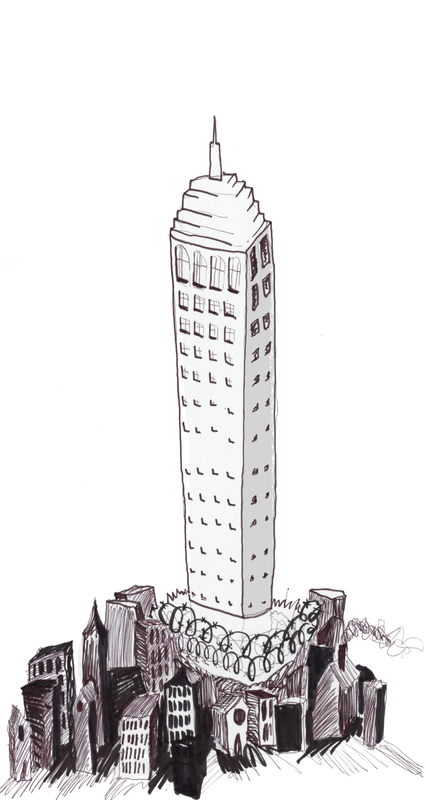 Samuel R. Delany’s 1975 science-fiction opus Dhalgren takes place in and on the outskirts of Bellona, a mysterious city in the American Midwest. The phones and televisions don’t work there, and the city is, somehow, permanently on fire. Before the book begins, in a sequence of events hinted at but left unexplained (as much in Dhalgren is), something catastrophic happened. The police force, the municipal government, and the majority of citizens have fled, leaving Bellona what some might call lawless.

But as a social entity, the city isn’t as cutthroat or terrifying as the idea of lawlessness might imply. While violence is not uncommon, modes of life forbidden or discouraged by the codes of other American cities flourish. To take one example: our main character, an amnesiac known only as The Kid (or “Kidd,” for a spell) establishes a romantic partnership with a woman named Lanya fairly early in the narrative. But around the book’s halfway point, the couple absorbs a young man named Teddy and becomes a remarkably successful ménage à trois. (There’s a lot of sex in the book, in terms of both amount and variety, which might explain in part why it sold over one million copies in the seventies.)

Questions of urban life and the nature of the city play a part in much of Delany’s most prominent work. (And there’s a lot of it—he wrote his first published novel when he was nineteen, and he wrote and published eight more in the next six years.) A lifelong New Yorker, it might be more accurate to say that Delany has been more specifically concerned with the ways cities can contain and support different kinds of people and modes of life. What would a truly democratic urban life look like? Delany’s writing has always had a political bent—himself black and gay, he wrote his first science-fiction novel when his then-wife, poet Marilyn Hacker, expressed her frustration at the genre’s dearth of compelling female leads. In an essay appended to his novel Trouble on Triton—written and published immediately following Dhalgren—he explains that science-fiction interests him because it expands the realm of what can be meaningfully said. He compares the genre to atonal music or abstract art: when you discard conventional rules, expressive and imaginative possibilities emerge.

Trouble on Triton’s subtitle is “An Ambiguous Heterotopia,” after a concept by French philosopher and social theorist Michel Foucault. As Foucault writes in his essay “On Other Places,” heterotopias are places, like boarding schools, psychiatric hospitals, and ships, where things which exist in “normal” culture are “simultaneously represented, contested, and inverted.” That is to say: as in Dhalgren’s Bellona, people and events and things from the world outside the “heterotopia” show up there, too. They just mean something different inside. Trouble on Triton’s largely romantic action is initiated when our main character, Bron, takes a new way home from work, cutting through a section of the city that the police have given up policing towards the end of broader municipal order. In the interest of the performance, they dose him with psychotropic drugs, and he falls in love with the lead actress.

In Triton, the lawless city is on the margins of the city proper; but Dhalgren’s Bellona is in the American Midwest, right in the heart of the country. Dhalgren is, in large part, an exploration of this inversion. The resulting urban landscape, while certainly not without its dangers, is less wild than it seems at first, both to readers and to the Kid; it leaves room for entirely different systems of value to emerge. In one memorable subplot, the Kid goes to work cleaning for the Richards, a delusional nuclear family living in an abandoned apartment complex; he quits when he realizes he doesn’t actually need the money they’re paying him, because there is nowhere in Bellona for him to spend it. (And when the Richards’ daughter pushes her brother down an elevator shaft—tellingly, perhaps the book’s single most shocking moment of violence.)

But for all the book’s experiments—and Dhalgren is as formally inventive and experimental as any of the big-name 20th-century postmodern novels—the thematic and narrative backbone of the story is a rather conventional one. In essence, it’s a kunstlerroman, or narrative of an artist’s development. The Kid learns in Bellona that he wants to be a poet; by the end of the book he has written, published, and grown dissatisfied with his first book of poems. The book contains a number of lengthy intellectual conversations with a broad cast of interesting characters, including astronauts, prostitutes, and book publishers; and the Kid changes and grows substantially from the novel’s beginning to its cyclical end. Which is to say that in—and from—the chaos of the city, he has received an education.

Delany’s Times Square Red, Times Square Blue, a 1999 collection and revision of two earlier essays, attempts to describe and explain the major redevelopment, begun in the late 90s, of a single block of New York City’s Times Square. The block (42nd Street, between 7th and 8th Avenue) was home to a wide variety of businesses and people—most significantly, at least for his first essay, a number of pornographic theaters, often screening heterosexual porn, which attracted men seeking gay sex. The book’s first essay is largely devoted to a memoiristic description of how those theaters operated, of the social worlds they constituted and contributed to. Its second was originally conceived as an academic lecture; it pans out from Times Square specifically to look at cities and urban development more broadly.

This second essay, called “…Three, Two, One, Contact: Times Square Red,” can be read as an attempt to more or less systematically understand, towards the ultimate end of shaping policy in the future, what exactly will be lost when the “Forty-Second Street Development Project” transforms the block into a space for high-rise office buildings (as it has now). “The primary thesis underlying my several arguments here,” he writes at the opening of the essay, “is that, given the mode of capitalism under which we live, life is at its most rewarding, productive, and pleasant when large numbers of people understand, appreciate, and seek out interclass contact and communication conducted in a mode of good will.”

Explicitly following Jane Jacobs’ study The Death and Life of American Cities Delany describes contact as a “fundamentally urban” kind of encounter: more or less random, between you and the people you happen to be sharing space with. Conversations and interactions between people in the supermarket or on the street, with neighbors or librarians—in an ideal urban setting, this kind of contact is broadly desirable and, more importantly for Delany’s thesis, occurs regularly across classes. (Class, too, he means more broadly than simple socioeconomic standing; an example of cross-class contact he gives later in the essay is an experienced writer meeting an up-and-coming one.) This is why the movie theaters were, if far from perfect or utopian, nevertheless spaces that fostered interclass contact.

He distinguishes contact as a mode of human interaction from networking, which occurs more intentionally and is based on preexisting, shared interests. The example he gives of a networking function is the writers’ workshop. While contact and networking aren’t fully separable, one important difference “is that, in networking situations, the fundamentally competitive relationship between the people gathered in the networking group is far higher than it is in the general population among which contact occurs.” For example: when riding a public bus, the resource we are there for (space on the bus, in order to get somewhere we need to be) is—barring exceptional crowding—generally not sparse enough to put us into competition with one another. In a writing workshop, on the other hand, everyone is trying to get published. Because of this, he argues, interclass contact is where most useful interaction occurs.

The contemporary liberal-arts university gathers students together, pretty explicitly, in the interest of a kind of networking. Whatever the resources are that its students are competing for (jobs? an A? …money?), they are generally represented to us as finite, zero-sum. Sometimes they are—A’s on certain kinds of grading curve are; certainly money is. But knowledge, as such, is far closer to the opposite: the more those around me know, the more I know, and vice versa. Because these different kinds of goals—the finite and, for all intents and purposes, the infinite—coexist under the same umbrella of “university education,” the network that is the university creates the illusion in its customers that we need to be competitive with each other. Which, sure, sometimes we do: but we don’t need people in class discussions contributing like class is something to be won. (This happened even in my public high school; the resource, I suppose, was college admission.)

In spite of what sometimes seems its best efforts, Brown University exists within a specific urban context, that of Providence. The university expends a great deal of energy attempting to prevent potentially unwanted contact between students and that context. In campus tours, for example, tour guides speak of the city (“the downtown”) as a resource to be used if desired, not as the situation in which anything that happens at school necessarily also happens. Many of the campus’s ostensibly public resources, like the libraries, require card-swipe access to enter after a certain hour.

And when protestors disrupted New York City police commissioner Ray Kelly’s invited lecture last year, a thread of conservative commentary on campus framed the issue as though unruly Providence citizens were undermining Brown’s ability to pursue free intellectual inquiry. (Many of those instrumental in leading the protest were members of Providence organizations committed to racial and economic justice, such as Direct Action for Rights and Equality. And many, of course, were students.) The understanding that Providence somehow failed Brown itself fails to take into account the fact that the policing and political strategies required to preserve Brown’s elite status further undermine the physical and economic safety of many of the city’s already marginalized residents.

But Delany’s thesis goes deeper than this. In Dhalgren, as in Delany’s New York, interclass contact is not merely convenient or pleasant: it is the site of both opportunity and tremendous meaning. He gives a number of mundane, recognizable examples, like throwing out his broken vacuum cleaner only to meet someone in the post office ten minutes later selling his; on the other hand, he describes that he met and befriended his current long-term romantic partner, Dennis Rickett, when Rickett was homeless and selling books.

While, in a number of deeply important senses, the student body of Brown University spans classes, it also serves to create a class of its own, with its own goals and blind spots. And the idea that the university effects a retreat from society in order to pursue its goals is a myth, and a harmful one. Brown is no more separate from its local, national, and global context than other organizations and corporations are, from Planned Parenthood to Goldman Sachs.

So what would it mean to foster interclass contact in a Providence with Brown present? It seems to me it would require a radical revamping of what the university understands its own place in the city to be, and what it considers the aims of its instruction. What if Brown classes could be taken affordably and for credit by everyone in Rhode Island? Or if university funds being funnelled into fancy dorms and dining halls went instead to open, community-led, Brown-affiliated programs and facilities? Could Brown University open itself up to becoming a site of genuine contact with those with whom we share our city?  Whether possible or not, it seems to me necessary. Because why would we assume that only members of our class have something to teach us?

MATTHEW MARSICO B’15 writes book reviews and other things.