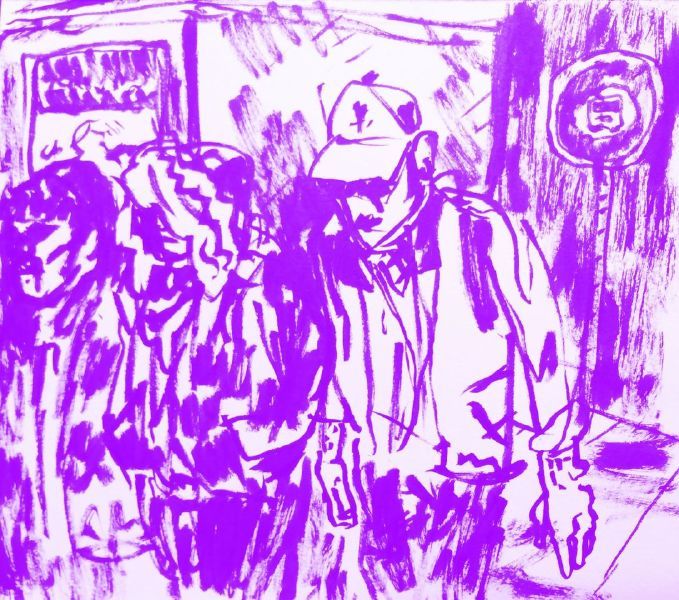 I’ve taken this bus line hundreds of times; once a week to work, half an hour each way, and short trips to the grocery store and to class. I’ve catalogued its tiny details: the illustration of a surprisingly shapely figure on the “Do Not Lean on Doors” sign, the week where the video screens were broken and ads for a Brown University smoking study transformed into glitch art. I remember that the driver of the 4pm bus likes to stop in the middle of Ives Street, get out and go into the corner store, then come back two minutes later with a snack only to find a line of cars honking behind him. I know the RIPTA policy on bike racks, fares, and where you should sit when you have a lot of grocery bags. But I can’t remember consciously noticing the blue sign by the front door, “Security Cameras in Operation/Cámeras de Seguaridad en Operación” until about a week ago, when I knew to look for it.

That RIPTA buses are under surveillance isn’t surprising: video surveillance has been an “industry best practice” for public transit for a long time. But, following the reopening of Kennedy Plaza this January, the question of to what extent riders were being recorded has become a source of public concern. Renovations to the bus hub—proposed by the RIPTA Comprehensive Operational Analysis (COA) and pushed through by Mayor Angel Taveras before he left office—shut down the plaza from July 2014 to January 2015. RIPTA came under criticism for the multi-million dollar plan as the homeless who spent time in KP were displaced, the information office and bathrooms were closed, and passengers had to run between far-flung stops during some of the hottest and coldest months of the year. Many of the temporary stops were clustered on a traffic island close to Burnside Park, where the waiting crowd looked stranded between flows of traffic and the grassy terrain became increasingly dusty and uneven as the summer wore on. It didn’t help that the redesign played into a discourse that the city was simultaneously gentrifying downtown while neglecting parts of its infrastructure useful to the poor. So when Kennedy Plaza reopened on January 17, months behind schedule, a lot of bus riders were ready to hate it.

But the new Kennedy Plaza has its benefits. The elimination of the middle bus lanes makes passing between stops less dangerous, as riders no longer need to weave through traffic to make their connections. The bus shelters are larger, and the screens displaying the next bus’s arrival time eliminate some of the uncertainty endemic to public transportation use in Providence. Along with these visible improvements are surveillance cameras, mounted on lightposts in groups of four at intervals throughout the plaza. They are not meant to be inconspicuous.

On RIPTA’s website, a press release about the renovation catalogues Kennedy Plaza’s exciting new amenities, like bike lanes, ticket vending machines, real-time information, and a farmers’ market in the summer. Under the “safety and security” heading, there’s only an allusion to “upgrades to RIPTA’s security system for the safety of our employees and passengers.” That the improved amenities are described so specifically throws into focus the vagueness of the language describing recent changes to surveillance. There were clearly updates made to RIPTA’s video security system as part of the renovation, but how extensive were they? What changed, and don’t we have a right to know about it?

The American Civil Liberties Union of Rhode Island certainly thought so. On February 2, after being alerted that RIPTA refused to release its surveillance policy, the ACLU released a statement expressing concern about the lack of transparency and calling for the policy’s publication. By state law, the policy needs to be made available, and areas under video surveillance need to be identified by signage. RIPTA had done neither of these things at the time of the statement. In response to the statement, the surveillance policy was made public on their website and RIPTA issued a press release clarifying how the footage could be used. According to the statement, the recordings are kept for “approximately” 30 days and are protected by encryption and a password. The only two people who can view the recordings are RIPTA CEO Raymond Studley and RIPTA Chief of Security James Pereira. In the press release, Studley is quoted saying that “[Pereira] is the only person with access to the recordings.”

But there’s a problem with this: the 30-day limit and restriction to two viewers, even the password-protecting of the footage, appears nowhere in the official surveillance policy. The document, effective since February 18, 2014, is barely two pages long and its rules are completely open to reinterpretation by RIPTA’s CEO. The two concerns the statement addresses—how long the footage is kept and who can see it—are discussed in items two and three under the “Use and Retention” section of the surveillance policy:

2. Unless otherwise required by law or court order, recordings from the surveillance system will be kept for a period of time chosen by the Chief Executive Officer.

3. Only the Chief Executive Officer and Designated Personnel from RIPTA’s Security, Claims, Legal, Human Resources, Transportation and Maintenance Departments may request or view recordings… However, the Chief Executive Officer or his or her designee may authorize additional personnel to access the recordings if doing so would further the purposes of this policy. (Emphasis my own.)

There is a big difference between 30 days and “a period of time chosen by the CEO (unless required by law)”; between access limited to two people and access granted to designated personnel from five different departments, as well as additional viewers authorized at the discretion of the CEO in order to “further the purposes of this policy.” There is also the problem of RIPTA’s delay posting signs in Kennedy Plaza to alert bus riders that they’re being surveilled. In the document, this is expressly against the rules: “Areas subject to surveillance will be identified by signs posted at the entrance to the facilities and vehicles.” Then the policy continues, “By entering the areas subject to surveillance, individuals will consent to being observed and/or recorded by the surveillance cameras present.” Beyond concerns of accountability, this short sentence gets to the heart of why we care about surveillance: that entering public space now counts as an expression of consent to be watched.

Rhode Island ACLU policy associate Hillary Davis, the author of the original statement, feels that RIPTA’s surveillance policy insufficiently protects against abuses of privacy. “If all of the things that they mentioned in their press release are RIPTA policy, like the 30-day limit and who has access to the video, then those things need to be in the RIPTA policy,” she told the Independent. The ACLU would like to see a more thorough revision; making a promise in a press release is one thing, but if the administration were really committed to observing the restrictions on retention and access, they would be written into the official rules. When asked what specifically worried the ACLU about RIPTA’s use of surveillance, Davis said, “We believe that we have a presumption of innocence, that you need to appear guilty before you’re investigated. That is obliterated when you’re under surveillance. I don’t think people realize how much of their day is captured, how much you can follow someone throughout an entire day—every single step can be scrutinized. And I think the people of Rhode Island want their days to remain relatively private.”

Davis’s comment, along with the RIPTA policy statement that entry into space constitutes consent to be surveilled, reveals a dialectic of transparency vs. opaqueness, a practice of surveillance that functions like one-way glass. I understand my act of walking into Kennedy Plaza or boarding a bus as a choice to enter into a social space, a built environment, and an exchange: money for mobility. I don’t view the act of entering that space as an agreement to be recorded, but it is still read as such. Subjective understandings of movement through space only go so far in determining what happens to an individual in those spaces. And the fact that consent to surveillance doesn’t have to be explicit to count as consent is a reminder of that. There are still no signs in Kennedy Plaza alerting users that they are being recorded, but the footage is being taken. The subject in space is rendered transparent while the camera itself remains hidden behind opaque black glass. The system of surveillance can determine what the rules of use are and what qualifies as consent, while the individual is left with the false choice of whether or not to make their body visible—and vulnerable—by entering public space.

Movement through space involves encounters with so many systems outside of individual control, things that do not conform to subjective understandings of what they should mean. So, why is surveillance different? What is specific about its capacity to disturb us? The source of discomfort about being recorded that seems most common is that we don’t know how the footage will be used. It’s an intangible threat, built on dread of something unrealized instead of fear of something that exists. That isn’t to say that the threat posed by surveillance is never realized—it is the suddenness with which being watched can change from intangible to real violence that constitutes our discomfort.

In an editorial by surveillance theorist David Lyon, he writes, “Once, police kept an eye on a specific person, suspected for some good reason of an offence... while such practices still occur, much more likely is the creation of categories of interest and classes of conduct thought worthy of attention.” He views this classificatory function of surveillance as the “phenetic fix,” as in “phenotype,” or “phenomenon”—the determination of what type of thing a subject is through their body’s performance in space. In Lyon’s definition, the phenetic fix is “to capture personal data triggered by human bodies and to use these abstractions to place people in new social classes of income, attributes, habits, preferences, or offences, in order to influence, manage, or control them.”

Lyon’s argument that the function of surveillance is to fix a subject in a category has resonance in the context of the Kennedy Plaza redevelopment, which has been criticized since the beginning by the RIPTA Riders’ Alliance, as well as editorials in The Providence Journal and Transport Providence, as an attempt to keep poor people out of the center of the city. The types of crimes that happen in bus hubs tend to be ‘quality-of-life’ crimes (like panhandling or loitering) instead of violent offenses, and strictly enforcing such minor offenses is a coded way of policing who can access public space. The invisibility of the camera behind the black glass exists reciprocally with the total visibility of a body in space, and the power to record and classify its performance. And it’s clear what the stakes are if someone is placed in a category that does not fit within the official vision of who belongs in the space—harassment, ejection, or arrest.

Experiencing surveillance as purely virtual threat is a privilege of the groups whose use of space is tacitly or explicitly licensed. The discomfort of being a subject of surveillance, knowing that your performance is being analyzed for its appropriateness, needs to incorporate an understanding that the potential threat of surveillance is much more likely to become actual violence for marginalized groups—in Kennedy Plaza, this is especially true for the homeless. The fixing of people into categories requires licensed types of spatial subjects to produce unlicensed types. Which is to say that being surveilled is all of our business: to say otherwise would ignore that the same processes create easy access through space for some and exclusion for others.

Erin Prinz-Schwartz B’15 did Brown smoking study-inspired glitch art wayyy before RIPTA did.