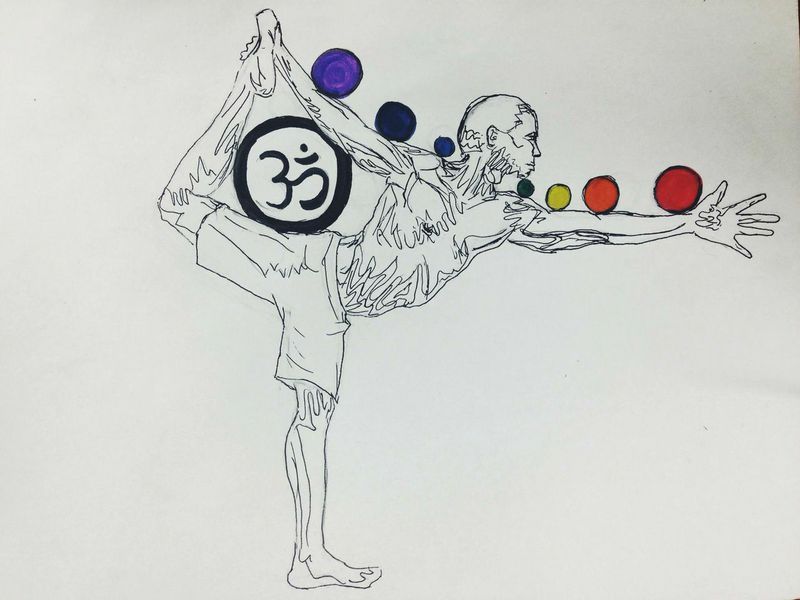 I don’t tell people about how when I was nine I couldn’t go to sleep without counting all of the markers and pens I owned and lining them up in jars on my desk. I don’t talk about the fact that I rewrote my notes in high school so that they were color-coded and took up an even number of pages. I don’t mention the hand washing or the alphabetizing or the way that anxiety seeped into every corner of my life since I was eight years old. I don’t talk about my struggles with obsessive-compulsive disorder, but I find myself telling everything to six yogis whose names I don’t know in a coffee shop in February. We’d just finished our practice and were speaking for the first time outside of the Mysore program that meets every morning from 6–9 at Providence’s Jala Studio.

Mysore is a particular variation of Ashtanga Vinyasa, which is one of the oldest styles of yoga practiced in the Western world. Ashtanga is comprised of six series, each with between 30 and 40 poses. From the very beginning, Ashtanga practitioners know that they will probably never reach the end of the sixth series and that they may spend years perfecting primary series. Ashtanga comes with a set of strict guidelines: the same series is performed six days a week; Saturdays and the days of the full and new moon are taken off. Mysore traditionally involves the instructor ‘giving’ the next pose in the sequence to the practitioner only once the previous pose is mastered. Thus, unlike a typical yoga class in the United States where instructors lead an entire class at once, Ashtanga has each practitioner doing their sequence individually. At Jala Studio, owner and Ashtanga instructor Bristol Maryott weaves around the room offering specific instruction to each individual. Ashtanga is a deeply personal practice, but the community that emerges in the early morning hours is powerful.

Bodies store all of the trauma they have encountered; it is wound into the muscles and ligaments. Unraveling those traumas on a yoga mat can be intensely vulnerable. The first time I took a class on hip openers I found myself with tears silently streaming down my face every time the muscles winding up the outside of my legs were stretched. “Anxiety lives in your hips” was the explanation offered by the instructor. I’m sure she was right because since then I’ve found a respite from my relentless mental monologue in deep hip openers. I hated pigeon, with one leg bent out in front of my torso and the other extended behind, but since that first class I am grateful every day for the way that it forces emotion to surface. Accessing powerful emotions from their physical manifestation has allowed me to process them outside of the context from which they originated. Because I don’t know how to live in the world without this practice, every morning I bring my mat and my obsessive-compulsive disorder down the hill and confront the parts of myself and my life that are stored within my body.

I started my practice when I was sixteen and stiff, overwhelmed by the judgment that came from inside my head. For ninety minutes a few times a week I could shush the incessant demands of my brain and just be in my body. It took a long time and will always be an aspect of myself that I am working on, but eventually my body became a home. Sitting up straight wasn’t a fight and my shoulders softened down from my ears, where they’d lived for as long as I could remember. I learned that it didn’t matter if I could touch my toes (I couldn’t), it mattered how I chose to dive into each pose and moment. After a year I stopped sleepwalking—something that doctors had told me was symptomatic of anxiety. At the end of my junior year of high school I threw my color-coded planner into a bonfire.

It took me many years to realize that my experience with yoga was not unique. When I started practicing I was too cripplingly shy to feel comfortable doing anything besides setting up my mat in the back corner of the room and muttering a “thank you” to the instructor after class as I shuffled out the door with my hands stuffed into my pockets. Gradually I started to make small talk with the people who had set up their mats next to mine, and finally got up the courage to give my favorite instructor a hug and tell her quietly how her class had changed by life. She didn’t say anything, just gave me a smile and squeezed me a little tighter.

I often don’t know the names of the yogis who are practicing next to me. I don’t know where the slender woman with the four gaudy rings goes in her ankle-length coat after class. I don’t know how the man with the tight hamstrings manages to ride his bicycle in the snow every day to get to the studio by 6:15 am. After three months of practice I successfully fold forward and twist myself into Marichyasana C: the arch of my left foot pressing into my right hipbone and my arms wrapped around my torso and right leg. The practitioners in the room pause and grin at me as Bristol hops up and down excitedly. I felt squashed into myself and needed help to unwind, but I had done it. I don’t know these yogis, but I know that they will be there next to me every day as I delve into all the traumas that live in my body.

This Mysore program has been the only nonverbal community I’ve ever been a part of. I don’t want to have a conversation when I’m practicing; I want to be counting my breaths, noticing which muscles are tight, and experiencing the fear that inevitably wells up when I stretch my lower back. Each one of the yogis is invested in the development of a personal practice, but there’s a sense of tapping into a shared experience. We are each surrendering to this structure, intentionally becoming exposed. Ashtanga is not easy; it’s frustrating, often repetitive, and won’t let you get through a practice without encountering the parts of yourself that are often hidden.

Last week, when I moved from a shoulder stand into plow pose, with my back flat on my mat, my legs folded over my body, and my feet pulled behind my head, I immediately felt overwhelmingly panicked. I’ve done this pose hundreds of times, but this experience of intense anxiety was new. The rigorous structure of Ashtanga paradoxically allows for the freedom to be vulnerable, and that vulnerability is the reason that half a dozen yogis in the studio care about one another so deeply. In that deeply personal, individual space, we each experience something remarkable. There’s a notion in Ashtanga of surrendering fully to the structure of the practice, and then allowing it to do its work. I come back, cold morning after cold morning, to push myself a little harder because every day I feel like I know myself more completely.

Despite it’s structure, Ashtanga is not about achievement. In a lot of ways it’s exactly the opposite of the pressure-success paradigm I operated under for most of my adolescence. From the very first class it’s clear that the goal is not to finish a series or master a pose. When Bristol talks about Ashtanga it’s clear that she regards non-attachment as essential. “You can’t get wrapped up in not being able to do it. You learn to be okay with not being perfect and not being a machine and just being in your body.” There’s no guilt associated with not being able to do a pose, or progressing through the sequence slowly, or even moving backwards. There will always be a tomorrow to try it again. There’s an elegance to a practice that exists solely for the experience of itself.

Yoga forces the practitioner to slow down. Making space or intentionally cultivating silence was never something I was encouraged to do. Upside down in a shoulder stand with my legs folded into a full lotus, knees bent and feet pressing into opposite hipbones, it’s impossible to think about anything except the orientation of my body in space and the way my breath moves through me. I’d never experienced this kind of focus before practicing yoga. Creating space and silence is now the most important practice for me to be capable of existing in the world without feeling crushed by the weight of my own thoughts. It’s an individual orientation grounded in a personal practice, and every day I am more grateful for those who practice alongside me.

It’s 6:47 in the morning and I’m sweating. I can hear the measured, stable breath of the people next to me. I know that they are counting breaths, just like I am. Five breaths in downward-facing dog. One. Can my heels reach a little closer to the earth? Two. My hamstrings are tight from the walk down the hill. Three. Release the tension in my jaw. Four. Don’t forget to press into finger pads. Five. I pause to smile at the woman next to me who’s just stood up from a graceful backbend. It takes me a little more than an hour to work through the series that I’ve been building on for the past five months. I fold my legs into a lotus pose, plant my hands outside my hips and lift myself up for ten breaths before lying down into savasana, the resting pose at the end of the series. By the time I open my eyes sunlight is streaming through the windows and my mind is quiet.

ANNE FOSBURG B’16 can touch her toes now.