Vandalism at the Islamic School of Rhode Island 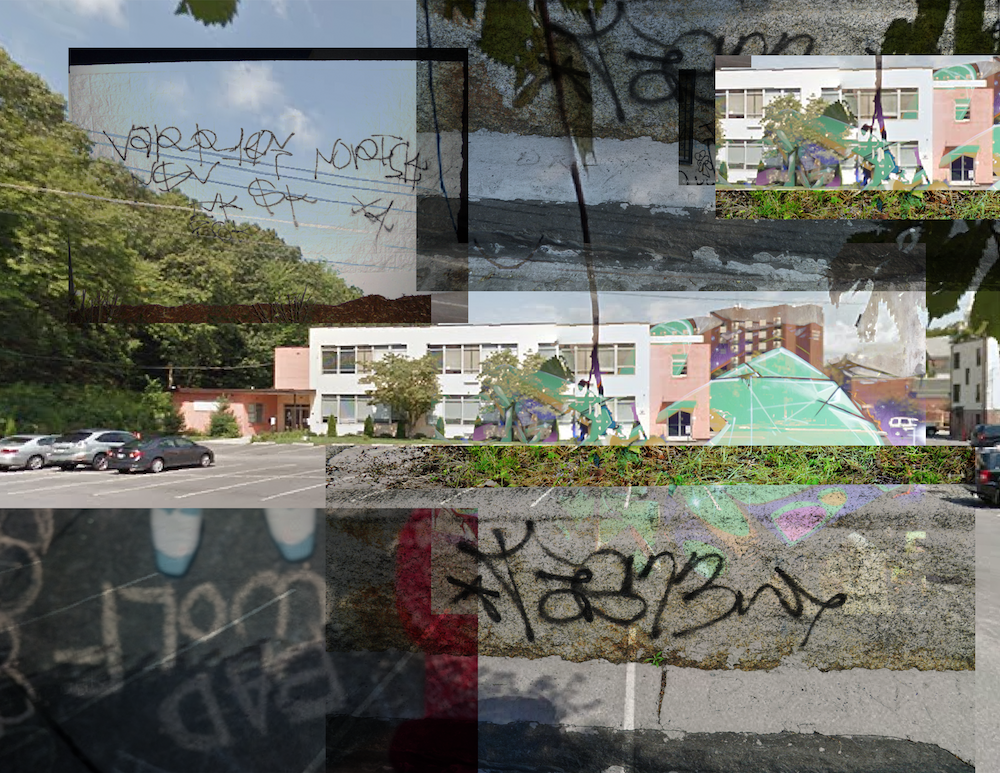 At 1:11pm on a glacial Friday, February 20th, about sixty people gathered in the back half of a small gymnasium, a makeshift prayer hall for the jumu’ah prayer. Shoeless men in heavy winter garb sat in rows, their clunky forms interspersed with the small frames of young boys. Fidgety girls sat in neat rows before them. Behind them, women in hijabs sat in chairs. Many had young bundled toddlers clasped in their laps.

Abdelnasser Hussein, the principal of the Islamic School of Rhode Island (ISRI) located in West Warwick, stood solemnly to deliver the sermon. In the wake of the prayer, an air of anxiety and quiet anticipation penetrated the room. Murmurous and shifting, the congregation silenced itself as the principal approached the podium to address those seated before him, many of whom were students and the family members of students attending the school.

Almost one week prior, in the middle of the night on Saturday, February 14, the school was vandalized with anti-Islamic graffiti. According to Hilmy Bakri, the president of the school’s board of trustees, a parent discovered the graffiti upon arriving at the school for morning prayer at roughly 7am on Sunday. The parent then notified Bakri, who in turn called the local police. Photos released by the police show the jarring orange letters scrawled across the school’s front doors and outside wall: “pigs,” it read, “now this is a hate crime.” The graffiti also contained offensive references to the Prophet Mohammad. This brazen act of Islamophobic vandalism and violence is now the subject of an ongoing FBI civil rights investigation. The FBI is coordinating with the Rhode Island Attorney General’s office as well as the West Warwick Police, though no public statements on the progress of the investigation have been issued so far. On Tuesday, after properly documenting the graffiti, the police gave the school the green light to remove the graffiti. It has since been painted over.

The incident shook the school, whose population of 160 students (ranging from pre-kindergarten to eighth grade) and 20 staff were away for February break. Speaking with the Independent, Bakri said there had been no prior incidents of vandalism. “Most of our [school] population is very young, and firstly we were worried about their safety considering the serious nature of this crime,” Bakri said. Following the incident, the school called every parent to listen to their concerns and to communicate the latest information. Through calls and e-mails, Bakri also made efforts to inform the wider Rhode Island Muslim community about the incident, and as events unfolded, he made regular and thorough updates to the school’s Facebook page. The day following the incident, Bakri posted: “We are going to do our due diligence in protecting the school—but in the end we put our trust in Allah swt [the most glorified]. He is the Almighty and most merciful, whatever he wills no one can prevent and whatever he denies no one can achieve.”

A private, non-profit school built on the old site of a church, the ISRI is housed within two modest salmon-colored buildings tucked away behind several remaining church structures and a giant CVS. The hallways are decorated with colorful student artwork: first-attempts at Arabic script in crayon, mosaics of make-believe mosques, pencil drawings of the Quran. Outside the bathroom, illustrated posters in Arabic instruct students on how to properly wash their mouths, faces, hands, feet and forearms.

Students at the ISRI are mostly the children of immigrants from a wide array of countries including Nigeria, Kenya, Saudi Arabia, India and Turkey. The demographics represented at the ISRI mirror the broader Muslim population in the State: adherents are mostly immigrants and are both ethnically and linguistically diverse. Muslims—most of whom live in the greater Providence area—constitute roughly 0.006–0.007 percent of the roughly one million people in Rhode Island. According to a Pew Research Center study conducted in 2010, Muslims make up 0.6 percent of the national population.

Major Muslim centers of worship and socializing within Rhode Island are mostly located in the central and northern regions of the state. The first masjid (Arabic for mosque), Masjid Al-Karim, was built on Cranston Street in Providence in 1976. The construction and establishment of other masjids soon followed, first with Masjid Al-Rahman in Pawtucket and later Masjid Islam in North Smithfield. Masjids not only provide a place of worship, but also serve as a space for community building through religious and educational programs, classes and other activities. As the fastest growing religion in the world and the third largest faith in the United States, Islam has an estimated 20,000–40,000 new converts annually in the US. The Providence Muslim population is also growing quickly, though exact statistics on the pace of expansion are unclear. “It’s growing, it’s really growing,” said Aboubekr, a representative and member of the Islamic Center of Rhode Island in reference to Providence’s Muslim community.

Bakri, who is Malaysian-American and whose two children attend the ISRI, told me that the school has met a demand for an Islamic-centered education for children in the Muslim community in the greater Providence area. As we entered the main school building where the classrooms are located, we passed under the school’s mission statement. It reads: “The Islamic School of Rhode Island is committed to inspiring excellence in our students’ education, character and personal conduct. We strive to teach them how to gain KNOWLEDGE, increase their FAITH in their daily lives, and incorporate Islam and exercise DISCIPLINE in their pursuits to benefit themselves and society.”

Since the incident, the school has planned to install additional surveillance cameras and an alarm system for the doors and to institute a series of internal precautions in the case of another similar incident. To pay for these new upgrades to the school’s existing system, Bakri recently set up a GoFundMe page for the school. A privately funded school, ISRI derives 80 percent of its funding from tuition fees and the remaining 20 percent from fundraising efforts. While all students have to pay tuition, the school offers financial aid for those who cannot afford the full price, including discounts for the children of teachers. Tuition for pre-kindergarten is $4,870 while kindergarten through eighth grade is $4600 for the 2014-2015 school year, with a sibling discount of $250. Speaking quickly in a voice that deviated from its usual measured cadence, Bakri told me: “I checked the page a few hours ago and there have already been twenty-four donations, with over half from people with non-Muslim names!”

Seated in a chair built for a first-grader, Bakri recounted the various acts of kindness that had occurred as news of the incident spread. Besides donations from students’ parents, there had been an expression of solidarity by 21 faith leaders in Rhode Island at a press conference held at the school. The conference featured the resident Imam of Rhode Island, a representative of the Jewish Alliance of Greater Rhode Island as well as the executive minister for the Rhode Island State Council of Churches. Marty Cooper, representing the Jewish Alliance of Greater Rhode Island said: “We condemn prejudice and injustice of any kind. It is simply unconscionable that a school in our state has become the victim of what appears to be a hate crime.”

In addition, Bakri said that so far there had been one or two anonymous donations through PayPal, a gift of flowers offered by a woman from East Providence, and a delivery of an overflowing US Postal Service box of letters of solidarity from students at the Moses Brown School. Printed on each letter was a big heart with a large quote by John Woolman, US Quaker in 1762: “Love was the first motion…” Bakri went on to tell me how touched he was upon receiving a condolence e-mail from someone who lives close to the school in West Warwick: “He signed the letter ‘Your neighbor.’ In Islam, neighbors are among the first and most significant people you have to maintain good relationships with. I didn’t know that there was a deeper support from people in general, even from our neighbors in West Warwick.”

Although difficult to measure, relations between Muslims and non-Muslims in Providence and Rhode Island more generally have been relatively stable. In relation to the recent graffiti incident, Bakri said the politicians in Rhode Island have been supportive, with a councilman from West Warwick offering his sympathies and stating that this act does not reflect the views of the community at large. In an e-mail to the Independent, Bakri said he thinks this incident reflects the views of “a select few people who are committing atrocities.” More generally, the ISRI has tried to convey to the press and to parents the notion that Muslims in Rhode Island have not been targeted any more than other faiths. Bakri went on to state: “I think again there hasn’t been any major persecution or emotions of hatred towards [Muslims]. At least not [according to] the Muslims that I’ve known in Providence.”

In his Friday sermon, principal Hussein spoke passionately about using this incident as a moment for critical self-reflection. “There is a wave of hatred in some places against our community. If you put your finger on a map anywhere, you can find that our Muslim brothers and organizations are targeted here, and [that] our community is defamed there,” he began. Just this past week, the Quba Islamic Institute in Houston, Texas was destroyed in an act of arson; three American Muslim university students were murdered in their Chapel Hill apartment near the University of North Carolina; and an Arab-American Muslim man was harassed in a Kroger grocery store in Dearborn, Michigan. In English interspersed with Arabic verses from the Quran, Hussein spoke about everyday incidences of discrimination against the Muslim community of Providence. He described the cold glares women wearing hijabs receive in the supermarket, and the isolation many feel from being shamed by others for their Islamic faith.

But Hussein also called on those congregated before him to look inwards before criticizing others. Pointing to the cinder block wall behind his podium, Hussein talked about how each block served to fortify the whole: “That’s how we as Muslims should be. We should strengthen each other. We think too much that people hate us. We forget to think that we’re not being true to our beliefs. Mohammed tells us to pray on time, to go on hajj, and to give to charity and to love each other. How often do we do this? This is a lesson for us. Before you look elsewhere, you should look within yourself to see how you can improve.”

After the sermon, the congregation rose to pray. People, young and old, had trickled into the gymnasium during the 40-minute long sermon, and now there were almost 100 people in the room. Hussein spoke one last time into the microphone: “Do not weaken, and do not grieve.” After the final prayer, the room erupted in noise and camaraderie. Women and men with wide smiles embraced each other, frenzied children played hopscotch and tag, and others made their way towards the pile of shoes and winter boots that bordered the prayer rug.

As I exited the gymnasium, I overheard principal Hussein in conversation with a representative from a security company about possible ways to upgrade the existing infrastructure. In conjunction with a less visible process of rebuilding and fortification, a physical process of renovation was taking place. The school plans to remove the current (repainted) doors and replace them with a set of heavier, stronger ones. Changes to the pick-up and drop-off process for students were being negotiated, and Hussein planned to hold a school-wide assembly for students and their parents. Though the hallways and classrooms were empty, on Monday, students would return from their February vacation and fall back into their school day routines.

MADELEINE MATSUI B’17 is someone’s neighbor.