With the image of New York and Boston before it, Providence is designing a bike share. Providence’s bike share will be a public-private partnership. In 2010, Alta Planning + Design—the same company that controls New York’s Citi Bikes—completed a feasibility study to assess the possibility of implementing a bike share in Providence. This positioned the company as the obvious frontrunner when the City of Providence solicited bids from bike share implementation corporations in 2013. The City sought a company that could make the bike share revenue neutral, and Alta promised to do just that.

Bike shares are commonly implemented by municipalities and private corporations working in tandem. From the onset, the partnerships illuminate divergent allegiances, or allegiances that should be divergent. Alta is a for-profit company that seeks to make money off of its system. Meanwhile, the City is charged with establishing infrastructure that serves the people who live here. In the creation of the Providence Bike Share, the City of Providence seems to have forgetten this allegiance.

Crafting the new bike share, Providence envisions a “financially self-sustaining model.” Alta seeks to achieve this by soliciting sponsorships, and, in its feasibility study, offered the city two potential funding avenues. The first is public funding. Grants are available via the Federal Transit Authority, Federal Highway Administration, Center for Disease Control, and Department of Energy. Public funding affords the City greater control of the bike share. The second is private funding. The New York City bike share is entirely privately funded. It has served as neither a public, nor an accessible form of transit. After the creation of an exclusive system completely backed by private investments, the City of New York attempted to retroactively change the homogeneity of bike sharers, locating stations within one block of every New York City Housing Authority Station, but these users only account for .004 percent of the New York City bike share annual members.

The City of Providence opted for private funding. They also recommended a service area to Alta that makes it rather clear what users they envision and are actively courting. They are not avoiding the nearly solely rich, white clientele of the New York City bike share, but are effectively replicating it. The design covers a clearly outlined 1.4-mile radius of Downtown, College Hill, Fox Point, and Federal Hill, announcing the City’s priorities in an overt geographical mapping. The lines of exclusion are defined by the locations of proposed bike share hubs. While the word ‘share’ may invite visions of equity and progress, those visions are false. This is not an effort to connect the furthest, neglected quadrants of the city to the well-serviced urban core. Ironically, Alta, whose vested interest is in profitability over accessibility, suggested that Providence establish, “a new non-profit organization to oversee the creation of a bike share system.” Perhaps the corporation decided they lacked the bureaucratic capacity to address equity. No non-profit was established.

Alta seeks to profit from this bike share. Their systems can expectedly be exclusive. They take three steps to ensure that. To join the bike share, a smart phone, credit card, and state-issued ID are mandatory, forging a targeted market. It is the fact that the City, a governing body charged with providing public services, is compounding this exclusivity with geographic bounds that is alarming. Without the enticement of generating any revenue from this venture, Providence theoretically has no loyalties to a specific clientele. Yet in providing mobility to the residents of the city that fit the image of the rebranded Creative Capital, Providence is seeking to create a bike share that generates marketable social capital.

According to the feasibility study, the pilot fleet of 200 bikes and 20 bike hubs will serve to “link Downtown to College Hill.” After initial plans to launch in fall of 2014, the date was pushed to spring 2015, as the City has had difficulty fulfilling its promises to assist Alta Bike to identify, “relationships with prospective institutional customers.”  The delay indicates trouble acquiring financial support from the institutions that are geographically poised to benefit most from the design. “The Preliminary Station Plan recognizes areas of highest potential demand, which includes parts of Providence where ‘early adopters’ such as Brown and RISD students reside.” The bike share was mapped for these identified, ideal early adopters. It then enticed these institutions, inviting them as benefactors to support a service created in their image. Yet when the city opted for private rather than public funding, when they targeted specific institutions, they honed in on a clientele that is supersaturated with transit options. There already exists a strong link between Downtown and College Hill. It comes in the form of free RIPTA access, university-run shuttles, taxis, personal cars, zip cars, and frequently discounted ubers and lyfts.

As the proposal would have to compete with a smorgasbord of other transit options, there’s no guarantee the demographic for whom this bike share was created will use it. Historically, bicycles have served as an alternative to cars, an inclusive option for those without access to four wheels. In courting the privileged, the City is competing with established private mobility, forgoing connections in neighborhoods in need of superior transportation networks where they would not cater to a fickle, niche market, but rather entrench themselves in permanent transportation infrastructure.

The City declared, “The initial size of the network should, at minimum, include Downcity, Capital Center, Fox Point, the Hospital District, College Hill and Federal Hill.” All the neighborhoods selected for inclusion in the bike share have, at minimum, two things in common: they are predominantly white and the median income falls above the citywide average of $37,856. The residents of the neighborhoods excluded, namely those in the South and West Side, are predominantly people of color with incomes below the city average. 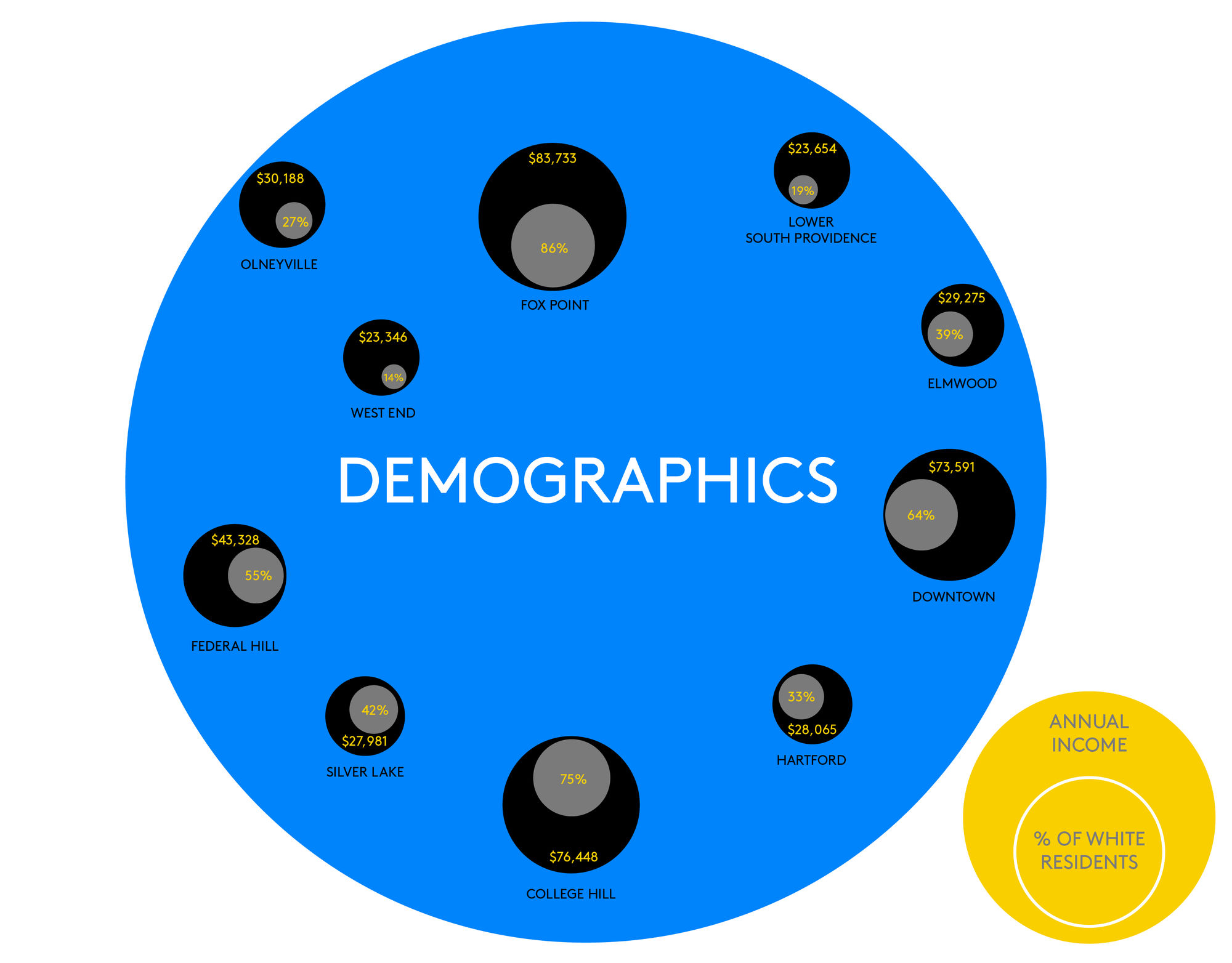 Providence claims the bike share should create “good connections to nearby residential neighborhoods.” The vague rhetoric of connection quickly disintegrates next to the clarity of the superimposed dashed red lines that serve as explicit boundaries between bike share access and neighborhoods in South and West Providence. After glancing at the proposed map, Providence resident and RIPTA rider Brent Runyon, reacted, “I can’t imagine why it would cover half of Broadway and not the other half.”

The history of redlining makes it easy to imagine why the bike share will not cover West Broadway. Redlining began with the Housing Act of 1934, and was originally used to outline Black inner-city areas where banks would not invest, making it difficult for those neighborhoods to attract families who could purchase their own homes. It has since evolved, broadly denoting discrimination and the denial of services to residents based on racially determined boundaries drawn by those in power. 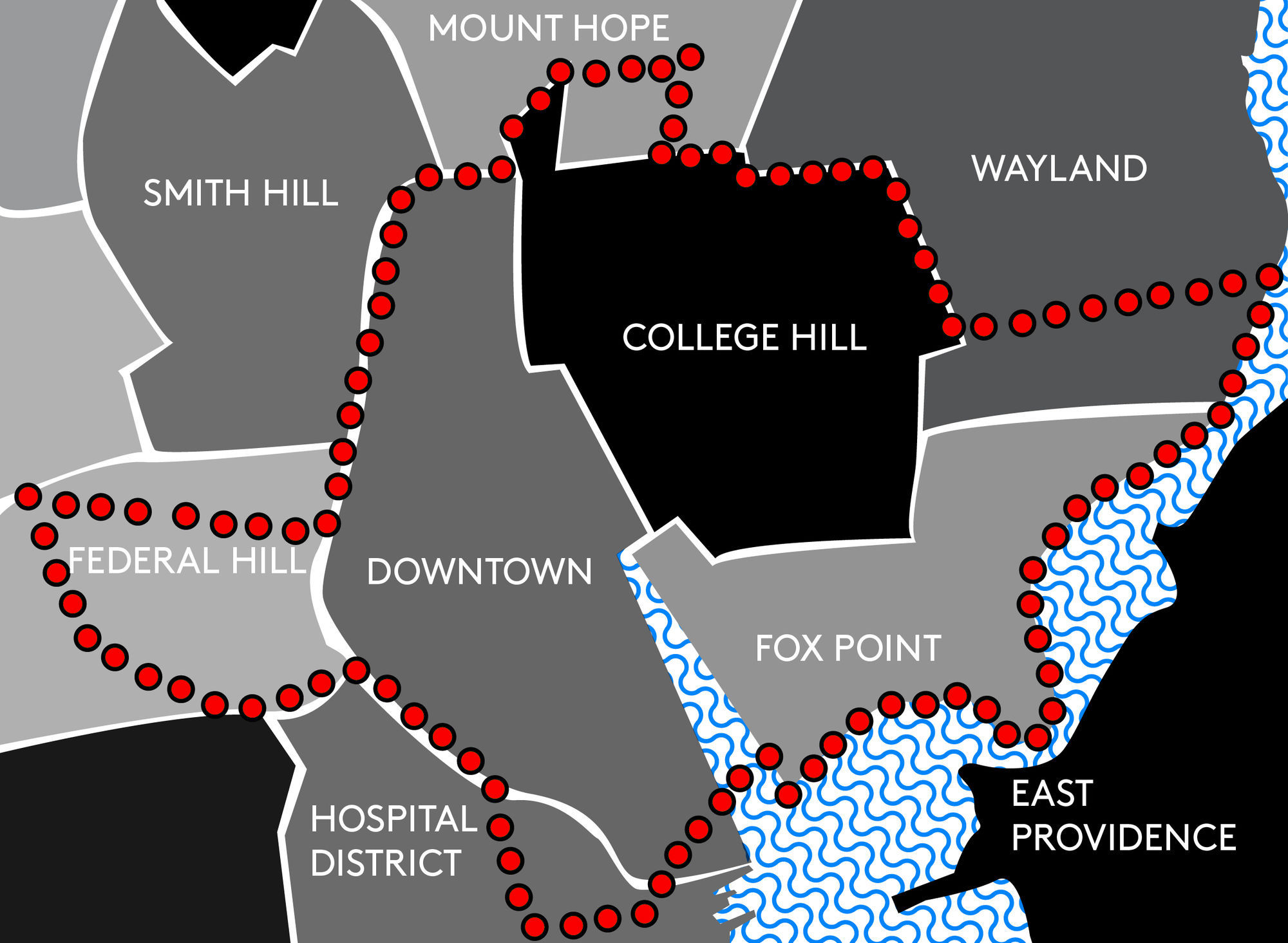 Based on the map the City outlined, Alta is concerned with the “topographical change between Downtown and College Hill.” To remedy this issue, they “may recommend to the City that additional signed bike routes be established to take advantage of access to the top of College Hill…from the south where grades are gentle.” If the City sought public funding, they might move beyond the peripheral participation of creating signage to address a topographical change, and have the leverage to incorporate the system as a pillar of infrastructure, establishing a bike share program that branches outside areas frequented by aspiring academics and coveted creators that the current bike share caters to.

The City can still reclaim its alleged allegiance to the public and serve as a pioneer in the American bike share sphere if they model the program after that in Avignon, France. A small city of 90,000, Avignon is measurably closer in size to Providence’s 177,994 residents than New York’s 8.4 million, and arguably serves as an example of the most effective link between the public and private of any bike share globally.  The membership includes a bus pass, which allows users to mix modes of transport and creates a link between regions not covered by either bus routes or bike hubs.

The City’s difficulty in attaining private funding suggests it may be time to reflect on its nature as a public institution, and pursue public funding sources. Currently, Providence’s model for the bike share will charge an $80 annual fee, in addition to a $6 hourly rate. In publicly funded San Antonio’s model, unlimited hour-long rides are free.

Providence has an opportunity to extend the bounds of inclusion with a bike share designed with equality in mind, by capitalizing on their role as not only a governing agency, but also as representative of the public in this partnership. That public does not live in a 1.4 mile radius, and expanding the parameters of the bike share to include those historically excluded regions will serve to differentiate Providence from Boston and New York. The City must call for the elimination of Alta’s state-issued identification requirement for registration, a common tactic for excluding marginalized immigrant populations from accessing services. The City can transition from private to public funding to create a public good. Providence can capitalize on its small size, and realistically place bike hubs in every neighborhood. RIPTA can be included as a partner to create a comprehensive and interactive transit system. It should not be a radical idea to allow all residents of the same city the right to move freely through it.

EMMA PHILLIPS B’17 thinks Creative Capital is a shoddy alliteration.