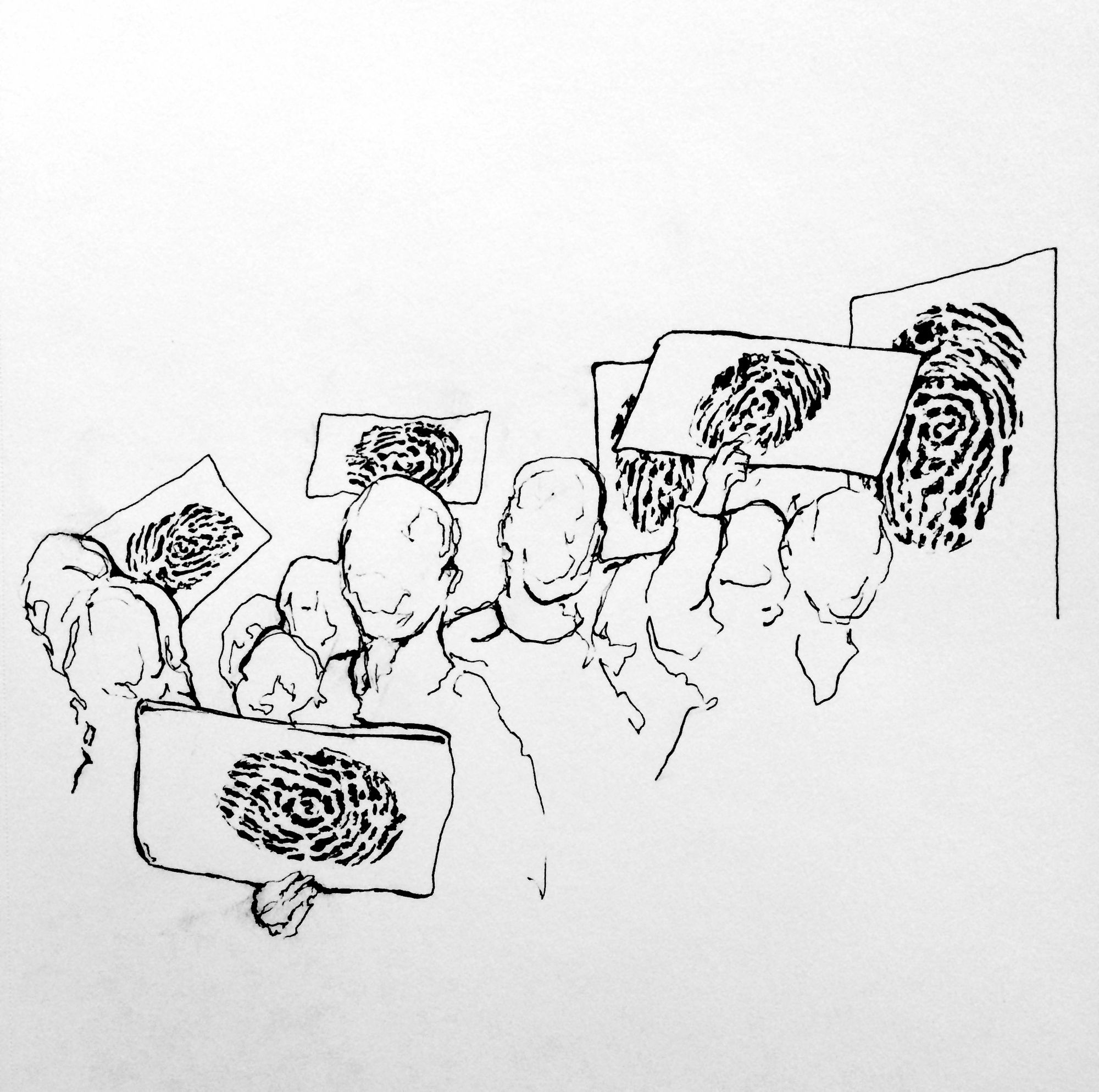 December 5, 2014 – “Heads up. It’s supposed to pour. So the protest may not last as long as you think.” A friend texted. I scoffed at her naiveté. Protests don’t work that way, or at least they’re not supposed to. Expressing political discontent shouldn’t be dependent on whether or not it rains.

There was constant, cold drizzle. Swarms of Providence patrol vehicles lined the roads as we walked to beat of our steady chant to Central High, the starting point of that evening’s protest organized by the grassroots collective End Police Brutality PVD. The alternating wheel of primary red and blue hues reflected in each droplet. A large part of what draws me to protesting—besides personal connections to the issues and political leanings—is the electricity of it all, how the feelings harnessed in a mass coordination can never be fully encapsulated or recounted beyond the initial moment.

Unbeknownst to me and many other demonstrators, the Providence Police Department was not only watching from motorcycles, patrol cars, and mounted horseback—they were also videotaping us. PPD was attempting to capture the uncapturable moment of resistance.

On Friday, January 23, the Rhode Island ACLU released a letter admonishing the Providence Police Department for videotaping the December protest. Steven Paré, Providence’s Public Safety Commissioner, admitted that the department has taken surveillance videos at two large demonstrations in the last year. According to the ACLU, which criticized this practice as both an intimidation scheme and one without procedural precedent, video recordings were taken on numerous cell phones and a video camera by officers at the November 25 and December 5 protests, both of which were “peaceful” assemblies in response to the non-indictments in the Michael Brown and Eric Garner cases. The ACLU, in its letter, briefly mentions three other instances when police have covertly taped mass assemblies, including a 2013 press conference about a Racial Profiling Prevention Act. The second incident occurred merely two weeks after a crowdsourced video surfaced of a white policeman pinning down a Black male protester with a skateboard. The assault was captured in not one but two digital accounts—one from protestors and one from recording officers—however Robert Heaton, the assaulting officer, was cleared of excessive force accusations shortly after the incident. Meanwhile, reformers look to body cameras in the name of accountability; and, in these reactionary proposals, further validate those same cycles of violence and brutality.

Paré has defended the department’s unsanctioned, undercover videotaping during public assemblies—which, according to the ACLU, was in at least one case done by un-uniformed officers, as a cautionary safety measure, collecting potential evidence to aid hypothetical investigations in the event of undefined “disorder.” He has, furthermore, denied calls that recordings be outlined in procedural guidelines if law enforcement agencies continue to use such measures.

Contemporary protest is now faced with the double-crux of increasingly militarized local police forces and extensive networks of surveillance, as evidenced by recent examples from Oakland to Chicago to New York and now Providence. Protestors are faced with the immediate fear of police agitators dressed in riot gear and heavily armed, and must increasingly worry about future legal prosecution of their actions. This has created a penetrating, totalizing state of fear. Both not only call into question First Amendment freedoms, but also raise issues of privilege and power when it comes to the mere act of publicly resisting and using one’s own voice and body as the mechanism through which one enacts calls for change. Who can afford to have the police monitoring their every action? Who is more or less afraid of the blue uniforms? More or less afraid of the police’s perceptions of them and how those subjectivities dictate their life, their right to walk down the street without being harassed or brutalized?

As the act of eavesdropping becomes further sanctioned by the state, our world becomes more filled with cameras—rather they be police cameras, body cameras on police vests, traffic cameras, or cell-phone cameras in the hands of activists and citizen journalists. The cops are filming us. We are filming the cops. But the stakes of this digital dialectic are higher for some than others.

And so the concealed cameras interrogated the scene, casting us—the protestors—as suspicious characters, all of whom were worthy of circumspect observation. And as the cameras implicated us broadly as one aggregate untrustworthy disobedient, tensions weaved through the mass distinguishing one demonstrator from the next.

Several images from the night—while perhaps undistinguished from one grainy second of surveillance video to the next—are etched into my memory.

When I had been the only woman—and the only student—to hop the fence to the interstate at the Providence protest before cops swarmed in to push the seven or so of us back over. When we came face to face with aggressive officers who were physically violating protestors, holding our cell phone cameras in their faces, and yelling out their badge numbers. “328, 328, 328.” The people at the forefront, the ones getting their collars jacked by officers, were all Providence community members; the overwhelming majority of student ‘allies’ straggled in the back away from the police, safe and assured in their socioeconomic and intellectual privileges. It was surreal to see a hoard of 50 or 60 predominantly white Ivy League students back away from the fence in step, because jumping over was too physically risky. They lurched at the very thought of it, weakening the entire action. And the police exploited these divisions, forcibly escorting the seven or eight of us back over the fence. I looked at them and wondered why they were there. “Nice gesture, but if you’re not here to use your privilege to help shut shit down, why did you waste your time walking down the hill?” Amateurs, I thought, all of them—except my friends and me—looking for nothing more than self-affirmation of their liberalism.“Look at me, I care about social justice, I signed a petition on change.org and have a Black friend,” I mocked them harshly, longing to distance myself and my actions from theirs. Despite my low-income background, my blackness, and my numerous experiences of racial profiling from police in Providence, I was implicated in that same student privilege I criticized. I had walked down the hill with the rest of them. So while I wanted to yell at them. “Why are you just standing there, not chanting?”  I had to, in the same breath, acknowledge my position of privilege.

Covert PPD cameras continued to record the scene, lumped all of us together, as the most important contours of the scene were lost by their videos.

The ACLU, in the letter to Paré, asserts, “the Providence Police Department viewed each of these individuals as potential criminals, and placed them under surveillance.” However, there remains an unseen plot that the cameras could not recount. Or could they?

Say a police officer is combing through the surveillance footage in the aftermath of a protest. Who is said officer more likely to zoom in and pause on? The shot of a group of several white 20-somethings huddled near the rear or an image of a young Black guy with the skateboard in the front of the crowd?