Hooking Up With History 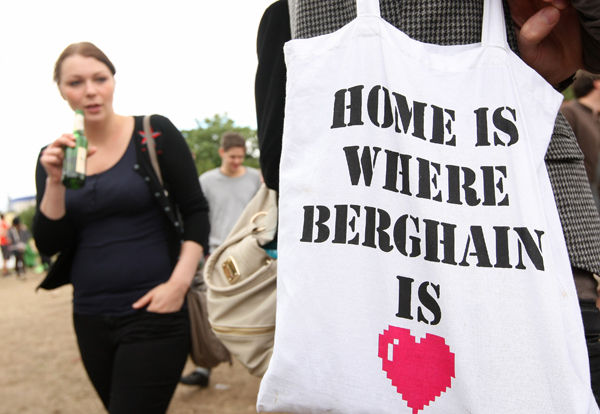 It might read blasphemous to call today’s cult fixation with Berlin parochial.  Yet, to enter the city’s most infamous club, according to an article that appeared in Rolling Stone last February entitled “Berghain: The Secretive, Sex-Fueled World of Techno’s Coolest Club,” is to have “a religious experience.” Walking through the city’s major tourist thoroughfares, one passes the tedious racks of mass produced tote bags and sweatshirts—“I <3 New York” exchanged for the sentimental “Home is where Berghain is <3”. As the hype would have it, to discover for the very first time a sincere, if mdma mediated, love for Minimal Goth-Tech as it vibrates through the world’s most expensive sound-system, is to have the lauded Berlin experience.  You may now depart, selective Instagram and Facebook documentation in virtual tow, tinder/grindr matches deleted to make room for the lucky new bachelor(ette)s during your five days in Amsterdam.

This is not an article about Berlin’s nightlife per se. It aims, rather, to reveal a certain hedonistic vacuity promised to tourists, which has now run rampant in a city with a particularly grave past. Nor is this article a condemnation of the city’s nightlife. It aims, rather, to reveal one realm, outside of the “holy gates” of Berghain, where vacuity does not seem to belong—a realm in which thoughtlessness and the tourist’s selfie rear an ugly grin in the face of the city’s tortured past. 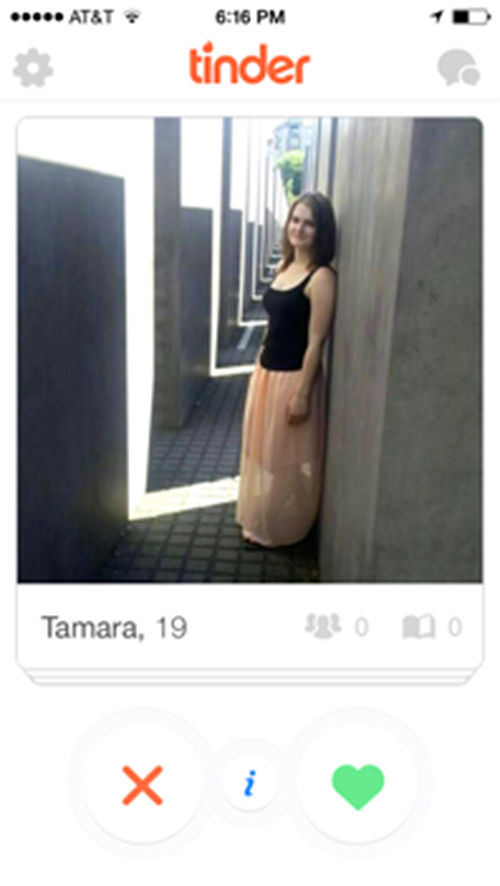 Let it first be said that the club culture in Berlin has in many ways complemented, if not ushered in a cosmopolitanism reminiscent of the city in the decades of democracy preceding Germany’s totalitarian rule. Under the Weimer Republic, established in 1919 and dissolved by Hitler in 1933, Berlin thrived as a haven for intellectuals, artists, people of marginalized sexual orientations and religious affiliations, and radical political thinkers (many of whom identified with all of these classifications, at once). The predominant club culture in Berlin today seems, to those paying attention to the city’s history, a welcome return to an ethos of liberation comparable to that of a Berlin that Joseph Goebbels called a “sinkhole of iniquity” in his personal diary in 1926—a diverse and sensational Berlin, which embraced “homosexuality, avant-garde art, left-wing politics, jazz, and lascivious cabaret” as well as a huge influx of tourists eager to see the thriving and technologically advanced European metropolis.

Today, like the early half of the twentieth century, we see Berlin’s tourism industry growing at unprecedented rates. Berlin’s Senator for Economics, Cornelia Yzer, recently went on record saying, “Berlin has been setting tourism records for ten years straight. The capital is one of the fastest growing destinations in the world. It’s firmly placed among the top three destinations in Europe… And tourism has become a key factor to Berlin’s economic success.” Tourists pour into Berlin, seeking the patented Berlin experience, often perceived as a no-holds-barred type of nightlife experience. They seek a place where conventional boundaries no longer exist—even if such liberation takes the form of debauched sexual encounters during a fetish night in the darkroom of one’s favorite club.

In some ways, though, what initially appears to be mindless hedonism also takes on a rhetorical significance. Each hook-up that occurs outside the invisible confines of heterosexual monogamy might be seen as the welcome de-sanitizing of the fascist’s “purification” policies in Berlin.  Though it is doubtful that the political-historical implication of such hook ups are on the mind of the participants in the act, their transgression from conventional hetero-normative boundaries (boundaries upheld and brutally enforced by the National Socialists) might be read as a potent form of subversion.  That the city permits, promotes, and sells the image of these sexually liberated spaces (think “Home is where Berghain is <3” tote bags) might be read as a type of anti-fascist redemption.

But such interpretations of Berlin’s club culture can only take us so far.  Whether or not places like Berghain foster certain forms of liberated behavior reminiscent of those seen in the city during the Weimar Republic, it is clear that the degree to which such a phenomenon truly engages the history of the city is limited. While this type of hedonistic behavior can be situated within the city’s cultural history, it seems that by its very nature a hook up is not politically motivated—at least not purely and not in the moment. It seems that the participants of a boundary bending hook-up in the dark room of x-club engage with the past inadvertently, brought to the fore only by retrospective analysis that interprets these actions and situates them discursively within a historical and political context. When I referred to Berlin’s club culture as “parochial” earlier in the piece, I meant it in an absurd way. While the sexual liberation fostered within these clubs might have political and historical significance, those attracted to such spaces seem to be narrowly motivated by the desire for a good a time.  I don’t mean to suggest that this is blameworthy. Rather, it has become clear that this hedonistic attitude has extended far beyond the dungeon-like walls of Berlin’s favorite weekend destinations into some unlikely spaces. 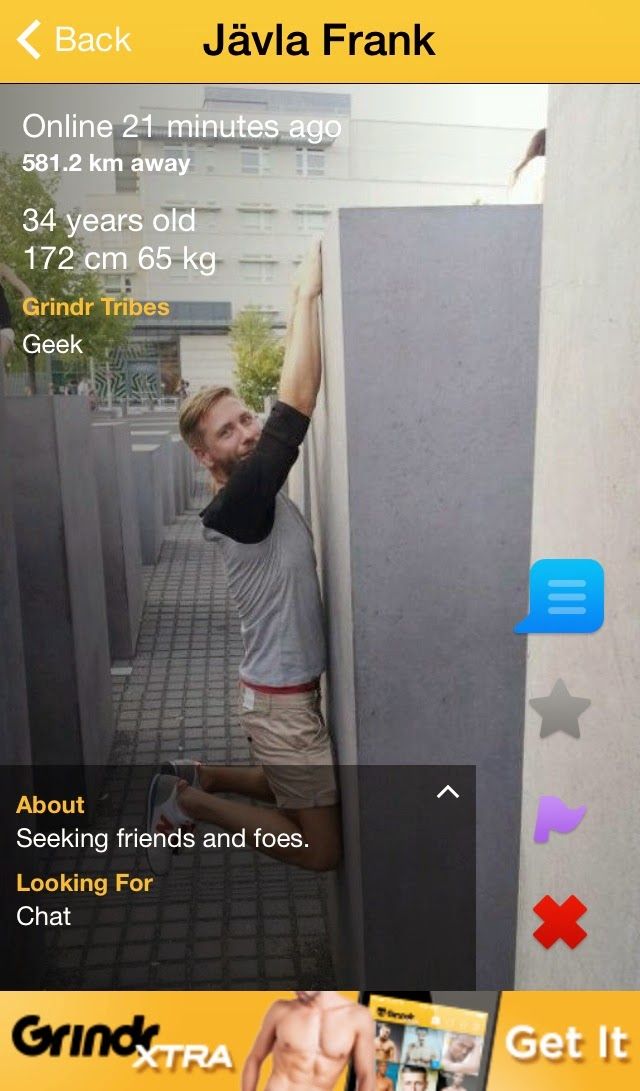 Nothing speaks to the inadvertent politicization of the hook-up more than the recent infiltration of hook-up apps like Grindr and Tinder into the Memorial to the Murdered Jews of Europe in the heart of Berlin.

For a brief moment in November 2011 the newest thing to hit the blogosphere was a website called “Totem and Taboo: Grindr remembers the holocaust.” In its tongue-in-cheek “about” section, the blog asserts its raison d’etre: “In an age when ignorance is [sic] prevalent than ever, Grindr, the latest most addictive gay obsession, has wowed its members in relentlessly promoting the memory of the holocaust. While the gay community is under scrutiny for promoting hedonism and alienation, this tribute seems all the more compelling.” Each month the blog posts screenshots those Grindr profiles in which the backdrop of the profile picture is the Memorial to the Murdered Jews of Europe.  Over the course of the last four years, the site has compiled nearly two hundred screen shots of men posing somewhere within the five acre field of the 2,711 concrete slabs (called “stelae”), which constitute the memorial.

It should be noted that the blog blithely ignores the same trend in Grindr’s hetero-hook-up counterpart Tinder.

Indeed, in the process of swiping right and left within a fifty mile radius of the memorial, it is hard to ignore the abundance of profile pictures staged in between the the holocaust memorial’s concrete stelae.

Much the same in the case of the hook-up culture in Berlin’s clubs, it is possible to give a redeeming reading of the Grindr pictures that were taken in the memorial. Over the course of the decade-long debates over the specifications and design of a holocaust memorial for Berlin following the fall of the Berlin Wall, perhaps the most contentious question that arose was to whom the site should be dedicated. Should it be a memorial to the murdered victims of the Third Reich? Or should it be a memorial with a qualifier after the word murdered—like a memorial to the murdered Jews, Roma and Sinti, Communists, and/or gay victims of the holocaust? As is clear from the memorial’s name, the committee opted to dedicate the most expansive and centrally located plot of land to the Jewish victims, while giving smaller, separate memorials to the Roma, Sinti, and queer victims of fascist persecution. The Memorial Committee’s and German Parliament’s decision to divide the memorial based on category of victim received widespread criticism even outside of queer communities, essentially boiling down to the question: does such separation create a hierarchy of victimhood?  In this sense the proliferation of Grindr photos taken at the Memorial might be seen as a form of protest—a rhetorical gesture, inserting not only the image of gay men, but also the implication of an act that signifies and expresses their sexual orientation, into the site of commemoration from which queer victims were excluded.

But like in the case of the gender-bending hook-up in the dark room of a club in Berlin, such analysis is retrospective and distant.  What the Tinder users’ photographs possibly show us, given that they are unable to lay claim to such a political alibi, is that the memorial might simply be a compelling backdrop for an attractive photograph given its contemporary architectural character. To read into the political motivations of hook-up app users and assign their actions political significance is to offer a singular implication within a complicated network of meaning. On the one hand, the use of these photographs on social media proliferates the image of Berlin’s largest holocaust memorial, and sparks debate about the imperative  to remember Germany’s past. On the other hand, the photographs indicate that visitors to the memorial are using it to document and advertise recent, personal histories, in a gesture that annihilates the history the site was intended to commemorate. Whatever the case, it seems clear that the hedonistic culture, given a home in Berlin’s clubs, has bled deep into the fabric of the city for better or for worse.