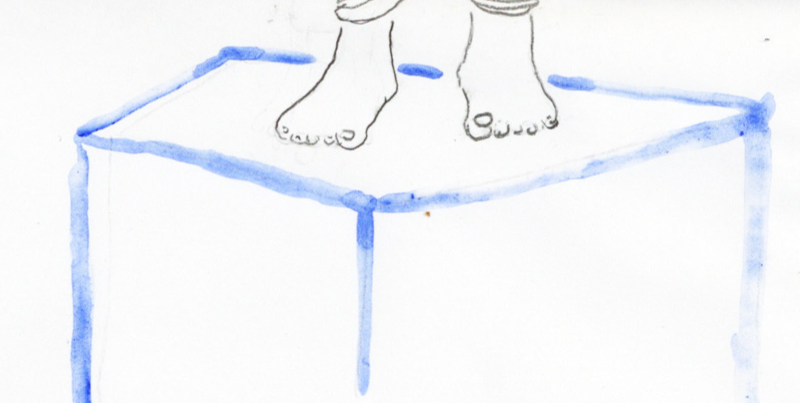 I was once given directions, drawn on a paper napkin, to a longstanding Bombay secret. It took me eight months before I finally followed them. It was on a random afternoon, when I realized I was in the area that the makeshift map indicated. In a simple arrangement of arrows and shapes, it read: turn left into the lane behind the National Gallery of Modern Art, then take another left. On your right, there are two black water tanks. Next to the two tanks, there is a shed made of corrugated steel. There is a hole in the shed. Look into the hole. Like most days, the sun was bright and hot, making the shadows deeper and the air thicker. It took my eye a few seconds to adjust to the darkness of the shed, and then I saw it, much closer in distance than I had expected: a nose.

On February 28, 1948, the British left Bombay the way they came, at least symbolically. The last battalion marched through the Gateway of India, a monumental arch on the southern tip of the city that had emblematically opened the country to the Raj, laying it bare for centuries of colonial rule and plunder. An entry wound, if you will. As the troops marched through the Gateway and onto the waiting ships, the newly conceived Indian flag blew defiantly in the breeze, the first of many symbols that would be created to combat the enduring, painful legacy of imperialism.

In the last months of 2014, two state governments in India approved two massive memorial proposals: the Statue of Unity in Gujarat, a monumental sculpture of the country’s first home minister, Sardar Vallabhbhai Patel; and the Shivaji memorial in Maharashtra, an equestrian statue of a Maratha warrior king. Both projects have planned heights that would dwarf the Statue of Liberty and both tell a story of India in images that diametrically oppose those of the Gateway of India or any colonial monument designed by the British. Both projects are necessarily ostentatious not because of the history they must tell, but the history they want to replace.

The nose is, of course, attached to a body. Though sculpted in black stone, it is the form of a white man, some British ruler whose carved likeness once graced a busy junction in Bombay, but is now shunned to a dusty shed in Mumbai, a city now rid of its colonial name and retitled after the Hindu goddess Mumbadevi. Behind this guy is a second, larger-than-life statue, also banished to the darkness. So the story goes: in the years following independence, local Indian activists went around the city rounding up the sculptures that paid homage to India’s still fresh relationship with the British. These statues—of generals, of King Edward VII, of Queen Victoria—were often exiled to the local zoo (where, today, they are the closest to living things on display after most of the zoo animals have died from neglect). What was the logic behind these sweeping expulsions of Bombay’s imperial statues?

In Milan Kundera’s Immortality, the protagonist, Paul, deliberates: “ideology belonged to history, while the reign of imagology begins where history ends.” Imagology, an invented word, is what turned Marxism from a set of principles, an ideology, into a series of symbols and slogans for the world to lap up: the sickle and hammer, Che, “Workers of the World, unite!” It is what one finds on the surface of political struggle; it is the propaganda machine churning out consumable simulations of history. It is undoubtedly easier to disseminate a complicated history through synecdoche, and often, these images detach themselves from the reality they were based on, taking on a life of their own.

The Statue of Unity is one of Prime Minister Narendra Modi’s many pet projects designed to boost the country’s image. Along with his “Make in India” campaign and the promise of a high-speed bullet train, Modi is eager to erect this expensive, bold instance of public art, once again in the laboratory that is his home state of Gujarat. It is designed, like many of his initiatives, to be a point of conversation, a shining example of a prosperous India impatient to grow economically and keep up with Asia’s speedy globalization. Affluent residents of India’s metropolises love to gush about Gujarat’s superior infrastructure, and Modi hopes that foreigners and Indians alike will hear words like “e-governance” and renew their faith in what had, before his election, become a faltering and corrupt central administration. To a large extent, it has worked.

Meanwhile in Bombay, every step is accompanied by the sight of something named after Shivaji. Chhatrapati (Emperor) Shivaji’s legacy stems from his conquests in the 17th century, against the Mughal and British Empires alike, and his committed devotion to Hinduism. The Prince of Wales Museum? That’s now the Chhatrapati Shivaji Vastu Sangrahalaya. Victoria Terminus, that Gothic Revival embodiment of imperialism? Chhatrapati Shivaji Terminus to you. Did you fly in through Chhatrapati Shivaji International Airport? Probably. These hollow acts of renaming are all carried out by political figures (particularly those of the Hindu nationalist variety) determined to undermine the civic achievements of colonialists and to retroactively prop up Shivaji as the freedom-fighting hero of the past. The proposed statue is the next step in this game of superficial cultural reclamation, and this context complicates the memorial’s intention. Is it an innocent celebration of Shivaji’s—and India’s—fight for independence, or does it index, and add to, the religious tension that has plagued the country since its inception?

Every country needs its share of memorials, its tourism, and its sources of pride. But one has to wonder: is the opportunity cost of the Statue of Unity or the Shivaji statue simply too high? The price of the Sardar Patel project, which has already begun construction, is INR 2989 crore (US $470 million); the Shivaji project, which has not yet broken ground, has been allocated INR 400 crore (US $64 million), a number that will have to treble in size in order to see the project to its completion. India struggles with most of the problems of a developing nation: abysmal education, healthcare, infrastructure, and women’s safety. Over half the country’s people do not have access to a toilet. If Indian politicians are concerned with image, devoting additional resources to these issues could be a more useful and meaningful way of establishing their own legacy, without having to contest those that preceded it.

The tenth day of the Hindu festival Navratri is called Dussehra, and it celebrates the mythological tale of Lord Rama’s defeat of the ten-headed demon Ravana. The festival is celebrated through a performed act of erasure: the demon’s ten heads represent ten bad qualities, similar to Western mythology’s deadly sins, that must be removed from the Hindu household. This is done by prayer, or, in many parts around India, by communally burning a monumental effigy of Ravana. As Ravana goes up in flames once a year, its plumes of smoke fill the air, translating the straw monument from its impressive stature to a transient state, a memory. While people often build monuments for posterity, so that future generations can use them as indexes of pasts they weren’t alive to witness, the Ravana statue represents an ideology in the opposite way. It takes the antagonist of mythological history, and deals with it in a way that is cathartic, a moment of violent cleansing.

Architect and theorist Rem Koolhaas believes in the need for destruction, the burning of Ravana and the tearing down of the Berlin Wall. In a curatorial statement at the Venice Architecture Biennale, he said: “The march of preservation necessitates the development of a theory of its opposite: not what to keep, but what to give up, what to erase and abandon. A system of phased demolition, for instance, would drop the unconvincing pretense of permanence for contemporary architecture, built under different economic and material assumptions. It would reveal the tabula rasa beneath the thinning crust of our civilization—ready for liberation just as we (in the West) had given up on the idea.” The constant renaming of British monuments around India—and forceful swapping of them with local heroes—doesn’t erase history in the Orwellian way it intends to, as these relics of the past, and the past itself, still remain visible. If the new Indian memorials are intended as acts of obliteration, maybe the government should instead take a wrecking ball to the Gateway of India for their point to be taken more seriously.

The Shivaji Statue understandably became the subject of debate—the Union Environment Ministry has expressed concern about the environmental impact of the project, whose location on a manmade island in the Arabian Sea may not be able to sustain its massive scale. But recently, the same body of authority turned around to assist the project in a puzzling and quintessentially Indian way: if you can’t obey the law, change it. On January 22, the ministry issued an amendment to the coastal zone regulations to conveniently allow “reclamation for construction of memorials/monuments and allied facilities, only in exceptional cases, by the state government concerned, on a case to case basis.” This legal tweak will make it much easier to construct the Shivaji statue, and in doing so, spoil the view of the city’s back bay, and continue to tout the greatness of an emperor that has no relevance in most of the lives of Bombay’s diverse population. While it would be nice to trust in Indian bureaucracy to impede the progress of the memorial indefinitely, it is important—and terrifying—to remember that the red tape need not apply to those who control it. Bombay may soon have its own Colossus, boldly standing for a false fragment of its past.

MAYA SORABJEE B’16 was exiled to the local zoo.