We want you. Yeah, you, the one in the jersey.

I couldn’t figure out why, but every fall, as financial institutions flock to campuses across the country for recruitment, emails filled the inboxes of student-athletes requesting their physically fit presences. The dozens of emails I received all started the same way: “Hi Bob,” the informality suggesting years of previous correspondence with Brown’s Associate Athletic Director. One email from Barclays even offered to “hold a special athlete-focused ‘Role of the Analyst Panel’” and specified that “the recruiting team remains very interested in student-athlete candidates.” This trend is seen at other schools across the country, both private and public. Of the 11 graduating seniors for the 2006 Duke lacrosse team, nine went on to work in finance. A 2013 Bloomberg article interviewed athletes from University of Virginia and Penn State who are now on Wall Street. Evidently, hand eye coordination is a desirable quality for finace.

This relationship between Wall Street and college sports programs has become so institutionalized that coaches now use it in recruiting pitches to high schoolers, boasting about former players at top firms. “The coaches told me and my parents about all of the past players that now work at places like Goldman and JP Morgan, and how they come back year after year to help us out,” a Brown student athlete who wished to remain anonymous told The Indy. My experience in high school was the same: coaches knew I wasn’t ever going to make money playing basketball, so their recruitment spiel almost always included a reference to the network of past players in high paying professions, which always included major financial institutions, as well consulting firms and large tech companies.

The choice to play college sports can seem absurd. Student-athletes give up the freedom to choose classes, the ability to join organizations, the time to study, the energy to be social, and, ultimately, few will be able to monetize their athletic chops. But this network of former-athletes-turned-bankers can be the deciding factor for some athletes when considering where and even whether to play a college sport. “My grades weren’t great, and I was thinking about quitting. But when I told my coach, he said that the connections I’d make sticking it out on the team were more important than a couple more A’s,” the same athlete said.

It’s clear why student-athletes would be interested in banks—assumedly for the same reasons that led 50 percent of Harvard’s 2008 graduating class to take jobs on Wall Street, the same year as the collapse. Money, prestige, marketability, training. But why would banks target student-athletes? Are they better at financial models, or do they have a more thorough grasp of macroeconomic trends? With billions of dollars on the line, there must be a reason.

A special breed of what?

Carly Drum-O’Neill, the head of a New York recruiting team dedicated solely to connecting student-athletes with Wall Street firms, made the following argument in an interview with Bloomberg: “Entry level people coming out of school who are athletes are really a special breed... [athletes] understand team play, time management, the competitiveness.” This sentiment is echoed by “The Value of College Sports,” an article on the National Collegiate Athletic Association (NCAA) website. Along with values like “A College Education,” “Scholarships,” and “Healthy Living,” the last on the list is “Preparation for life.” Underneath, the following paragraph: “Increasingly, the business world is focusing on creating a team environment with employees, as evidenced by constant discussion of teamwork in publications like the Harvard Business Review. By competing in college sports, student-athletes learn important skills, like leadership, time management, and how to effectively work with others toward a common goal. Companies have specifically said that they seek to hire former student-athletes, and the majority of student-athletes say that participating in college sports prepares them for life after graduation.”

This logic seems reasonable in a profession that is known for long hours and a high dropout rate: student-athletes balance a 40-hour a week practice schedule with classes, work as part of a team, compete nationally. But these experiences aren’t just found on the court or field. An editor of a paper or journal, a star in a play, a member of a research project: all of these students seem to be of the same “breed,” embody the same qualities. They work with others, balance time intensive priorities, and strive to be the best. But the Barclay’s email rings loudly: “the recruiting team remains very interested in student-athlete candidates.” 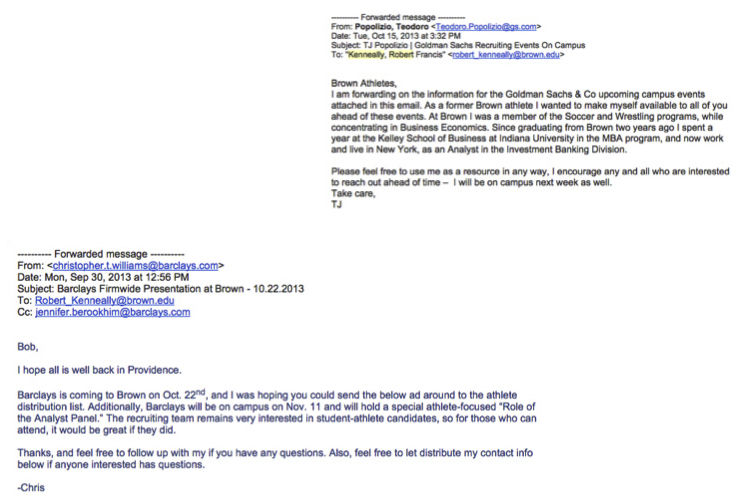 Of course, anything you say.

The question, then, isn’t what qualities athletes possess by nature of being athletes, but what qualities they possess that non-athletes don’t. Keith Murnighan, a Professor of Management and Organization at Northwestern University’s Kellogg School of Management, told Bloomberg in a recent interview, “[Banks are] hiring smart athletes—people who are disciplined, used to taking direction but able to take initiative.” It’s this last part that is most striking: used to taking direction. In an interview with The Indy, Brandon, a first year analyst in Investment Banking at a major financial firm, described the work culture: “You do what’s asked of you, no questions asked. As an analyst, you have to do what anybody senior tells you to do... Once, a director came in Friday night and put some work on my desk. I had a date with my girlfriend that I had to cancel.” Roger Jean Claessens, a consultant for the financial industry, wrote in his book Corporate Culture in Banking, “[banking culture is] quite hierarchical due to the need to generate reliable, predictable results... Control and accountability mechanisms were, and still are, valued as the key to success.”

Athletes are one of the few groups on campus who are socialized to willfully and quietly accept the demands of hierarchy in this way. “I had a midterm one Wednesday morning. Coach scheduled a 5:30AM practice. There was nothing I could do. I woke up and went,” another Brown athlete who wished to remain anonymous recalled. In high school, my basketball coach decided to mandate everyone on the team run a mile under six minutes. When I asked why we had to run a mile considering basketball is played in short sprints, he said, “Because I want you to.”

The rhetoric surrounding the natural fit of athletes in banking is accurate but incomplete. They do understand teamwork, time management, and the competitive spirit, but it’s always in reference to an authority figure. Athletes are part of coach’s team, manage their time on coach’s schedule, and compete on coach’s terms. They are socialized to acquiesce to authority, even when its commands seem unreasonable or incorrect, and this is perhaps their most marketable and unique quality.

After the 2008 crash, New York lawyer Jordan Thomas, who represents Wall Street whistleblowers, spoke about the failures of a culture in which young employees who sensed wrongdoing failed to speak up. “Many of these organizations lack a culture of integrity, where doing the right thing was the only thing that mattered and speaking up was encouraged,” he said. Instead, analysts quietly performed what was asked of them. “Mergers and Inquisitions,” a website about the financial industry, explained the role of young banking employees: “You’re a monkey, and your chief responsibility is to collect bananas for the bigger monkeys higher up in the food chain.” Too bad the bananas are the world economy. 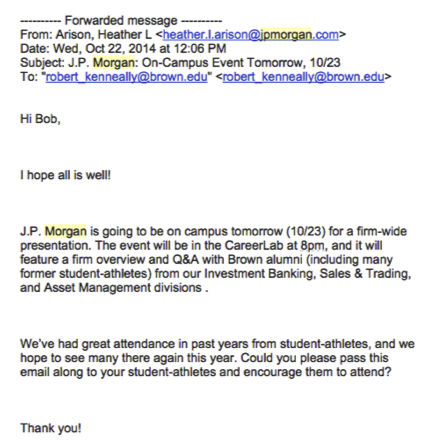